Once upon a time there was a little girl named Marian, and she had a doll called Big Mary. Marian loved Big Mary, and meant to be very good to her. But sometimes she was not.

Santa Claus had brought Big Mary one snowy Christmas night, and he had brought also a great many pretty clothes for her to wear. There were three dresses, a warm red one for winter, and a white one, very thin, for summer, and still another, of beautiful blue silk with lace on it, for best.

Then, also, there were little skirts, and tiny stockings, and pretty little shoes with shiny buckles and real heels, and there was a pink parasol, and, best of all, a dear little muff, made of soft white fur, to keep Big Mary’s hands warm in cold weather.

At first little Marian loved to dress Big Mary in all these pretty things, and she would put on first the warm red dress, and then the thin white one, and then the one of blue silk with the beautiful lace. And she would raise the big parasol and put it over Big Mary’s head. But she hardly ever gave Big Mary the little white muff to hold, because that was for very, very best. Little Marian’s own mamma had said so.

But when Marian’s birthday came, grandma gave her a doll’s trunk, and after that the days were not so pleasant for Big Mary. It was so much fun to pack the trunk that little Marian often took off all the clothes Big Mary had on to put them away in the trunk. Many a time poor Big Mary had to sit for hours all undressed, and she would shiver and shake, until at last one time when little Marian had left her lying all night on the floor without any clothes on, she took a dreadful cold and became very ill.

Then little Marian was very sorry for what she had done, and she put Big Mary to bed and sent for Dr. Prince. When the doctor came he looked at Big Mary’s tongue, and felt her pulse. And then he shook his head and looked very grave. He said that Big Mary must take some medicine every day, and must sit out in the fresh air, and always wear her best clothes all the time; for she was a very sick doll indeed.

So little Marian dressed Big Mary in the blue silk trimmed with lace, because that was her very best dress, and she raised the pink parasol and put it over her head and she gave Big Mary the white muff to hold, because that was for very, very best. Then she carried Big Mary out to the gray rock in the back yard where the nasturtiums grow, to sit in the fresh air all day long. 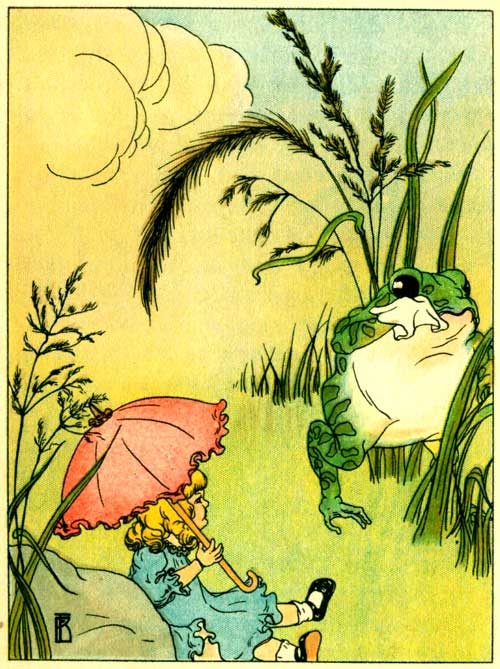 Now little Miss Freckle Frog lived under the big rock. She was ugly, as all frogs are, but she loved pretty things, perhaps because she was not pretty herself. But although she was not pretty, she was a kind-hearted little body, and all her friends liked her.

Every day when Big Mary sat in the sunshine, Freckle Frog crept out from under the rock, and hid in the grass, and watched her. She thought Big Mary was wonderful, but she thought that the blue silk dress and the pink parasol were more wonderful still, and the little soft muff,—that was the most wonderful of all! And poor little Freckle Frog wished that she had a blue silk dress with lace, and a pink parasol like Big Mary. But most of all she wished that she had a little soft muff.

Now it happened, too, that it was just about the time for Mr. Robin Redbreast to give his big party in the orchard, and little Freckle Frog had been invited, and more than that, her own cousin, Billy Bullfrog, had promised to sing, and of course she wished to look just as nice as she could.

So early one fine day, she went to see the Morning Glory Ladies who live near the back porch and always wear such beautiful dresses, and she said to them:

“Oh, dear Morning Glory Ladies, your dresses are always so beautiful! But have you seen Big Mary’s blue silk trimmed with lace? It is more beautiful still, the loveliest dress in the whole world! Would you mind making me one like that to wear to Robin Redbreast’s party? My cousin, Billy Bullfrog, is to sing, and I wish so very much to look just as nice as I can. I am not one bit pretty like Big Mary, but clothes always help a great deal, you know. Would you mind lending me one for the party?” 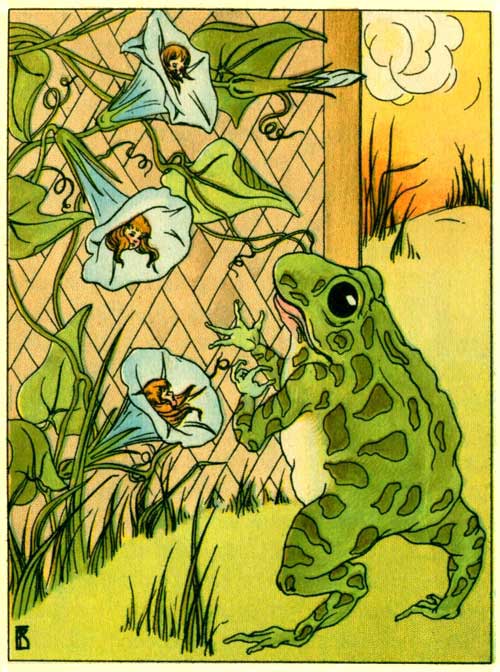 But the Morning Glory Ladies were angry because they had not been invited, and they would not help her.

Poor Little Freckle Frog felt very badly to think she had hurt their feelings. She almost cried about it. But just then Little Black Spider, who was a good friend of hers, peeped out from under a leaf and said:

“I wouldn’t mind them. They are a conceited lot anyway. It is a hot day, too, and they are apt to be cross on hot days. I will spin you all the lace you want.”

And so he did. He wove it all that day in his web, and the next morning he brought her a long piece of the loveliest spider-lace as fine as a cobweb. Little Freckle Frog was very grateful to him. 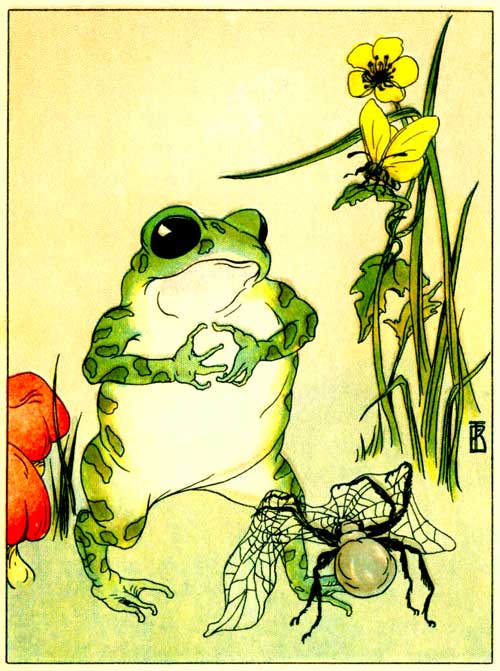 “But what shall I do for a parasol?” she asked.

“Oh, I’ll tell you!” called a soft little voice, and when she looked up she saw a tiny white butterfly resting on a flower.

“I know where there is the dearest little mushroom. It kept the rain off of me the other day, and it is just as soft and pink as Big Mary’s parasol.”

“Now if I only had a muff,” she sighed, “I could look just as beautiful as Big Mary at the party!”

Just then there was a great noise in the tree near the rock and Robin Redbreast himself flew out from among the leaves, but right at her feet dropped a little white caterpillar. He was so frightened that he curled himself up into a ball and lay very still. He made Big Mary laugh, but Freckle Frog had a bright idea.

“Oh what a splendid muff you would make!” she cried. “Would you mind if I wear you to the party just this once?”

The poor little caterpillar uncurled himself.

“If you will promise to take care of me and not let Robin Redbreast eat me,” he answered, “I shall be only too glad to be your muff.”

So Freckle Frog went to the party and wore the cobweb lace, and carried the mushroom parasol, and held the soft little white caterpillar for a muff. She even bought a sweet-pea bonnet to please the Morning Glory Ladies.

Then Robin Redbreast said she looked better than anybody else at his party, and Big Mary, who was well enough by that time to go also, said so, too. 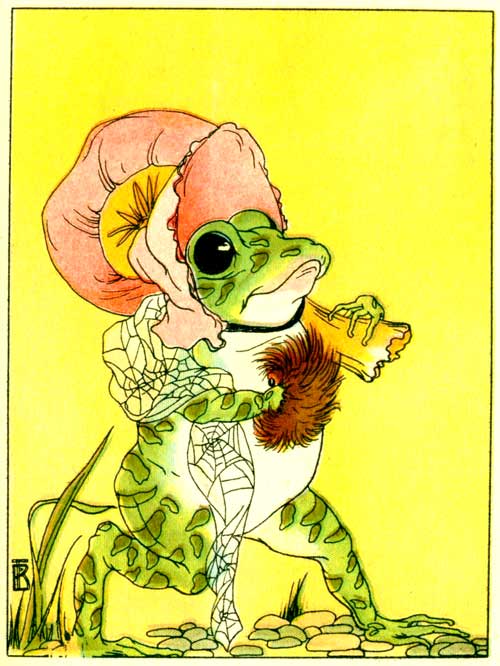 Now Robin Redbreast, as you must know, always had his parties just at twilight. He himself was always in better voice then, he said, and so he felt sure that Billy Bullfrog and all the other singers must be, too. Then the world was lovelier at that time than it was through the long, hot day, when sensible people like birds and frogs, and sometimes even babies and dolls, took naps and did not stir out at all. At twilight one could always depend upon the sky to grow very soft and pink, and the fairies never failed to hang the leaves with dewdrops, all to make his parties beautiful! The cherries tasted better then, too, and later still, when it began to grow dark, the katy-dids would play if any one cared to dance. So Robin Redbreast always gave beautiful parties, but even he had never given so beautiful a one before.

Little Freckle Frog was very happy. Every one admired her beautiful lace, and she told them all how kind Little Black Spider had been. And by and by, when it came to be time for refreshments, she ate a whole cherry. She never had tasted one before, but as she told Mr. Sparrow, who had brought it to her, she really never had dreamed how delicious a big red cherry could be. Then, when the katy-dids began to play, she danced with her cousin, Billy Bullfrog, until it was time to go home. 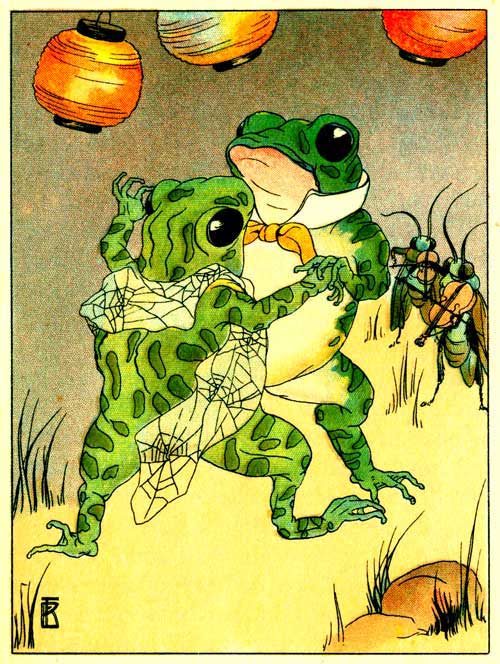 There was only one thing that troubled her, and that was that the Morning Glory Ladies were still angry with her. For Little Freckle Frog wanted to be friendly with everybody.

But at last another idea came into her head. She would give a party herself, just as beautiful a one as Robin Redbreast’s, and have it early in the morning so that the Morning Glory Ladies could come. 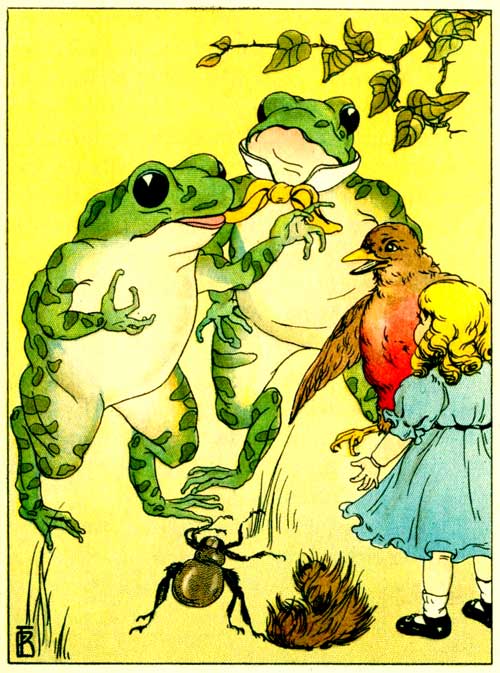 So that very evening, before she went home, she told Big Mary all about it, and Big Mary promised to help all she could. Robin Redbreast said that he would surely come, and so did Billy Bullfrog and all the rest. Freckle Frog invited Little Black Spider, too, and even the little white caterpillar. “And you needn’t be a muff this time,” she said, “but just eat cherries, and have a good time.”

Then, early the next morning, before any one else was up, she went to invite the Morning Glory Ladies, for they are always good-natured then, and never frown and scowl at people until the sun is hot.

“Please, dear Morning Glory Ladies,” said Freckle Frog, “will you come to my party? I want you more than any one else.”

Then the Morning Glory Ladies fluttered with joy, for they loved parties, and they smiled and answered her: “Yes, indeed, we shall come, Little Freckle Frog, and wear our best dresses, too.”

Then at last Freckle Frog was perfectly happy, and she laughed to herself and said:

“It really doesn’t matter about my being pretty any more, for every one likes me now!”

Short story by Charlotte B. Herr

Header illustration adapted with thanks to Pixabay

1. Freckle Frog says she is not as pretty as Big Mary doll, but she has something very special about her anyway. What do you think it is?

2. Do you think it is more important to be pretty, or to be a good person?

3. Why do you think Freckle Frog’s friends helped her look so beautiful for the party?

4. Freckle Frog plans a party that the Morning Glory Ladies can come to. Can you think of a time when you did something kind for someone? How did you feel? How did the person you were being kind to, feel?

A Fish and a Gift