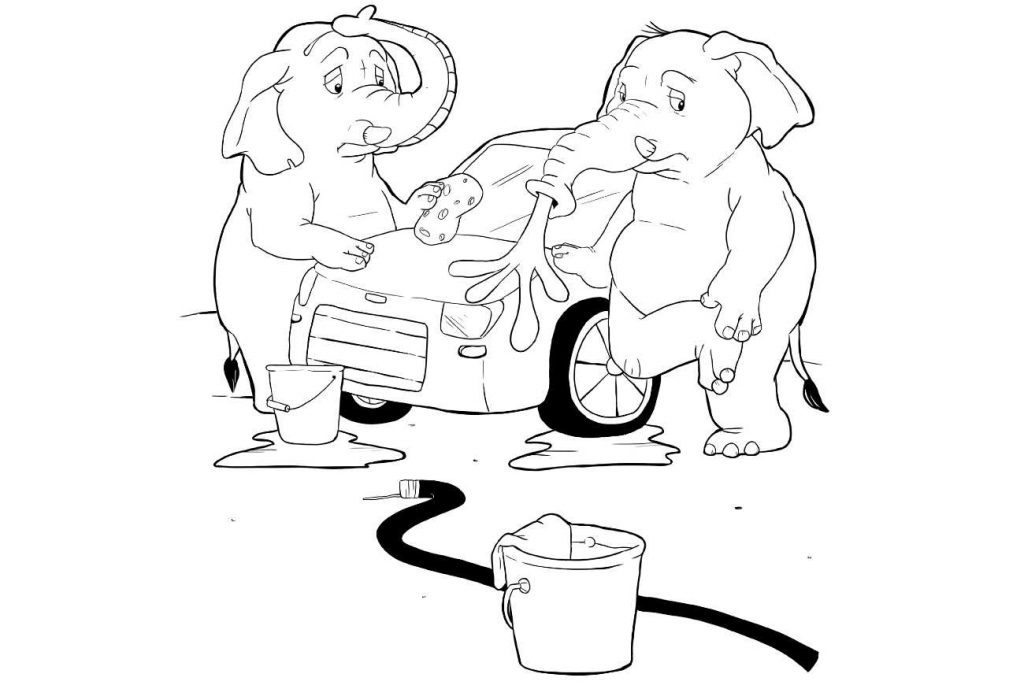 “Ethan, I don’t know how much longer I can do this.  My feet really hurt.”

“Yeah, so do mine, Sammy.  Maybe we should just live at the zoo like Uncle Carl. He gets fed well and just relaxes all day,” said Ethan.

“When I said I don’t know how much longer I can do this, I meant this job. I didn’t mean give up on our dream of being independent elephants.”

“Relax. I haven’t lost sight of that dream either, Sammy.  Look, I appreciated Mr. Dilley giving us a job at his carwash, but using my trunk as a water hose isn’t how I want to spend my days.”

“I know, I know, I’ve heard this story a thousand times. You want to be a chef more than anything else on Earth,” said Ethan.

“That’s right, a chef,” said Sammy. “But that’s never going to happen, because nobody wants to eat food cooked by an elephant.”

“You just haven’t found the right restaurant yet,” said Ethan. “Don’t give up, Sammy. Somebody will give you a job eventually.”

“I agree. It doesn’t make sense,” said Ethan. “It’s not worth getting upset over though, Sammy. They obviously don’t know what they’re talking about, since they don’t even serve peanut butter stew.”

“Thanks, Ethan.  I’m just tired of waiting for someone else to give me a chance. So first thing tomorrow morning I am going to the bank for a loan. We’ll just open up our own place.  And every customer that walks through the door will be treated with respect.  And I mean every customer – little boys and girls, grown-ups, puppy dogs, elephants, even a tiger if he’s willing to behave himself.”

“Can I be the one who greets them at the door with a song?” asked Ethan. “I’ve always dreamed of being a singer.”

“Absolutely,” said Sammy. “I’ll make the stew and you can sing your heart out to all the customers.”

Ethan took the sponge he had been using to wipe down a little blue car and pretended it was a microphone. To the surprise of Sammy and the man sitting in the little blue car, Ethan began to sing:

Because we’ve got better things to do,

“That’s great. That’s wonderful,” said the man in the little blue car. “But until then, can you please get the suds off my car?”

Ethan and Sammy finished washing the little blue car as the man requested and smiled the whole time they cleaned it. Even with sore feet it was easy for them to smile now, because they knew their dreams were going to come true. Their days of working at the car wash would be over soon. Or so it seemed.

Mr. Dilley had been paying Ethan and Sammy with peanuts, which they felt was the only good thing about working at the car wash. But when Sammy tried to use several bags of peanuts at the bank, he was informed he would have to shell out something else: money. 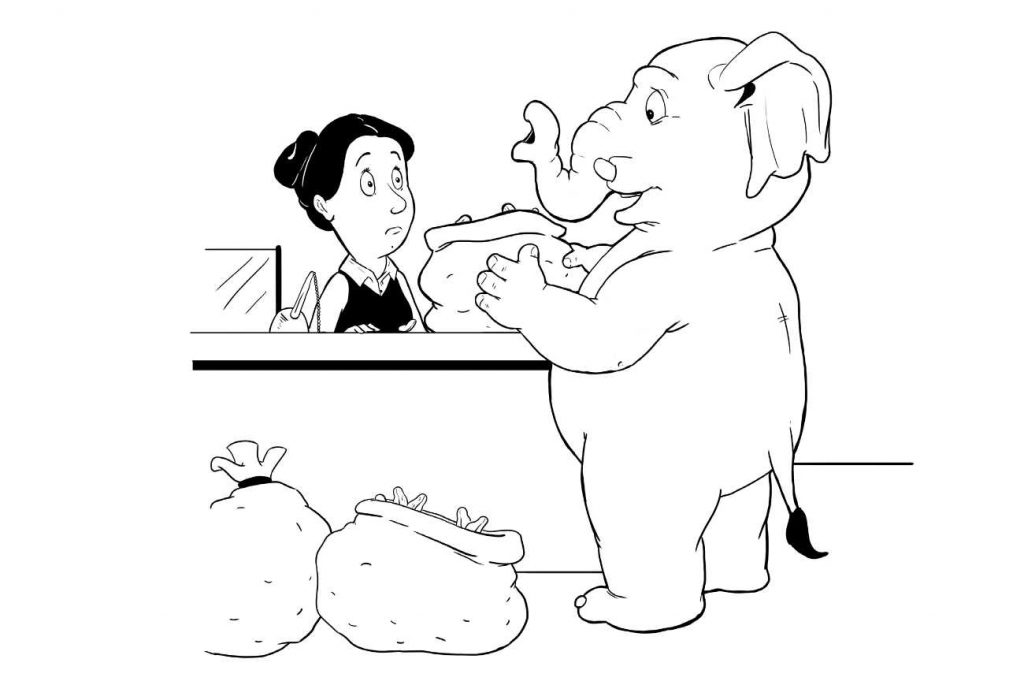 Sammy was heartbroken. He and Ethan didn’t have one nickel between them, and the cost of starting up a restaurant was more than Sammy ever imagined. He didn’t know how he was going to explain this to Ethan when he got back.  But Sammy didn’t have to say anything – the sad look on his face spoke a thousand words.

“It’s all right, Sammy,” said Ethan. “We’ll figure something out.”

Sammy just nodded, as a little tear rolled down his cheek.

A good thing happened the next morning, though. Mr. Dilley agreed to start paying Ethan and Sammy with money, not just peanuts.  But the job paid very little, and if they saved every penny they made between them it would take a very, very, long time to afford a restaurant of their own.

Ethan and Sammy tried to keep their spirits up, but it was tough.  Days turned into weeks, and weeks turned into months, and Sammy still couldn’t find anyone willing to give him a loan for his restaurant.

For a while it seemed as though Ethan and Sammy would spend the rest of their lives working at the car wash, until something unexpected happened.  Something wonderful!

While hosing down a car one afternoon, Ethan and Sammy abruptly stopped what they were doing when the sound of bells and music filled the air.

“Beats me, but it sounds like it’s getting closer,” said Ethan. “Let’s go take a look.”

Ethan and Sammy walked to the front of the car wash and were surprised to see a big, orange truck in the parking lot.  The big orange truck was playing music and had bells that chimed repeatedly. Several people walked up to the truck and began speaking to a man who stood inside it. Everyone was smiling and looked very happy.

“What? You’ve got to be kidding me!  That man is selling ice-cream to people from his truck,” said Sammy. “What a brilliant idea.  Don’t wait for your customers to come to you – go out and find them!”

“And he is playing music for them,” said Ethan. “Are you thinking what I’m thinking, Sammy?”

“Yeah, how does he keep the ice-cream from melting?”

“No, that’s not what I was thinking,” said Ethan, shaking his head. “I am sure there’s a freezer on the truck, Sammy. I’m talking about us, silly. A truck should be a lot less expensive than a restaurant. Why don’t we start our own business by renting a truck, and just go out and find our customers like the man with the ice-cream?”

Sammy didn’t say a word, but smiled from ear to floppy ear. He knew right then and there that his life was going to change. And it did. After a pay raise and a couple more months of working at the car wash, Ethan and Sammy went to the bank and got the loan they needed to start their business. They had the words “Stew and Tunes” written on the side of their truck. It took awhile to catch on, but eventually the whole town of Belvar fell in love with Sammy’s peanut butter stew.

Unlike the big orange truck that delivered ice-cream, bells didn’t chime on Ethan and Sammy’s truck, but there was plenty of music to be sure. And everyone in Belvar knew the truck was close by when they heard Ethan sing:

Because we’ve got better things to do, 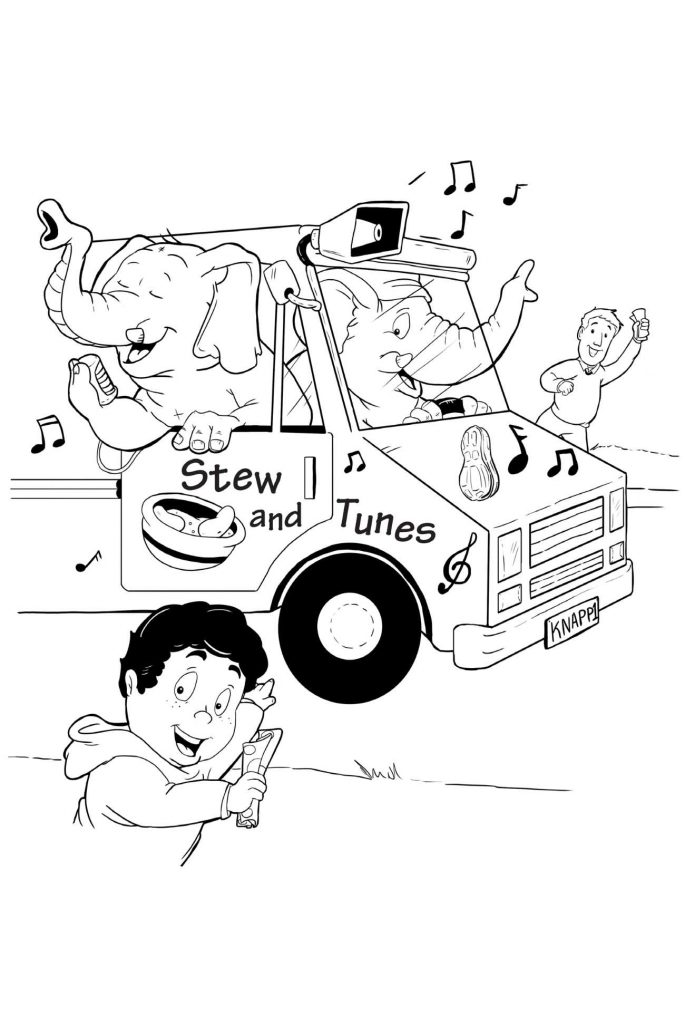 1. The two elephants in this story have a big dream. But it’s hard to get. Does this stop them from trying to realise their dream?

2. What do you think this story says about following your dreams?

3. Do you have any big dreams? What are they!

The Stars in the Sky

The Fair With Golden Hair