Fire Eater sneezes and forgives Pinocchio, who saves his friend, Harlequin, from death.

In the theater, great excitement reigned.

Fire Eater (this was really his name) was very ugly, but he was far from being as bad as he looked. Proof of this is that, when he saw the poor Marionette being brought in to him, struggling with fear and crying, “I don’t want to die! I don’t want to die!” he felt sorry for him and began first to waver and then to weaken. Finally, he could control himself no longer and gave a loud sneeze.

At that sneeze, Harlequin, who until then had been as sad as a weeping willow, smiled happily and leaning toward the Marionette, whispered to him:

“Good news, brother mine! Fire Eater has sneezed and this is a sign that he feels sorry for you. You are saved!”

For be it known, that, while other people, when sad and sorrowful, weep and wipe their eyes, Fire Eater, on the other hand, had the strange habit of sneezing each time he felt unhappy. The way was just as good as any other to show the kindness of his heart.

After sneezing, Fire Eater, ugly as ever, cried to Pinocchio:

“Stop crying! Your wails give me a funny feeling down here in my stomach and—E—tchee!—E—tchee!” Two loud sneezes finished his speech.

“Thanks! Are your father and mother still living?” demanded Fire Eater.

“My father, yes. My mother I have never known.”

“Thanks! However, I ought to be sorry for myself, too, just now. My good dinner is spoiled. I have no more wood for the fire, and the lamb is only half cooked. Never mind! In your place I’ll burn some other Marionette. Hey there! Officers!”

At the call, two wooden officers appeared, long and thin as a yard of rope, with queer hats on their heads and swords in their hands.

Fire Eater yelled at them in a hoarse voice:

“Take Harlequin, tie him, and throw him on the fire. I want my lamb well done!”

Think how poor Harlequin felt! He was so scared that his legs doubled up under him and he fell to the floor.

Pinocchio, at that heartbreaking sight, threw himself at the feet of Fire Eater and, weeping bitterly, asked in a pitiful voice which could scarcely be heard:

“There are no signori here!”

“There are no sirs here!”

“Have pity, your Excellency!”

On hearing himself addressed as your Excellency, the Director of the Marionette Theater sat up very straight in his chair, stroked his long beard, and becoming suddenly kind and compassionate, smiled proudly as he said to Pinocchio:

“Well, what do you want from me now, Marionette?”

“I beg for mercy for my poor friend, Harlequin, who has never done the least harm in his life.”

“There is no mercy here, Pinocchio. I have spared you. Harlequin must burn in your place. I am hungry and my dinner must be cooked.”

“In that case,” said Pinocchio proudly, as he stood up and flung away his cap of dough, “in that case, my duty is clear. Come, officers! Tie me up and throw me on those flames. No, it is not fair for poor Harlequin, the best friend that I have in the world, to die in my place!”

These brave words, said in a piercing voice, made all the other Marionettes cry. Even the officers, who were made of wood also, cried like two babies.

Fire Eater at first remained hard and cold as a piece of ice; but then, little by little, he softened and began to sneeze. And after four or five sneezes, he opened wide his arms and said to Pinocchio:

“You are a brave boy! Come to my arms and kiss me!”

Pinocchio ran to him and scurrying like a squirrel up the long black beard, he gave Fire Eater a loving kiss on the tip of his nose.

“Has pardon been granted to me?” asked poor Harlequin with a voice that was hardly a breath.

“Pardon is yours!” answered Fire Eater; and sighing and wagging his head, he added: “Well, tonight I shall have to eat my lamb only half cooked, but beware the next time, Marionettes.”

At the news that pardon had been given, the Marionettes ran to the stage and, turning on all the lights, they danced and sang till dawn. 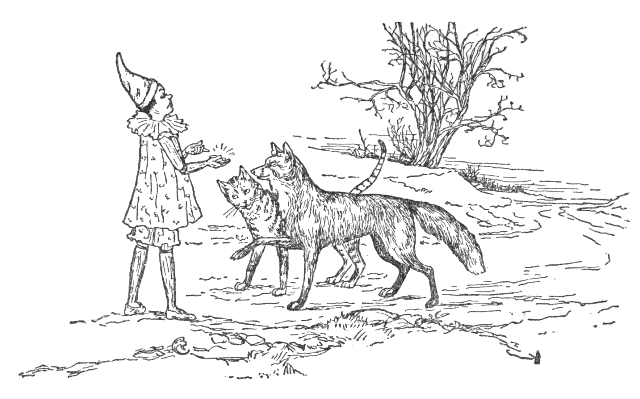 The Wonderful Wizard of Oz – Chapter 9