Pinocchio eats sugar, but refuses to take medicine. When the undertakers come for him, he drinks the medicine and feels better. Afterwards he tells a lie and, in punishment, his nose grows longer and longer.

As soon as the three doctors had left the room, the Fairy went to Pinocchio’s bed and, touching him on the forehead, noticed that he was burning with fever.

She took a glass of water, put a white powder into it, and, handing it to the Marionette, said lovingly to him:

“Drink this, and in a few days you’ll be up and well.”

Pinocchio looked at the glass, made a wry face, and asked in a whining voice: “Is it sweet or bitter?”

“Drink it and I’ll give you a lump of sugar to take the bitter taste from your mouth.”

“Here it is,” said the Fairy, taking a lump from a golden sugar bowl.

“I want the sugar first, then I’ll drink the bitter water.”

The Fairy gave him the sugar and Pinocchio, after chewing and swallowing it in a twinkling, said, smacking his lips:

“If only sugar were medicine! I should take it every day.”

“Now keep your promise and drink these few drops of water. They’ll be good for you.”

“It is too bitter, much too bitter! I can’t drink it.”

“How do you know, when you haven’t even tasted it?”

“I can imagine it. I smell it. I want another lump of sugar, then I’ll drink it.”

The Fairy, with all the patience of a good mother, gave him more sugar and again handed him the glass.

“I can’t drink it like that,” the Marionette said, making more wry faces.

“Because that feather pillow on my feet bothers me.”

The Fairy took away the pillow.

“I don’t like the way that door looks. It’s half open.”

The Fairy closed the door.

“You are very sick.”

“In a few hours the fever will take you far away to another world.”

“Aren’t you afraid of death?”

“Not a bit. I’d rather die than drink that awful medicine.”

At that moment, the door of the room flew open and in came four Rabbits as black as ink, carrying a small black coffin on their shoulders. 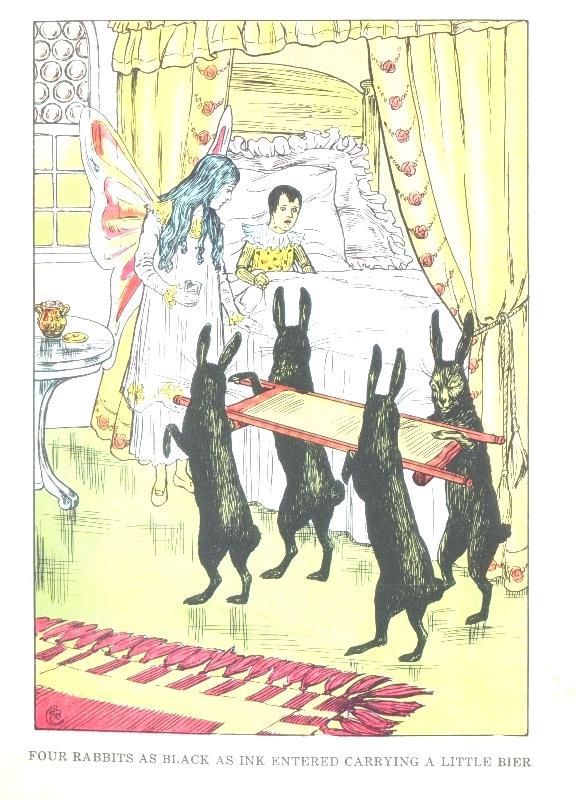 “What do you want from me?” asked Pinocchio.

“We have come for you,” said the largest Rabbit.

“No, not dead yet; but you will be in a few moments since you have refused to take the medicine which would have made you well.”

And holding the glass with his two hands, he swallowed the medicine at one gulp.

“Well,” said the four Rabbits, “this time we have made the trip for nothing.”

And turning on their heels, they marched solemnly out of the room, carrying their little black coffin and muttering and grumbling between their teeth.

In a twinkling, Pinocchio felt fine. With one leap he was out of bed and into his clothes. The Fairy, seeing him run and jump around the room gay as a bird on wing, said to him:

“My medicine was good for you, after all, wasn’t it?”

“Good indeed! It has given me new life.”

“Why, then, did I have to beg you so hard to make you drink it?”

“I’m a boy, you see, and all boys hate medicine more than they do sickness.”

“What a shame! Boys ought to know, after all, that medicine, taken in time, can save them from much pain and even from death.”

“Next time I won’t have to be begged so hard. I’ll remember those black Rabbits with the black coffin on their shoulders and I’ll take the glass and pouf!—down it will go!”

“Come here now and tell me how it came about that you found yourself in the hands of the Assassins.”

“It happened that Fire Eater gave me five gold pieces to give to my Father, but on the way, I met a Fox and a Cat, who asked me, ‘Do you want the five pieces to become two thousand?’ And I said, ‘Yes.’ And they said, ‘Come with us to the Field of Wonders.’ And I said, ‘Let’s go.’ Then they said, ‘Let us stop at the Inn of the Red Lobster for dinner and after midnight we’ll set out again.’ We ate and went to sleep. When I awoke they were gone and I started out in the darkness all alone. On the road I met two Assassins dressed in black coal sacks, who said to me, ‘Your money or your life!’ and I said, ‘I haven’t any money’; for, you see, I had put the money under my tongue. One of them tried to put his hand in my mouth and I bit it off and spat it out; but it wasn’t a hand, it was a cat’s paw. And they ran after me and I ran and ran, till at last they caught me and tied my neck with a rope and hanged me to a tree, saying, ‘Tomorrow we’ll come back for you and you’ll be dead and your mouth will be open, and then we’ll take the gold pieces that you have hidden under your tongue.'”

“Where are the gold pieces now?” the Fairy asked.

“I lost them,” answered Pinocchio, but he told a lie, for he had them in his pocket. As he spoke, his nose, long though it was, became at least two inches longer.

“And where did you lose them?”

At this second lie, his nose grew a few more inches.

“If you lost them in the near-by wood,” said the Fairy, “we’ll look for them and find them, for everything that is lost there is always found.”

“Ah, now I remember,” replied the Marionette, becoming more and more confused. “I did not lose the gold pieces, but I swallowed them when I drank the medicine.”

At this third lie, his nose became longer than ever, so long that he could not even turn around. If he turned to the right, he knocked it against the bed or into the windowpanes; if he turned to the left, he struck the walls or the door; if he raised it a bit, he almost put the Fairy’s eyes out.

The Fairy sat looking at him and laughing.

“Why do you laugh?” the Marionette asked her, worried now at the sight of his growing nose.

“I am laughing at your lies.”

“Lies, my boy, are known in a moment. There are two kinds of lies, lies with short legs and lies with long noses. Yours, just now, happen to have long noses.”

Pinocchio, not knowing where to hide his shame, tried to escape from the room, but his nose had become so long that he could not get it out of the door.