Freed from prison, Pinocchio sets out to return to the Fairy; but on the way he meets a Serpent and later is caught in a trap.

Fancy the happiness of Pinocchio on finding himself free! Without saying yes or no, he fled from the city and set out on the road that was to take him back to the house of the lovely Fairy.

It had rained for many days, and the road was so muddy that, at times, Pinocchio sank down almost to his knees.

But he kept on bravely.

Tormented by the wish to see his father and his fairy sister with azure hair, he raced like a greyhound. As he ran, he was splashed with mud even up to his cap.

“How unhappy I have been,” he said to himself. “And yet I deserve everything, for I am certainly very stubborn and stupid! I will always have my own way. I won’t listen to those who love me and who have more brains than I. But from now on, I’ll be different and I’ll try to become a most obedient boy. I have found out, beyond any doubt whatever, that disobedient boys are certainly far from happy, and that, in the long run, they always lose out. I wonder if Father is waiting for me. Will I find him at the Fairy’s house? It is so long, poor man, since I have seen him, and I do so want his love and his kisses. And will the Fairy ever forgive me for all I have done? She who has been so good to me and to whom I owe my life! Can there be a worse or more heartless boy than I am anywhere?”

As he spoke, he stopped suddenly, frozen with terror.

What was the matter? An immense Serpent lay stretched across the road—a Serpent with a bright green skin, fiery eyes which glowed and burned, and a pointed tail that smoked like a chimney. 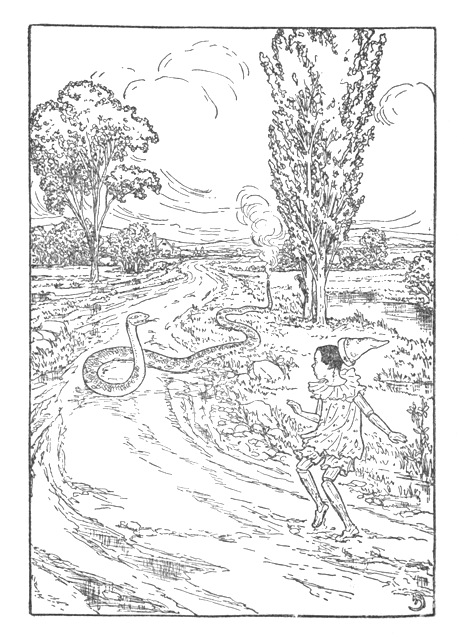 How frightened was poor Pinocchio! He ran back wildly for half a mile, and at last settled himself atop a heap of stones to wait for the Serpent to go on his way and leave the road clear for him.

He waited an hour; two hours; three hours; but the Serpent was always there, and even from afar one could see the flash of his red eyes and the column of smoke which rose from his long, pointed tail.

Pinocchio, trying to feel very brave, walked straight up to him and said in a sweet, soothing voice:

“I beg your pardon, Mr. Serpent, would you be so kind as to step aside to let me pass?”

He might as well have talked to a wall. The Serpent never moved.

Once more, in the same sweet voice, he spoke:

“You must know, Mr. Serpent, that I am going home where my father is waiting for me. It is so long since I have seen him! Would you mind very much if I passed?”

He waited for some sign of an answer to his questions, but the answer did not come. On the contrary, the green Serpent, who had seemed, until then, wide awake and full of life, became suddenly very quiet and still. His eyes closed and his tail stopped smoking.

“Is he dead, I wonder?” said Pinocchio, rubbing his hands together happily. Without a moment’s hesitation, he started to step over him, but he had just raised one leg when the Serpent shot up like a spring and the Marionette fell head over heels backward. He fell so awkwardly that his head stuck in the mud, and there he stood with his legs straight up in the air.

At the sight of the Marionette kicking and squirming like a young whirlwind, the Serpent laughed so heartily and so long that at last he burst an artery and died on the spot.

Pinocchio freed himself from his awkward position and once more began to run in order to reach the Fairy’s house before dark. As he went, the pangs of hunger grew so strong that, unable to withstand them, he jumped into a field to pick a few grapes that tempted him. Woe to him!

No sooner had he reached the grapevine than—crack! went his legs.

The poor Marionette was caught in a trap set there by a Farmer for some Weasels which came every night to steal his chickens. 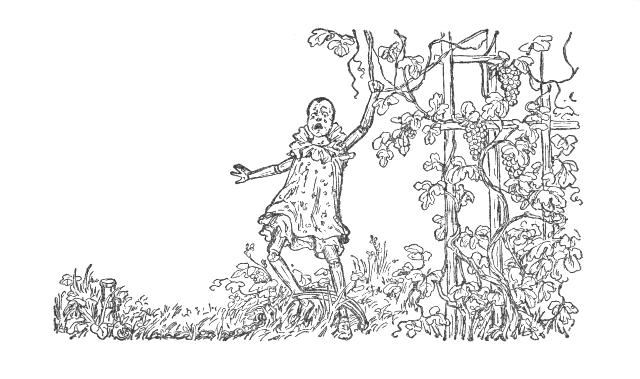 The Princess and the Goblin – Chapter 6