Pinocchio is caught by a Farmer, who uses him as a watchdog for his chicken coop.

Pinocchio, as you may well imagine, began to scream and weep and beg; but all was of no use, for no houses were to be seen and not a soul passed by on the road.

A little because of the sharp pain in his legs, a little because of fright at finding himself alone in the darkness of the field, the Marionette was about to faint, when he saw a tiny Glowworm flickering by. He called to her and said:

“Dear little Glowworm, will you set me free?”

“Poor little fellow!” replied the Glowworm, stopping to look at him with pity. “How came you to be caught in this trap?”

“Are the grapes yours?”

“Who has taught you to take things that do not belong to you?”

“Hunger, my boy, is no reason for taking something which belongs to another.”

Just then, the conversation was interrupted by approaching footsteps. It was the owner of the field, who was coming on tiptoes to see if, by chance, he had caught the Weasels which had been eating his chickens.

Great was his surprise when, on holding up his lantern, he saw that, instead of a Weasel, he had caught a boy!

“Ah, you little thief!” said the Farmer in an angry voice. “So you are the one who steals my chickens!”

“Not I! No, no!” cried Pinocchio, sobbing bitterly. “I came here only to take a very few grapes.”

“He who steals grapes may very easily steal chickens also. Take my word for it, I’ll give you a lesson that you’ll remember for a long while.”

He opened the trap, grabbed the Marionette by the collar, and carried him to the house as if he were a puppy. When he reached the yard in front of the house, he flung him to the ground, put a foot on his neck, and said to him roughly:

“It is late now and it’s time for bed. Tomorrow we’ll settle matters. In the meantime, since my watchdog died today, you may take his place and guard my henhouse.”

No sooner said than done. He slipped a dog collar around Pinocchio’s neck and tightened it so that it would not come off. A long iron chain was tied to the collar. The other end of the chain was nailed to the wall.

“If tonight it should happen to rain,” said the Farmer, “you can sleep in that little doghouse near-by, where you will find plenty of straw for a soft bed. It has been Melampo’s bed for three years, and it will be good enough for you. And if, by any chance, any thieves should come, be sure to bark!”

After this last warning, the Farmer went into the house and closed the door and barred it.

Poor Pinocchio huddled close to the doghouse more dead than alive from cold, hunger, and fright. Now and again he pulled and tugged at the collar which nearly choked him and cried out in a weak voice:

“I deserve it! Yes, I deserve it! I have been nothing but a truant and a vagabond. I have never obeyed anyone and I have always done as I pleased. If I were only like so many others and had studied and worked and stayed with my poor old father, I should not find myself here now, in this field and in the darkness, taking the place of a farmer’s watchdog. Oh, if I could start all over again! But what is done can’t be undone, and I must be patient!”

After this little sermon to himself, which came from the very depths of his heart, Pinocchio went into the doghouse and fell asleep. 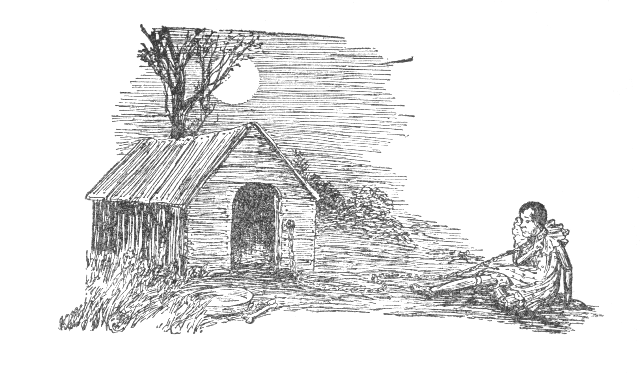 A Mouse’s Book of Scraps