Pinocchio weeps upon learning that the Lovely Maiden with Azure Hair is dead. He meets a Pigeon, who carries him to the seashore. He throws himself into the sea to go to the aid of his father.

As soon as Pinocchio no longer felt the shameful weight of the dog collar around his neck, he started to run across the fields and meadows, and never stopped till he came to the main road that was to take him to the Fairy’s house.

When he reached it, he looked into the valley far below him and there he saw the wood where unluckily he had met the Fox and the Cat, and the tall oak tree where he had been hanged; but though he searched far and near, he could not see the house where the Fairy with the Azure Hair lived.

He became terribly frightened and, running as fast as he could, he finally came to the spot where it had once stood. The little house was no longer there. In its place lay a small marble slab, which bore this sad inscription:

The poor Marionette was heartbroken at reading these words. He fell to the ground and, covering the cold marble with kisses, burst into bitter tears. He cried all night, and dawn found him still there, though his tears had dried and only hard, dry sobs shook his wooden frame. But these were so loud that they could be heard by the faraway hills.

As he sobbed he said to himself:

“Oh, my Fairy, my dear, dear Fairy, why did you die? Why did I not die, who am so bad, instead of you, who are so good? And my father—where can he be? Please dear Fairy, tell me where he is and I shall never, never leave him again! You are not really dead, are you? If you love me, you will come back, alive as before. Don’t you feel sorry for me? I’m so lonely. If the two Assassins come, they’ll hang me again from the giant oak tree and I will really die, this time. What shall I do alone in the world? Now that you are dead and my father is lost, where shall I eat? Where shall I sleep? Who will make my new clothes? Oh, I want to die! Yes, I want to die! Oh, oh, oh!”

Poor Pinocchio! He even tried to tear his hair, but as it was only painted on his wooden head, he could not even pull it.
Just then a large Pigeon flew far above him. Seeing the Marionette, he cried to him:

“Tell me, little boy, what are you doing there?”

“Can’t you see? I’m crying,” cried Pinocchio, lifting his head toward the voice and rubbing his eyes with his sleeve.

“Tell me,” asked the Pigeon, “do you by chance know of a Marionette, Pinocchio by name?”

“Pinocchio! Did you say Pinocchio?” replied the Marionette, jumping to his feet. “Why, I am Pinocchio!”

At this answer, the Pigeon flew swiftly down to the earth. He was much larger than a turkey.

“Then you know Geppetto also?”

“I left him three days ago on the shore of a large sea.”

“What was he doing?”

“He was building a little boat with which to cross the ocean. For the last four months, that poor man has been wandering around Europe, looking for you. Not having found you yet, he has made up his mind to look for you in the New World, far across the ocean.”

“How far is it from here to the shore?” asked Pinocchio anxiously.

“Fifty miles? Oh, dear Pigeon, how I wish I had your wings!”

“Astride my back. Are you very heavy?”

Saying nothing more, Pinocchio jumped on the Pigeon’s back and, as he settled himself, he cried out gayly:

“Gallop on, gallop on, my pretty steed! I’m in a great hurry.” 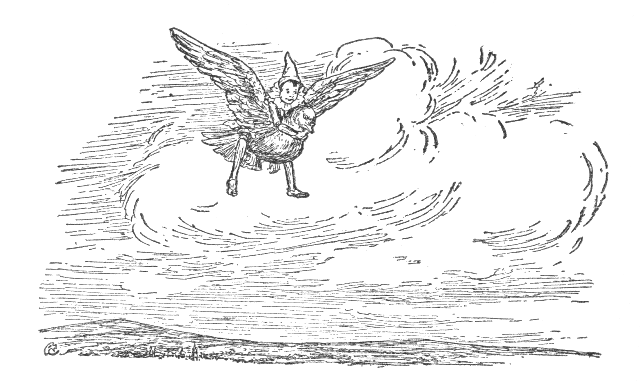 The Pigeon flew away, and in a few minutes he had reached the clouds. The Marionette looked to see what was below them. His head swam and he was so frightened that he clutched wildly at the Pigeon’s neck to keep himself from falling.
They flew all day. Toward evening the Pigeon said:

“Let us stop a few minutes at that pigeon coop down there. Then we can go on and be at the seashore in the morning.”

They went into the empty coop and there they found nothing but a bowl of water and a small basket filled with chick-peas.

The Marionette had always hated chick-peas. According to him, they had always made him sick; but that night he ate them with a relish. As he finished them, he turned to the Pigeon and said:

“I never should have thought that chick-peas could be so good!”

“You must remember, my boy,” answered the Pigeon, “that hunger is the best sauce!”

After resting a few minutes longer, they set out again. The next morning they were at the seashore.

Pinocchio jumped off the Pigeon’s back, and the Pigeon, not wanting any thanks for a kind deed, flew away swiftly and disappeared.

The shore was full of people, shrieking and tearing their hair as they looked toward the sea.

“What has happened?” asked Pinocchio of a little old woman.

“A poor old father lost his only son some time ago and today he built a tiny boat for himself in order to go in search of him across the ocean. The water is very rough and we’re afraid he will be drowned.”

“Where is the little boat?”

“There. Straight down there,” answered the little old woman, pointing to a tiny shadow, no bigger than a nutshell, floating on the sea.

Pinocchio looked closely for a few minutes and then gave a sharp cry:

Meanwhile, the little boat, tossed about by the angry waters, appeared and disappeared in the waves. And Pinocchio, standing on a high rock, tired out with searching, waved to him with hand and cap and even with his nose.

It looked as if Geppetto, though far away from the shore, recognized his son, for he took off his cap and waved also. He seemed to be trying to make everyone understand that he would come back if he were able, but the sea was so heavy that he could do nothing with his oars. Suddenly a huge wave came and the boat disappeared.

They waited and waited for it, but it was gone.

“Poor man!” said the fisher folk on the shore, whispering a prayer as they turned to go home.

Just then a desperate cry was heard. Turning around, the fisher folk saw Pinocchio dive into the sea and heard him cry out:

The Marionette, being made of wood, floated easily along and swam like a fish in the rough water. Now and again he disappeared only to reappear once more. In a twinkling, he was far away from land. At last he was completely lost to view. 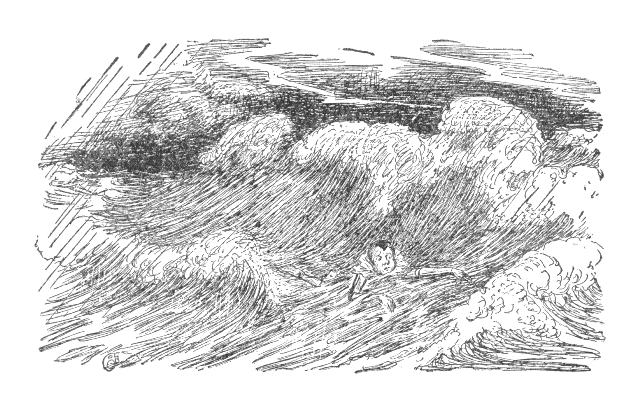 “Poor boy!” cried the fisher folk on the shore, and again they mumbled a few prayers, as they returned home.