Pinocchio reaches the Island of the Busy Bees and finds the Fairy once more.

Pinocchio, spurred on by the hope of finding his father and of being in time to save him, swam all night long.

And what a horrible night it was! It poured rain, it hailed, it thundered, and the lightning was so bright that it turned the night into day.

At dawn, he saw, not far away from him, a long stretch of sand. It was an island in the middle of the sea.

Pinocchio tried his best to get there, but he couldn’t. The waves played with him and tossed him about as if he were a twig or a bit of straw. At last, and luckily for him, a tremendous wave tossed him to the very spot where he wanted to be. The blow from the wave was so strong that, as he fell to the ground, his joints cracked and almost broke. But, nothing daunted, he jumped to his feet and cried:

“Once more I have escaped with my life!”

Little by little the sky cleared. The sun came out in full splendor and the sea became as calm as a lake.

Then the Marionette took off his clothes and laid them on the sand to dry. He looked over the waters to see whether he might catch sight of a boat with a little man in it. He searched and he searched, but he saw nothing except sea and sky and far away a few sails, so small that they might have been birds.

“If only I knew the name of this island!” he said to himself. “If I even knew what kind of people I would find here! But whom shall I ask? There is no one here.”

The idea of finding himself in so lonesome a spot made him so sad that he was about to cry, but just then he saw a big Fish swimming near-by, with his head far out of the water.

Not knowing what to call him, the Marionette said to him:

“Even two, if you want,” answered the fish, who happened to be a very polite Dolphin.

“Will you please tell me if, on this island, there are places where one may eat without necessarily being eaten?”

“Surely, there are,” answered the Dolphin. “In fact you’ll find one not far from this spot.”

“And how shall I get there?”

“Take that path on your left and follow your nose. You can’t go wrong.”

“Tell me another thing. You who travel day and night through the sea, did you not perhaps meet a little boat with my father in it?”

“And who is you father?”

“He is the best father in the world, even as I am the worst son that can be found.”

“In the storm of last night,” answered the Dolphin, “the little boat must have been swamped.”

“By this time, he must have been swallowed by the Terrible Shark, which, for the last few days, has been bringing terror to these waters.”

“Is this Shark very big?” asked Pinocchio, who was beginning to tremble with fright.

“Is he big?” replied the Dolphin. “Just to give you an idea of his size, let me tell you that he is larger than a five story building and that he has a mouth so big and so deep, that a whole train and engine could easily get into it.”

“Mother mine!” cried the Marionette, scared to death; and dressing himself as fast as he could, he turned to the Dolphin and said:

“Farewell, Mr. Fish. Pardon the bother, and many thanks for your kindness.”

This said, he took the path at so swift a gait that he seemed to fly, and at every small sound he heard, he turned in fear to see whether the Terrible Shark, five stories high and with a train in his mouth, was following him.

After walking a half hour, he came to a small country called the Land of the Busy Bees. The streets were filled with people running to and fro about their tasks. Everyone worked, everyone had something to do. Even if one were to search with a lantern, not one idle man or one tramp could have been found.

“I understand,” said Pinocchio at once wearily, “this is no place for me! I was not born for work.”

But in the meantime, he began to feel hungry, for it was twenty-four hours since he had eaten.

What was to be done?

There were only two means left to him in order to get a bite to eat. He had either to work or to beg.

He was ashamed to beg, because his father had always preached to him that begging should be done only by the sick or the old. He had said that the real poor in this world, deserving of our pity and help, were only those who, either through age or sickness, had lost the means of earning their bread with their own hands. All others should work, and if they didn’t, and went hungry, so much the worse for them.

Just then a man passed by, worn out and wet with perspiration, pulling, with difficulty, two heavy carts filled with coal.

Pinocchio looked at him and, judging him by his looks to be a kind man, said to him with eyes downcast in shame:

“Will you be so good as to give me a penny, for I am faint with hunger?”

“Not only one penny,” answered the Coal Man. “I’ll give you four if you will help me pull these two wagons.”

“I am surprised!” answered the Marionette, very much offended. “I wish you to know that I never have been a donkey, nor have I ever pulled a wagon.”

“So much the better for you!” answered the Coal Man. “Then, my boy, if you are really faint with hunger, eat two slices of your pride; and I hope they don’t give you indigestion.”

A few minutes after, a Bricklayer passed by, carrying a pail full of plaster on his shoulder.

“Good man, will you be kind enough to give a penny to a poor boy who is yawning from hunger?”

“Gladly,” answered the Bricklayer. “Come with me and carry some plaster, and instead of one penny, I’ll give you five.”

“But the plaster is heavy,” answered Pinocchio, “and the work too hard for me.”

“If the work is too hard for you, my boy, enjoy your yawns and may they bring you luck!”

In less than a half hour, at least twenty people passed and Pinocchio begged of each one, but they all answered:

“Aren’t you ashamed? Instead of being a beggar in the streets, why don’t you look for work and earn your own bread?”

“Good woman, will you allow me to have a drink from one of your jugs?” asked Pinocchio, who was burning up with thirst.

“With pleasure, my boy!” she answered, setting the two jugs on the ground before him.

When Pinocchio had had his fill, he grumbled, as he wiped his mouth:

“My thirst is gone. If I could only as easily get rid of my hunger!”

On hearing these words, the good little woman immediately said:

“If you help me to carry these jugs home, I’ll give you a slice of bread.”

Pinocchio looked at the jug and said neither yes nor no.

“And with the bread, I’ll give you a nice dish of cauliflower with white sauce on it.”

Pinocchio gave the jug another look and said neither yes nor no.

“And after the cauliflower, some cake and jam.”

At this last bribery, Pinocchio could no longer resist and said firmly:

“Very well. I’ll take the jug home for you.”

The jug was very heavy, and the Marionette, not being strong enough to carry it with his hands, had to put it on his head.

When they arrived home, the little woman made Pinocchio sit down at a small table and placed before him the bread, the cauliflower, and the cake. Pinocchio did not eat; he devoured. His stomach seemed a bottomless pit.

His hunger finally appeased, he raised his head to thank his kind benefactress. But he had not looked at her long when he gave a cry of surprise and sat there with his eyes wide open, his fork in the air, and his mouth filled with bread and cauliflower.

“Why all this surprise?” asked the good woman, laughing.

And Pinocchio threw himself on the floor and clasped the knees of the mysterious little woman. 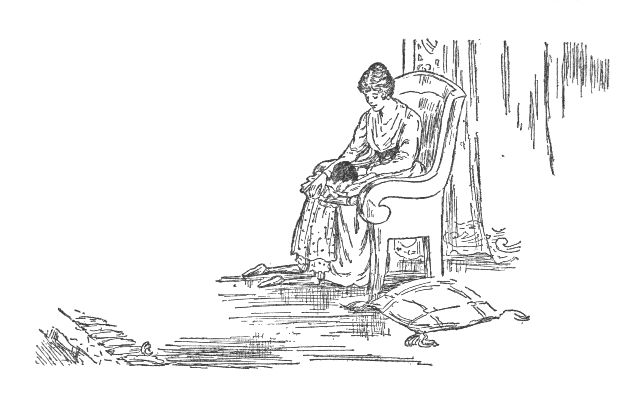 The Wonderful Wizard of Oz – Chapter 9

The Princess and the Goblin – Chapter 11

The Princess and the Goblin – Chapter 26