Little as Geppetto’s house was, it was neat and comfortable. It was a small room on the ground floor, with a tiny window under the stairway. The furniture could not have been much simpler: a very old chair, a rickety old bed, and a tumble-down table. A fireplace full of burning logs was painted on the wall opposite the door. Over the fire, there was painted a pot full of something which kept boiling happily away and sending up clouds of what looked like real steam.

As soon as he reached home, Geppetto took his tools and began to cut and shape the wood into a Marionette. 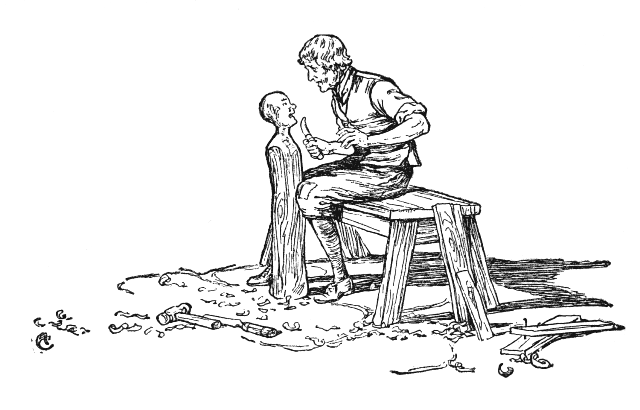 “What shall I call him?” he said to himself. “I think I’ll call him PINOCCHIO. This name will make his fortune. I knew a whole family of Pinocchi once—Pinocchio the father, Pinocchia the mother, and Pinocchi the children—and they were all lucky. The richest of them begged for his living.”

After choosing the name for his Marionette, Geppetto set seriously to work to make the hair, the forehead, the eyes. Fancy his surprise when he noticed that these eyes moved and then stared fixedly at him. Geppetto, seeing this, felt insulted and said in a grieved tone:

“Ugly wooden eyes, why do you stare so?”

There was no answer.

Poor Geppetto kept cutting it and cutting it, but the more he cut, the longer grew that impertinent nose. In despair he let it alone.

Next he made the mouth.

No sooner was it finished than it began to laugh and poke fun at him.

“Stop laughing!” said Geppetto angrily; but he might as well have spoken to the wall.

“Stop laughing, I say!” he roared in a voice of thunder.

The mouth stopped laughing, but it stuck out a long tongue.

Not wishing to start an argument, Geppetto made believe he saw nothing and went on with his work. After the mouth, he made the chin, then the neck, the shoulders, the stomach, the arms, and the hands.

As he was about to put the last touches on the finger tips, Geppetto felt his wig being pulled off. He glanced up and what did he see? His yellow wig was in the Marionette’s hand. “Pinocchio, give me my wig!”

But instead of giving it back, Pinocchio put it on his own head, which was half swallowed up in it.

At that unexpected trick, Geppetto became very sad and downcast, more so than he had ever been before.

“Pinocchio, you wicked boy!” he cried out. “You are not yet finished, and you start out by being impudent to your poor old father. Very bad, my son, very bad!”

And he wiped away a tear.

The legs and feet still had to be made. As soon as they were done, Geppetto felt a sharp kick on the tip of his nose.

“I deserve it!” he said to himself. “I should have thought of this before I made him. Now it’s too late!”

He took hold of the Marionette under the arms and put him on the floor to teach him to walk.

Pinocchio’s legs were so stiff that he could not move them, and Geppetto held his hand and showed him how to put out one foot after the other.

When his legs were limbered up, Pinocchio started walking by himself and ran all around the room. He came to the open door, and with one leap he was out into the street. Away he flew!

Poor Geppetto ran after him but was unable to catch him, for Pinocchio ran in leaps and bounds, his two wooden feet, as they beat on the stones of the street, making as much noise as twenty peasants in wooden shoes.

“Catch him! Catch him!” Geppetto kept shouting. But the people in the street, seeing a wooden Marionette running like the wind, stood still to stare and to laugh until they cried.

At last, by sheer luck, a Carabineer (a military policeman) happened along, who, hearing all that noise, thought that it might be a runaway colt, and stood bravely in the middle of the street, with legs wide apart, firmly resolved to stop it and prevent any trouble.

Pinocchio saw the Carabineer from afar and tried his best to escape between the legs of the big fellow, but without success.

The Carabineer grabbed him by the nose (it was an extremely long one and seemed made on purpose for that very thing) and returned him to Mastro Geppetto.

The little old man wanted to pull Pinocchio’s ears. Think how he felt when, upon searching for them, he discovered that he had forgotten to make them!

All he could do was to seize Pinocchio by the back of the neck and take him home. As he was doing so, he shook him two or three times and said to him angrily:

“We’re going home now. When we get home, then we’ll settle this matter!”

Pinocchio, on hearing this, threw himself on the ground and refused to take another step. One person after another gathered around the two.

Some said one thing, some another.

“Poor Marionette,” called out a man. “I am not surprised he doesn’t want to go home. Geppetto, no doubt, will beat him unmercifully, he is so mean and cruel!”

“Geppetto looks like a good man,” added another, “but with boys he’s a real tyrant. If we leave that poor Marionette in his hands he may tear him to pieces!”

They said so much that, finally, the Carabineer ended matters by setting Pinocchio at liberty and dragging Geppetto to prison. The poor old fellow did not know how to defend himself, but wept and wailed like a child and said between his sobs:

“Ungrateful boy! To think I tried so hard to make you a well-behaved Marionette! I deserve it, however! I should have given the matter more thought.”

What happened after this is an almost unbelievable story, but you may read it, dear children, in the chapters that follow.

The Princess and the Goblin – Chapter 15