Return to the Beginning of Pinocchio !

After five months of play, Pinocchio wakes up one fine morning and finds a great surprise awaiting him.

Finally the wagon arrived. It made no noise, for its wheels were bound with straw and rags.

It was drawn by twelve pair of donkeys, all of the same size, but all of different colour. Some were grey, others white, and still others a mixture of brown and black. Here and there were a few with large yellow and blue stripes.

The strangest thing of all was that those twenty-four donkeys, instead of being iron-shod like any other beast of burden, had on their feet laced shoes made of leather, just like the ones boys wear.

And the driver of the wagon?

Imagine to yourselves a little, fat man, much wider than he was long, round and shiny as a ball of butter, with a face beaming like an apple, a little mouth that always smiled, and a voice small and wheedling like that of a cat begging for food.

No sooner did any boy see him than he fell in love with him, and nothing satisfied him but to be allowed to ride in his wagon to that lovely place called the Land of Toys.

In fact the wagon was so closely packed with boys of all ages that it looked like a box of sardines. They were uncomfortable, they were piled one on top of the other, they could hardly breathe; yet not one word of complaint was heard. The thought that in a few hours they would reach a country where there were no schools, no books, no teachers, made these boys so happy that they felt neither hunger, nor thirst, nor sleep, nor discomfort.

No sooner had the wagon stopped than the little fat man turned to Lamp-Wick. With bows and smiles, he asked in a wheedling tone:

“Tell me, my fine boy, do you also want to come to my wonderful country?”

“But I warn you, my little dear, there’s no more room in the wagon. It is full.”

“Never mind,” answered Lamp-Wick. “If there’s no room inside, I can sit on the top of the coach.”

And with one leap, he perched himself there.

“What about you, my love?” asked the Little Man, turning politely to Pinocchio. “What are you going to do? Will you come with us, or do you stay here?”

“I stay here,” answered Pinocchio. “I want to return home, as I prefer to study and to succeed in life.”

“May that bring you luck!”

“Pinocchio!” Lamp-Wick called out. “Listen to me. Come with us and we’ll always be happy.”

“Come with us and we’ll always be happy,” cried four other voices from the wagon.

“Come with us and we’ll always be happy,” shouted the one hundred and more boys in the wagon, all together.

“And if I go with you, what will my good Fairy say?” asked the Marionette, who was beginning to waver and weaken in his good resolutions.

“Don’t worry so much. Only think that we are going to a land where we shall be allowed to make all the racket we like from morning till night.”

Pinocchio did not answer, but sighed deeply once—twice—a third time. Finally, he said:

“The seats are all filled,” answered the Little Man, “but to show you how much I think of you, take my place as coachman.”

“No, indeed. I could not permit such a thing. I much prefer riding one of these donkeys,” cried Pinocchio.

No sooner said than done. He approached the first donkey and tried to mount it. But the little animal turned suddenly and gave him such a terrible kick in the stomach that Pinocchio was thrown to the ground and fell with his legs in the air.

At this unlooked-for entertainment, the whole company of runaways laughed uproariously.

The little fat man did not laugh. He went up to the rebellious animal, and, still smiling, bent over him lovingly and bit off half of his right ear.

In the meantime, Pinocchio lifted himself up from the ground, and with one leap landed on the donkey’s back. The leap was so well taken that all the boys shouted,

“Hurrah for Pinocchio!” and clapped their hands in hearty applause.

Suddenly the little donkey gave a kick with his two hind feet and, at this unexpected move, the poor Marionette found himself once again sprawling right in the middle of the road.

Again the boys shouted with laughter. But the Little Man, instead of laughing, became so loving toward the little animal that, with another kiss, he bit off half of his left ear.

“You can mount now, my boy,” he then said to Pinocchio. “Have no fear. That donkey was worried about something, but I have spoken to him and now he seems quiet and reasonable.”

Pinocchio mounted and the wagon started on its way. While the donkeys galloped along the stony road, the Marionette fancied he heard a very quiet voice whispering to him:

“Poor silly! You have done as you wished. But you are going to be a sorry boy before very long.”

Pinocchio, greatly frightened, looked about him to see whence the words had come, but he saw no one. The donkeys galloped, the wagon rolled on smoothly, the boys slept (Lamp-Wick snored like a dormouse) and the little, fat driver sang sleepily between his teeth.

After a mile or so, Pinocchio again heard the same faint voice whispering: “Remember, little simpleton! Boys who stop studying and turn their backs upon books and schools and teachers in order to give all their time to nonsense and pleasure, sooner or later come to grief. Oh, how well I know this! How well I can prove it to you! A day will come when you will weep bitterly, even as I am weeping now—but it will be too late!”

At these whispered words, the Marionette grew more and more frightened. He jumped to the ground, ran up to the donkey on whose back he had been riding, and taking his nose in his hands, looked at him. Think how great was his surprise when he saw that the donkey was weeping—weeping just like a boy!

“Hey, Mr. Driver!” cried the Marionette. “Do you know what strange thing is happening here! This donkey weeps.”

“Let him weep. When he gets married, he will have time to laugh.”

“Have you perhaps taught him to speak?”

“No, he learned to mumble a few words when he lived for three years with a band of trained dogs.”

“Come, come,” said the Little Man, “do not lose time over a donkey that can weep. Mount quickly and let us go. The night is cool and the road is long.”

Pinocchio obeyed without another word. The wagon started again. Toward dawn the next morning they finally reached that much-longed-for country, the Land of Toys. 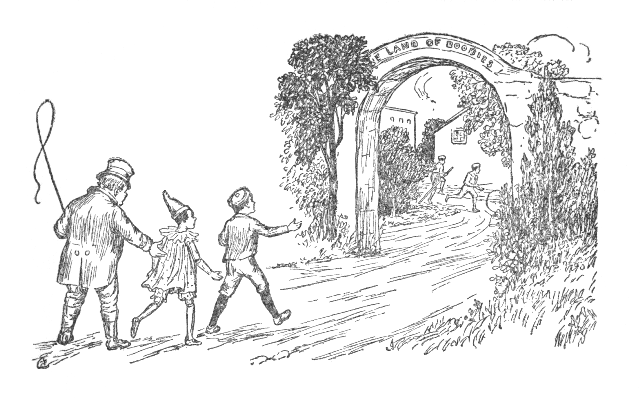 This great land was entirely different from any other place in the world. Its population, large though it was, was composed wholly of boys. The oldest were about fourteen years of age, the youngest, eight. In the street, there was such a racket, such shouting, such blowing of trumpets, that it was deafening. Everywhere groups of boys were gathered together. Some played at marbles, at hopscotch, at ball. Others rode on bicycles or on wooden horses. Some played at blindman’s buff, others at tag. Here a group played circus, there another sang and recited. A few turned somersaults, others walked on their hands with their feet in the air. Generals in full uniform leading regiments of cardboard soldiers passed by. Laughter, shrieks, howls, catcalls, hand-clapping followed this parade. One boy made a noise like a hen, another like a rooster, and a third imitated a lion in his den. All together they created such a pandemonium that it would have been necessary for you to put cotton in your ears. The squares were filled with small wooden theaters, overflowing with boys from morning till night, and on the walls of the houses, written with charcoal, were words like these: HURRAH FOR THE LAND OF TOYS! DOWN WITH ARITHMETIC! NO MORE SCHOOL!

As soon as they had set foot in that land, Pinocchio, Lamp-Wick, and all the other boys who had traveled with them started out on a tour of investigation. They wandered everywhere, they looked into every nook and corner, house and theater. They became everybody’s friend. Who could be happier than they?

What with entertainments and parties, the hours, the days, the weeks passed like lightning.

“Oh, what a beautiful life this is!” said Pinocchio each time that, by chance, he met his friend Lamp-Wick.

“Was I right or wrong?” answered Lamp-Wick. “And to think you did not want to come! To think that even yesterday the idea came into your head to return home to see your Fairy and to start studying again! If today you are free from pencils and books and school, you owe it to me, to my advice, to my care. Do you admit it? Only true friends count, after all.”

“It’s true, Lamp-Wick, it’s true. If today I am a really happy boy, it is all because of you. And to think that the teacher, when speaking of you, used to say, ‘Do not go with that Lamp-Wick! He is a bad companion and some day he will lead you astray.'”

“Poor teacher!” answered the other, nodding his head. “Indeed I know how much he disliked me and how he enjoyed speaking ill of me. But I am of a generous nature, and I gladly forgive him.”

Five months passed and the boys continued playing and enjoying themselves from morn till night, without ever seeing a book, or a desk, or a school. But, my children, there came a morning when Pinocchio awoke and found a great surprise awaiting him, a surprise which made him feel very unhappy, as you shall see.

There’s a Stinky Goblin in the Shed – Chapter 9

The Princess and the Goblin – Chapter 2