Pinocchio’s ears become like those of a Donkey. In a little while he changes into a real Donkey and begins to bray.

Everyone, at one time or another, has found some surprise awaiting him. Of the kind which Pinocchio had on that eventful morning of his life, there are but few.

What was it? I will tell you, my dear little readers. On awakening, Pinocchio put his hand up to his head and there he found—

He found that, during the night, his ears had grown at least ten full inches!

You must know that the Marionette, even from his birth, had very small ears, so small indeed that to the naked eye they could hardly be seen. Fancy how he felt when he noticed that overnight those two dainty organs had become as long as shoe brushes!

He went in search of a mirror, but not finding any, he just filled a basin with water and looked at himself. There he saw what he never could have wished to see. His manly figure was adorned and enriched by a beautiful pair of donkey’s ears.

I leave you to think of the terrible grief, the shame, the despair of the poor Marionette. He began to cry, to scream, to knock his head against the wall, but the more he shrieked, the longer and the more hairy grew his ears.

At those piercing shrieks, a Dormouse came into the room, a fat little Dormouse, who lived upstairs. Seeing Pinocchio so grief-stricken, she asked him anxiously:

“What is the matter, dear little neighbor?”

“I am sick, my little Dormouse, very, very sick—and from an illness which frightens me! Do you understand how to feel the pulse?”

“Feel mine then and tell me if I have a fever.”

The Dormouse took Pinocchio’s wrist between her paws and, after a few minutes, looked up at him sorrowfully and said: “My friend, I am sorry, but I must give you some very sad news.”

“You have a very bad fever.”

“I don’t know anything about that fever,” answered the Marionette, beginning to understand even too well what was happening to him.

“Then I will tell you all about it,” said the Dormouse. “Know then that, within two or three hours, you will no longer be a Marionette, nor a boy.”

“Within two or three hours you will become a real donkey, just like the ones that pull the fruit carts to market.”

“Oh, what have I done? What have I done?” cried Pinocchio, grasping his two long ears in his hands and pulling and tugging at them angrily, just as if they belonged to another.

“My dear boy,” answered the Dormouse to cheer him up a bit, “why worry now? What is done cannot be undone, you know. Fate has decreed that all lazy boys who come to hate books and schools and teachers and spend all their days with toys and games must sooner or later turn into donkeys.”

“But is it really so?” asked the Marionette, sobbing bitterly.

“I am sorry to say it is. And tears now are useless. You should have thought of all this before.”

“And who is this Lamp-Wick?”

“And why did you follow the advice of that false friend?”

“Why? Because, my dear little Dormouse, I am a heedless Marionette—heedless and heartless. Oh! If I had only had a bit of heart, I should never have abandoned that good Fairy, who loved me so well and who has been so kind to me! And by this time, I should no longer be a Marionette. I should have become a real boy, like all these friends of mine! Oh, if I meet Lamp-Wick I am going to tell him what I think of him—and more, too!”

After this long speech, Pinocchio walked to the door of the room. But when he reached it, remembering his donkey ears, he felt ashamed to show them to the public and turned back. He took a large cotton bag from a shelf, put it on his head, and pulled it far down to his very nose.

Thus adorned, he went out. He looked for Lamp-Wick everywhere, along the streets, in the squares, inside the theatres, everywhere; but he was not to be found. He asked everyone whom he met about him, but no one had seen him. In desperation, he returned home and knocked at the door.

“Who is it?” asked Lamp-Wick from within.

“It is I!” answered the Marionette.

After a full half hour the door opened. Another surprise awaited Pinocchio! There in the room stood his friend, with a large cotton bag on his head, pulled far down to his very nose.

At the sight of that bag, Pinocchio felt slightly happier and thought to himself: “My friend must be suffering from the same sickness that I am! I wonder if he, too, has donkey fever?”

But pretending he had seen nothing, he asked with a smile:

“Very well. Like a mouse in a Parmesan cheese.”

“Is that really true?”

“I beg your pardon, my friend, but why then are you wearing that cotton bag over your ears?”

“The doctor has ordered it because one of my knees hurts. And you, dear Marionette, why are you wearing that cotton bag down to your nose?”

“The doctor has ordered it because I have bruised my foot.”

An embarrassingly long silence followed these words, during which time the two friends looked at each other in a mocking way.

Finally the Marionette, in a voice sweet as honey and soft as a flute, said to his companion:

“Tell me, Lamp-Wick, dear friend, have you ever suffered from an earache?”

“Never! Still, since this morning my ear has been torturing me.”

“Both of them, too. I wonder if it could be the same sickness.”

“Gladly! With my whole heart.”

“Will you let me see your ears?”

“Why not? But before I show you mine, I want to see yours, dear Pinocchio.”

“No. You must show yours first.”

“Well, then,” said the Marionette, “let us make a contract.”

“Let us take off our caps together. All right?”

At the word “Three!” the two boys pulled off their caps and threw them high in air. 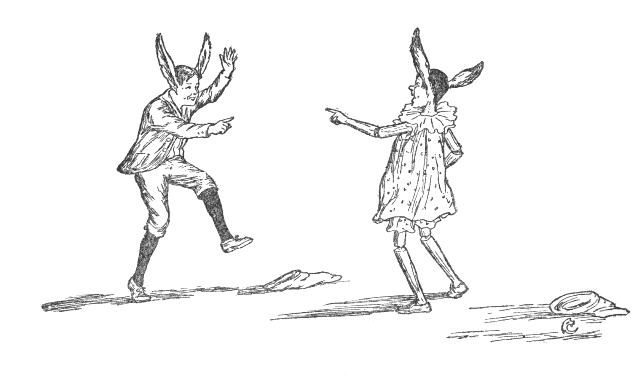 And then a scene took place which is hard to believe, but it is all too true. The Marionette and his friend, Lamp-Wick, when they saw each other both stricken by the same misfortune, instead of feeling sorrowful and ashamed, began to poke fun at each other, and after much nonsense, they ended by bursting out into hearty laughter.

But all of a sudden Lamp-Wick stopped laughing. He tottered and almost fell. Pale as a ghost, he turned to Pinocchio and said:

“What is the matter?”

“I can’t either,” cried Pinocchio; and his laughter turned to tears as he stumbled about helplessly.

They had hardly finished speaking, when both of them fell on all fours and began running and jumping around the room. As they ran, their arms turned into legs, their faces lengthened into snouts and their backs became covered with long gray hairs.

This was humiliation enough, but the most horrible moment was the one in which the two poor creatures felt their tails appear. Overcome with shame and grief, they tried to cry and bemoan their fate.

But what is done can’t be undone! Instead of moans and cries, they burst forth into loud donkey brays, which sounded very much like, “Haw! Haw! Haw!”

At that moment, a loud knocking was heard at the door and a voice called to them:

“Open! I am the Little Man, the driver of the wagon which brought you here. Open, I say, or beware!”

The Princess and the Goblin – Chapter 17

The Princess and the Goblin – Chapter 26