Pinocchio, having become a Donkey, is bought by the owner of a Circus, who wants to teach him to do tricks. The Donkey becomes lame and is sold to a man who wants to use his skin for a drumhead.

Very sad and downcast were the two poor little fellows as they stood and looked at each other. Outside the room, the Little Man grew more and more impatient, and finally gave the door such a violent kick that it flew open. With his usual sweet smile on his lips, he looked at Pinocchio and Lamp-Wick and said to them:

“Fine work, boys! You have brayed well, so well that I recognized your voices immediately, and here I am.”

On hearing this, the two Donkeys bowed their heads in shame, dropped their ears, and put their tails between their legs.

At first, the Little Man petted and caressed them and smoothed down their hairy coats. Then he took out a currycomb and worked over them till they shone like glass. Satisfied with the looks of the two little animals, he bridled them and took them to a market place far away from the Land of Toys, in the hope of selling them at a good price.

In fact, he did not have to wait very long for an offer. Lamp-Wick was bought by a farmer whose donkey had died the day before. Pinocchio went to the owner of a circus, who wanted to teach him to do tricks for his audiences.

And now do you understand what the Little Man’s profession was? This horrid little being, whose face shone with kindness, went about the world looking for boys. Lazy boys, boys who hated books, boys who wanted to run away from home, boys who were tired of school—all these were his joy and his fortune. He took them with him to the Land of Toys and let them enjoy themselves to their heart’s content. When, after months of all play and no work, they became little donkeys, he sold them on the market place. In a few years, he had become a millionaire.

What happened to Lamp-Wick? My dear children, I do not know. Pinocchio, I can tell you, met with great hardships even from the first day.

After putting him in a stable, his new master filled his manger with straw, but Pinocchio, after tasting a mouthful, spat it out.

Then the man filled the manger with hay. But Pinocchio did not like that any better.

“Ah, you don’t like hay either?” he cried angrily. “Wait, my pretty Donkey, I’ll teach you not to be so particular.”

Without more ado, he took a whip and gave the Donkey a hearty blow across the legs. Pinocchio screamed with pain and as he screamed he brayed:

“Then eat the hay!” answered his master, who understood the Donkey perfectly.

“Do you pretend, by any chance, that I should feed you duck or chicken?” asked the man again, and, angrier than ever, he gave poor Pinocchio another lashing.

At that second beating, Pinocchio became very quiet and said no more.

After that, the door of the stable was closed and he was left alone. It was many hours since he had eaten anything and he started to yawn from hunger. As he yawned, he opened a mouth as big as an oven.

Finally, not finding anything else in the manger, he tasted the hay. After tasting it, he chewed it well, closed his eyes, and swallowed it.

“This hay is not bad,” he said to himself. “But how much happier I should be if I had studied! Just now, instead of hay, I should be eating some good bread and butter. Patience!”

Next morning, when he awoke, Pinocchio looked in the manger for more hay, but it was all gone. He had eaten it all during the night.

He tried the straw, but, as he chewed away at it, he noticed to his great disappointment that it tasted neither like rice nor like macaroni.

“Patience!” he repeated as he chewed. “If only my misfortune might serve as a lesson to disobedient boys who refuse to study! Patience! Have patience!”

“Patience indeed!” shouted his master just then, as he came into the stable. “Do you think, perhaps, my little Donkey, that I have brought you here only to give you food and drink? Oh, no! You are to help me earn some fine gold pieces, do you hear? Come along, now. I am going to teach you to jump and bow, to dance a waltz and a polka, and even to stand on your head.”

Poor Pinocchio, whether he liked it or not, had to learn all these wonderful things; but it took him three long months and cost him many, many lashings before he was pronounced perfect.

The day came at last when Pinocchio’s master was able to announce an extraordinary performance. The announcements, posted all around the town, and written in large letters, read thus:

That night, as you can well imagine, the theatre was filled to overflowing one hour before the show was scheduled to start.

Not an orchestra chair could be had, not a balcony seat, nor a gallery seat; not even for their weight in gold.

The place swarmed with boys and girls of all ages and sizes, wriggling and dancing about in a fever of impatience to see the famous Donkey dance.

When the first part of the performance was over, the Owner and Manager of the circus, in a black coat, white knee breeches, and patent leather boots, presented himself to the public and in a loud, pompous voice made the following announcement:

“Most honoured friends, Gentlemen and Ladies! Your humble servant, the Manager of this theatre, presents himself before you tonight in order to introduce to you the greatest, the most famous Donkey in the world, a Donkey that has had the great honour in his short life of performing before the kings and queens and emperors of all the great courts of Europe. We thank you for your attention!”

This speech was greeted by much laughter and applause. And the applause grew to a roar when Pinocchio, the famous Donkey, appeared in the circus ring. He was handsomely arrayed. A new bridle of shining leather with buckles of polished brass was on his back; two white camellias were tied to his ears; ribbons and tassels of red silk adorned his mane, which was divided into many curls. A great sash of gold and silver was fastened around his waist and his tail was decorated with ribbons of many brilliant colours. He was a handsome Donkey indeed!

The Manager, when introducing him to the public, added these words:

“Most honoured audience! I shall not take your time tonight to tell you of the great difficulties which I have encountered while trying to tame this animal, since I found him in the wilds of Africa. Observe, I beg of you, the savage look of his eye. All the means used by centuries of civilisation in subduing wild beasts failed in this case. I had finally to resort to the gentle language of the whip in order to bring him to my will. With all my kindness, however, I never succeeded in gaining my Donkey’s love. He is still today as savage as the day I found him. He still fears and hates me. But I have found in him one great redeeming feature. Do you see this little bump on his forehead? It is this bump which gives him his great talent of dancing and using his feet as nimbly as a human being. Admire him, O signori, and enjoy yourselves. I let you, now, be the judges of my success as a teacher of animals. Before I leave you, I wish to state that there will be another performance tomorrow night. If the weather threatens rain, the great spectacle will take place at eleven o’clock in the morning.”

The Manager bowed and then turned to Pinocchio and said: “Ready, Pinocchio! Before starting your performance, salute your audience!”

Pinocchio obediently bent his two knees to the ground and remained kneeling until the Manager, with the crack of the whip, cried sharply: “Walk!”

The Donkey lifted himself on his four feet and walked around the ring. A few minutes passed and again the voice of the Manager called:

“Full speed!” and Pinocchio ran as fast as he could. As he ran the master raised his arm and a pistol shot rang in the air.

At the shot, the little Donkey fell to the ground as if he were really dead.

A shower of applause greeted the Donkey as he arose to his feet. Cries and shouts and handclappings were heard on all sides.

At all that noise, Pinocchio lifted his head and raised his eyes. There, in front of him, in a box sat a beautiful woman. Around her neck she wore a long gold chain, from which hung a large medallion. On the medallion was painted the picture of a Marionette.

“That picture is of me! That beautiful lady is my Fairy!” said Pinocchio to himself, recognising her. He felt so happy that he tried his best to cry out:

But instead of words, a loud braying was heard in the theater, so loud and so long that all the spectators—men, women, and children, but especially the children—burst out laughing.

Then, in order to teach the Donkey that it was not good manners to bray before the public, the Manager hit him on the nose with the handle of the whip.

The poor little Donkey stuck out a long tongue and licked his nose for a long time in an effort to take away the pain.

And what was his grief when on looking up toward the boxes, he saw that the Fairy had disappeared!

He felt himself fainting, his eyes filled with tears, and he wept bitterly. No one knew it, however, least of all the Manager, who, cracking his whip, cried out:

“Bravo, Pinocchio! Now show us how gracefully you can jump through the rings.”

Pinocchio tried two or three times, but each time he came near the ring, he found it more to his taste to go under it. The fourth time, at a look from his master he leaped through it, but as he did so his hind legs caught in the ring and he fell to the floor in a heap.

When he got up, he was lame and could hardly limp as far as the stable.

No one saw Pinocchio again that evening.

The next morning the veterinary—that is, the animal doctor—declared that he would be lame for the rest of his life.

“What do I want with a lame donkey?” said the Manager to the stableboy. “Take him to the market and sell him.”

When they reached the square, a buyer was soon found.

“How much do you ask for that little lame Donkey?” he asked.

“I’ll give you four cents. Don’t think I’m buying him for work. I want only his skin. It looks very tough and I can use it to make myself a drumhead. I belong to a musical band in my village and I need a drum.”

I leave it to you, my dear children, to picture to yourself the great pleasure with which Pinocchio heard that he was to become a drumhead!

As soon as the buyer had paid the four cents, the Donkey changed hands. His new owner took him to a high cliff overlooking the sea, put a stone around his neck, tied a rope to one of his hind feet, gave him a push, and threw him into the water.

Pinocchio sank immediately. And his new master sat on the cliff waiting for him to drown, so as to skin him and make himself a drumhead. 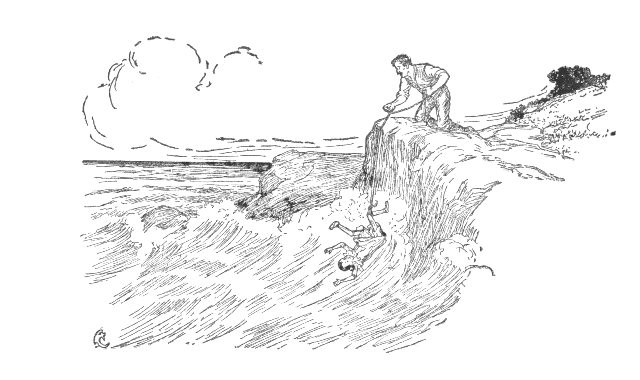 There’s a Stinky Goblin in the Shed – Chapter 4