Return to the Beginning of Pinocchio !

Pinocchio is thrown into the sea, eaten by fishes, and becomes a Marionette once more. As he swims to land, he is swallowed by the Terrible Dog-Fish.

Down into the sea, deeper and deeper, sank Pinocchio, and finally, after fifty minutes of waiting, the man on the cliff said to himself:

“By this time my poor little lame Donkey must be drowned. Up with him and then I can get to work on my beautiful drum.”

He pulled the rope which he had tied to Pinocchio’s leg—pulled and pulled and pulled and, at last, he saw appear on the surface of the water—Can you guess what? Instead of a dead donkey, he saw a very much alive Marionette, wriggling and squirming like an eel. Seeing that wooden Marionette, the poor man thought he was dreaming and sat there with his mouth wide open and his eyes popping out of his head.

Gathering his wits together, he said:

“And the Donkey I threw into the sea?”

“I am that Donkey,” answered the Marionette laughing.

“Ah, you little cheat! Are you poking fun at me?”

“Poking fun at you? Not at all, dear Master. I am talking seriously.”

“But, then, how is it that you, who a few minutes ago were a donkey, are now standing before me a wooden Marionette?”

“It may be the effect of salt water. The sea is fond of playing these tricks.”

“Be careful, Marionette, be careful! Don’t laugh at me! Woe be to you, if I lose my patience!”

“Well, then, my Master, do you want to know my whole story? Untie my leg and I can tell it to you better.”

The old fellow, curious to know the true story of the Marionette’s life, immediately untied the rope which held his foot. Pinocchio, feeling free as a bird of the air, began his tale:

“Know, then, that, once upon a time, I was a wooden Marionette, just as I am today. One day I was about to become a boy, a real boy, but on account of my laziness and my hatred of books, and because I listened to bad companions, I ran away from home. One beautiful morning, I awoke to find myself changed into a donkey—long ears, gray coat, even a tail! What a shameful day for me! I hope you will never experience one like it, dear Master. I was taken to the fair and sold to a Circus Owner, who tried to make me dance and jump through the rings. One night, during a performance, I had a bad fall and became lame. Not knowing what to do with a lame donkey, the Circus Owner sent me to the market place and you bought me.”

“Indeed I did! And I paid four cents for you. Now who will return my money to me?”

“But why did you buy me? You bought me to do me harm—to kill me—to make a drumhead out of me!”

“Indeed I did! And now where shall I find another skin?”

“Never mind, dear Master. There are so many donkeys in this world.”

“Tell me, impudent little rogue, does your story end here?”

“One more word,” answered the Marionette, “and I am through. After buying me, you brought me here to kill me. But feeling sorry for me, you tied a stone to my neck and threw me to the bottom of the sea. That was very good and kind of you to want me to suffer as little as possible and I shall remember you always. And now my Fairy will take care of me, even if you—”

“She is my mother, and, like all other mothers who love their children, she never loses sight of me, even though I do not deserve it. And today this good Fairy of mine, as soon as she saw me in danger of drowning, sent a thousand fishes to the spot where I lay. They thought I was really a dead donkey and began to eat me. What great bites they took! One ate my ears, another my nose, a third my neck and my mane. Some went at my legs and some at my back, and among the others, there was one tiny fish so gentle and polite that he did me the great favor of eating even my tail.”

“From now on,” said the man, horrified, “I swear I shall never again taste fish. How I should enjoy opening a mullet or a whitefish just to find there the tail of a dead donkey!”

“I think as you do,” answered the Marionette, laughing. “Still, you must know that when the fish finished eating my donkey coat, which covered me from head to foot, they naturally came to the bones—or rather, in my case, to the wood, for as you know, I am made of very hard wood. After the first few bites, those greedy fish found out that the wood was not good for their teeth, and, afraid of indigestion, they turned and ran here and there without saying good-by or even as much as thank you to me. Here, dear Master, you have my story. You know now why you found a Marionette and not a dead donkey when you pulled me out of the water.”

“I laugh at your story!” cried the man angrily. “I know that I spent four cents to get you and I want my money back. Do you know what I can do; I am going to take you to the market once more and sell you as dry firewood.”

“Very well, sell me. I am satisfied,” said Pinocchio. But as he spoke, he gave a quick leap and dived into the sea. Swimming away as fast as he could, he cried out, laughing:

“Good-by, Master. If you ever need a skin for your drum, remember me.”

He swam on and on. After a while, he turned around again and called louder than before:

“Good-by, Master. If you ever need a piece of good dry firewood, remember me.”

In a few seconds he had gone so far he could hardly be seen. All that could be seen of him was a very small black dot moving swiftly on the blue surface of the water, a little black dot which now and then lifted a leg or an arm in the air. One would have thought that Pinocchio had turned into a porpoise playing in the sun.

After swimming for a long time, Pinocchio saw a large rock in the middle of the sea, a rock as white as marble. High on the rock stood a little Goat bleating and calling and beckoning to the Marionette to come to her. 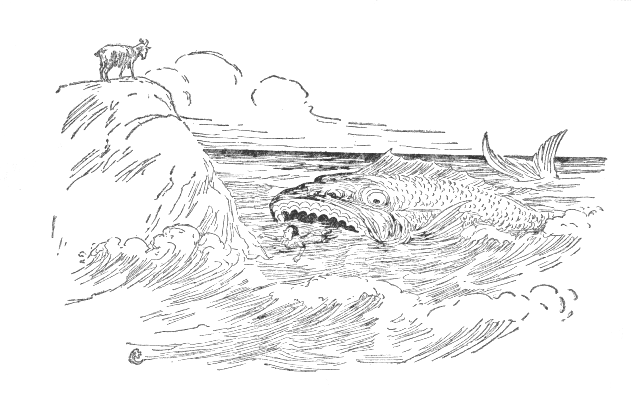 There was something very strange about that little Goat. Her coat was not white or black or brown as that of any other goat, but azure, a deep brilliant color that reminded one of the hair of the lovely maiden.

Pinocchio’s heart beat fast, and then faster and faster. He redoubled his efforts and swam as hard as he could toward the white rock. He was almost halfway over, when suddenly a horrible sea monster stuck its head out of the water, an enormous head with a huge mouth, wide open, showing three rows of gleaming teeth, the mere sight of which would have filled you with fear.

Do you know what it was?

That sea monster was no other than the enormous Dog-Fish, which has often been mentioned in this story and which, on account of its cruelty, had been nicknamed “The Attila of the Sea” by both fish and fishermen.

Poor Pinocchio! The sight of that monster frightened him almost to death! He tried to swim away from him, to change his path, to escape, but that immense mouth kept coming nearer and nearer.

“Hasten, Pinocchio, I beg you!” bleated the little Goat on the high rock.

And Pinocchio swam desperately with his arms, his body, his legs, his feet.

Pinocchio swam faster and faster, and harder and harder.

Pinocchio went through the water like a shot—swifter and swifter. He came close to the rock. The Goat leaned over and gave him one of her hoofs to help him up out of the water.

Alas! It was too late. The monster overtook him and the Marionette found himself in between the rows of gleaming white teeth. Only for a moment, however, for the Dog-Fish took a deep breath and, as he breathed, he drank in the Marionette as easily as he would have sucked an egg. Then he swallowed him so fast that Pinocchio, falling down into the body of the fish, lay stunned for a half hour.

When he recovered his senses the Marionette could not remember where he was.

Around him all was darkness, a darkness so deep and so black that for a moment he thought he had put his head into an inkwell. He listened for a few moments and heard nothing. Once in a while a cold wind blew on his face. At first he could not understand where that wind was coming from, but after a while he understood that it came from the lungs of the monster. I forgot to tell you that the Dog-Fish was suffering from asthma, so that whenever he breathed a storm seemed to blow.

Pinocchio at first tried to be brave, but as soon as he became convinced that he was really and truly in the Dog-Fish’s stomach, he burst into sobs and tears. “Help! Help!” he cried. “Oh, poor me! Won’t someone come to save me?”

“Who is there to help you, unhappy boy?” said a rough voice, like a guitar out of tune.

“Who is talking?” asked Pinocchio, frozen with terror.

“It is I, a poor Tunny swallowed by the Dog-Fish at the same time as you. And what kind of a fish are you?”

“I have nothing to do with fishes. I am a Marionette.”

“If you are not a fish, why did you let this monster swallow you?”

“I didn’t let him. He chased me and swallowed me without even a ‘by your leave’! And now what are we to do here in the dark?”

“Wait until the Dog-Fish has digested us both, I suppose.”

“But I don’t want to be digested,” shouted Pinocchio, starting to sob.

“Neither do I,” said the Tunny, “but I am wise enough to think that if one is born a fish, it is more dignified to die under the water than in the frying pan.”

“Mine is an opinion,” replied the Tunny, “and opinions should be respected.”

“But I want to get out of this place. I want to escape.”

“Is this Dog-Fish that has swallowed us very long?” asked the Marionette.

“His body, not counting the tail, is almost a mile long.”

While talking in the darkness, Pinocchio thought he saw a faint light in the distance.

“What can that be?” he said to the Tunny.

“Some other poor fish, waiting as patiently as we to be digested by the Dog-Fish.”

“I want to see him. He may be an old fish and may know some way of escape.”

“I wish you all good luck, dear Marionette.”

“When shall I see you again?”

“Who knows? It is better not to think about it.”