The story of Pinocchio and the Talking Cricket, in which one sees that bad children do not like to be corrected by those who know more than they do.

Very little time did it take to get poor old Geppetto to prison. In the meantime that rascal, Pinocchio, free now from the clutches of the Carabineer, was running wildly across fields and meadows, taking one short cut after another toward home. In his wild flight, he leaped over brambles and bushes, and across brooks and ponds, as if he were a goat or a hare chased by hounds.

On reaching home, he found the house door half open. He slipped into the room, locked the door, and threw himself on the floor, happy at his escape.

But his happiness lasted only a short time, for just then he heard someone saying:

“Who is calling me?” asked Pinocchio, greatly frightened.

Pinocchio turned and saw a large cricket crawling slowly up the wall.

“I am the Talking Cricket and I have been living in this room for more than one hundred years.”

“Today, however, this room is mine,” said the Marionette, “and if you wish to do me a favor, get out now, and don’t turn around even once.”

“I refuse to leave this spot,” answered the Cricket, “until I have told you a great truth.”

“Woe to boys who refuse to obey their parents and run away from home! They will never be happy in this world, and when they are older they will be very sorry for it.”

“Sing on, Cricket mine, as you please. What I know is, that tomorrow, at dawn, I leave this place forever. If I stay here the same thing will happen to me which happens to all other boys and girls. They are sent to school, and whether they want to or not, they must study. As for me, let me tell you, I hate to study! It’s much more fun, I think, to chase after butterflies, climb trees, and steal birds’ nests.”

“Poor little silly! Don’t you know that if you go on like that, you will grow into a perfect donkey and that you’ll be the laughingstock of everyone?”

But the Cricket, who was a wise old philosopher, instead of being offended at Pinocchio’s impudence, continued in the same tone:

“If you do not like going to school, why don’t you at least learn a trade, so that you can earn an honest living?”

“Shall I tell you something?” asked Pinocchio, who was beginning to lose patience. “Of all the trades in the world, there is only one that really suits me.”

“That of eating, drinking, sleeping, playing, and wandering around from morning till night.”

“Let me tell you, for your own good, Pinocchio,” said the Talking Cricket in his calm voice, “that those who follow that trade always end up in the hospital or in prison.”

“Careful, ugly Cricket! If you make me angry, you’ll be sorry!”

“Poor Pinocchio, I am sorry for you.”

“Because you are a Marionette and, what is much worse, you have a wooden head.”

At these last words, Pinocchio jumped up in a fury, took a hammer from the bench, and threw it with all his strength at the Talking Cricket. 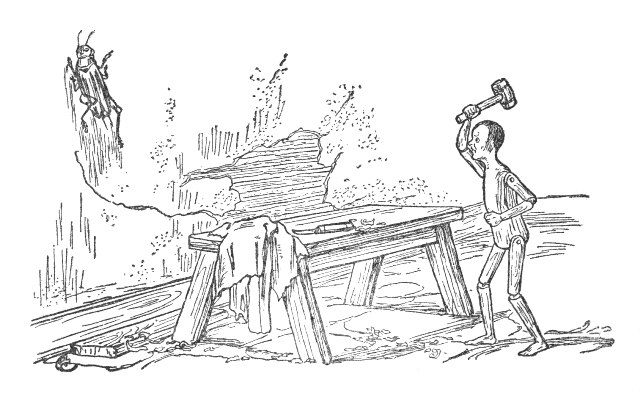 Perhaps he did not think he would strike it. But, sad to relate, my dear children, he did hit the Cricket, straight on its head.

With a last weak “cri-cri-cri” the poor Cricket fell from the wall, dead!

The Princess and the Goblin – Chapter 25