Skip to content
Story Reads: 10,302
Return to the Beginning of Pinocchio

Pinocchio is hungry and looks for an egg to cook himself an omelet; but, to his surprise, the omelet flies out of the window.

If the Cricket’s death scared Pinocchio at all, it was only for a very few moments. For, as night came on, a queer, empty feeling at the pit of his stomach reminded the Marionette that he had eaten nothing as yet.

A boy’s appetite grows very fast, and in a few moments the queer, empty feeling had become hunger, and the hunger grew bigger and bigger, until soon he was as ravenous as a bear.

Poor Pinocchio ran to the fireplace where the pot was boiling and stretched out his hand to take the cover off, but to his amazement the pot was only painted! Think how he felt! His long nose became at least two inches longer.

He ran about the room, dug in all the boxes and drawers, and even looked under the bed in search of a piece of bread, hard though it might be, or a cookie, or perhaps a bit of fish. A bone left by a dog would have tasted good to him! But he found nothing.

And meanwhile his hunger grew and grew. The only relief poor Pinocchio had was to yawn; and he certainly did yawn, such a big yawn that his mouth stretched out to the tips of his ears. Soon he became dizzy and faint. He wept and wailed to himself:

“The Talking Cricket was right. It was wrong of me to disobey Father and to run away from home. If he were here now, I wouldn’t be so hungry! Oh, how horrible it is to be hungry!”

Suddenly, he saw, among the sweepings in a corner, something round and white that looked very much like a hen’s egg. In a jiffy he pounced upon it. It was an egg.

The Marionette’s joy knew no bounds. It is impossible to describe it, you must picture it to yourself. Certain that he was dreaming, he turned the egg over and over in his hands, fondled it, kissed it, and talked to it:

“And now, how shall I cook you? Shall I make an omelet? No, it is better to fry you in a pan! Or shall I drink you? No, the best way is to fry you in the pan. You will taste better.”

No sooner said than done. He placed a little pan over a foot warmer full of hot coals. In the pan, instead of oil or butter, he poured a little water. As soon as the water started to boil—tac!—he broke the eggshell. But in place of the white and the yolk of the egg, a little yellow Chick, fluffy and gay and smiling, escaped from it. Bowing politely to Pinocchio, he said to him:

“Many, many thanks, indeed, Mr. Pinocchio, for having saved me the trouble of breaking my shell! Good-by and good luck to you and remember me to the family!” 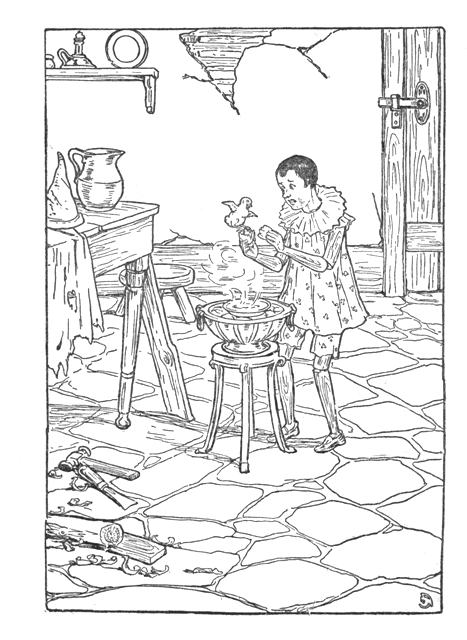 With these words he spread out his wings and, darting to the open window, he flew away into space till he was out of sight.

The poor Marionette stood as if turned to stone, with wide eyes, open mouth, and the empty halves of the egg-shell in his hands. When he came to himself, he began to cry and shriek at the top of his lungs, stamping his feet on the ground and wailing all the while:

“The Talking Cricket was right! If I had not run away from home and if Father were here now, I should not be dying of hunger. Oh, how horrible it is to be hungry!”

And as his stomach kept grumbling more than ever and he had nothing to quiet it with, he thought of going out for a walk to the near-by village, in the hope of finding some charitable person who might give him a bit of bread.

The Princess and the Goblin – Chapter 9