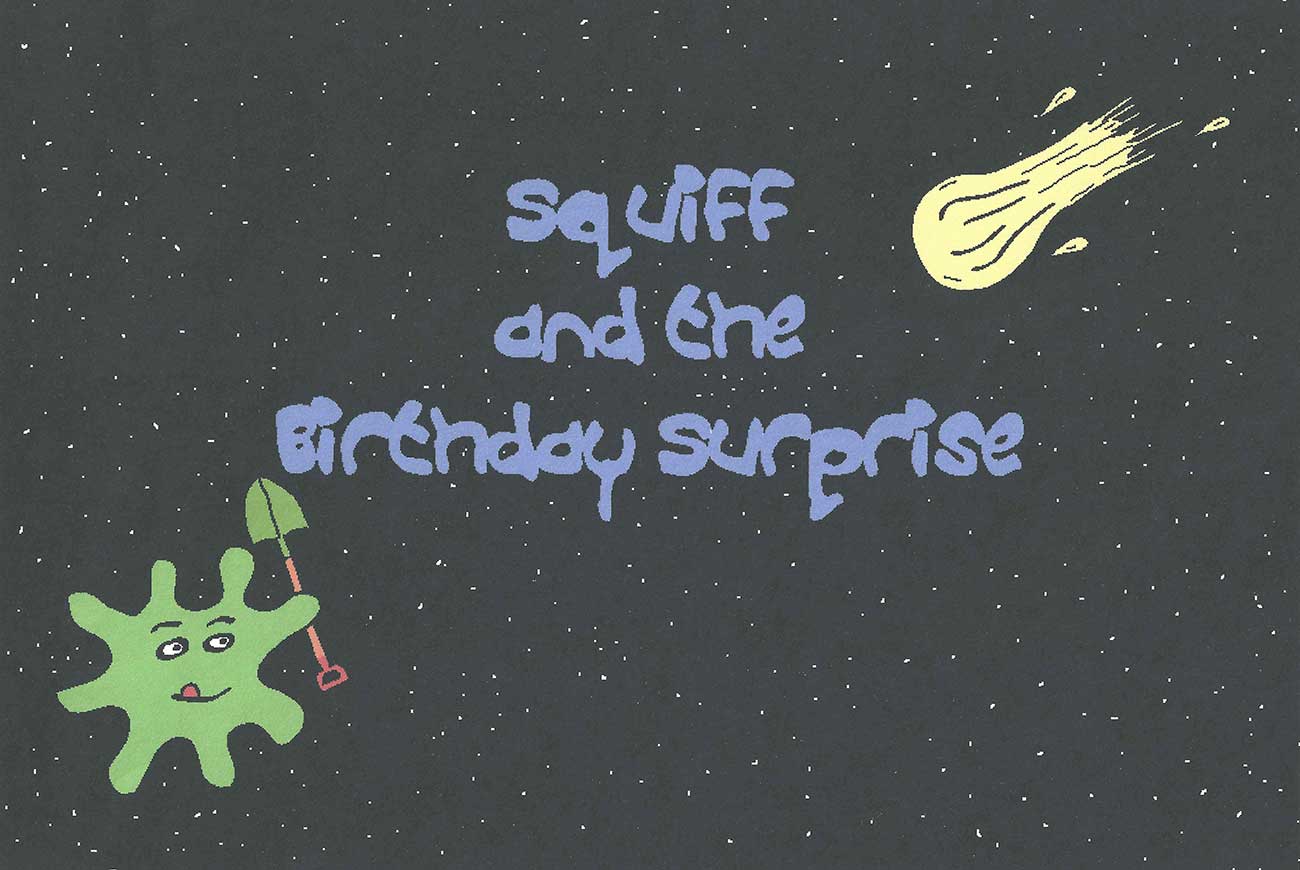 It was Saturday morning on the planet Blerg, and Squiff the squishy space-blob was feeling excited. His friend Bitsa the robot was having a birthday party, and Squiff had been invited.

Squiff loved parties. He loved the games, he loved seeing all his friends and he loved the presents, even when they weren’t for him. But most especially of all, he loved the food. Squiff lo-o-o-o-o-o-ved to eat. He’d only had one bowl of Moon Flakes and four pieces of toast for breakfast, so that he would have lots of room for party food.

He could hardly wait. 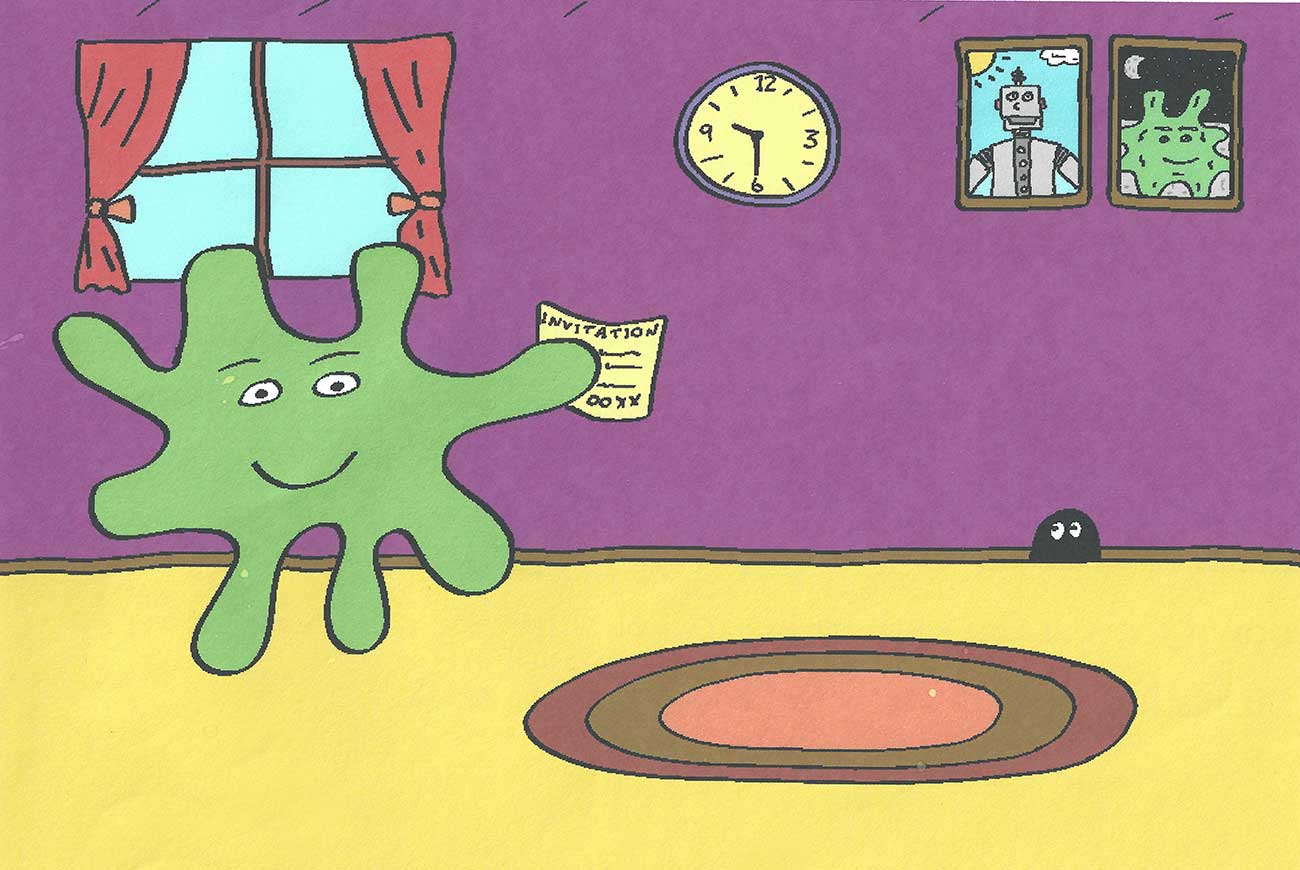 Luckily, it doesn’t take a squishy space-blob very long to get dressed, so Squiff was soon ready. He picked out a nice purple bow-tie, and carefully made sure that it was on straight. He thought about brushing his hair, but then felt a bit silly when he remembered that he didn’t have any.

He said good-bye to his teddy-bear Spiff and set off happily down the garden path to his rocket ship. He’d decided to fly to Bitsa’s house, as it was quite a long way to walk. 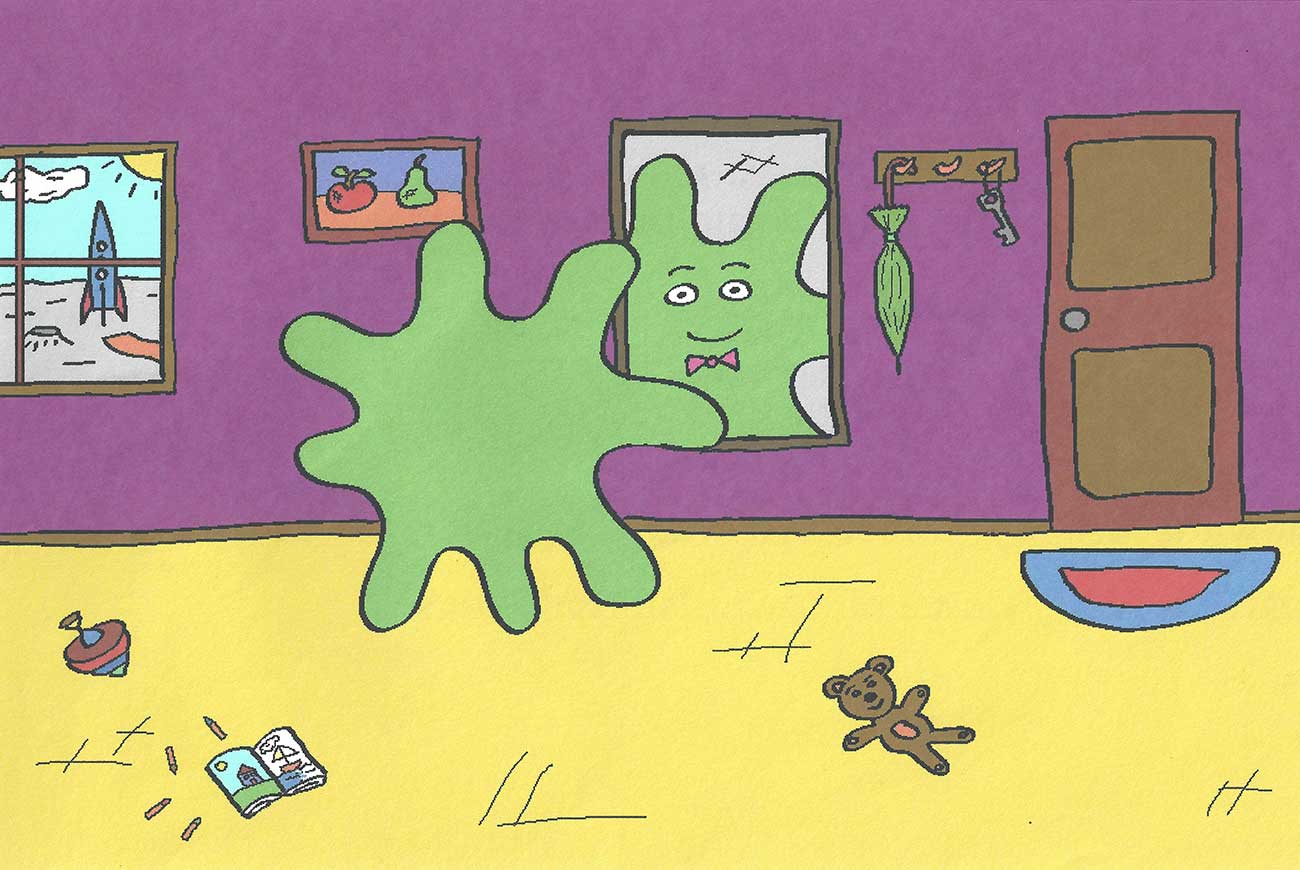 He was just about to climb into his rocket when he noticed a spider, busily spinning a web on one of the fins. The little creature was working so hard that Squiff decided not to disturb it by blasting off in his rocket. It was a nice day for a walk, and there was plenty of time before the party started. He set off towards Bitsa’s house. 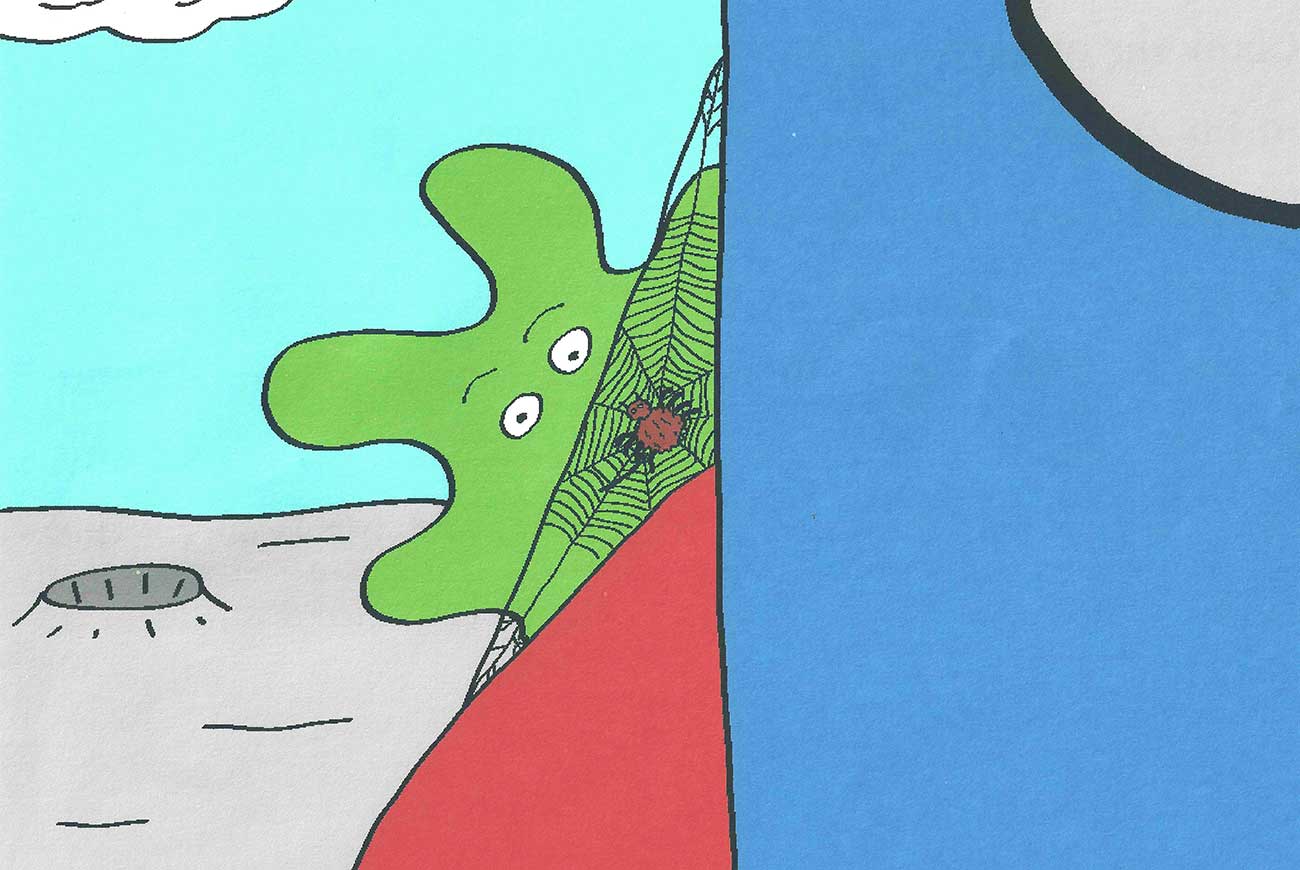 Clank the robot lived next door to Squiff, and he was out in his front garden, painting the fence. Squiff popped his head over the fence to say hello, but Clank was a bit deaf, and didn’t see very well either, so he didn’t notice. In fact, he thought Squiff’s face was part of the fence and painted it as well!

Luckily, Squiff closed his eyes before any paint got into them, and when he checked his bow-tie, he found it was still clean. He gave his old neighbour a smile and set off again. 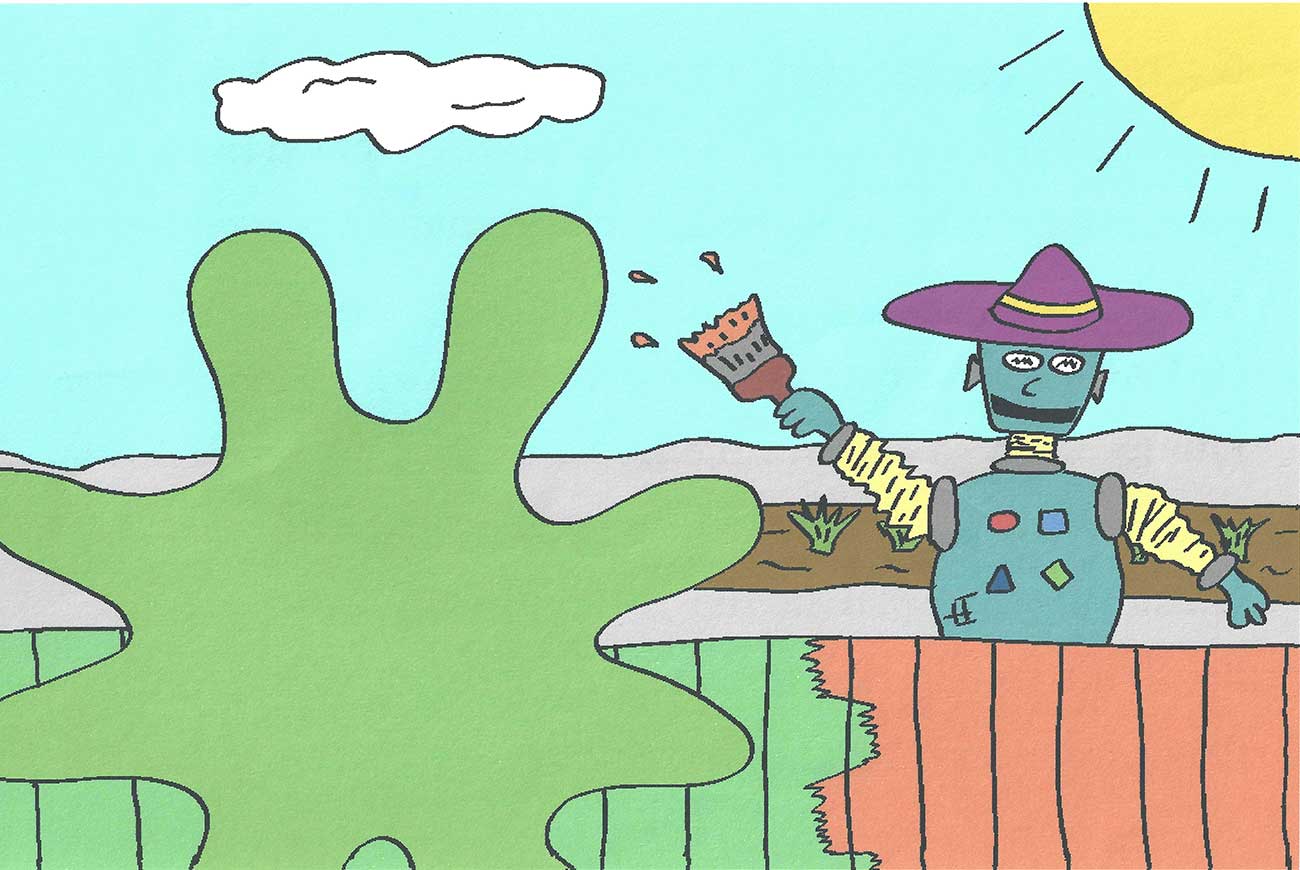 Before too long, Squiff started to feel a bit hungry. He was often hungry, and his miniature breakfast felt like it had been a long time ago. He looked around for something to eat and soon came across a Jupiter-berry tree, loaded with ripe, juicy Jupiter-berries.

The berries were a bit too high for Squiff to reach, so he gave the tree a shake. Berries began to fall down, and one especially big and juicy one landed with a splat, right in the middle of his face! Squiff was so hungry that he kept shaking anyway. 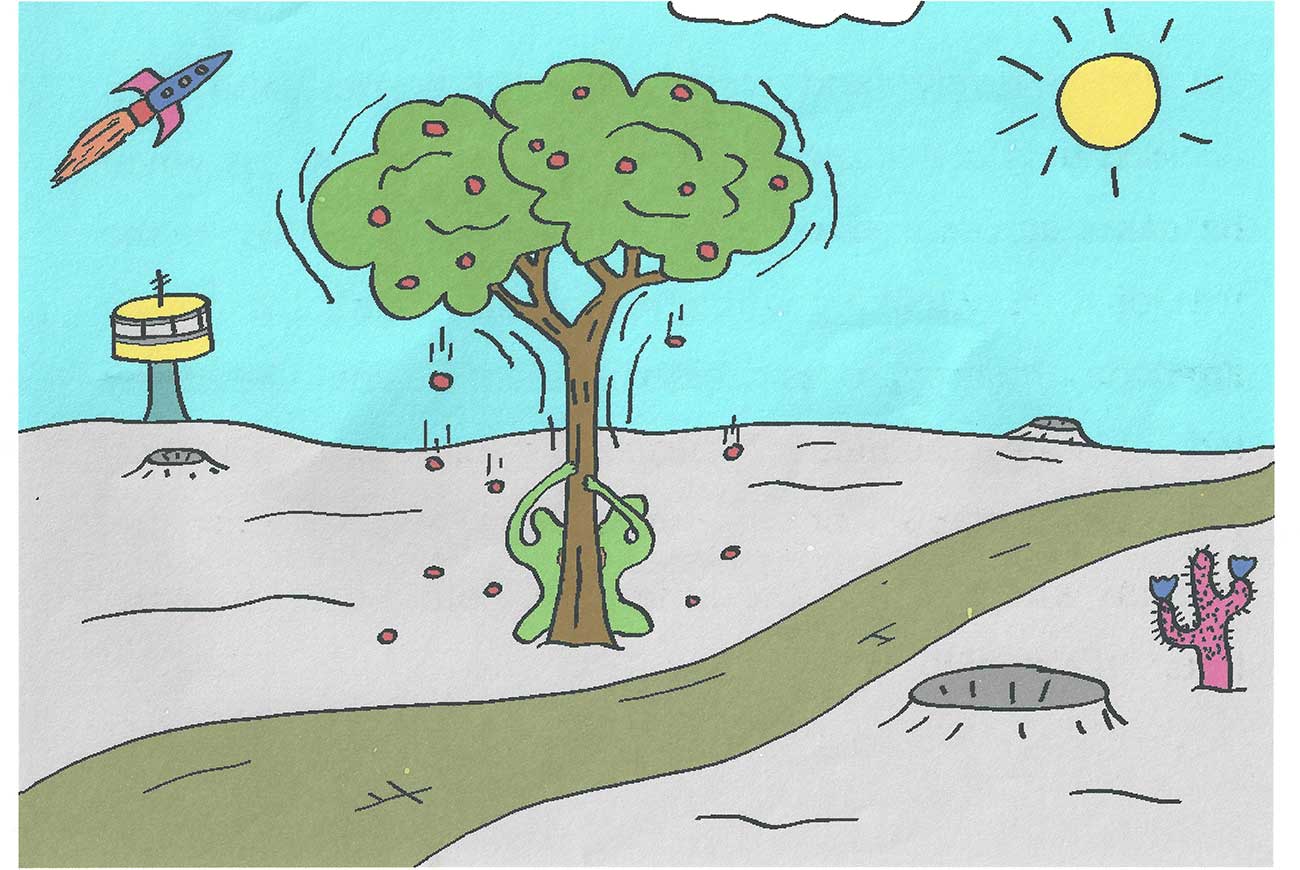 Squiff had a lovely (and messy) feast of berries, and then decided he’d better keep moving. He hadn’t gone far before he came across a young squishy space-blob, sitting at the foot of a tree, looking unhappy.

Squiff didn’t like anybody to be sad, so he decided to see if he could help. “What’s the matter?” he asked.

“It’s my kite,” replied the little blob, pointing up into the tree. “It’s stuck.” 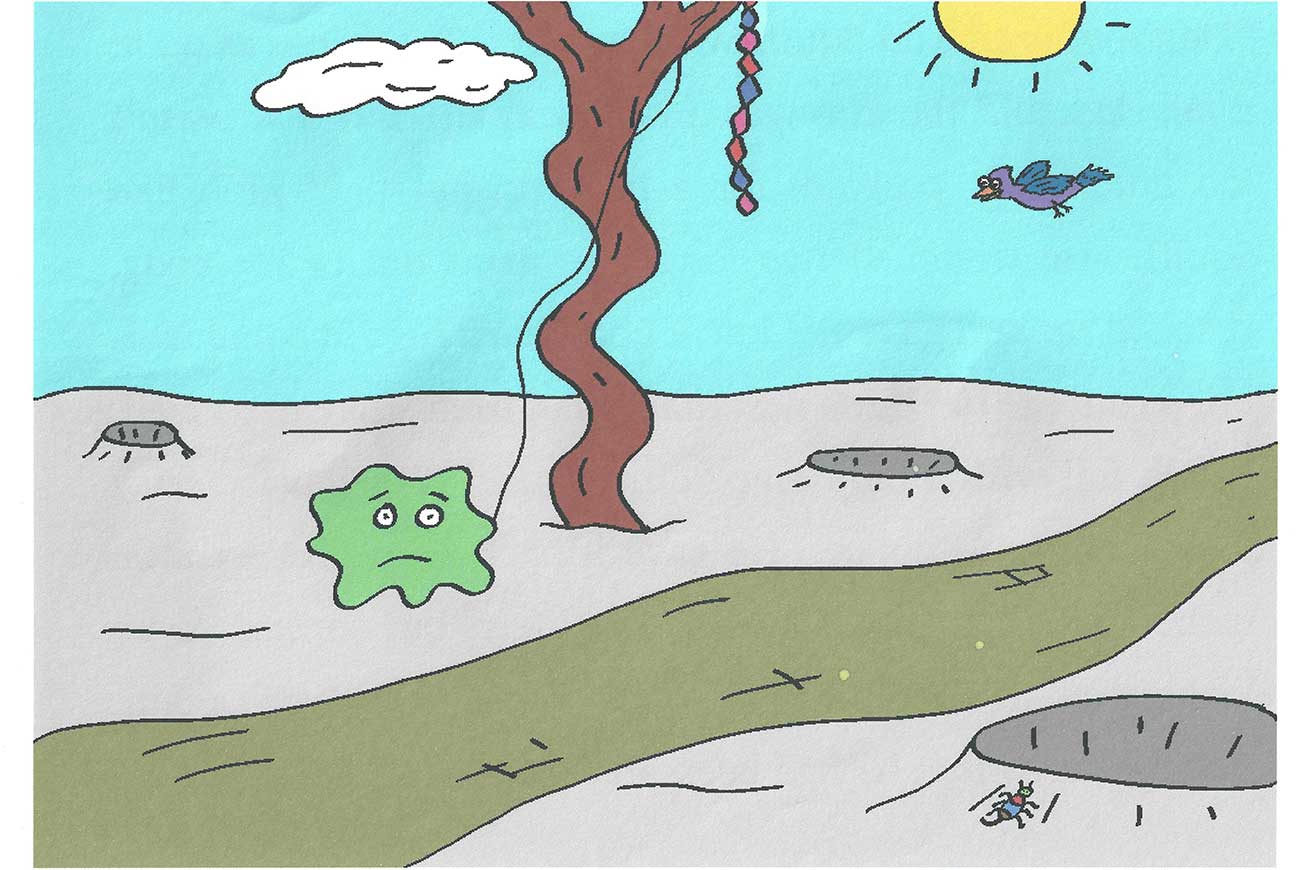 “Don’t worry,” said Squiff, with a smile. The tree was quite a tall one, and the kite was a long way up, but that wasn’t a problem for a big squishy space-blob like Squiff. He stretched two long, thin arms out of his body, reached up and gave the kite a good, hard tug. It came free, but so did the old bird’s nest that it had been stuck in. The nest fell with a plop, right onto Squiff’s head.

He gave the kite back to the happy little blob, who thanked him politely, but seemed to be looking at Squiff in a funny way. Squiff set off again, feeling glad that he had been able to help. 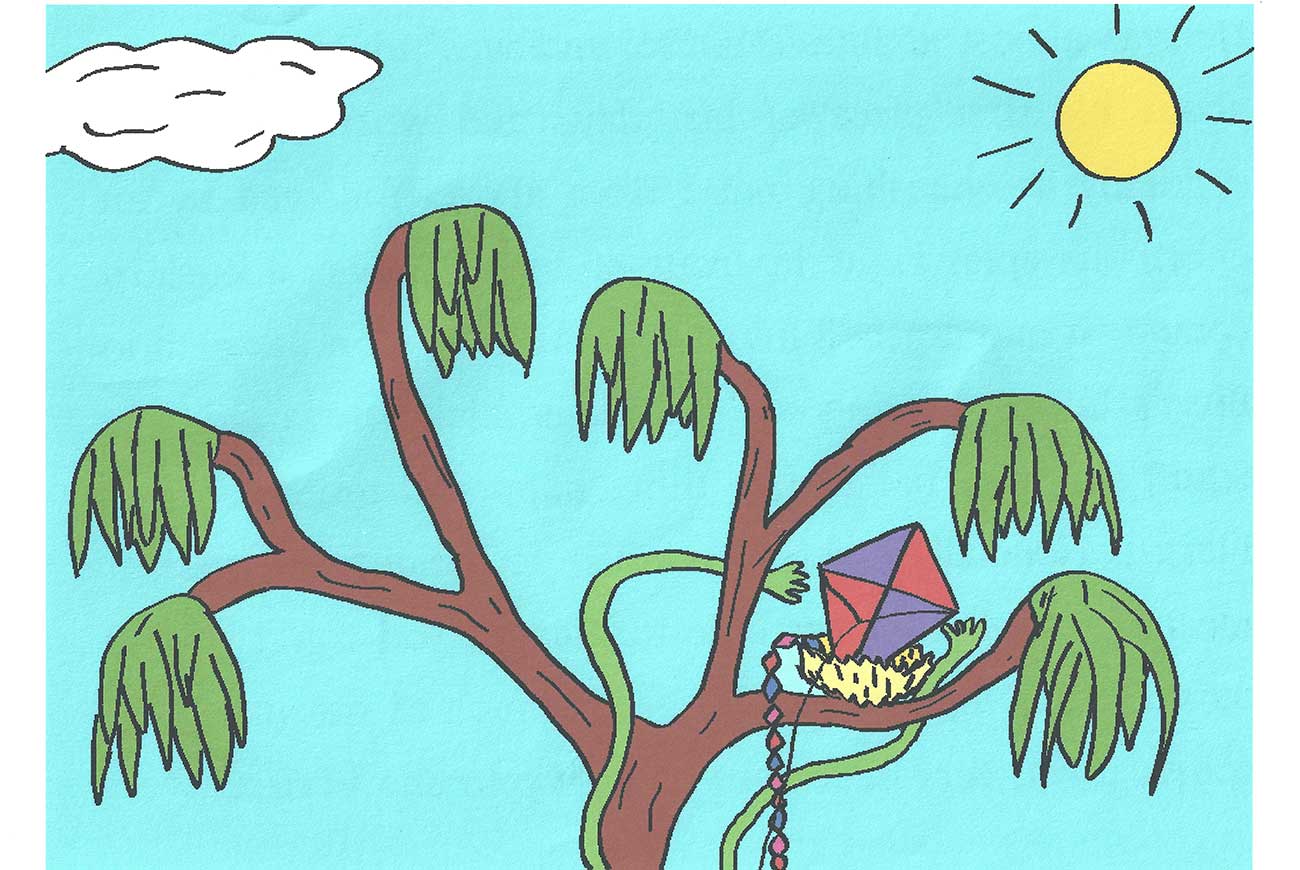 He was almost at Bitsa’s house and was thinking happily about his first piece of birthday cake, when there was a whooshing noise from above, and then an enormous SPLAT, right in front of him. It was an ice-cream comet!

The comet had crashed into the ground, right on the path to Bitsa’s house, leaving an enormous sticky mess in Squiff’s way. That sort of thing happened quite a bit on Blerg, and normally nobody minded too much, because it meant that when it was time for dessert you could just go outside with your shovel, and get as much as you liked. Of course it was very important to wash your shovel first. 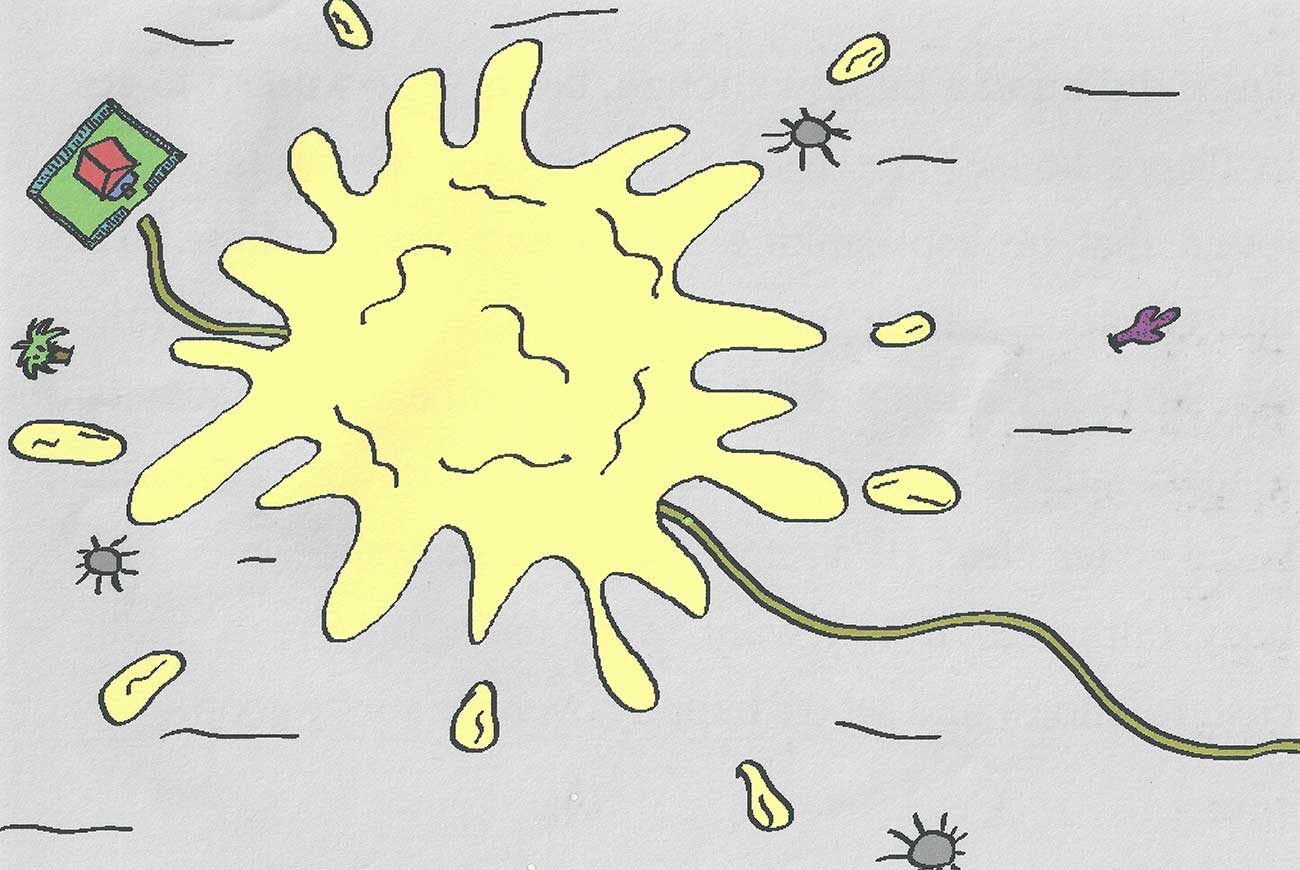 Squiff did mind a bit now though, because he wanted to get to Bitsa’s house. He tried to walk over the ice-cream, but found that he kept sinking into it and getting stuck. He thought about eating his way through, but wasn’t quite sure that he could eat that much ice-cream, plus he wanted to leave some room for party food.

Then Squiff had a better idea. He stretched two big snowshoes out of his body (although if you want to be picky, they were really ice-cream-shoes) and set off happily over the sticky goop. 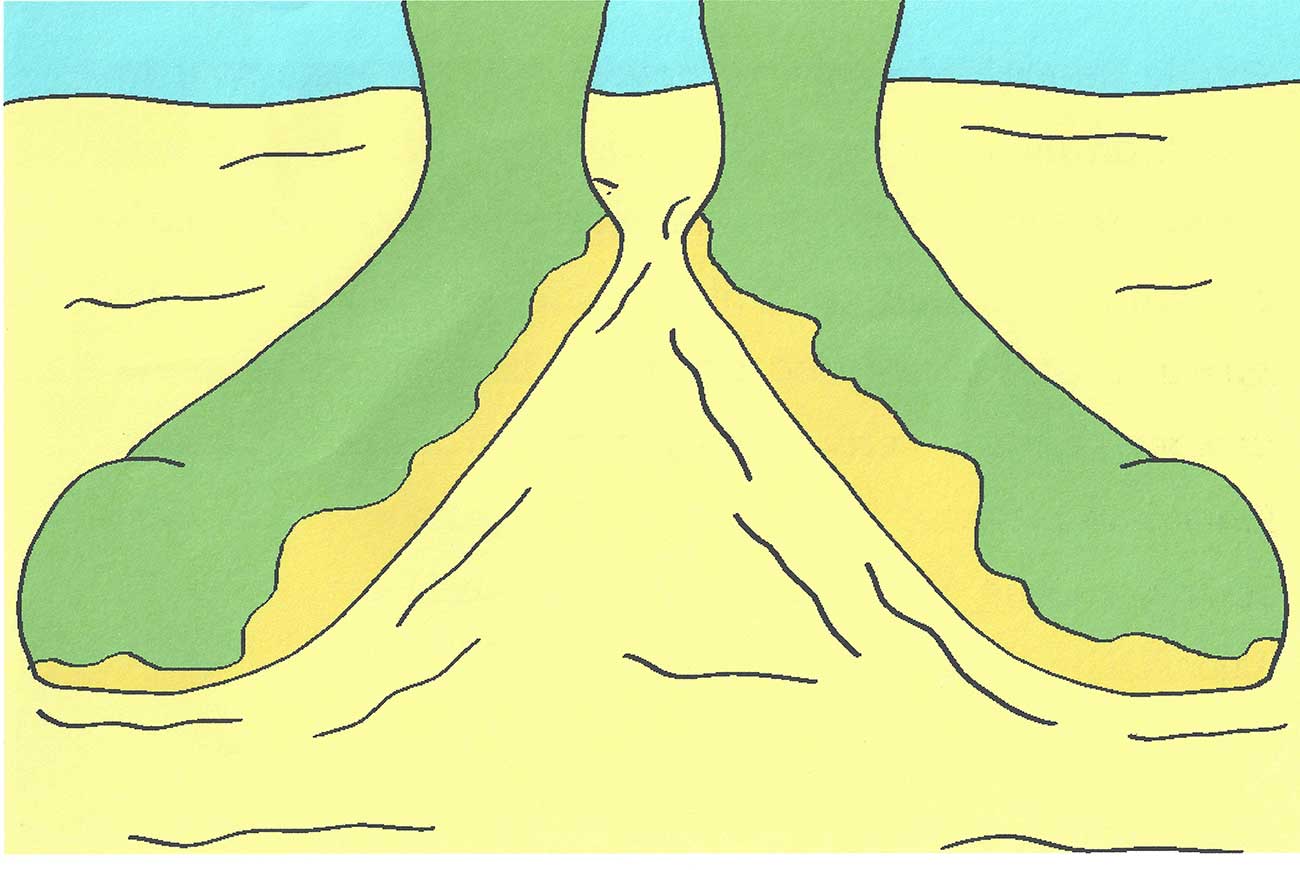 Finally, Squiff arrived at Bitsa’s house, and was just about to knock on the door, when he suddenly realised that he had forgotten something. The present! He had left Bitsa’s present at home, on the dining-room table. What was he going to do? It was too late to go back for it now, as he could hear the party already going on inside the house.

He would just have to apologise to Bitsa and give him the present the next time he saw him. Feeling a bit sad, he knocked on the door. 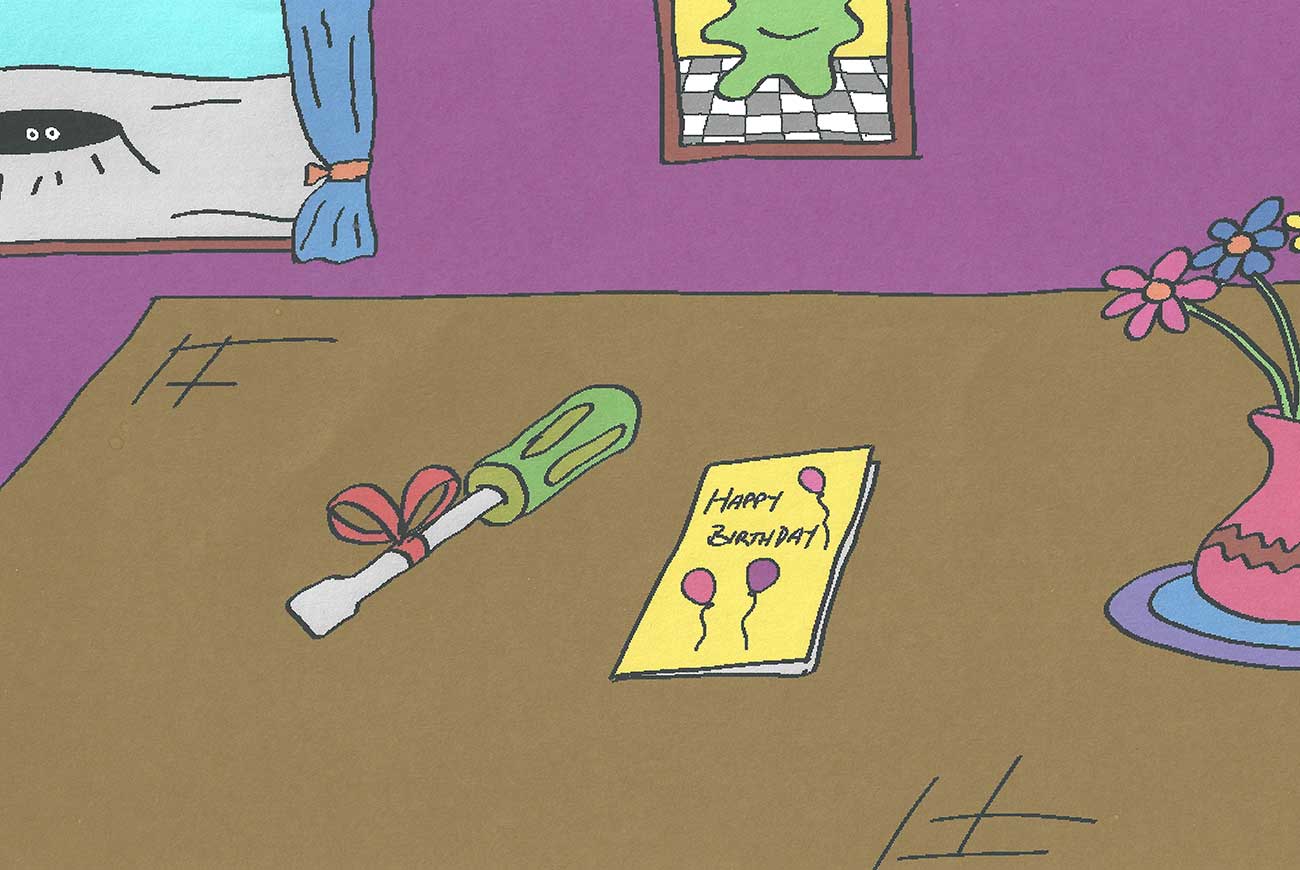 It wasn’t long before a smiling Bitsa opened the door. He looked surprised for a moment, but then his smile grew even bigger. “Hi, Squiff,” he beamed. “I’m so glad you could make it.”

Squiff looked down at the ground. “Hi, Bitsa. I’m really sorry, I forgot your-” he began, but then Bitsa interrupted him.

“And thanks for my present, too. It’s a lovely surprise.”

What on Blerg was Bitsa talking about? wondered Squiff. “What surprise?” he asked. 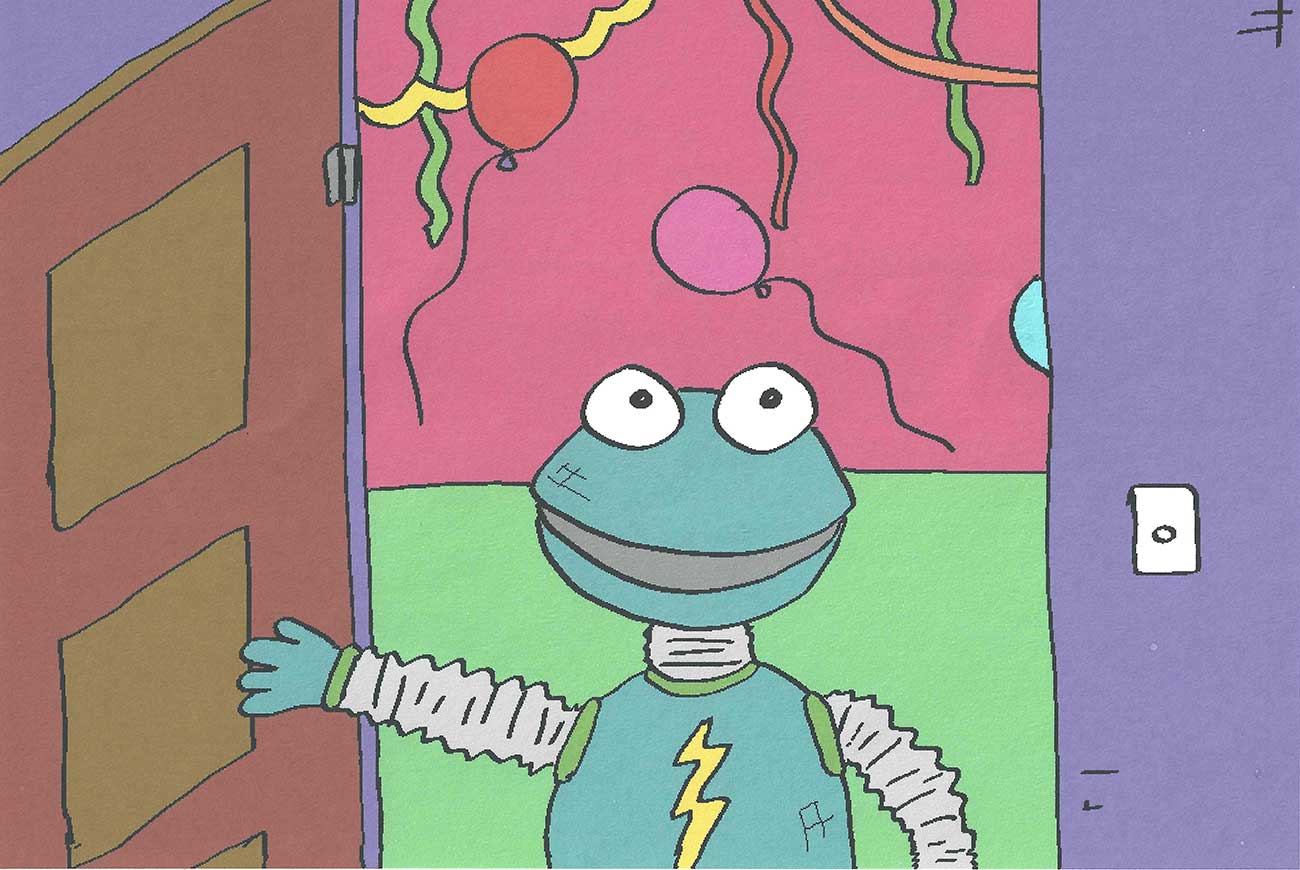 Bitsa chuckled happily. “Why, coming to my party as a clown, of course!” 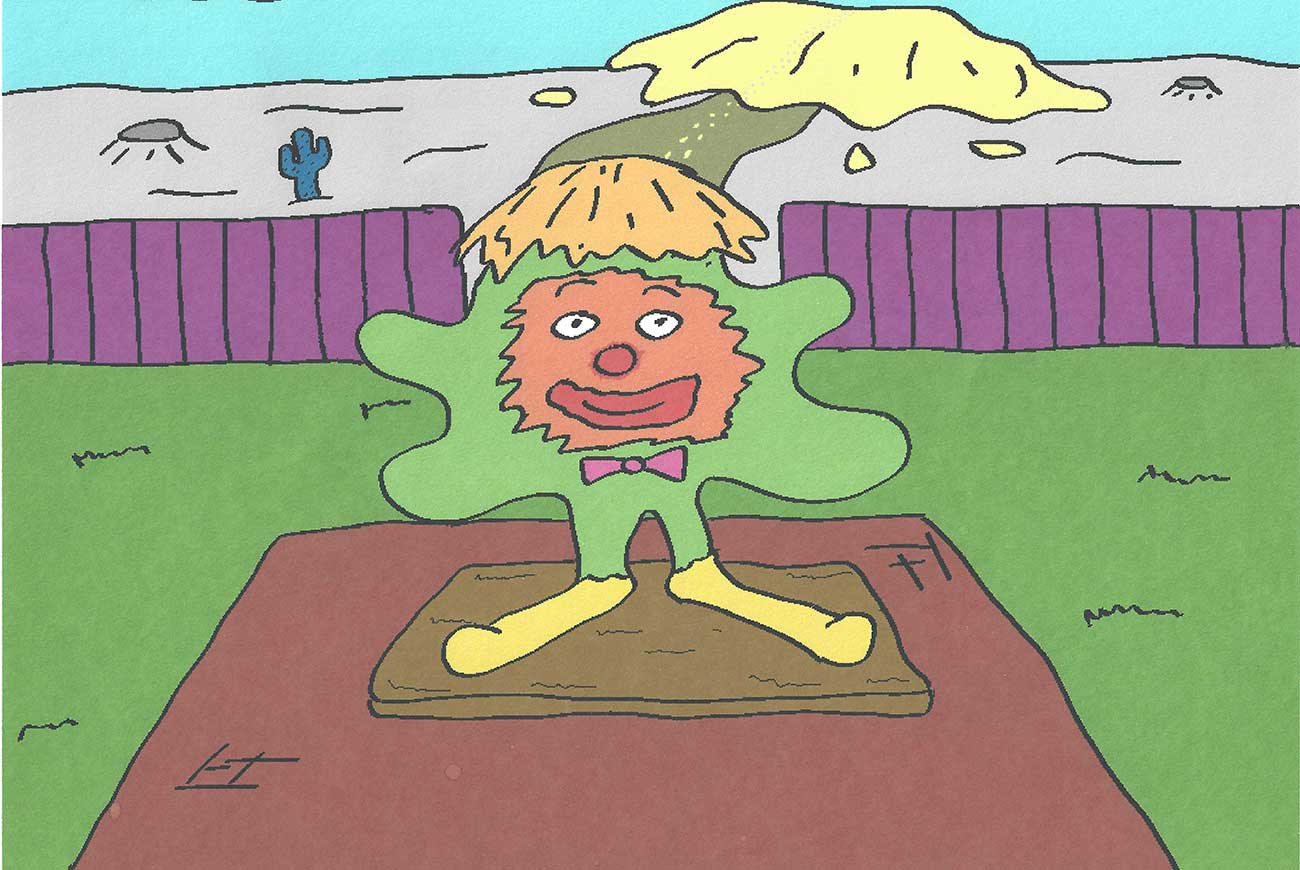 SHORT STORY FOR KIDS WRITTEN AND ILLUSTRATED BY GEOFF BLACKWELL

LET’S DISCUSS THE STORIES ~ IDEAS FOR TALKING WITH KIDS

1. Squiff has all sorts of strange things happen to him on his way to the birthday party. How might he have reacted each time he fell into an accident? How did he actually react ?

2. Squiff’s friend Bitsa is delighted to see him at the party. He didn’t see him as dirty; he saw him as a clown. What do you think this says about the different ways we can see things that happen to us in life?

3. If we can choose to see things that happen to us in a bad way or a funny or nice way, which do you think is better? Why?

The Town Mouse and the Country Mouse