The Castle was an old ruin that you could find if you followed the winding path behind Luca’s house, past the chicken coop with its startle-eyed hens, climbing up past the cobbly piles of rocks and then, through a thicket of trees. The trees cleared off then, and a space emerged that felt like it was on top of the world.

You could see all the way down to the river from there, green and high from the recent rains. On the right was the little town, its old buildings staggered like teeth that hadn’t been brushed in a while, brown and mossy. On the left, where the river coursed and disappeared, was someone’s field and a caravan park.

All of them were so far below that Luca felt sure they were apparitions: they mightn’t have existed at all, from up here. Up here the river could surge and the cars could honk their horns in the streets below and it would sound like nothing but a tickle in the ear; nothing real at all.

Even the humming of bees (Luca knew there were bees, he could smell honey from the path)… even that was louder than anything that happened below. To Luca, the Castle was a sentry that sat on top of all these unreal things. You couldn’t hear anyone call out to you up here, so it was like homework didn’t exist, and you certainly didn’t have to go home for lunch if you couldn’t hear the calls for it. The Castle was thick and impenetrable.

Luca loped up to the Castle wall, his legs stinging where he’d brushed past nettles on the path. He gave the secret tap. His friend Graca stuck her head out of the Castle and gave him a grin.

“You’ve been gone for ages-“ Luca told her.

She held out her hand, and in it was a perfect piece of quartz. It looked like an egg. It had little grey lines running through it, and it might have been moulded, it was so perfect-looking. Luca breathed a sound of amazement.

“I found it,” Graca said proudly.

“In the corner by the back. I was trying to clean it up. I thought we could make it into a little room where we could stay if it rained while we’re up here. I moved all those branches-“

And then Luca saw, by the door, all the branches and old leaves his friend had moved.

Inside, where Graca had found the egg, it was half-covered by the forgotten remnants of a roof, or perhaps a floor – it was so old that you couldn’t tell anymore. But the floor where Graca had cleaned it up looked beautiful. All the sticks and rocks and things that had fallen in were gone. Now the floor looked like a real house; just exactly like it. A house of their own. Luca was silently impressed.

“The thing is-“ said Graca confidentially. “I moved this big rock and then I found – well, come and look.”

Graca guided her friend to the other side and then Luca saw it. It was a small hole, about the size that a child could crawl through – if they were very brave, at least. Luca made an exclamation and then fell to his hands and knees, his cheek to the floor as he tried to see what was on the other side. But it was much too dark to see much at all. Just enough light lit the passage to see that the tunnel continued on a little way, and then seemed to turn a corner.

“I found the egg here,” Graca told Luca. “I thought it might be a dragon’s egg.”

“But I’ve heard of dragon’s eggs,” insisted Graca. “They’re those kinds of eggs where if you crack them, you can find crystals inside.”

That interested Luca. He sat back on his heels and thought about it.

“Why do you think there are more inside?”

“Because I found this one just on the edge of the tunnel. And look-“ here Graca pointed to a part of the tunnel he hadn’t seen yet. “Just over there, I think it’s another one.”

Luca didn’t like tight spaces. He hated wearing hats and scarves and things that made him feel closed in. When his friends made towers of bedding on rainy days, he pretended that Monopoly was more interesting. But the idea of having his own dragon’s egg was too exciting.

“Should we try and get it?” he asked, his voice wavering in his excitement and fear.

“I tried already,” Graca told him. “But I’m too big. You’re smaller than me. I think you’d fit better.”

Luca’s stomach quivered when he heard this. But he looked once more at the egg in Graca’s hand, and asked if he could hold it. Only when it was in his hand did he realize that he wanted one. More than anything. It was white and warm to the touch. It was like an animal, with its fine web of grey veins and pale beauty. If he had a dragon’s egg he would keep it in his pocket and touch it whenever he felt frightened. It seemed as though it could do magical things.

Luca decided. He stood up and took off his jacket.

When he first put his knees to the cold stone floor, he thought his heart would burst out of his mouth, he could hardly breathe with fear. As his head ducked under the low roof of stone he felt it pressing upon him, squeezing him from all sides, as though the tunnel were made of jagged teeth and he crawled into the mouth of a great cold animal. He could only make his legs and hands move forward-back, forward-back, focusing on the dragon’s egg until he held it in his hand and could crawl back out again, once more.

But when he reached the dragon’s egg, at the point where the tunnel turned, he saw something to make him gasp. A little further on, there was a glittering paleness. On turning his head he saw that there was a whole pile of dragon’s eggs, just where the tunnel emerged on the other side. It was perhaps six feet further. There was a light coming from somewhere, and in the shaft it looked like a pile of pearls, smoky and gleaming and waiting for Luca’s hands to clasp them to him; to pull them back out with him.

At the same moment, he heard an unearthly cry that he knew instantly was not his friend Graca.

“Graca?” he called weakly, for he could not turn his head, but he heard nothing in reply- she must have gone back outside for something, and could not hear him.

The sound rose again, and he realized it came from where the dragon’s eggs were. It was a howling kind of sound, which echoed in the chamber and tunnels so that it was difficult to know where exactly it emerged. At the same moment Luca became aware of a dreadful smell – a scared smell – that he knew did not come from him. It was pungent and wet, like something stagnant. Luca knew that enclosed spaces often held bats and stale puddles, but this was something warm and animal, hairy or clawed; an animal perhaps, that did not wish to share his stash of dragon’s eggs with a small boy trapped on all fours in a tiny space.

Luca’s heart was like a drumbeat in his ears. He stretched out his hand to see whether he would be able to reach any of the dragon’s eggs without going any further, but they remained mockingly, coldly out of his reach. The animal sounded again; the howl bounced off the rocks, and Luca knew then that it was the dragon itself.

A dragon lived in the space: it was evident to him now.

Firstly there was the profusion of eggs to tell him so. Secondly he began to hear a scratching sound amongst the howling. Luca felt a chill pass over him. His hair stood up on his forearms. He gripped the egg he already had and decided to retreat. He didn’t want to face a dragon, even if the pile of eggs beckoned him to take them all, to keep them like jewels; to be admired above, where they belonged.

Luca had just began to move backwards when the dragon made a loud cry and something in the tone of it made him stop. The boy stayed there, heart beating, skin tingling, listening. When the dragon did it a second time, Luca knew he was not mistaken. The dragon was in pain.

The boy could not swallow. He was trapped in a tunnel of broken stones, and did not want to advance. Yet he couldn’t leave an animal that was sad like that; he heard every kind of sorrow in its cry. As if to show its piteousness, a blast of hot breath charged into the tunnel. It was a sick smell. Luca knew what he had to do.

Heart beating, he slowly crawled closer to the dragon. The dragon made a weeping sound. Luca peered around the corner and saw the dragon, fat and furry, sprawled on a pile of stones.

It was Buster, the teacher’s dog. Looking up, Luca saw that it had fallen through a hole in the ceiling and couldn’t move from where it had fallen.

Buster whimpered as Luca crawled over to him. He petted him and smelt, in the passionate hot breaths, in the stinking licks, the dog’s relief at being found. The dog had been much more scared than Luca had ever been.

Luca lifted himself from the hole in the ceiling and surprised Graca, who was digging around out the front of the Castle. They searched out Graca’s mother, who came and rescued Buster. Afterwards, they went back and recovered the dragon’s eggs, all sixteen of them, and put them in a glorious mountain of treasure inside their new play home.

Graca later suggested they split one, and they did it with a stone. But inside was nothing but stone, white and seamed with little grey lines, exactly the same as the outside had been.

“Let’s not split any more,” said Luca. “I like them better when we don’t know.”

And the fifteen remaining dragon’s eggs stayed in the newly-cleaned corner of the Castle ever afterwards, admired by all, but gleaming still, keeping their secrets.

Audio story read by Trudi Baldwin, with thanks.

1. Luca was frightened of the sounds of the dragon that he heard coming from inside the ruined castle, but he went to investigate anyway. Have you ever done something, even though you were scared to do it? What made you show courage?

2. Luca tried to see the dragon because he thought it was hurt. Do you think this was the right thing to do? Why or why not?

3. If someone or something is in trouble and needs help, other people or animals often help out. Why do you think people and animals help others? 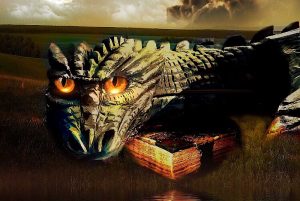 Luca conquers his fears when searching for dragon's eggs in a ruined castle.

Why The Autumn Leaves Are Red