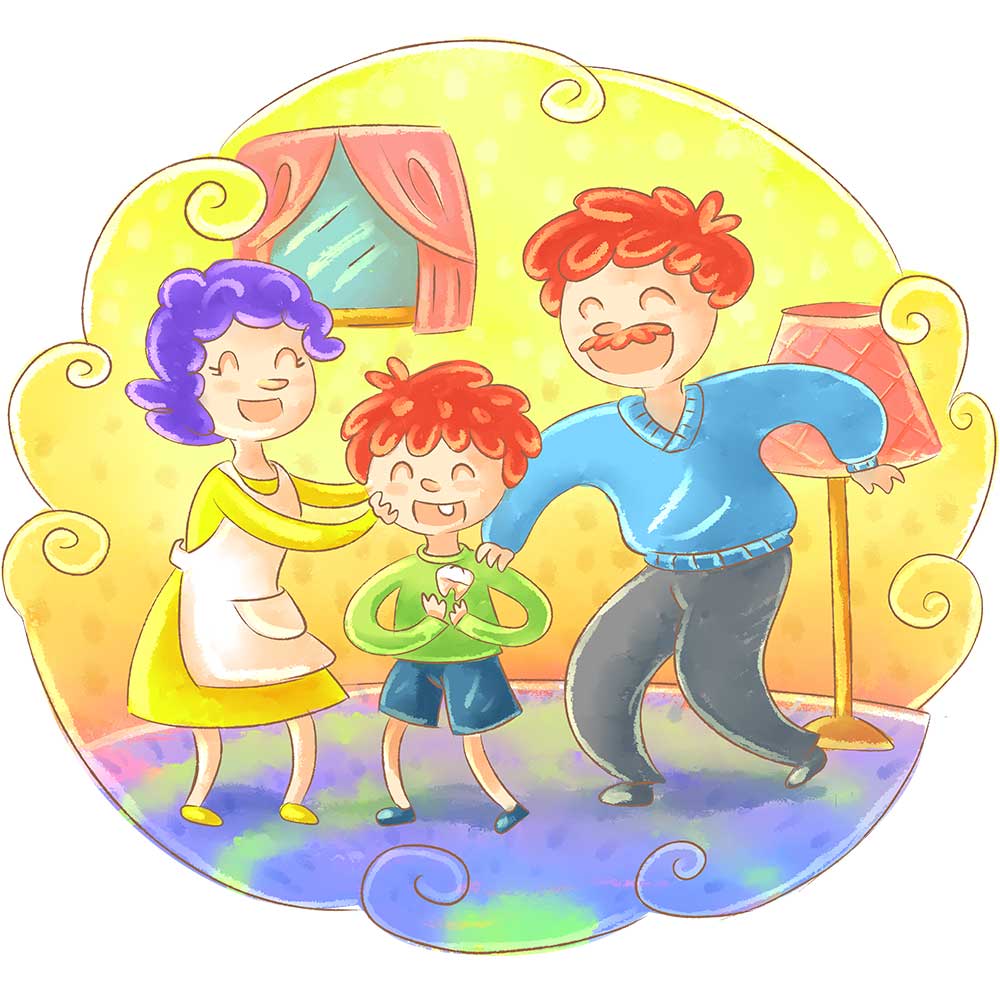 The first time I lost my tooth, my parents got excited.

“Do you know what this means?” they said.

“You need to write a letter. To the toothfairy!” they exclaimed. 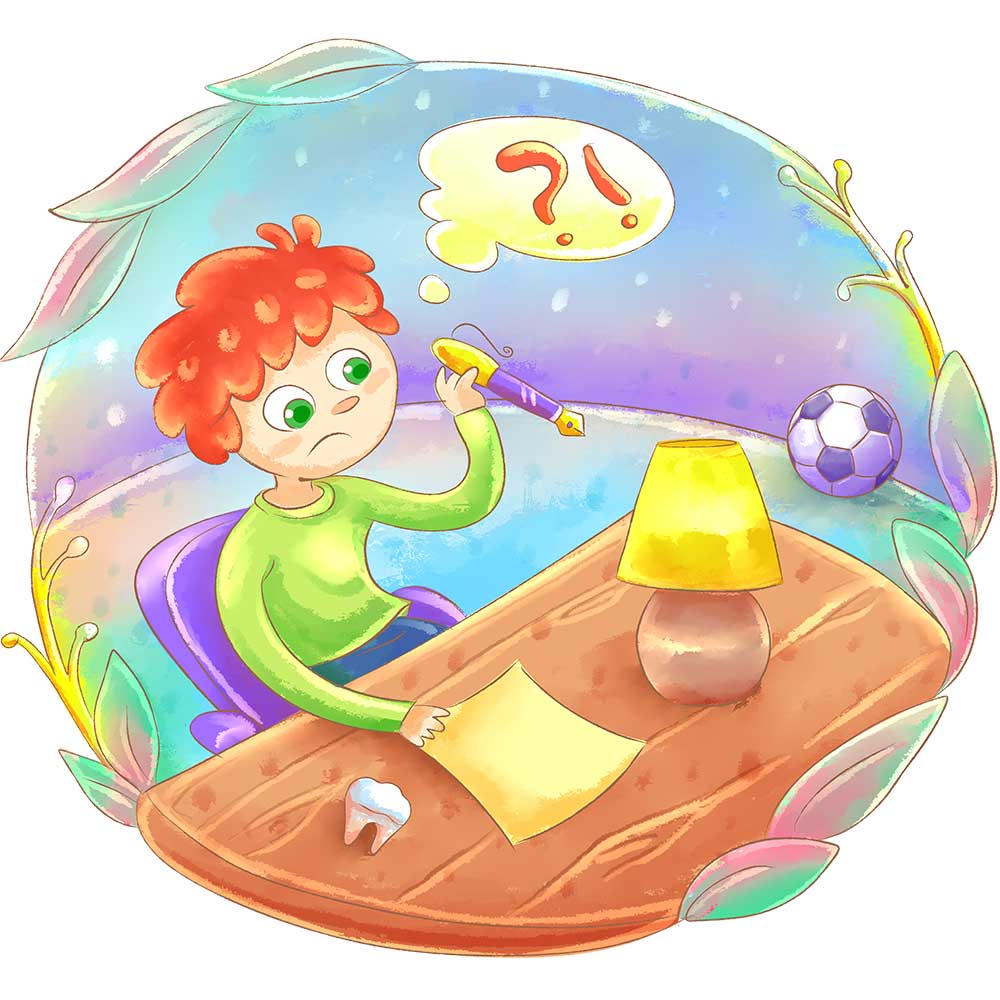 I was given a pen and a piece of paper, and suddenly, there I was, having to write a letter to this fairy that I didn’t even know. I mean, I didn’t even know what she looked like, or what her name was, or how she got into our house. I didn’t know what she wanted to do with my tooth, either. If you asked me, it sounded weird, a fairy collecting teeth like that.

But I didn’t want to disappoint my parents. They looked so extremely excited. So I took the pen and the paper and I wrote just one thing:

Then I went to bed. I put my tooth in a cup. And the next morning she wrote back to me, and this is what she wrote: 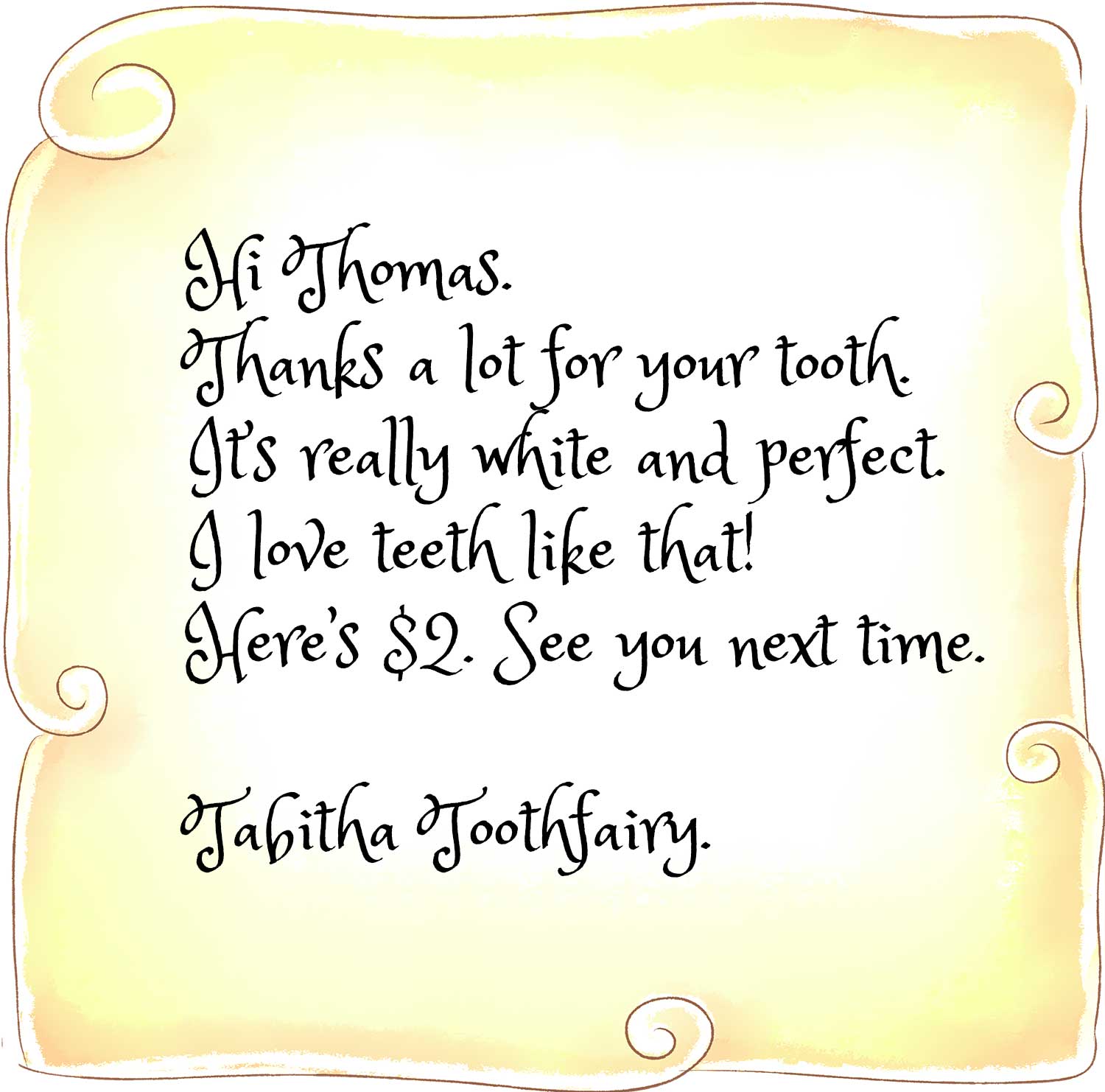 Her writing was all wiggly like she’d written it on a bumpy surface. I thought she must have been pretty small after all, and it was probably wiggly because she’d have trouble moving the pen. It must be just about the same size as her. Still, though it was interesting, I had other things to do. Like homework, and riding my bike. 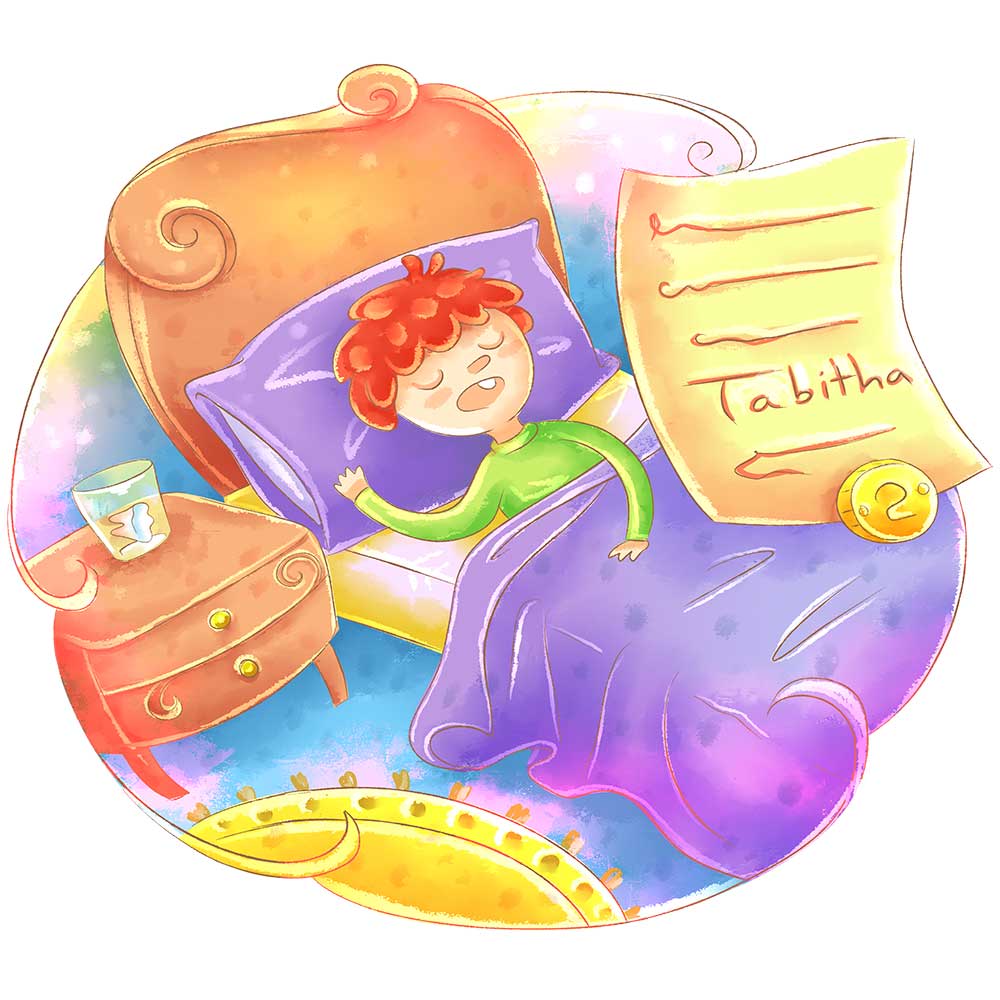 I put the letter away in my drawer and forgot all about her for a while. Then I lost another tooth. Mum and Dad were all thrilled and wanted me to write to Tabitha all over again. Out came the pen and paper. I honestly didn’t know what to write. I wondered where she had got into my bedroom. I didn’t know how I felt about some random toothfairy sneaking into my bedroom whenever she felt like it, and stealing off with my teeth.

So I sucked my pen and thought a bit. Then I wrote this: 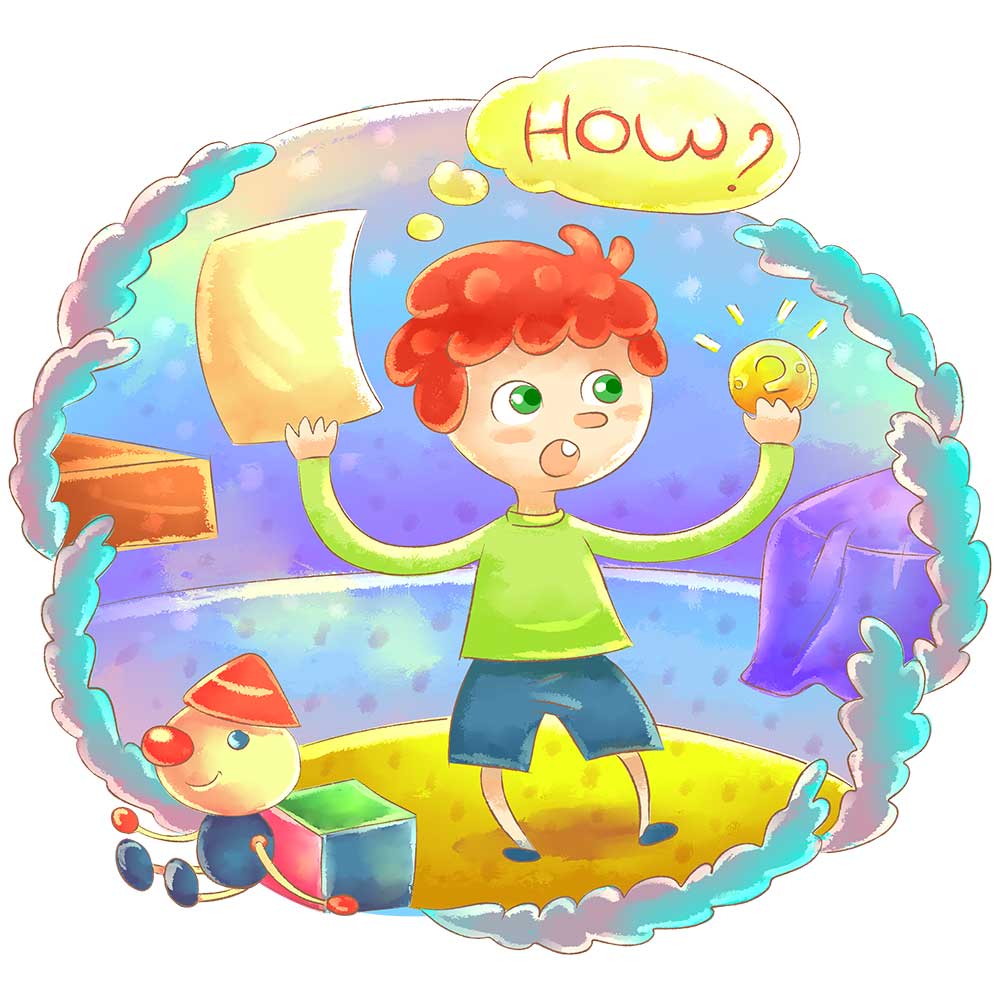 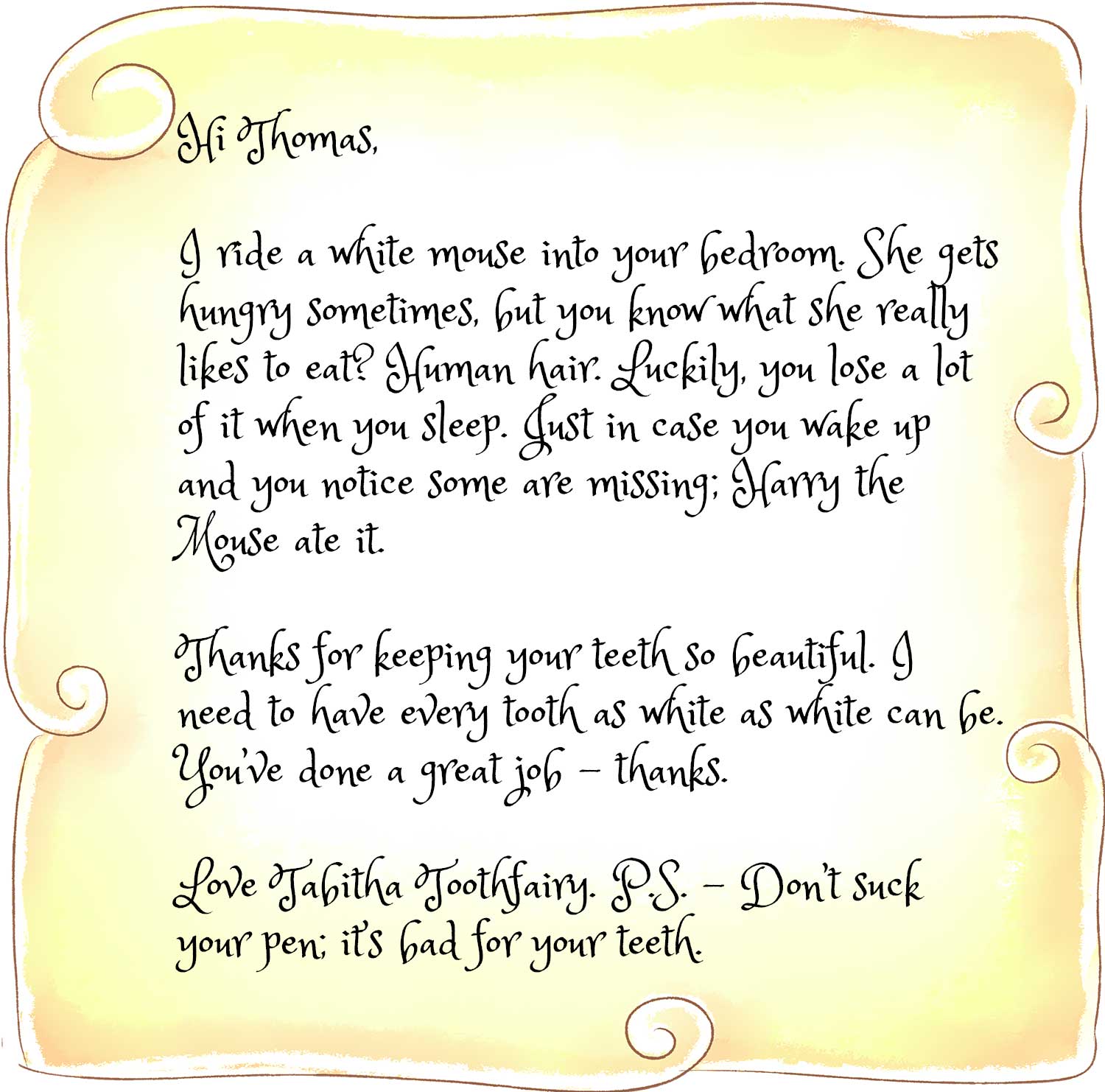 “Human hair?” I exclaimed, scrunching up my nose. “She said her mouse eats human hair!”

“I wouldn’t worry about it,” said Mum. “If you were extra concerned, you could just leave your hairbrush next to the bed next time you lose a tooth.” 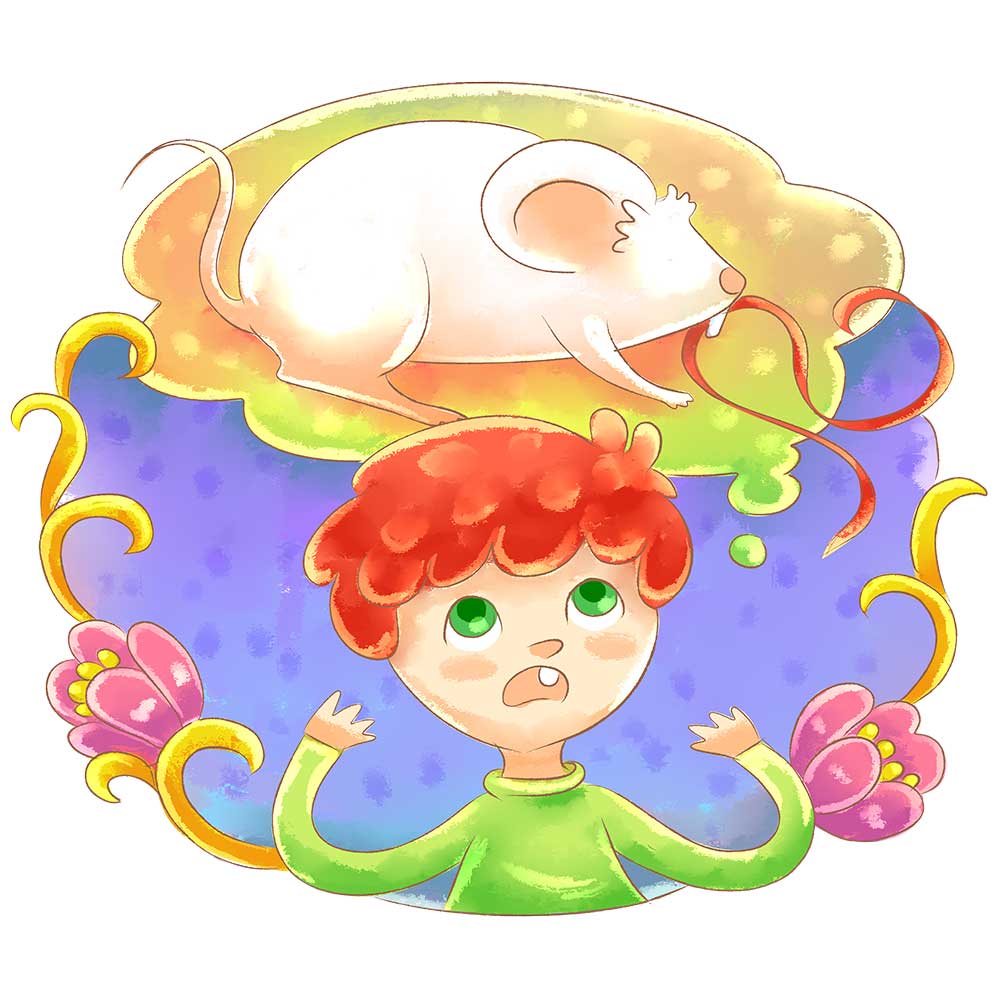 “And how did she know I sucked my pen? It sounds like she’s watching me. That’s a creepy thing to do.”

“She probably just used your pen to write back to you,” Mum said. “I’ve told you a hundred times not to suck your pen too. You’re making the lid all crimpy.” 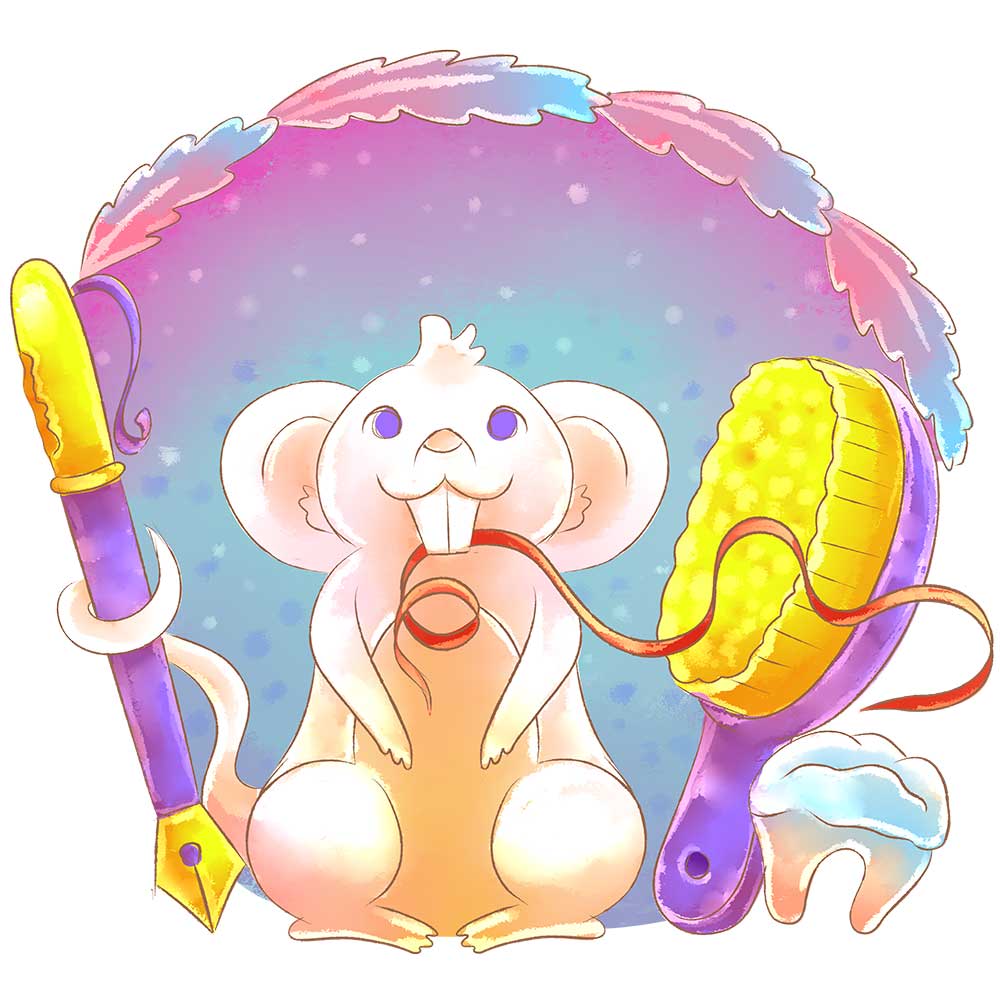 I sank back into my chair. I felt a bit strange.

“But what do you think she’s doing with all those teeth?” I asked, feeling my gum with my tongue. Mum shrugged.

“Who knows? Maybe you should ask her.”

Hmm, I thought. Maybe I would.

But it took a bit of time for my next tooth to fall out. By the time it did, two months had passed, and I’d forgotten all about the mouse that walks around my bedroom eating human hair, and the toothfairy that hangs out watching me suck my pen.

But when the tooth fell out and I had it in my hand, I felt the scratchy bottom of it and remembered all over again what I wanted to ask Tabitha about her night-time… activities. 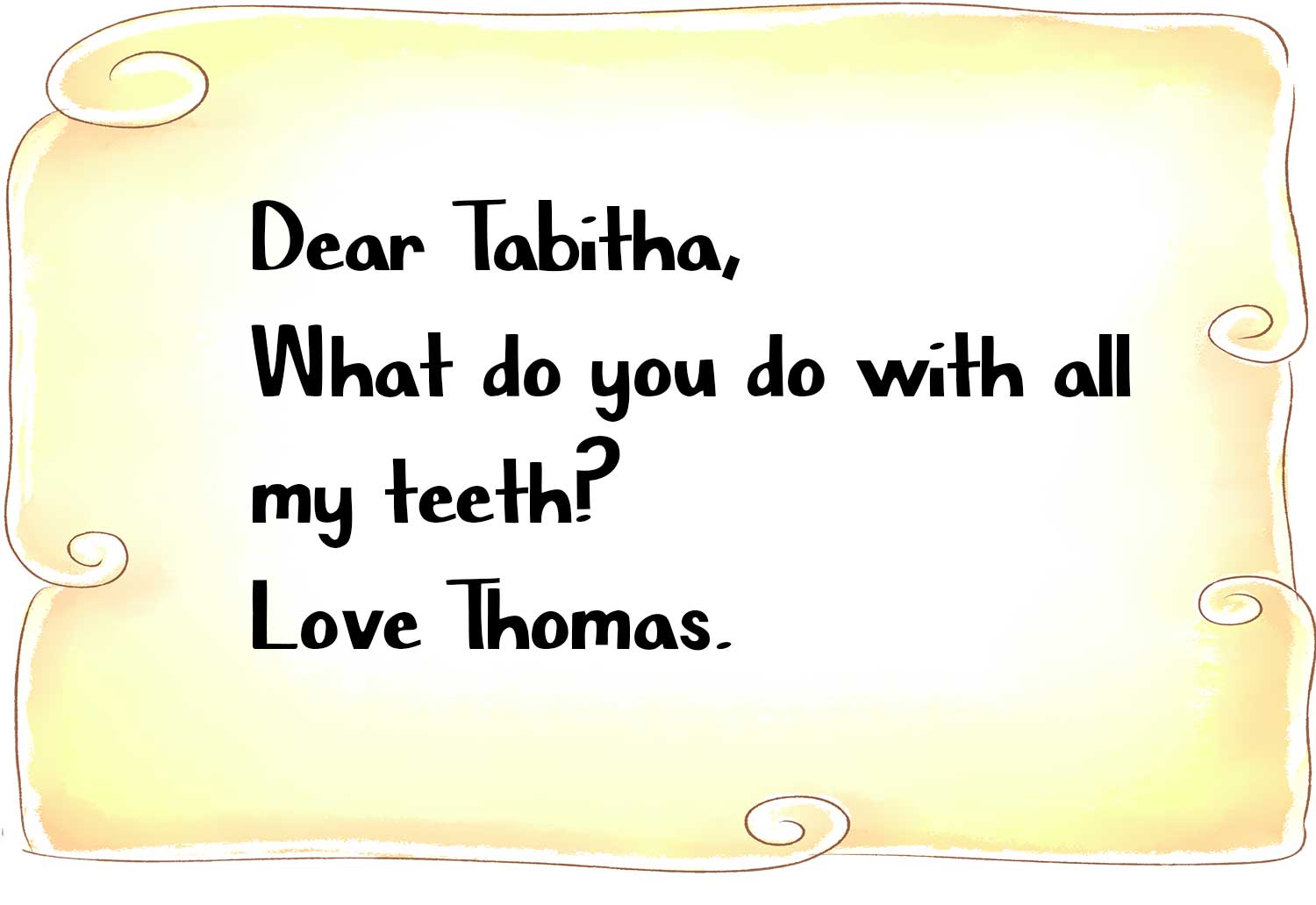 The next letter was tucked right under my ear when I woke up, as if she wanted to make extra sure I would find it. 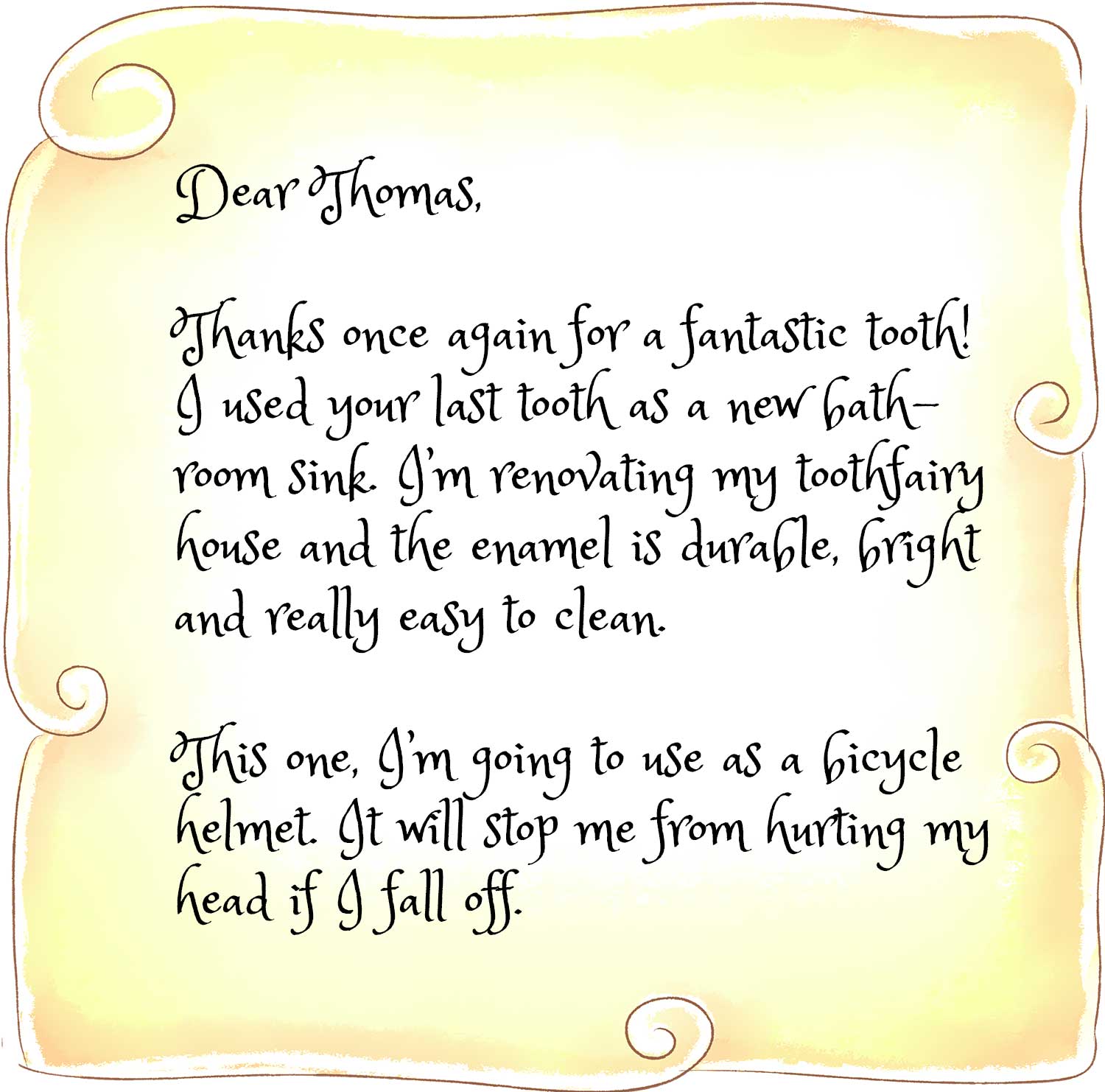 She was really a piece of work, this Toothfairy. It was all too strange. I couldn’t wait for another tooth to fall out, so I wrote back to her that night. 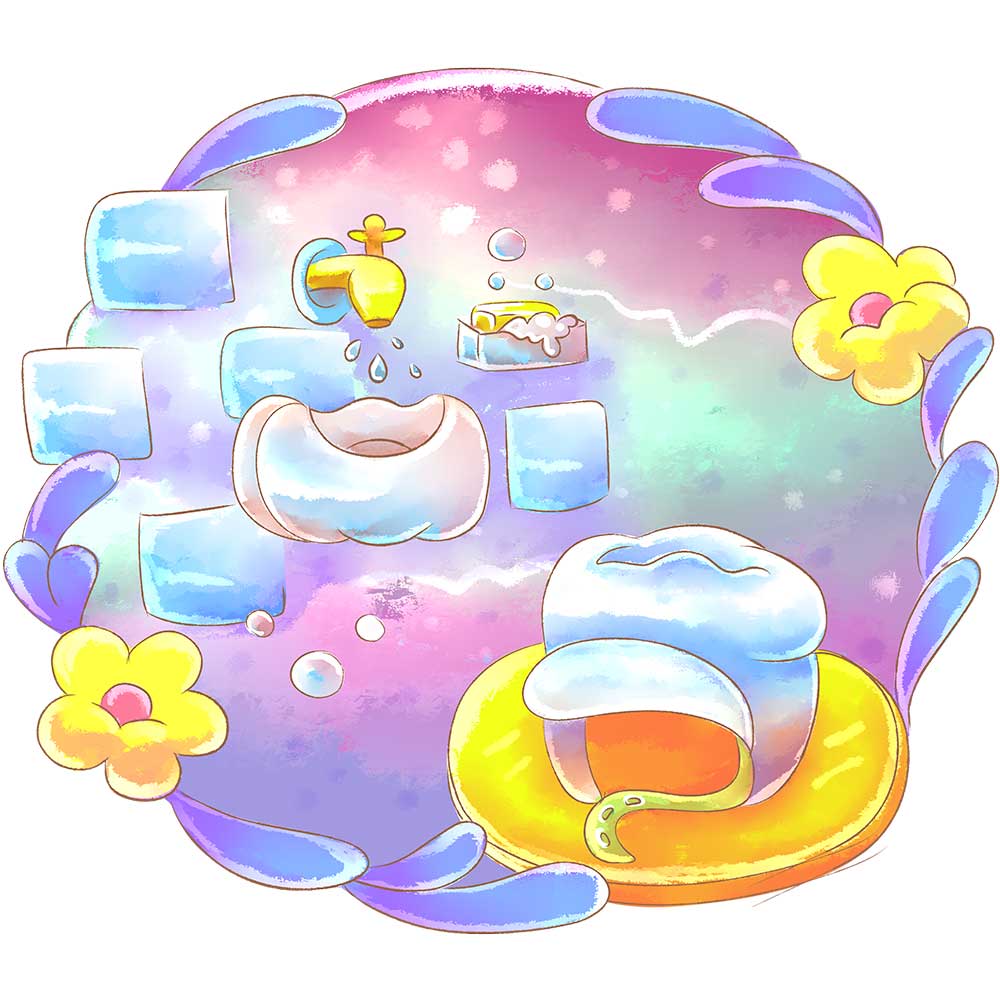 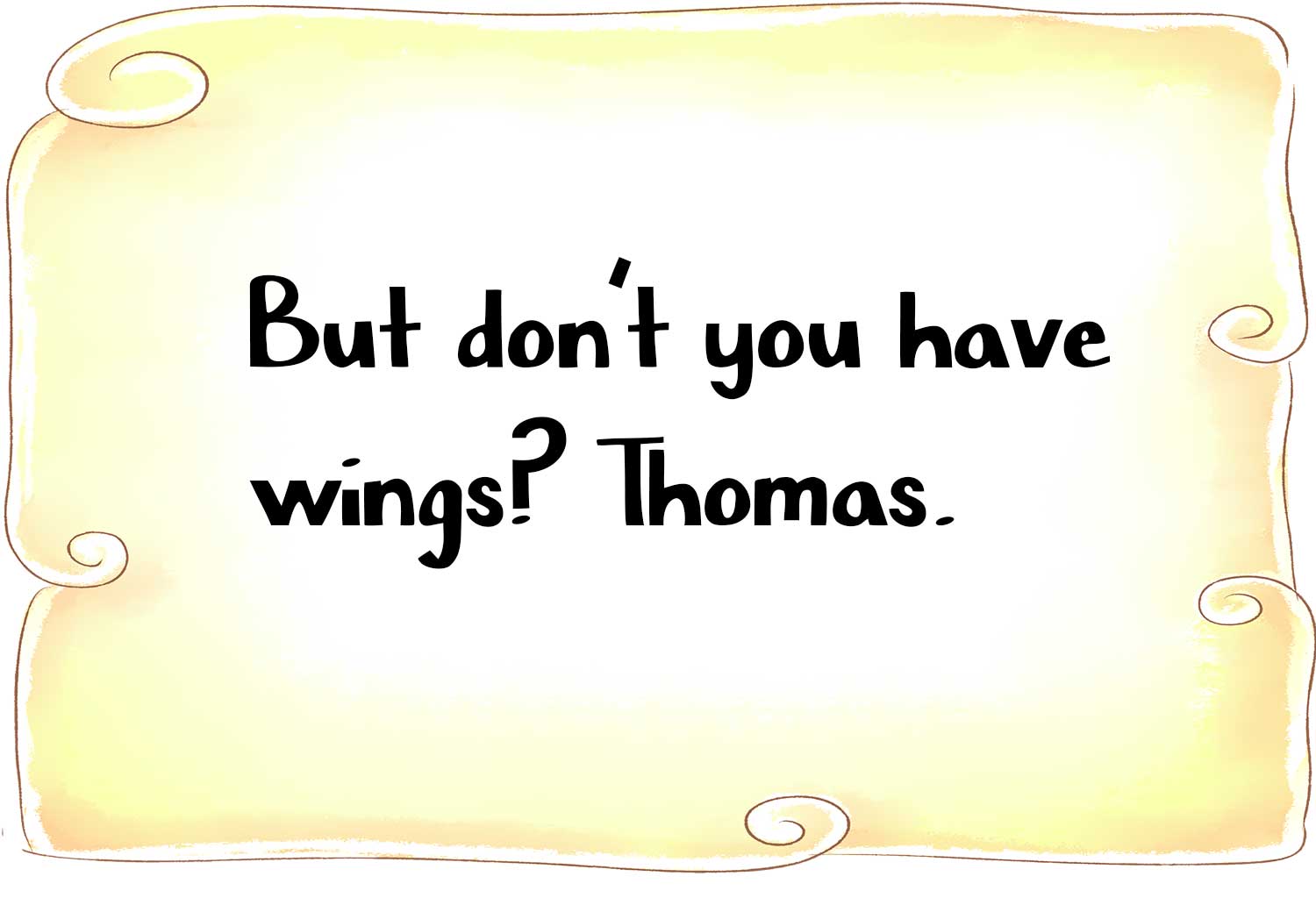 Then the next morning she wrote back: 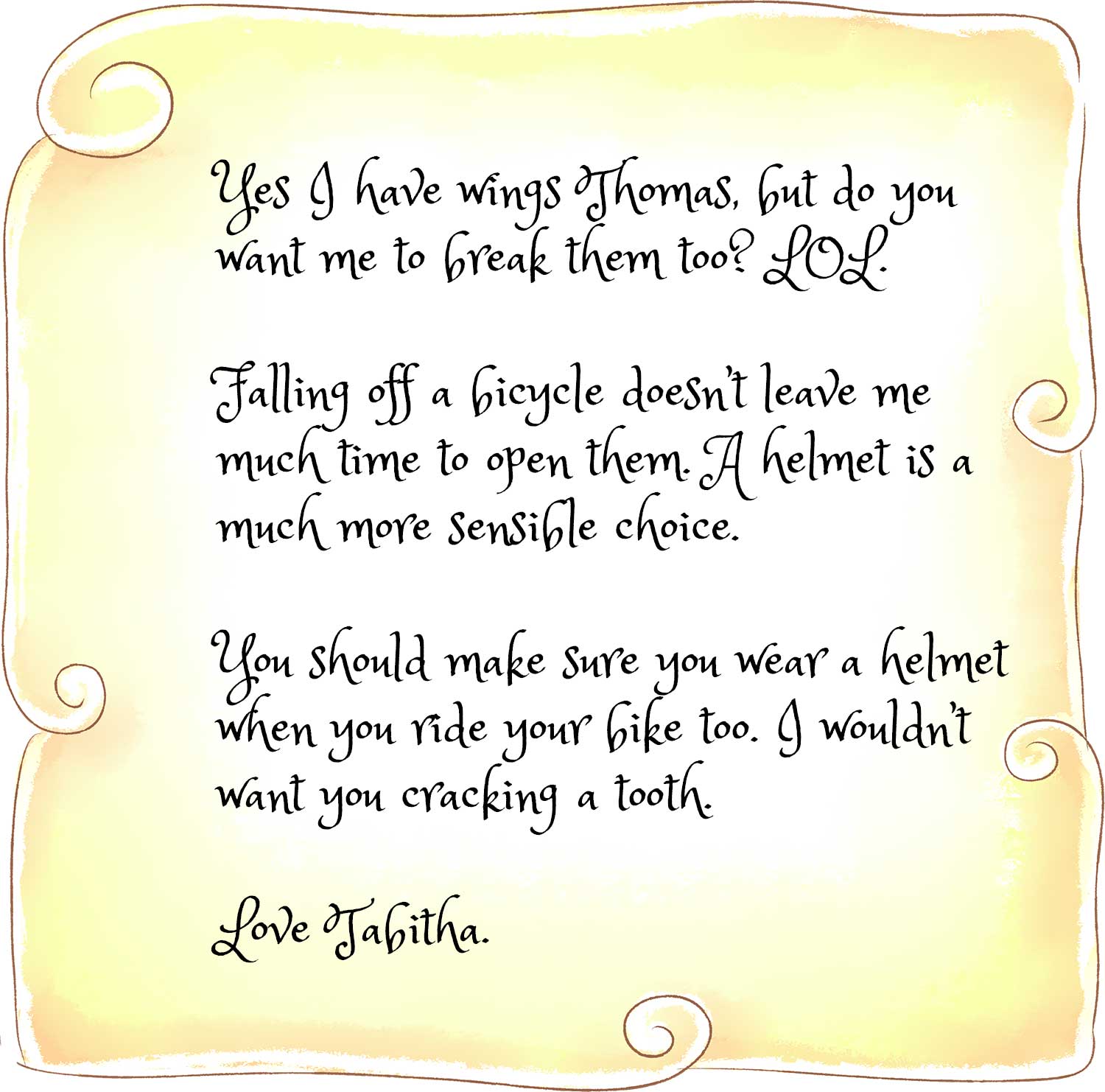 It still didn’t add up for me. I persisted. I wrote to her again. 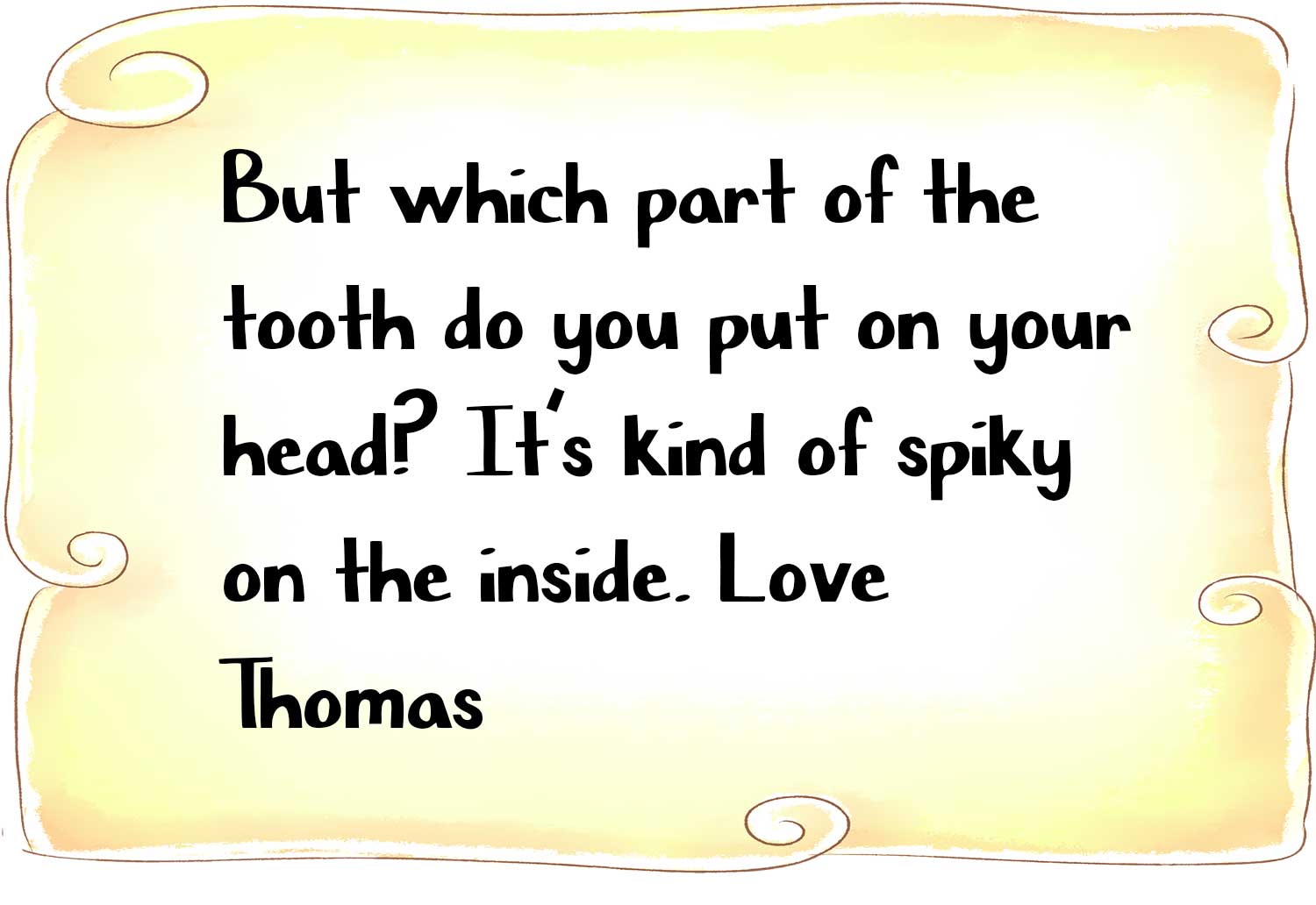 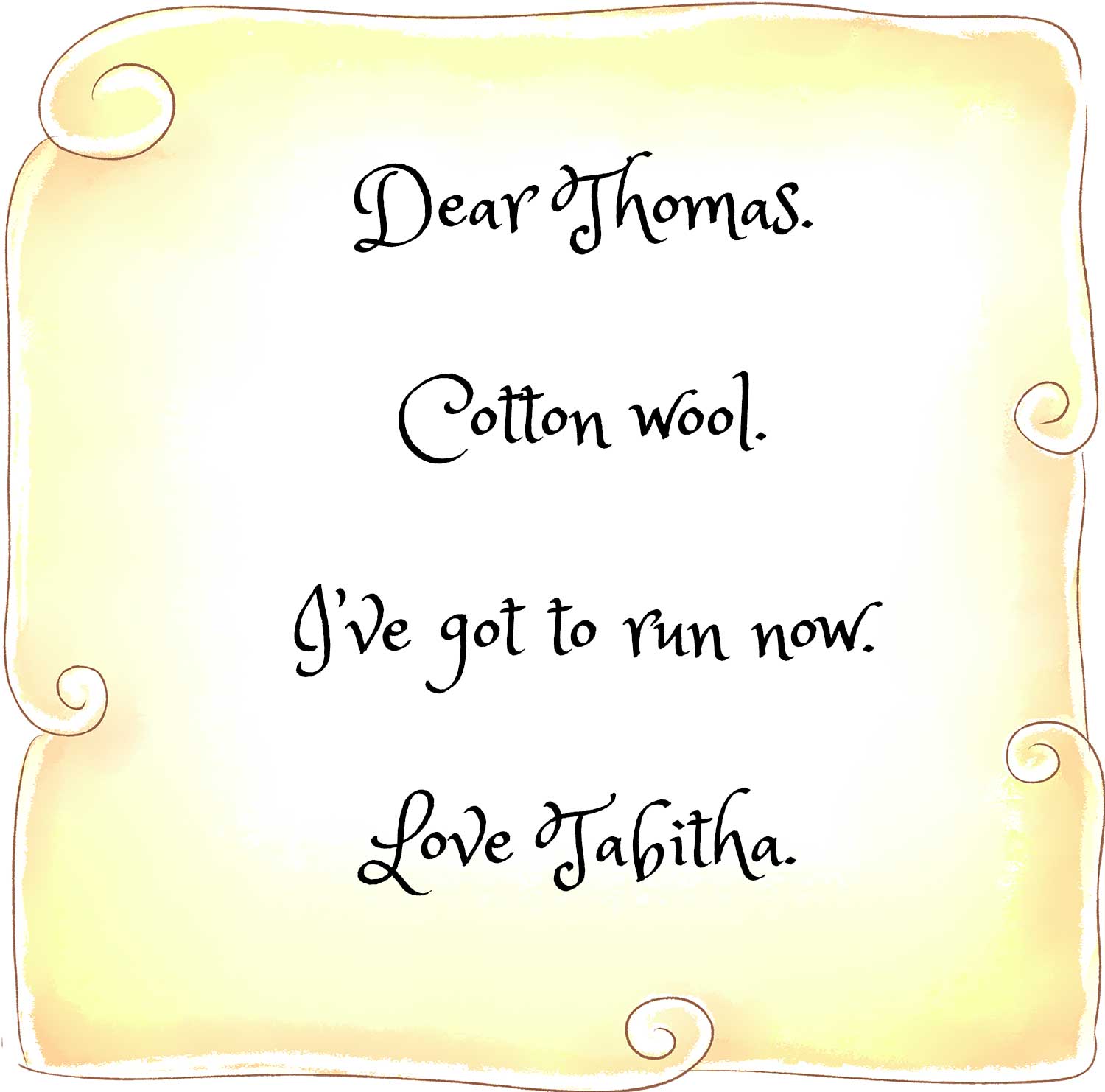 Got to run. Now does that sound like the kind of thing a tooth fairy would say to you? Not ‘I’ve got to fly’, but I’ve got to run. As hard as I tried, I couldn’t imagine a toothfairy running when she had these brilliant wings. I know I wouldn’t. So why would she say something like got to run? Unless there was something more to this toothfairy than she was letting on. 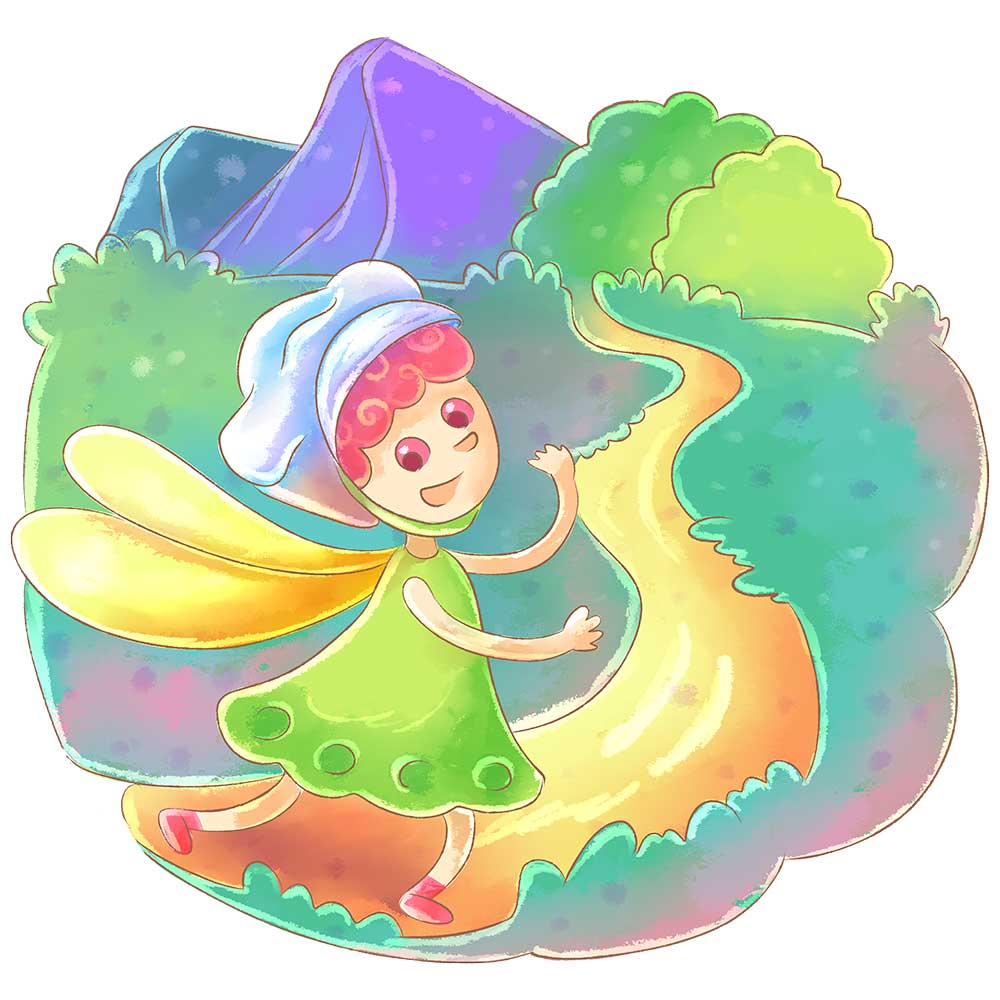 I waited, and pressed my tongue against my teeth, and ate lots of hard foods, and waited for another tooth to fall out. Luckily I didn’t have to wait too long. There is was in my hand, tiny and white and perfect, just like Tabitha would love.

I took extremely good care of the tooth all that day. I lost it at school but I wrapped it in a tissue and I didn’t let it out of my hand once. Handwriting, mathematics, none of it mattered… I just swapped that little tooth into my other hand and kept on writing.

When I got home I put it in the glass of water and went to bed early. Mum and Dad were surprised but didn’t say anything. My letter this time was simple: 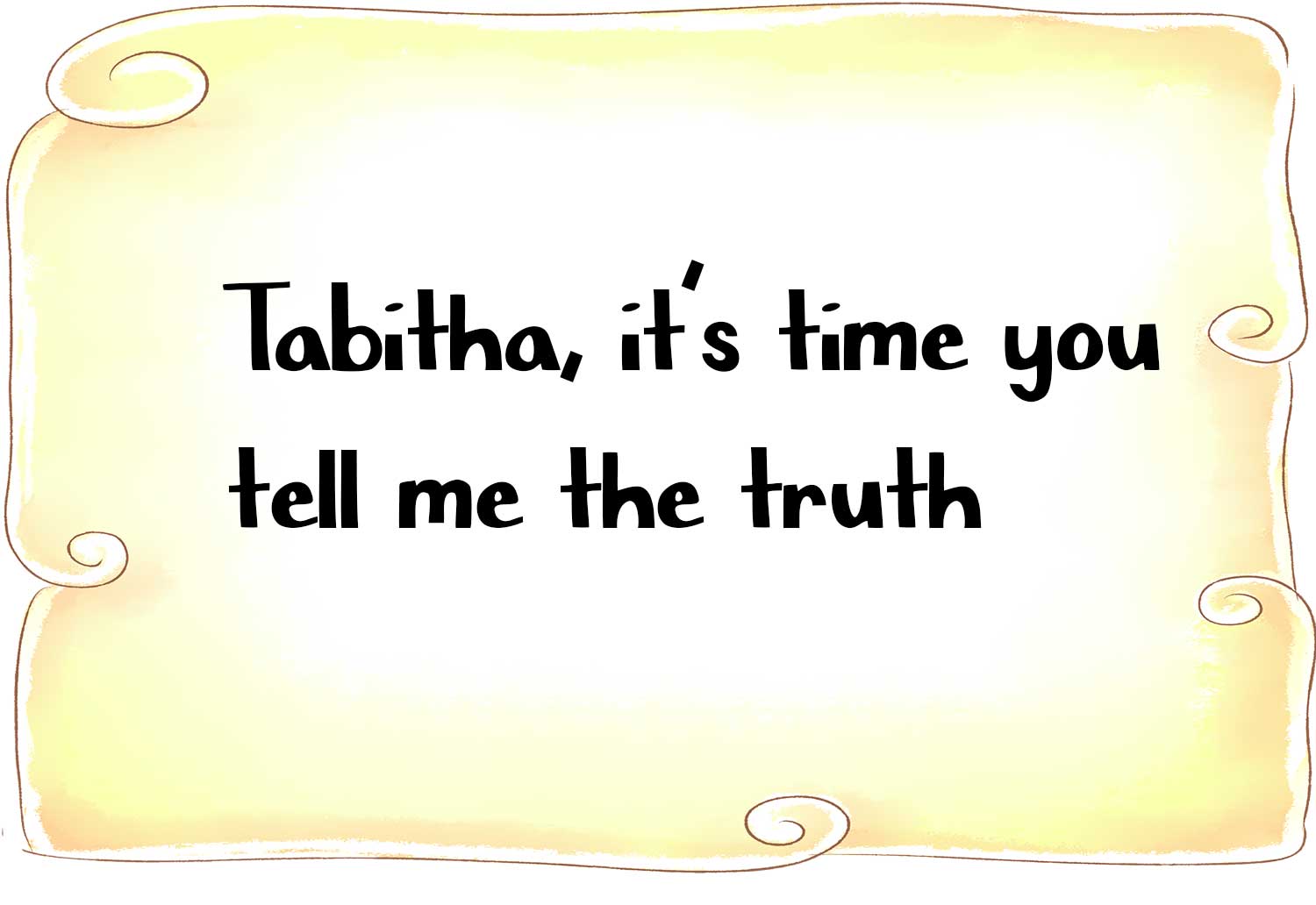 Then I started the second part of my plan. I wasn’t going to sleep that night. At all. I was going to wait and see this Tabitha Toothfairy for myself. 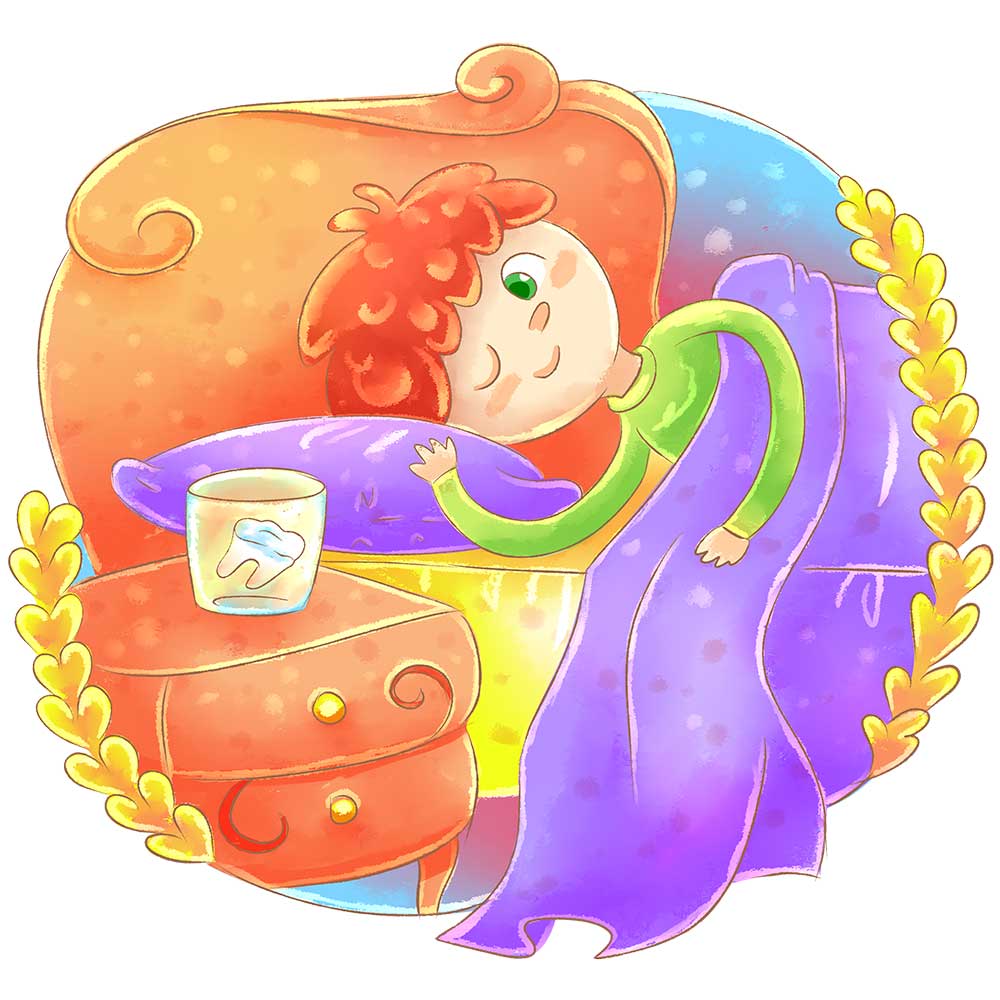 It was hard going. I played games in my head to keep myself awake. Games where I was chasing white mice with a saucepan; where I swatted at a little fairy with long green hair, buzzing around my head like a dragonfly.

I really did see her.

The moonlight wasn’t playing tricks on my eyes; she was as solid as could be.

The toothfairy was real. 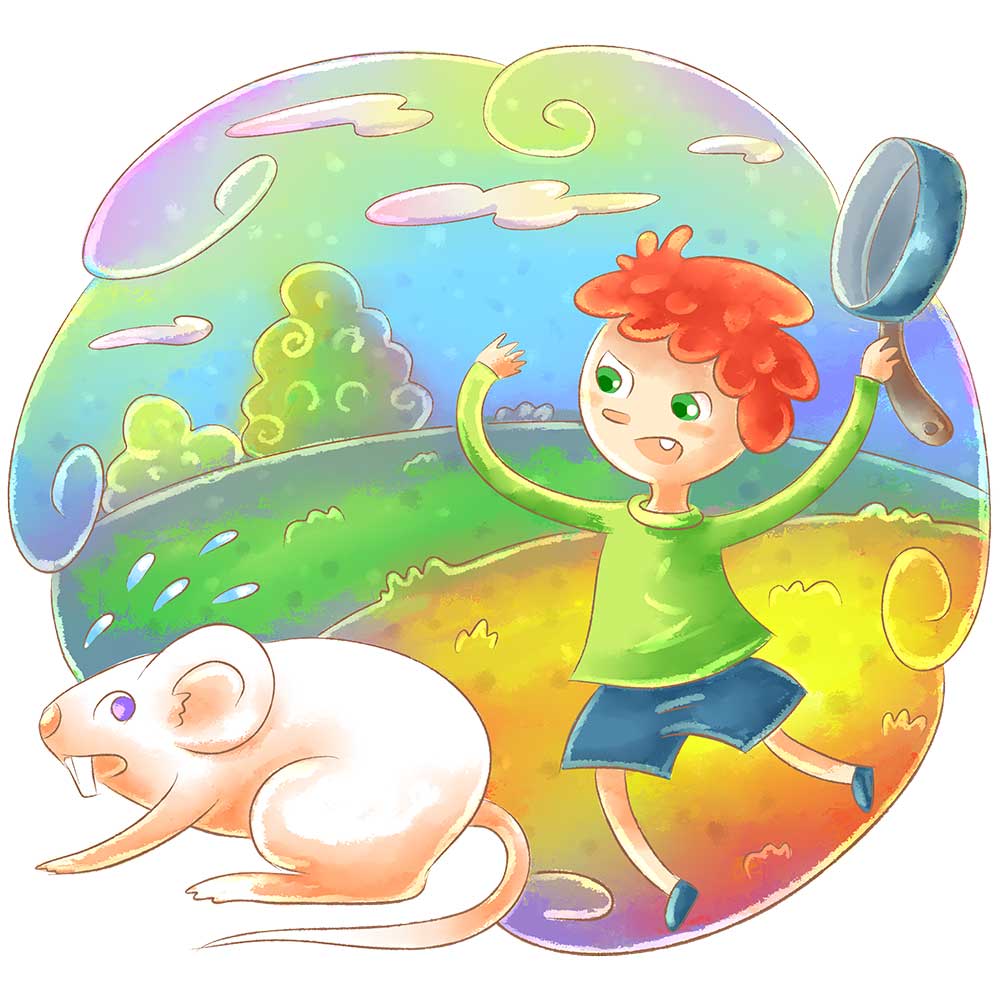 She was riding her little white mouse Harry like she was a cowboy; she had bright pink boots that she dug into his side when she changed direction. The mouse didn’t seem to mind it though; his kind little eyes winked as though he was smiling. Strapped to the mouse’s back , behind where Tabitha was sitting, was a pouch with my $2 coin in it.

Tabitha pulled the mouse up to beside my pillow and looked at me sternly. “You’re not supposed to be awake!” she scolded. “Harry told me you were, but I didn’t believe him. ‘Not Thomas,” I said to him. ‘Thomas’s a great kid; he wouldn’t cheat us.”

Harry made an accompanying squeak; he was going cranky on me too. 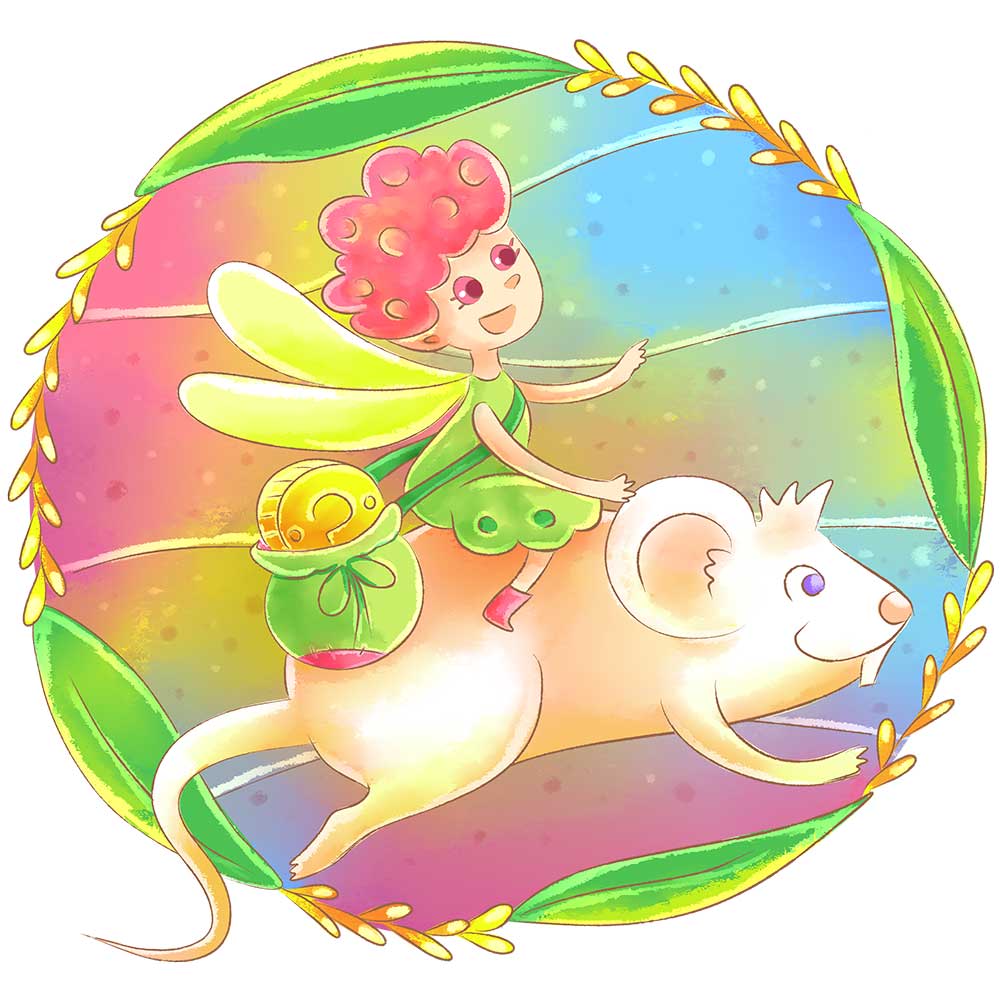 Suddenly Tabitha’s face turned ominous. I felt a chill pass over me.

Tabitha looked at me coldly. Her voice was low and chill.

“Do you know the penalty for breaking the rules about the tooth fairy, Thomas…?” she asked.

I didn’t know there was a penalty, of course. But Tabitha was rifling around her skirts, and eventually pulled out a mean-looking pair of pliers.

“What!” I yelped, and scrambled away with my back to the wall.

“Just kidding,” she laughed. “I don’t use pliers.”

“It’s the string-on-the-doorknob technique, of course.”

“No!” I clapped my hands over my mouth, and backed away. Tabitha drew a long thread from her skirt and advanced. The mouse advanced with her. Then, when they reached halfway across my bed, she levitated off the mouse and flew towards me. 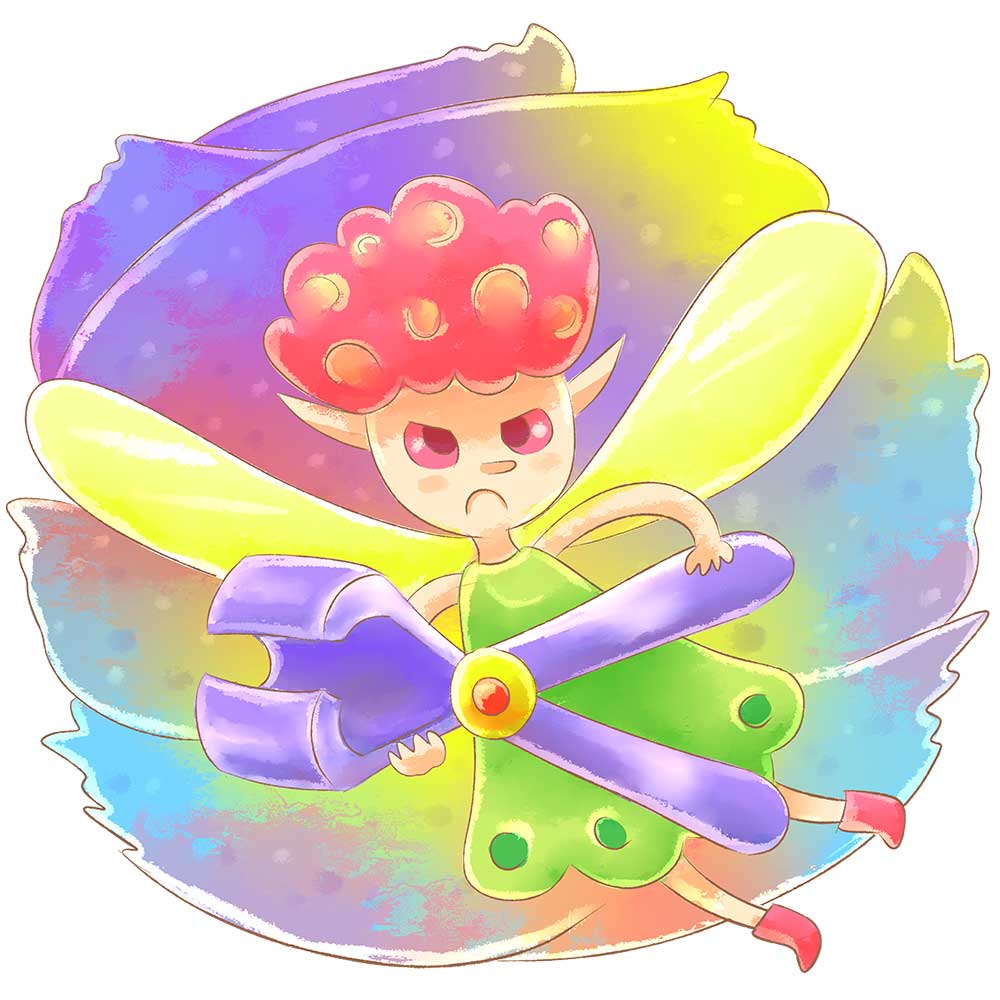 There she hovered, in front of my face, darting towards my mouth and away again like a wasp, as I started slapping her away as best I could. I couldn’t get her – she was too fast – but neither could she get inside my mouth.

To my horror, she even laughed as she tried to get me. She spun the thread around her head like a lasso. Her pink boots winked in the darkness. I wanted to call out for my Mum, but to do so would be to open my mouth, and let her in, and lose all my teeth in the process…

Still, I couldn’t help it. I was only eight years old. She was a fairy and I was just a human boy.

I took a deep breath to yell out… 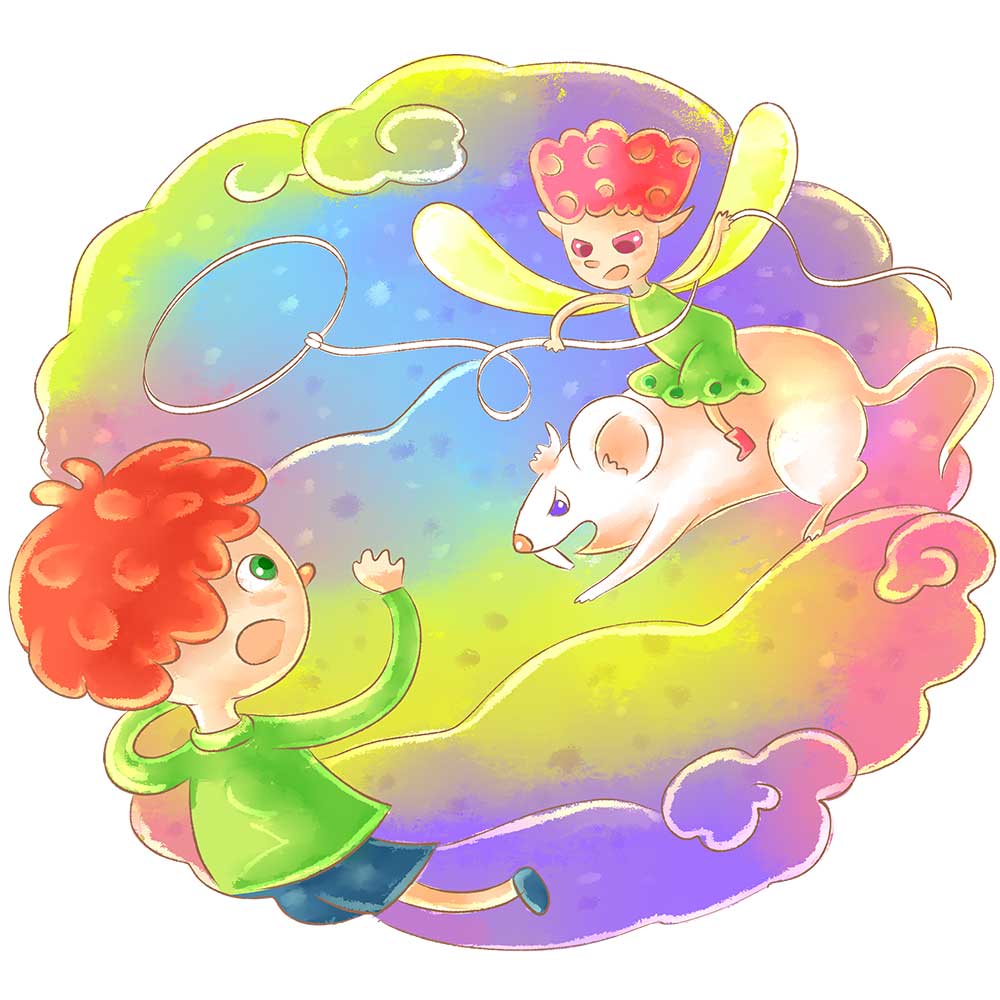 “Oh stop!” laughed Tabitha, and dropped back down onto her mouse. He made a harrumphing sound and they laughed together at me, two pairs of upturned eyes having the best laugh they’d had all week, probably.

“What?” I mumbled. I had stopped being scared, for some weird reason. All the scariness of them had disappeared with their laughter. Tabitha wiped her eyes and leaned in close.

“Oh Thomas,” she said. “I’m not going to take your teeth.” I just looked at her. ‘Just the one,” she clarified. “I need a cradle for my baby that’s on the way.” 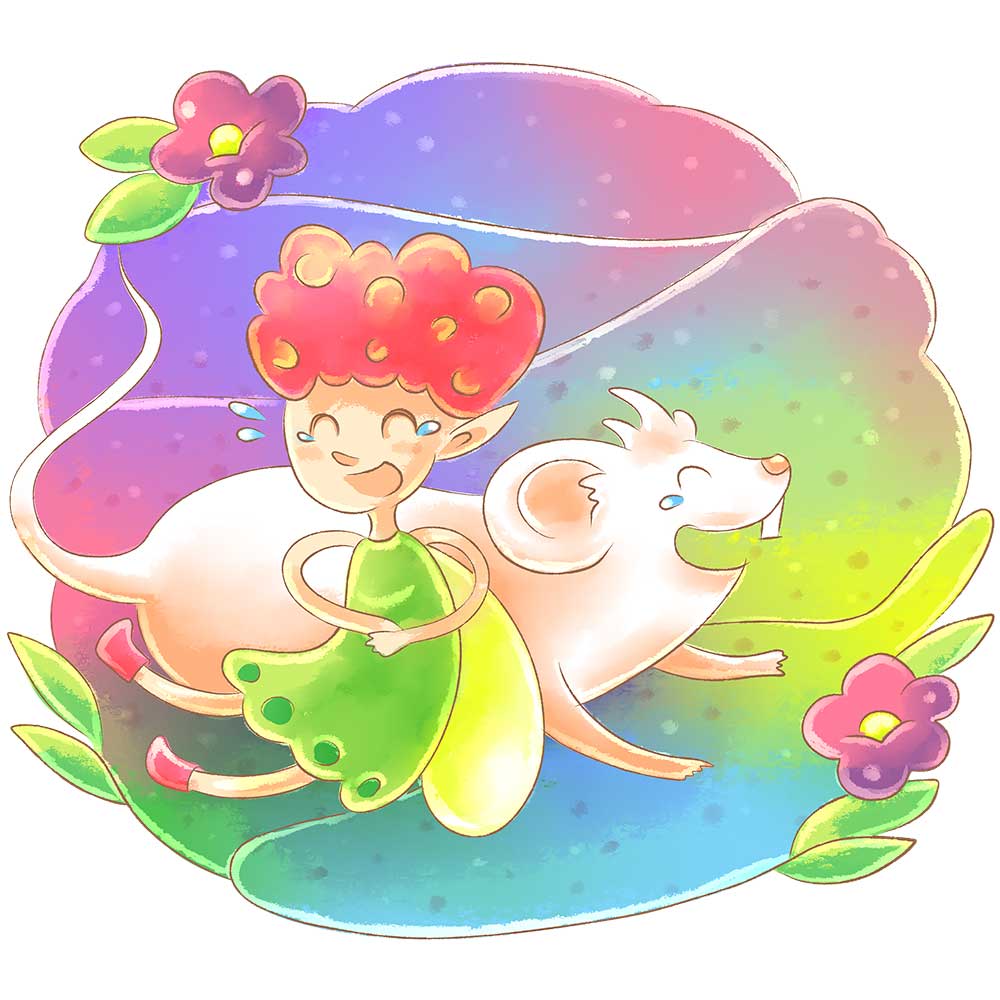 “It’s nearly done,” she said softly. “Three more nights in the moonlight and it’ll be a real live baby toothfairy of my own, to kiss and cuddle and play with… oh, I can’t wait. And I’m going to use your tooth as a cradle.” 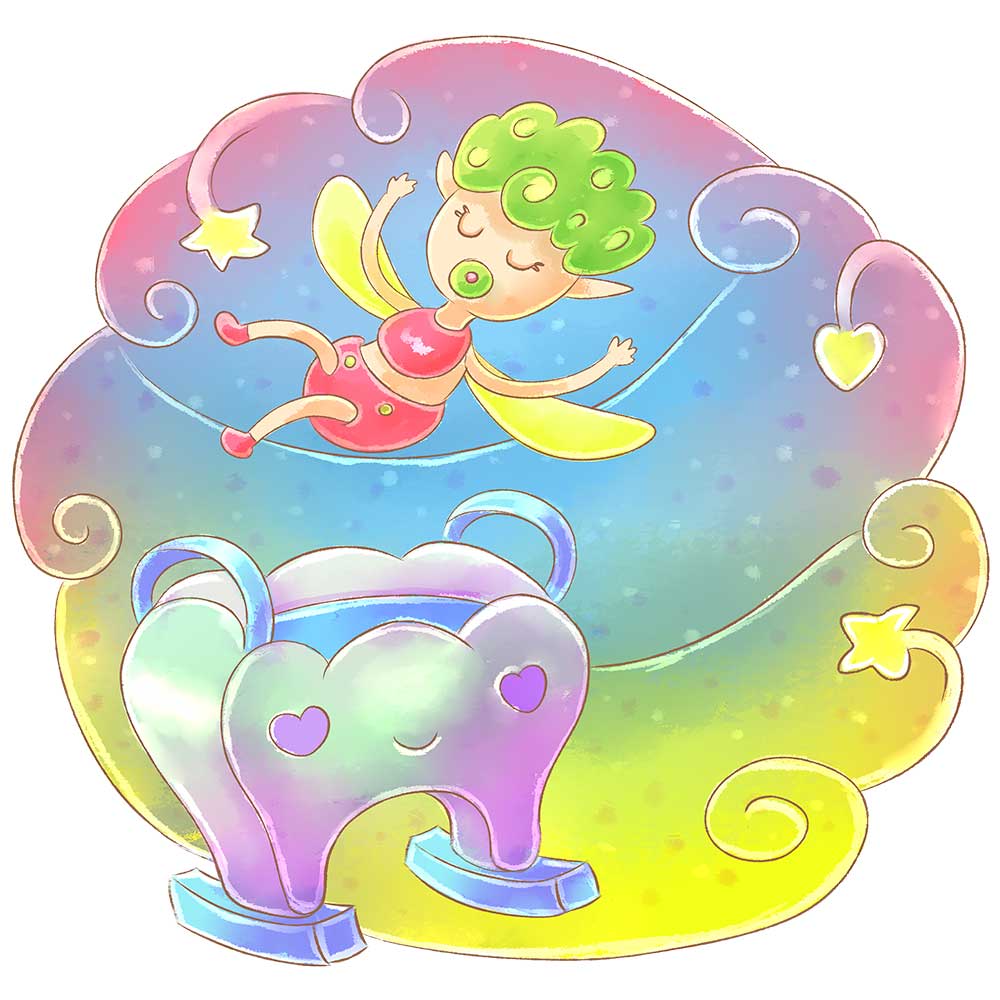 I believed her, this time. Tabitha looked as happy as could be. I took my hands away from my mouth and reached out for my missing tooth. Then I handed it to her, gently. Her wings made a gentle buzzing sound and lifted her up once again while she examined it in a moonbeam, this way and that, admiring it in the light.

She tucked it away in the pouch on the mouse, and handed over my $2. “Sorry about the little joke,” she said. “I just thought I’d kid you a bit. And your face!” 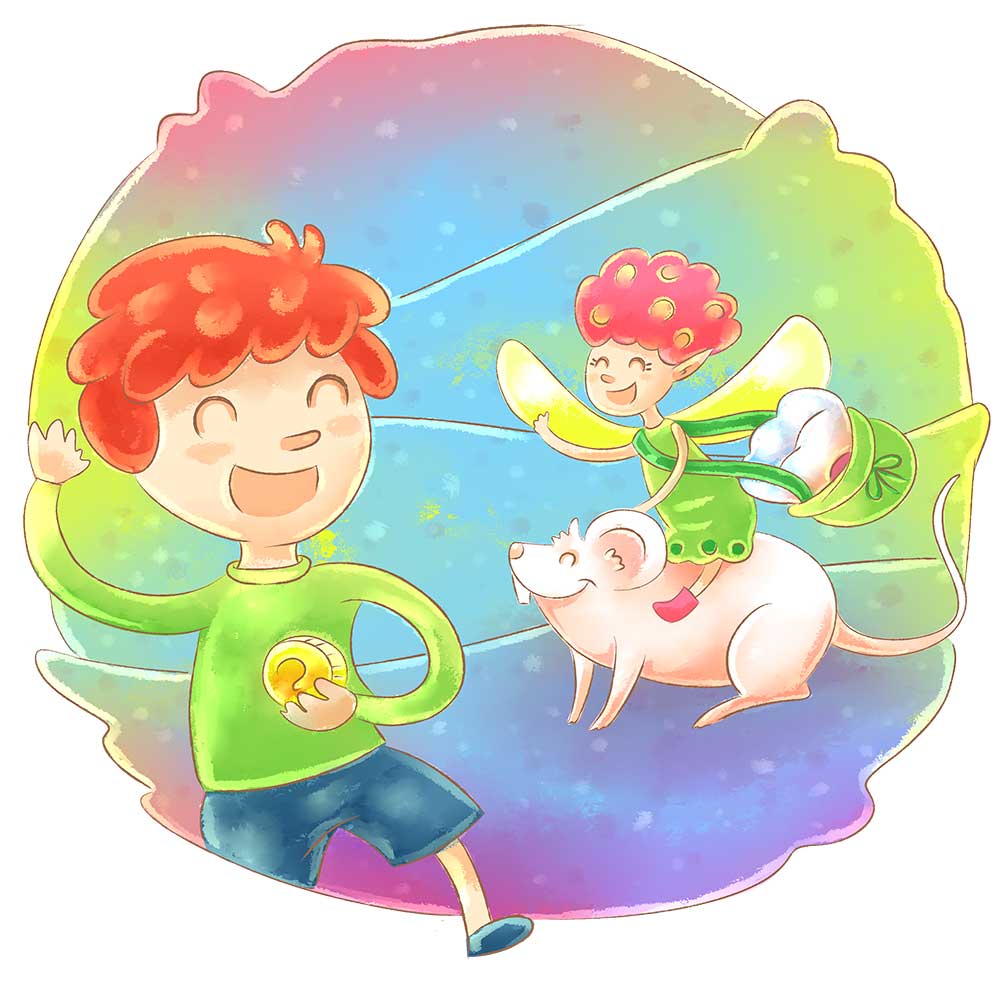 “Ha ha,” I mumbled. I was a bit embarrassed now. Who’s afraid of the toothfairy?

“And it is Halloween,” she added.

And so it was.

Now it’s been a few months since Tabitha last visited, and I bet she’s got her little baby sleeping in my tooth, just like she planned. I lost another tooth ages ago. But I haven’t told anyone – I’m saving it.

Saving it for the Big Payback.

1. In this story, Thomas isn’t all that certain that the tooth fairy is all that she’s supposed to be. How does he try to work out whether she’s good or crazy?

A note on the illustrations

The wonderful illustrations for this story were created by Nesma Soulflight. Nesma is a graphic designer, an illustration maniac & a cat addict. She has developed such a passion for illustrating children picture books over the years.

You can see her Portfolio by clicking here. 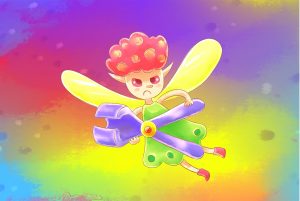 Thomas starts a correspondence with a creepy toothfairy called Tabitha.