Sophia stamped her foot as her mother brushed her red curls out of her face.

“My darling, you have to go. Now, your cousin has been kind enough to invite you to her tea party. It would be rude to not go.”

“But I don’t even like Samantha. She is snotty and a snob. She is a snotty snob!” Sophia huffed 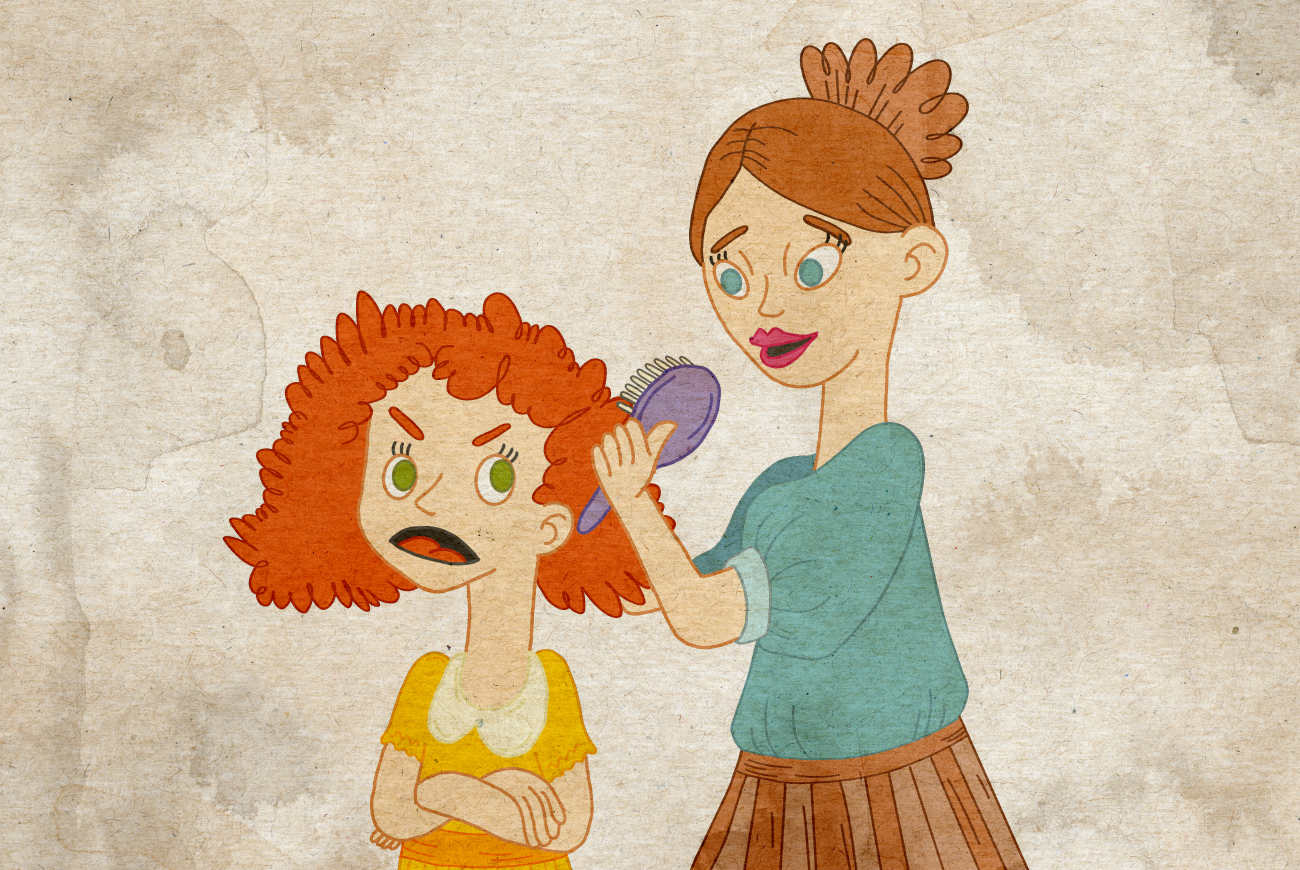 Her mother sighed and placed a large sun hat with a yellow bow on Sophia’s head. Sophia hated that hat almost as much as she hated that it went perfectly with her yellow sundress.

“I promise you will have a good time once you go. Now, you know the way to your cousin’s. Take the path through the woods. It is going to be a grand party. Your aunt has told me they have lined the path with blue ribbons to help guide the guests. You can take your bicycle. Follow the blue ribbons all the way there. Don’t go off the path and don’t lose your invitation,” she said firmly, pressing the golden envelope into her hand. 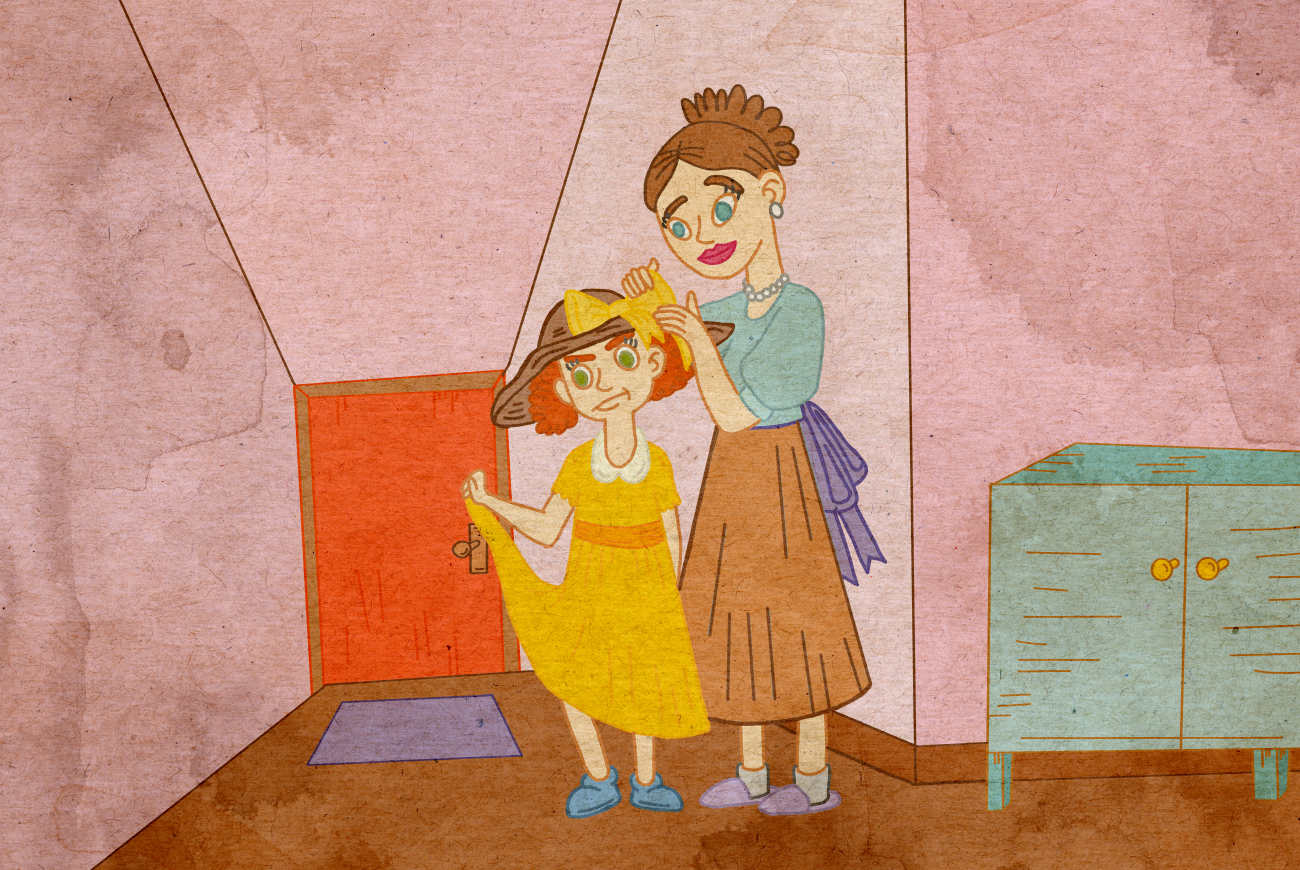 Sophia kissed her mother goodbye and retrieved her bicycle from the shed. Her bicycle was her prized possession. It was cherry red with a white wicker basket on the front. She began to push her bike towards the forest. Her orange tabby cat Peaches crawled out from behind the shed and began to follow her into the woods.

“No, Peaches. You can’t come with me,” she said, shooing her away.

“Well alright, maybe with you there, the party won’t be so bad.”

She scooped the cat up, placed her in the basket, and rode into the woods. 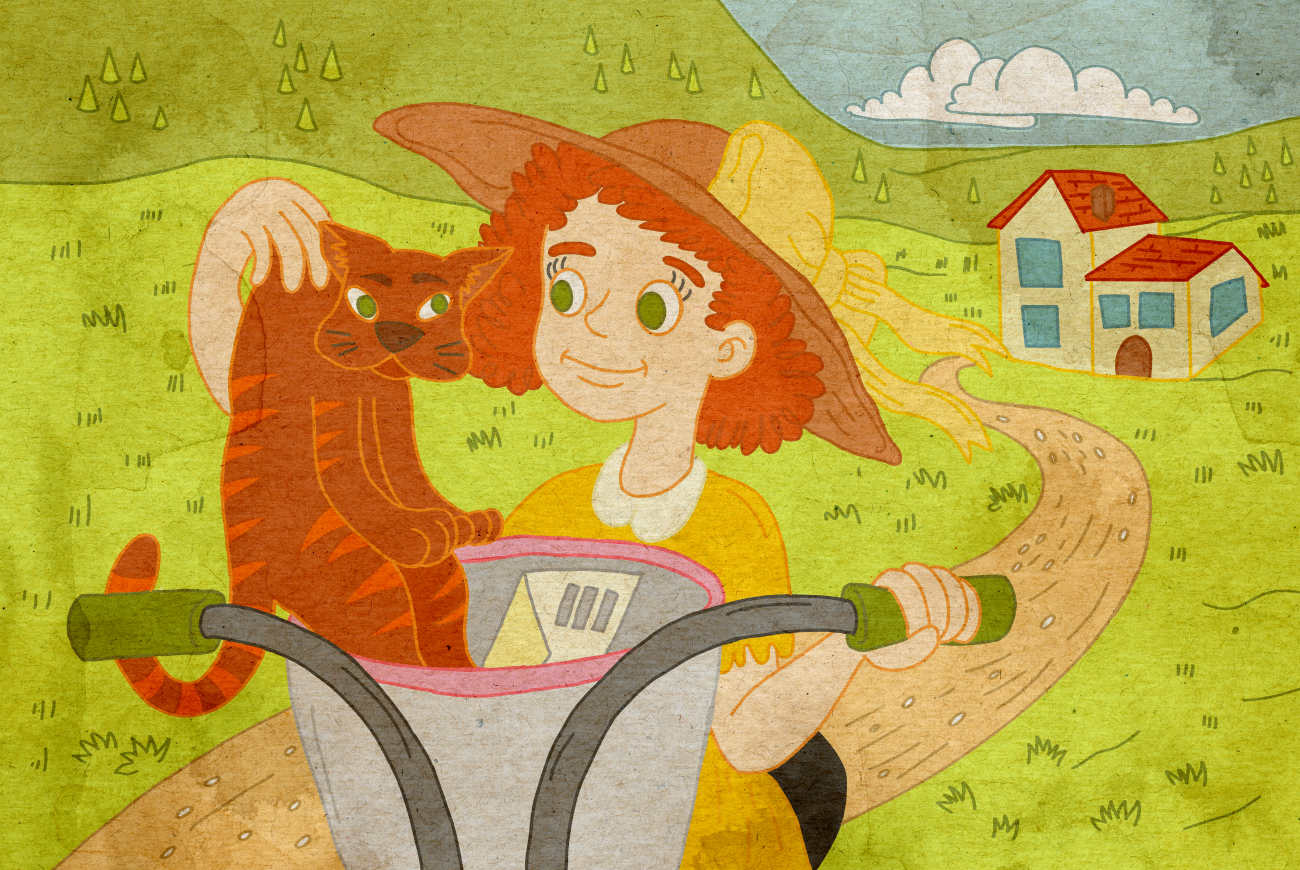 Sophia had always liked the forest. It was big, open and free. The trees were so tall she thought perhaps she could climb them to the clouds.

It wasn’t long before she saw the blue ribbons tied in bows that would lead her to the tea party. She followed them deeper into the forest. She groaned… she wanted nothing more than to run away and skip the stupid party.

Something bright caught her eye. She turned her head. There in front of her, the path split. There was now a fork in the road. A small path led off to the denser part of the woods. Curiouser still, this path was lined with red ribbons.

“How odd! Peaches, look! There is a new path in the woods. I’ve been here many times and I have never seen this second path. Surely, I must follow it, if only just to see where it will take me. After all, when one is given a chance to be surprised, one must take it.” 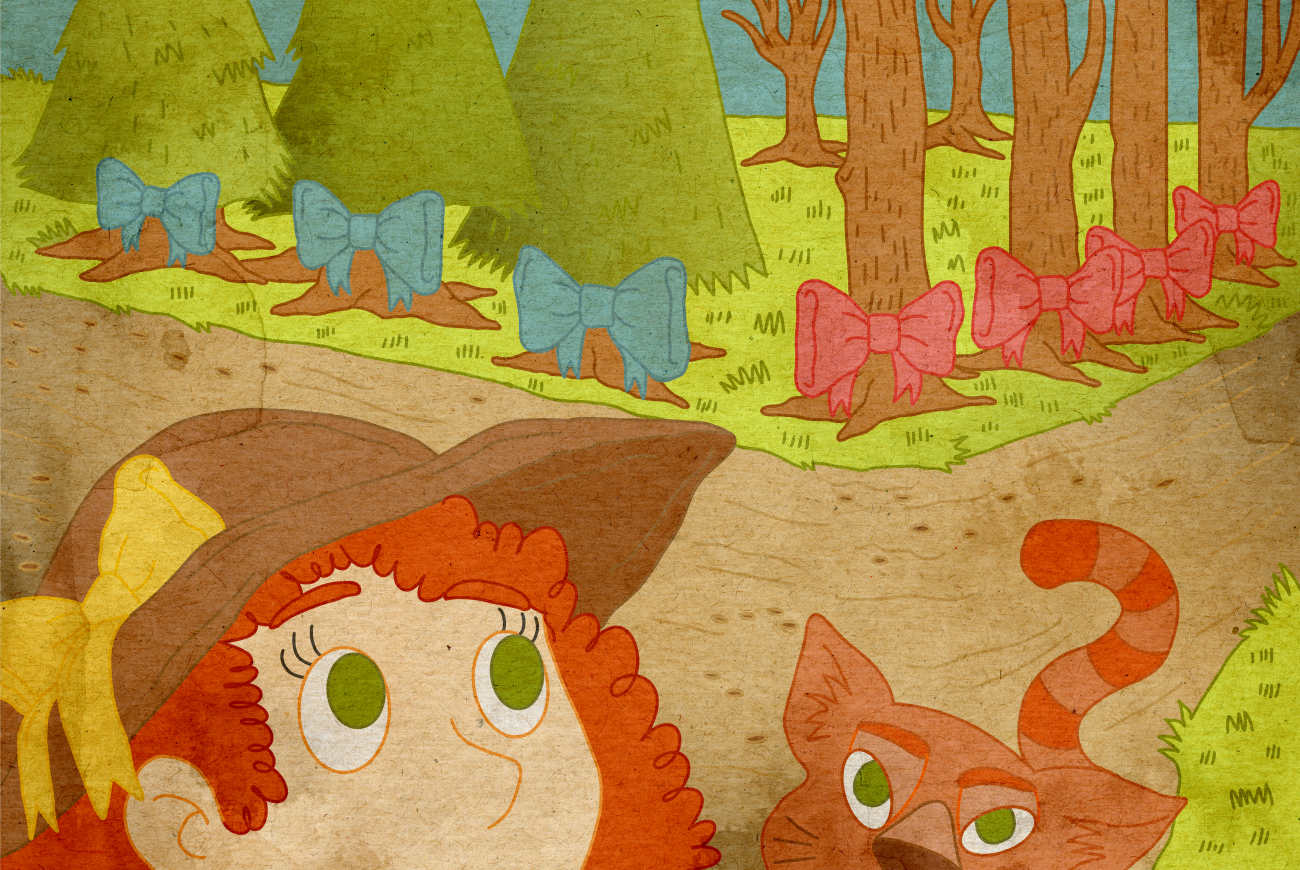 Peaches meowed in agreement. They diverted down the second path, following the red ribbons. As they traveled down the new path, the trees began to look different. They changed from the familiar pine trees to a tall and twisted kind of tree that Sophia had never seen before. The sky also seemed to change from a pale blue to violet. Sophia shivered, for it had suddenly grown colder. Chunky snowflakes began to fall from the purple sky.

“I am suddenly not dressed properly. How strange for it to be snowing in June!” 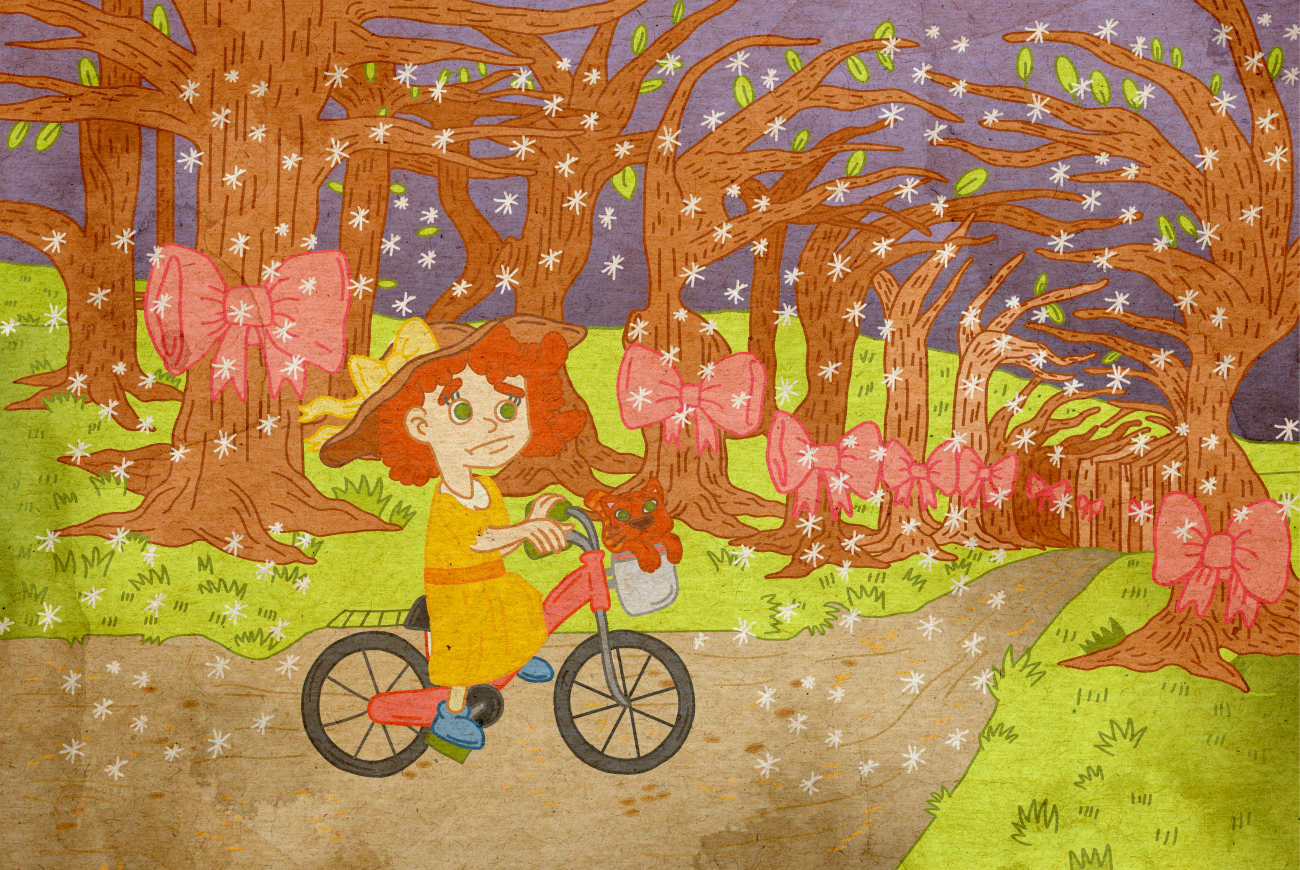 The path lined with red ribbons stopped abruptly. At the end of the path was the largest tree Sophia had ever seen. It was larger than a house. She rubbed her eyes: actually, it seemed this tree was a house! A bright red door with a golden knob was placed on the outside. The door was just the right size for Sophia. The knob turned and the door appeared to open all by itself. Her cat began to meow wildly and sprang out from the basket. 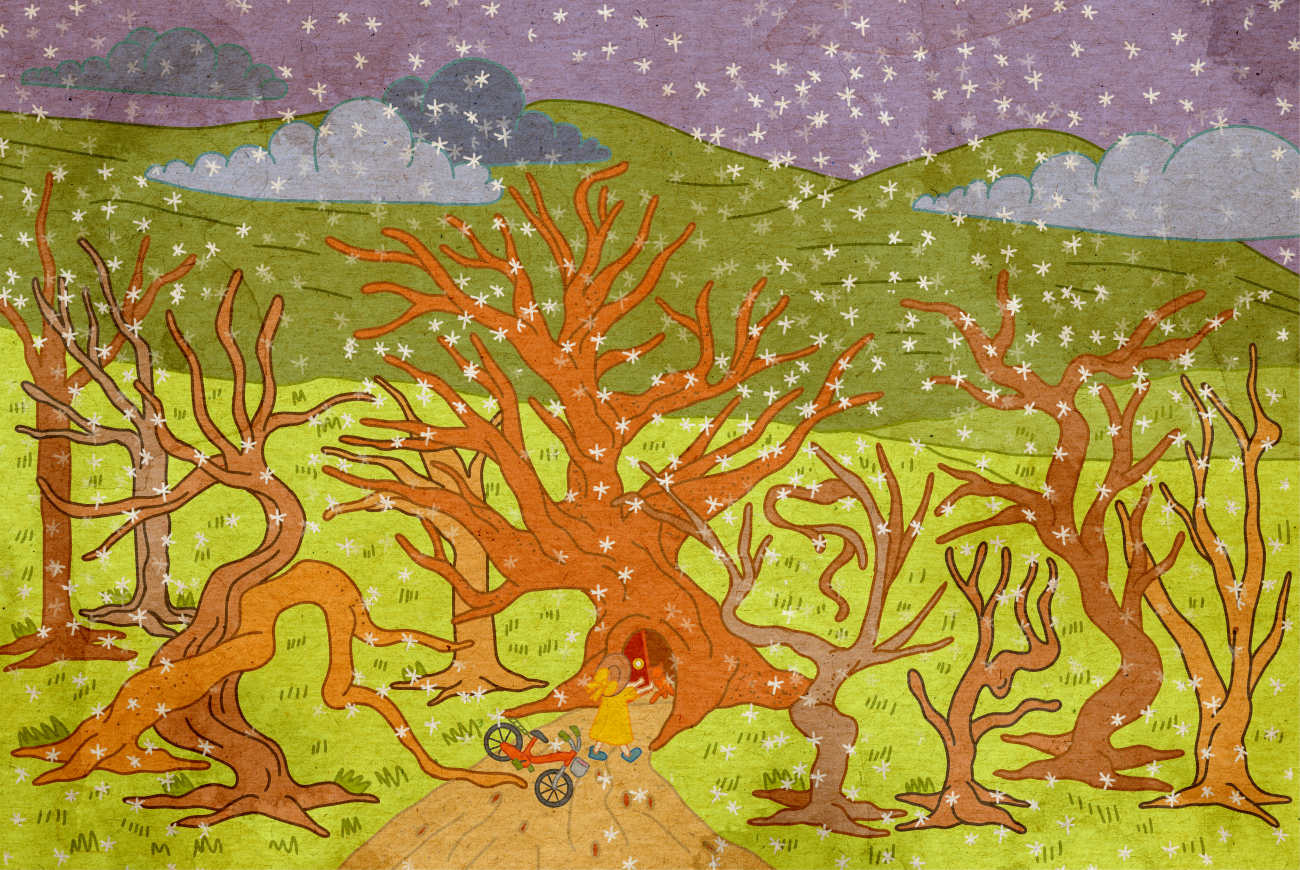 “Peaches, come back!” Sophia cried, throwing her bicycle to the ground. But the cat had already disappeared behind the door.

Sophia peered inside. It seemed that the tree was not a house, after all. The open door revealed an underground tunnel that went farther than Sophia could see. A stick ladder lay against one side of the tunnel. She leaned in. She could hear cheerful music coming from deep inside the tunnel. A scrumptious smell tickled her nose.

“Well, I can’t go to cousin Samantha’s without Peaches. I must go after her.” 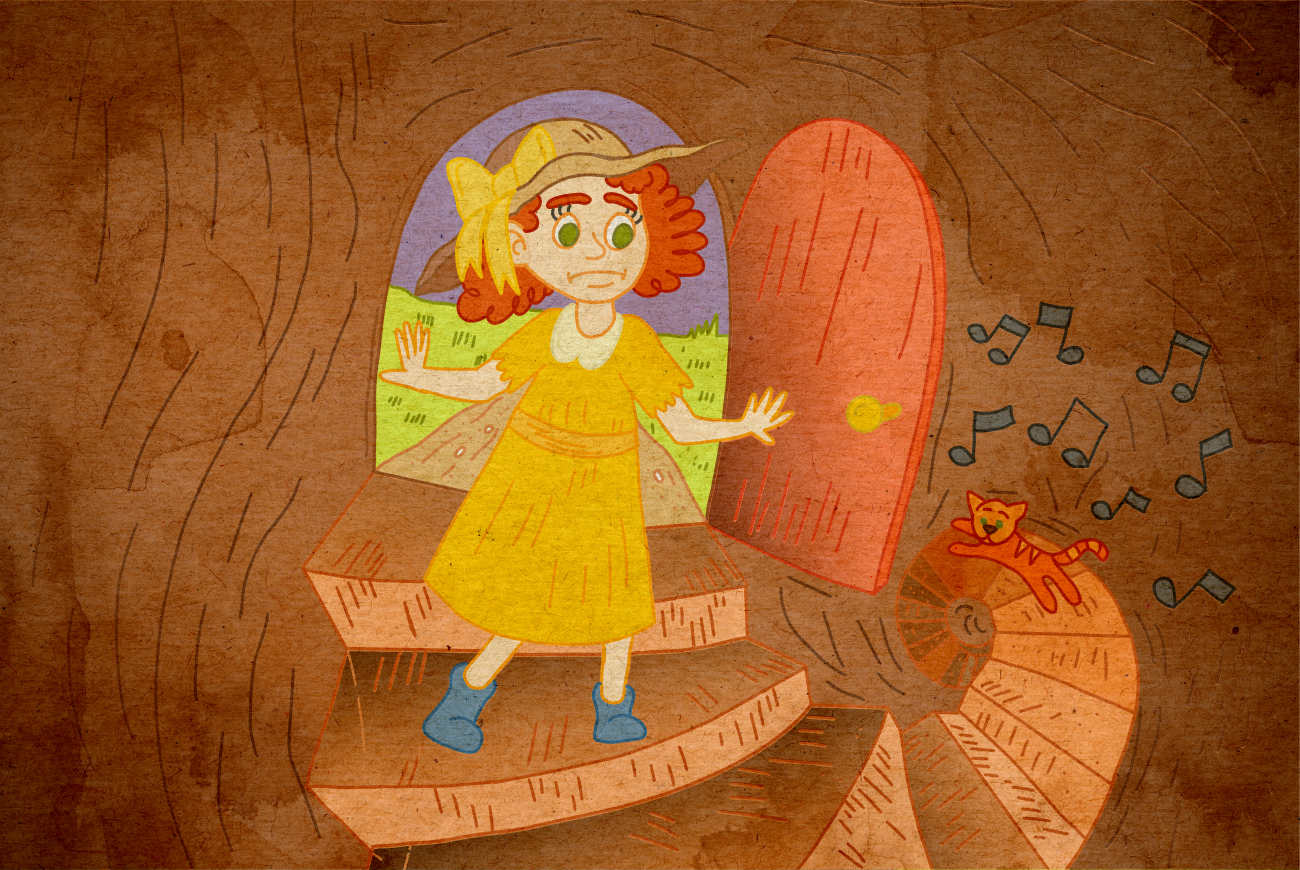 She gathered all the courage she could muster, which (she felt) didn’t amount to much more than a bread crumb. But a crumb of courage is more powerful than a fistful of fear.

She climbed down the ladder and followed the music. She felt as though she had been descending for quite some time, perhaps hours, she thought. Finally, her feet felt the firmness of a dirt floor. There were forest creatures dancing and playing instruments around a roaring bonfire. There were chairs and tables piled high with plates of rich food. It seemed like the animals were having a secret party of their own underground. There were bears, badgers, foxes, wolves, rabbits and even birds, all finely dressed and walking upright. 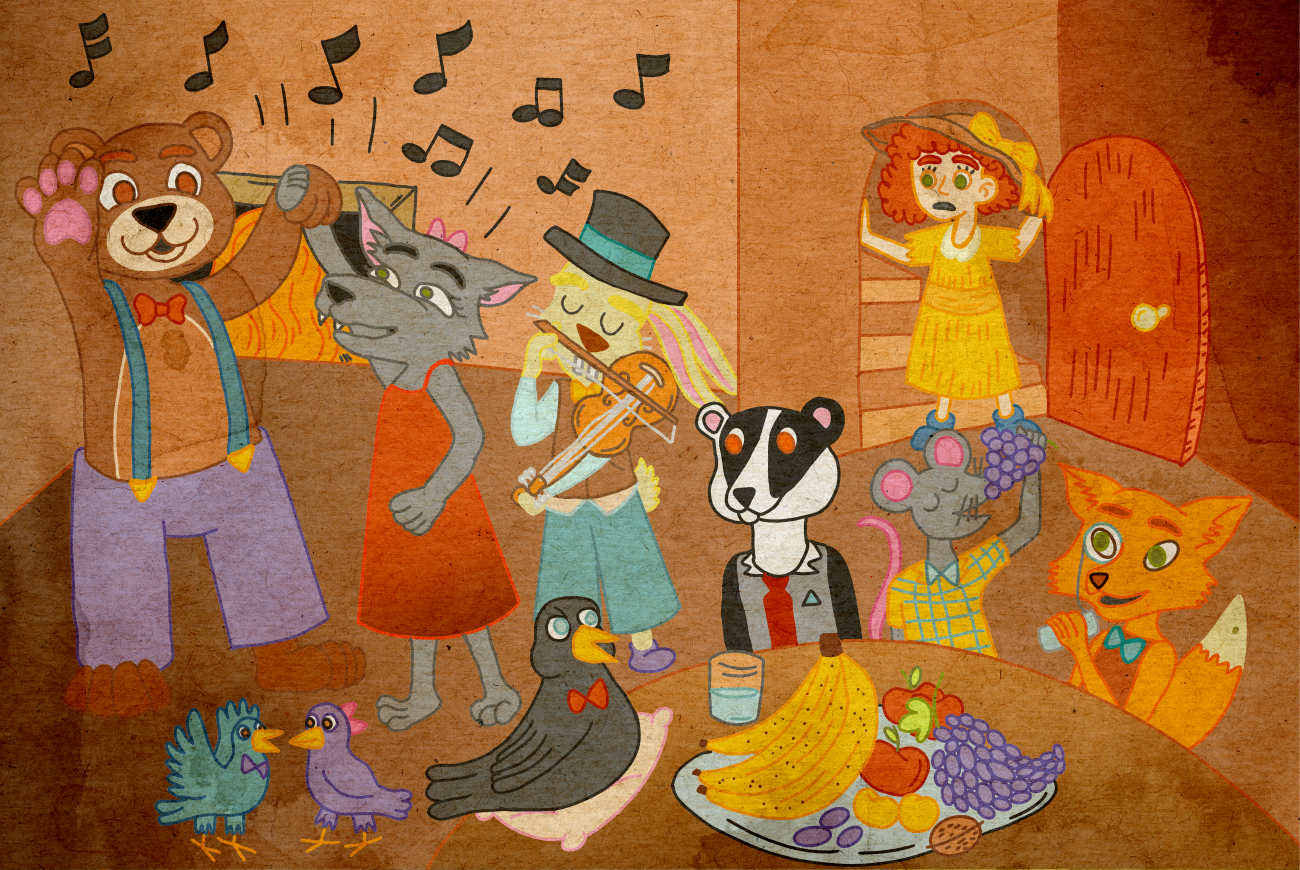 Suddenly the music stopped. The creatures all turned to look at her.

“What is this human girl doing here?” demanded a rabbit who was dressed in trousers and holding a fiddle.

“I-I’m Sophia and I was just looking for my cat,” she stammered.

“Oh, you mean Mrs. Peaches. She is over there talking with Badger,” explained a bear, wearing a shimmering evening gown.
Sophia gasped at the sight of her cat speaking to a badger while walking upright on her hind legs.

“Oh, now I know I must be dreaming,” Sophia said as she rubbed her eyes. 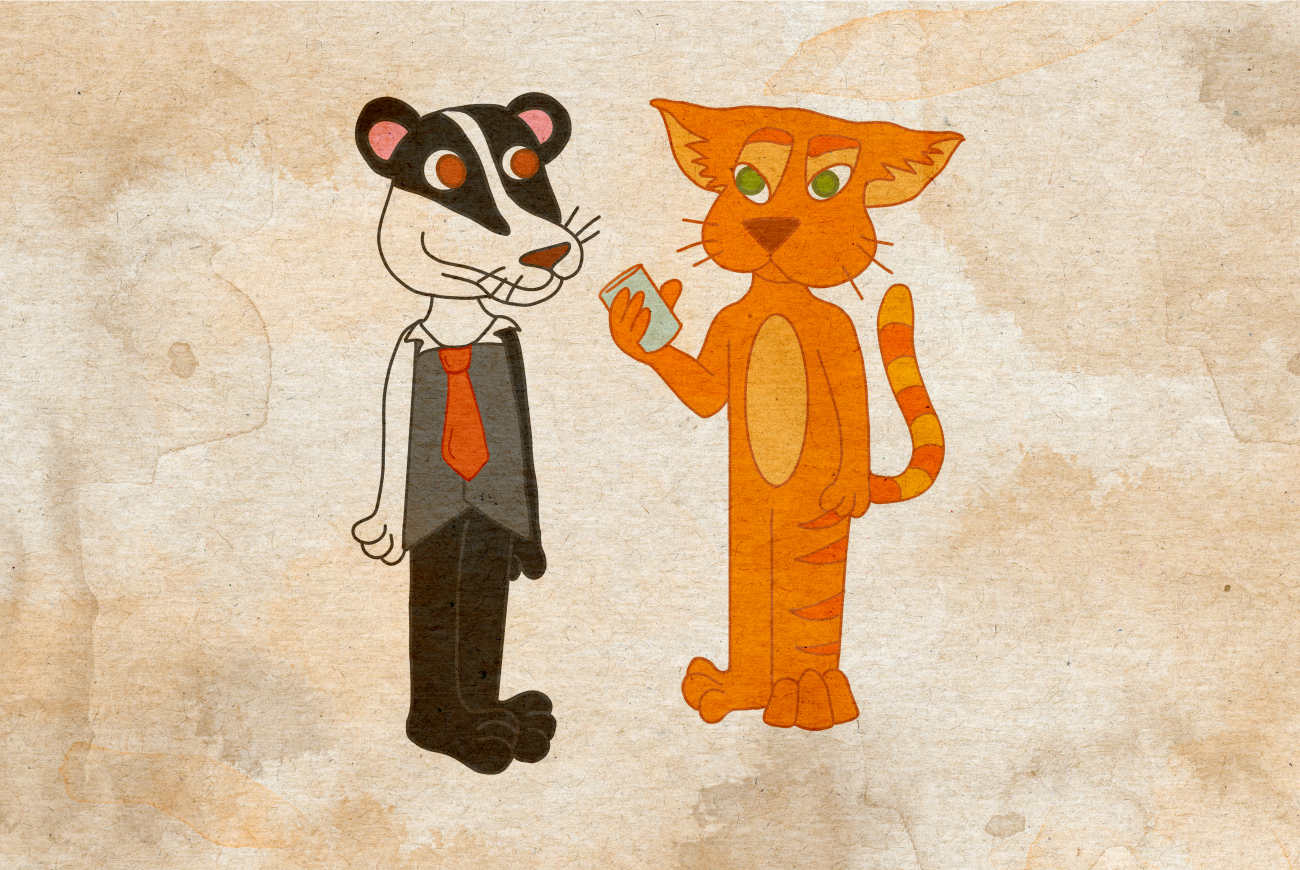 “My dear, I am afraid this is a private party. Do you and your guest have an invitation?” asked a grey fox wearing a top hat and a tweed jacket. Large round glasses hung low on his snout.

“I-I um.” Sophia stuttered. She was cold and hungry and she did not want to leave without her cat. She fumbled around in her pocket and pulled out her cousin’s tea party invitation. She held it out to the fox. 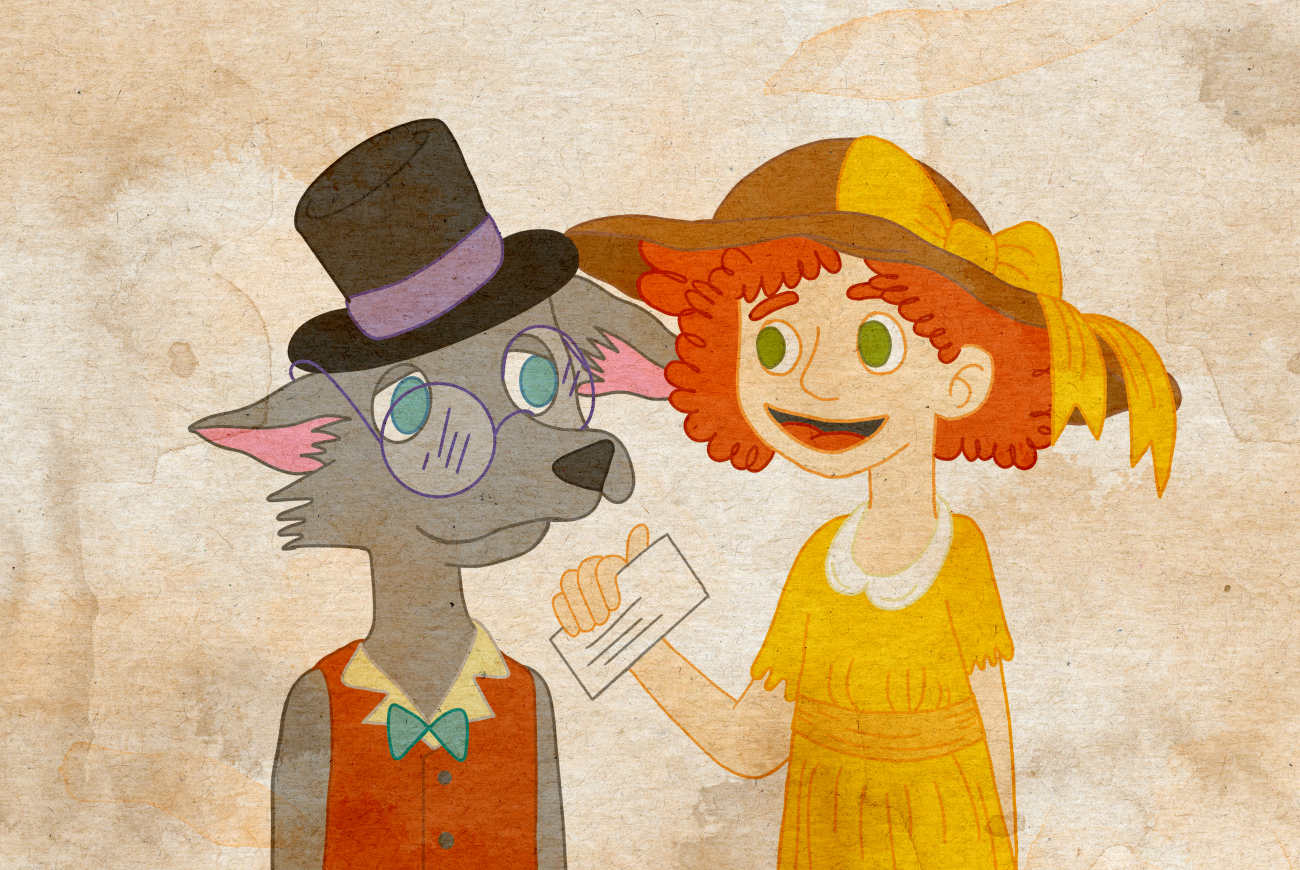 The animals muttered and shook their heads. Sophia then got a clever idea.

“Oh yes! You see, it says here you are cordially invited to the party and – um – you may bring one guest with you. My guest is Peaches the cat over there,” she said, beaming at her own quick wit.

The old fox eyed the invitation and Sophia suspiciously.

“Well! Alright then! Let’s continue the party and please find something proper for Mrs. Peaches to wear. It is indecent for a feline of good upbringing to parade around in only their fur coats!” declared the old fox. 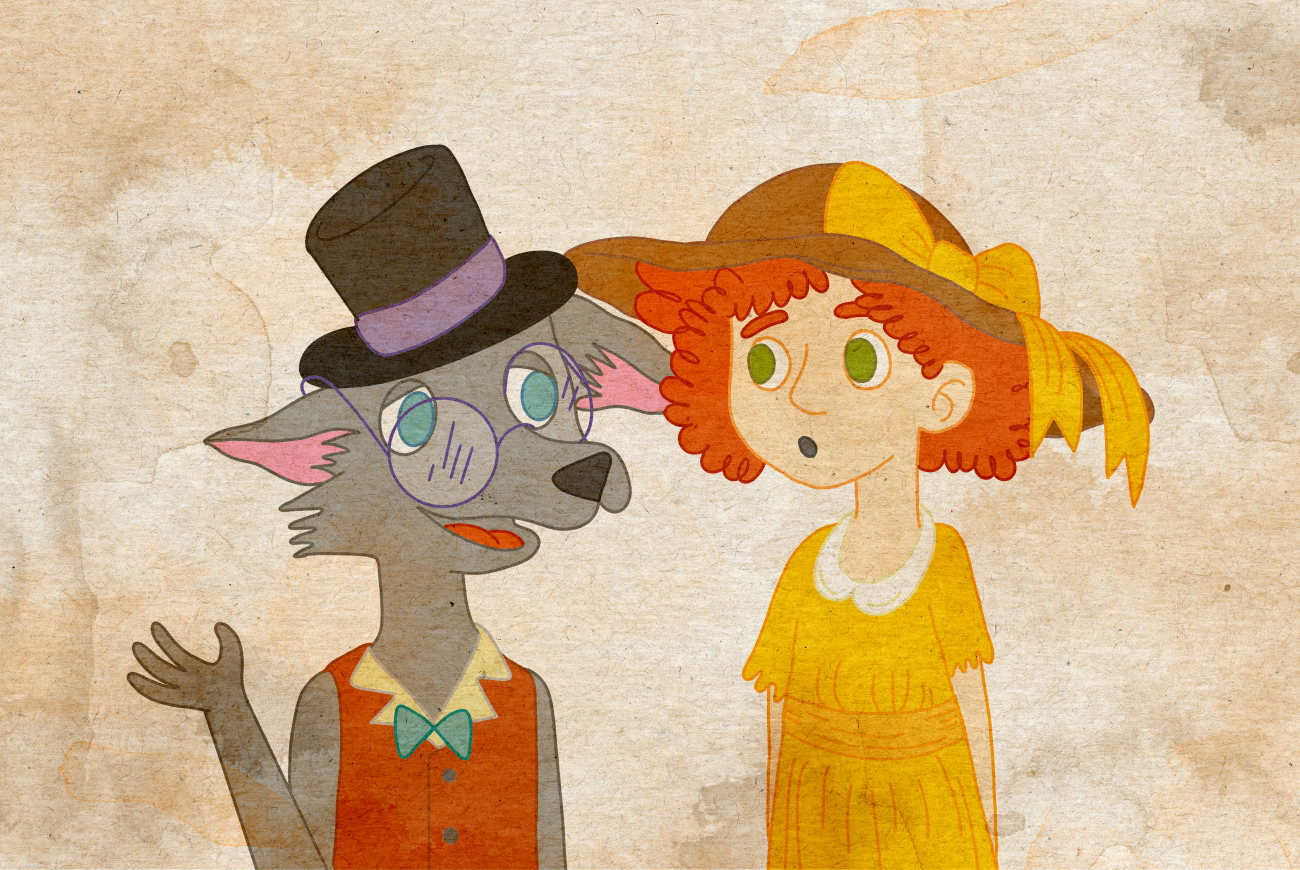 Sophia placed her hat on Peaches’s head and tied a ribbon from her hair around the cat’s neck.

The two sat side by side at a table.

“That was quick thinking! I just wanted to come for the food. I don’t actually know anyone here.” said Peaches.

Sophia did not think she would ever get used to hearing her cat speak.

The two ate hoards of delicious food. There were cakes, scones, fish, and berries. They even drank tea with milk and honey from dainty little cups.

The music started up again, and Sophia danced the night away alongside the woodland creatures. She waltzed with the fox and tangoed with the bear. She even learned a new dance from the rabbit who wore trousers. It was not until the night was nearly over that Sophia thought of the time. 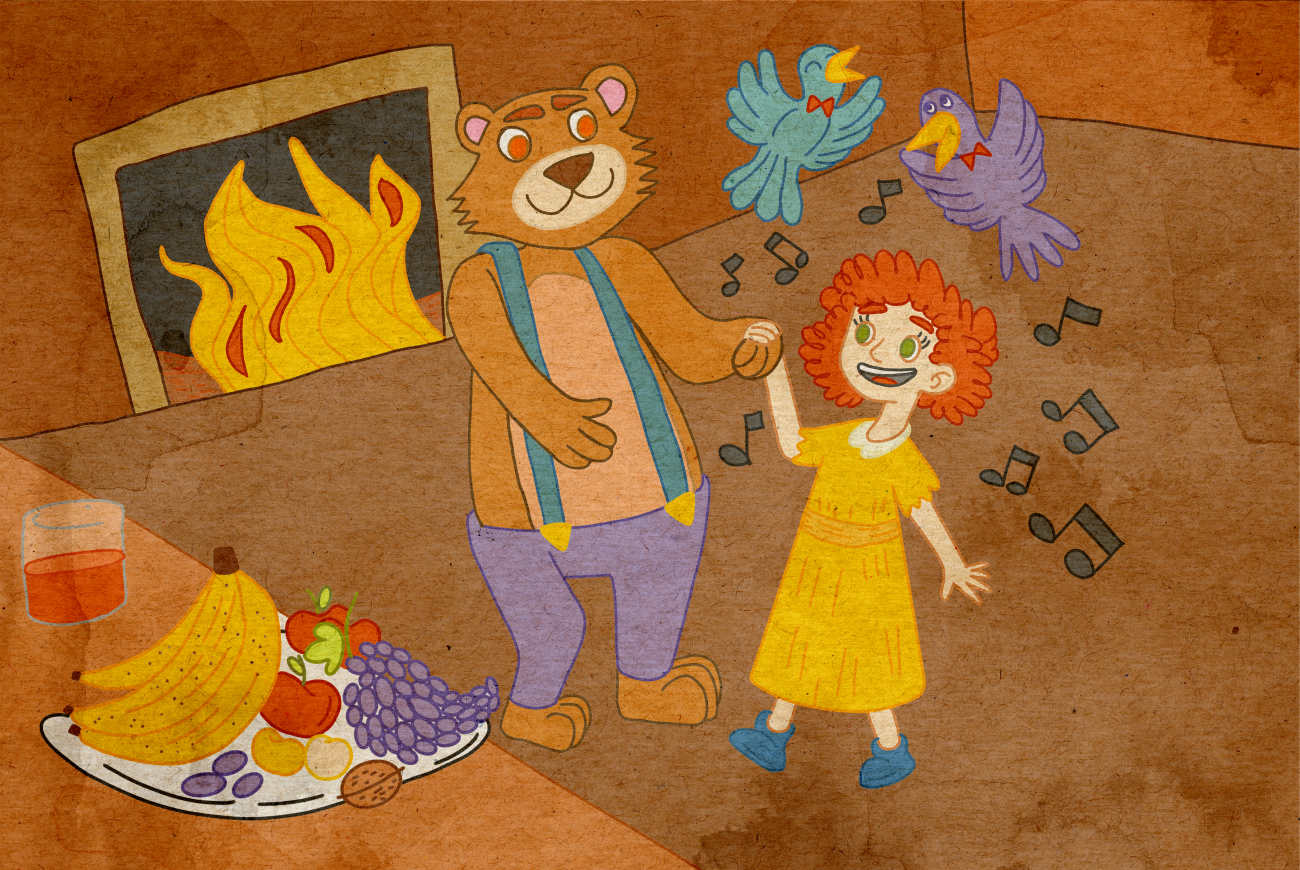 “Oh no. I forgot the time. I really must be going. Thank you all for your kindness. This was the most splendid party I’ve ever been to!”

Each animal gave her a great big hug.

“There is still something I don’t quite understand,” said Sophia to the grey fox. “There was no other path all the other times I have entered the wood. Yet, this time there was?”

“Perhaps Sophia, the other times you weren’t looking for it,” said the grey fox with a wink. 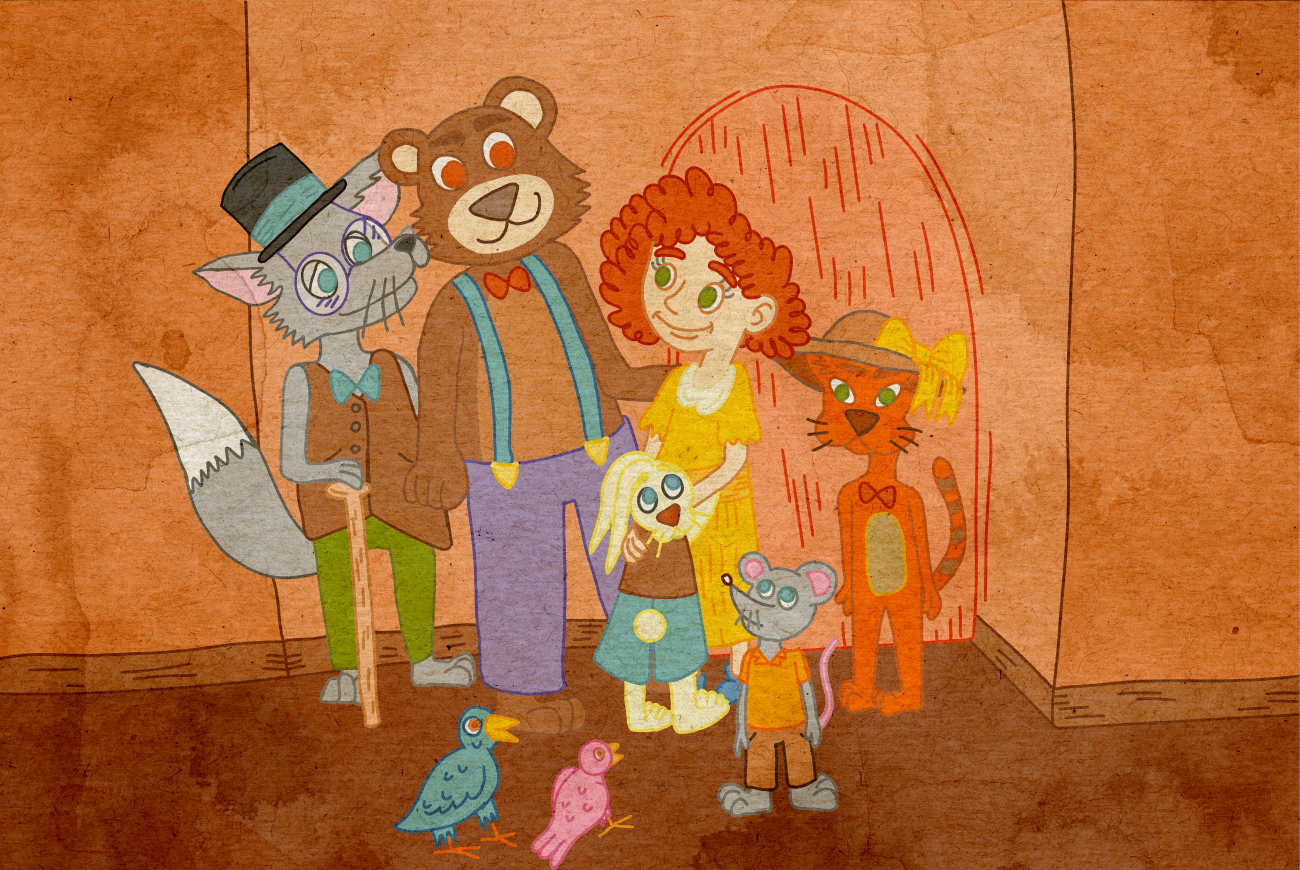 “We were most delighted to have met you, Sophia. I do hope you come again to our next party. Someday you must come back teach us how to read human,” said one of the rabbits.

Sophia and her cat Peaches began the long climb back up the ladder. They climbed out of the tunnel and stepped through the door back into the forest. 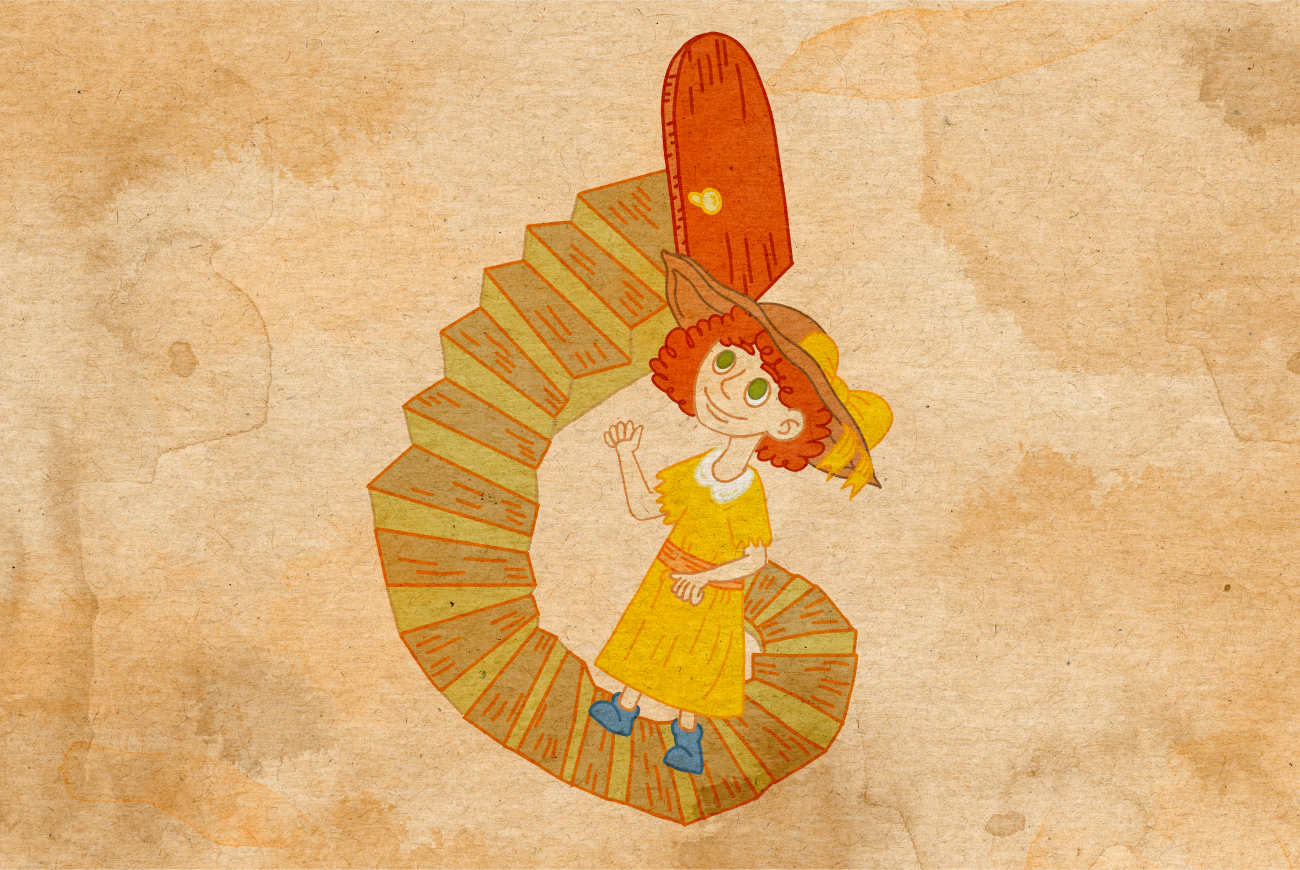 “Wasn’t that a marvellous party, Peaches?” Sophia turned to find that Peaches was no longer walking on two legs. She was back on all fours now. She meowed and licked her paw carelessly. The hat and ribbon had been discarded. Sophia picked them up and placed the garments and the cat in the wicker basket of her bike and began to follow the path back home.

Soon the forest started looking as usual as ever, and the sun was again high in the sky, as if no time had passed at all. She could now see her house and the end of the forest.

“What a wonderfully peculiar day,” she thought. 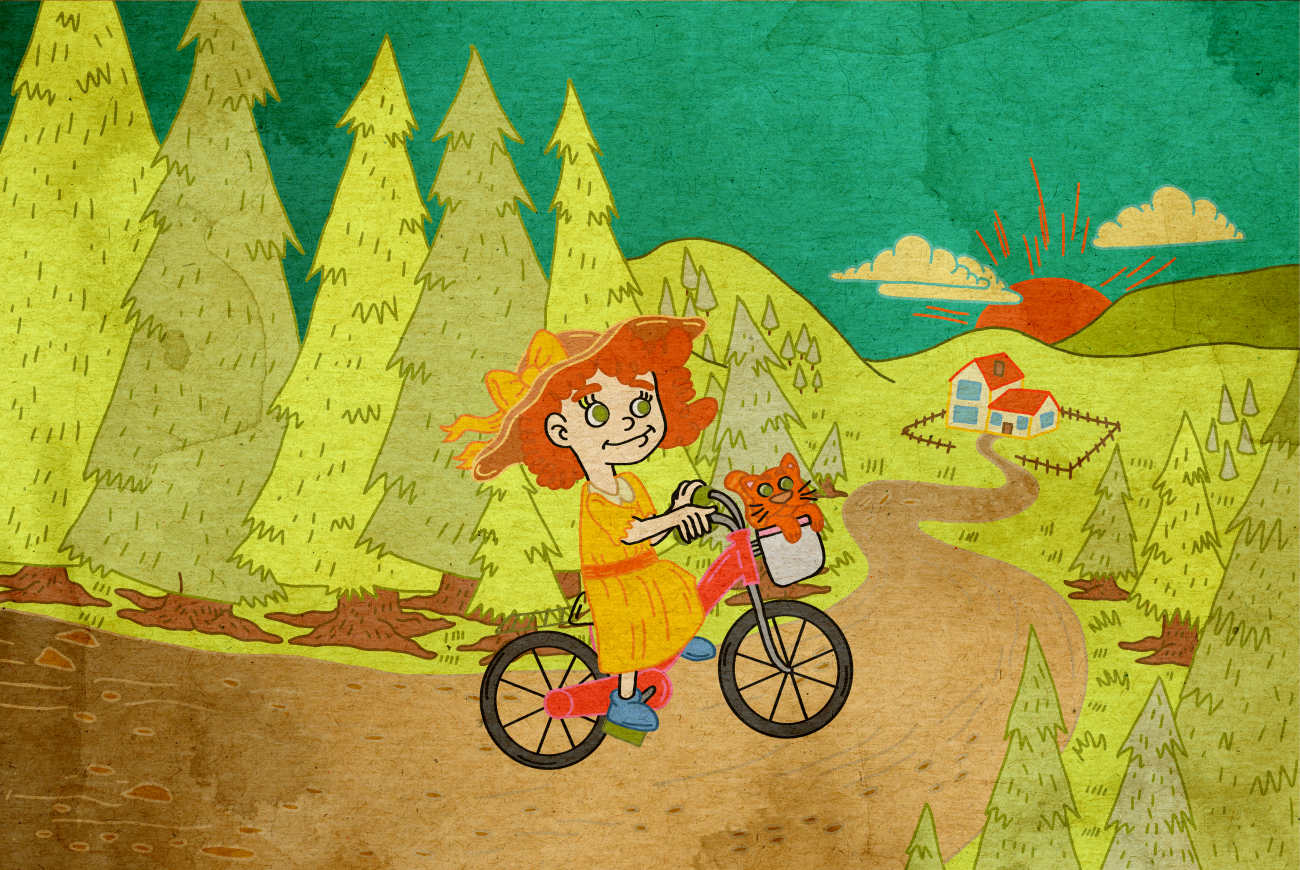 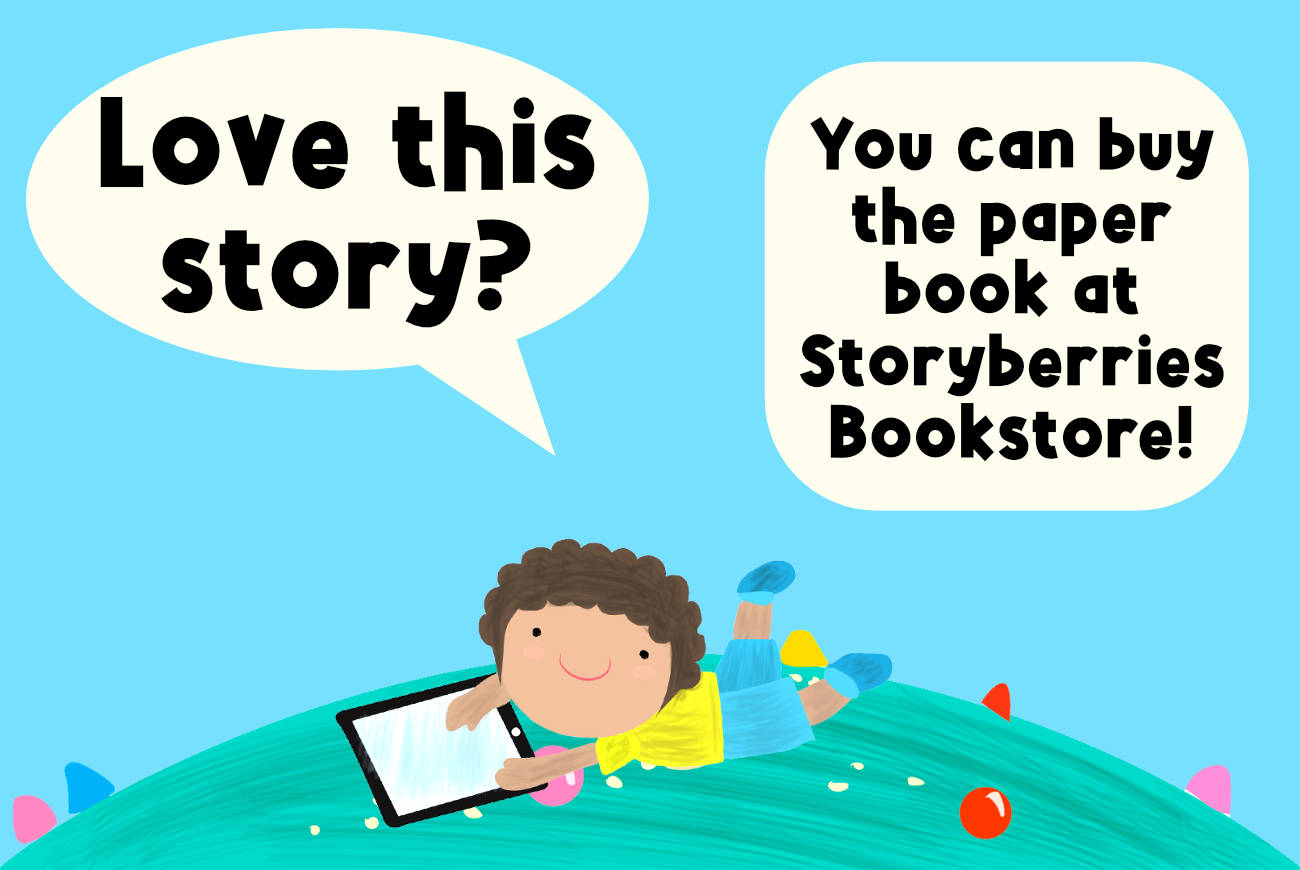 1. What is the strangest thing you can imagine finding on a forest walk?

1. Would you have done the same as Sophia, and pretended to have an invitation to a party such as this one? Why or why not?

2. Do you think there is any difference between a lie and what is called a “white-lie”? Why or why not?

Music and sound effects for the video from zapsplat.com

The Cat Who Could Eat So Much