Zoey is in a wheelchair – “My legs don’t work…” she tells people who ask.

And Zoey can do many things just like all children, but not everything.

Zoey goes to school and plays most of the games, but not all of them.

Zoey goes to the playground and that is the problem. She plays in the sand, she plays catch the ball and then she watches her friends on the swings, slides and roundabouts.

“Why aren’t there any rides for Wheelie Kids? I wish, I wish…” Zoey tells her mother.

“What rides do you wish, Zoey?” the lady sitting with her mother by the sand asks.

“But there are wheelchair roundabouts, you know,” the lady tells Zoey and her mother.

“But not in our park.” Zoey looks around… 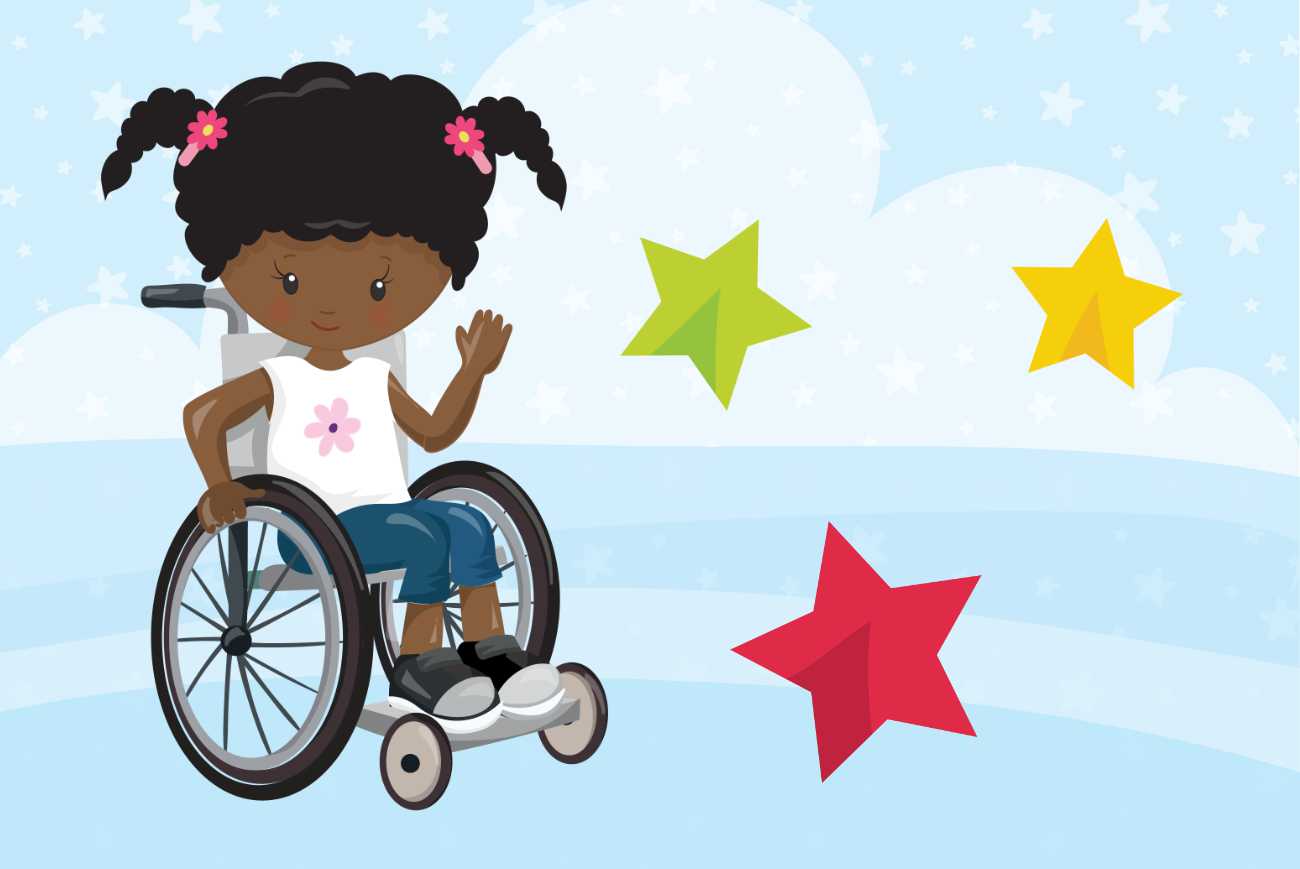 Zoey’s mother and the lady start to talk.

“Grown up stuff, boring.” Zoey shakes her head and she finishes off her Sand City, which starts her thinking swings and roundabouts again, until Daisy joins her and the ‘Sand City’ gets bigger and better.

On the way home Zoey’s Mom talks about the lady in the park “Nina, that’s her name, thinks a wheelchair roundabout would be a great thing for all the children. We’re going to get one…”

Zoey turned her head and laughed. “Are we?”

The Park Man said “Yes, but it costs lots…”

A sign went up. Zoey painted it with her friend Daisy.

Help Zoey get her Wheelchair Roundabout!
We need helpers and money…. 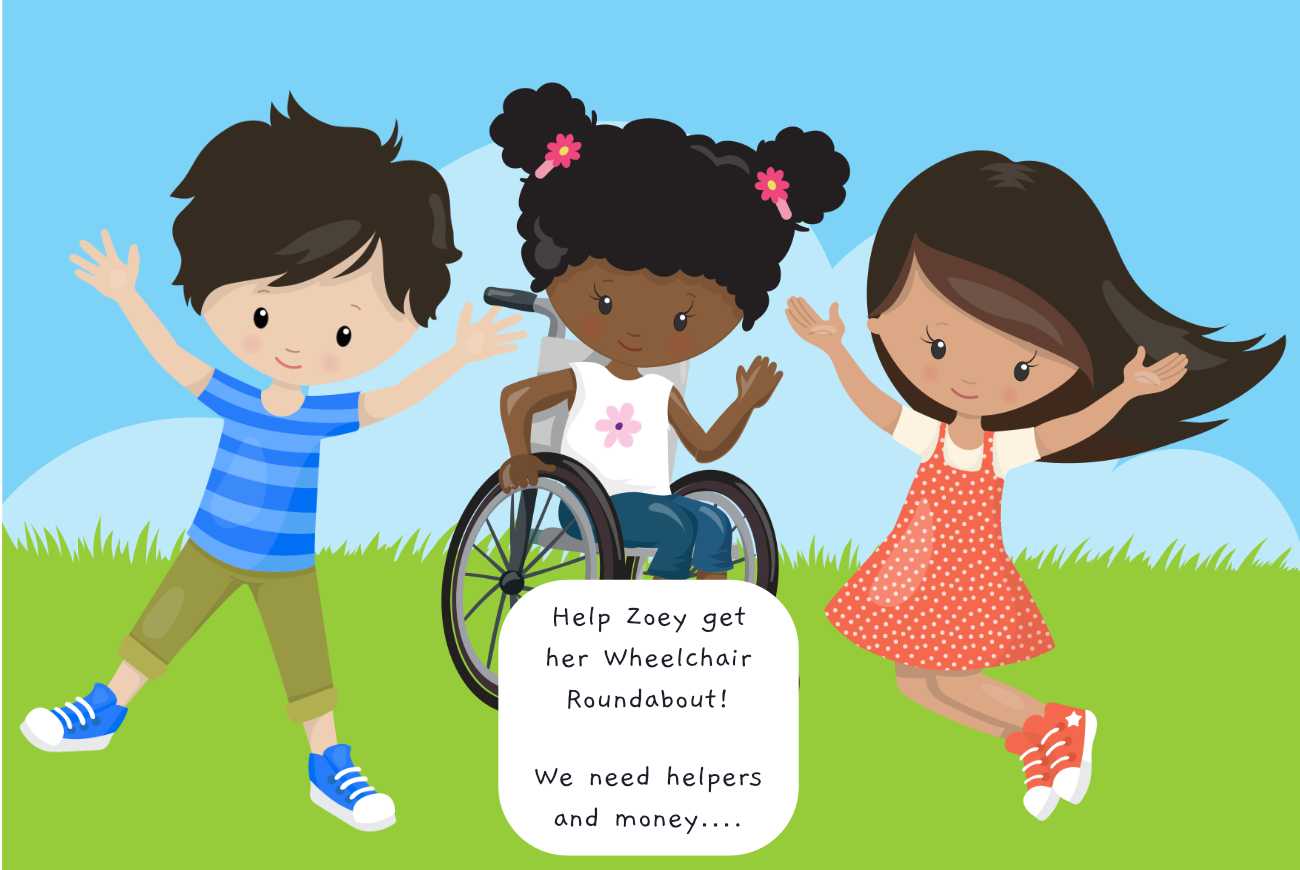 Daisy’s Dad found a Wheelchair Roundabout, not new but good, for sale.

The Lady in the park started collecting money for the roundabout…

“Oh.” said the Park Man. “I can’t say no now, can I? If you collect half of the money and everybody helps to set it up, then Zoey can have her wheelchair roundabout…”

In the next weeks there were Roundabout Parties in the park – cookies and juice for Zoey’s Roundabout. And most people joined in and even gave a little extra….

Daisy’s Dad agreed a price for the wheelchair roundabout and another Dad with a pick-up truck went to collect it.

A Wheelchair Roundabout needs a big hole to put it in ….so a wheelchair can roll on and roll off easily. So, there was a ‘dig a big round hole party’ and the Park Man couldn’t stop laughing.

“Zoey, do you know what you’ve started with your idea? I can hardly believe it myself.”

Cookies and juice- but this time free. Bright balloons on the roundabout and Zoey’s wheelchair. A man from the TV came with a camera and the park was full of children to help Zoey test her whizzing roundabout. 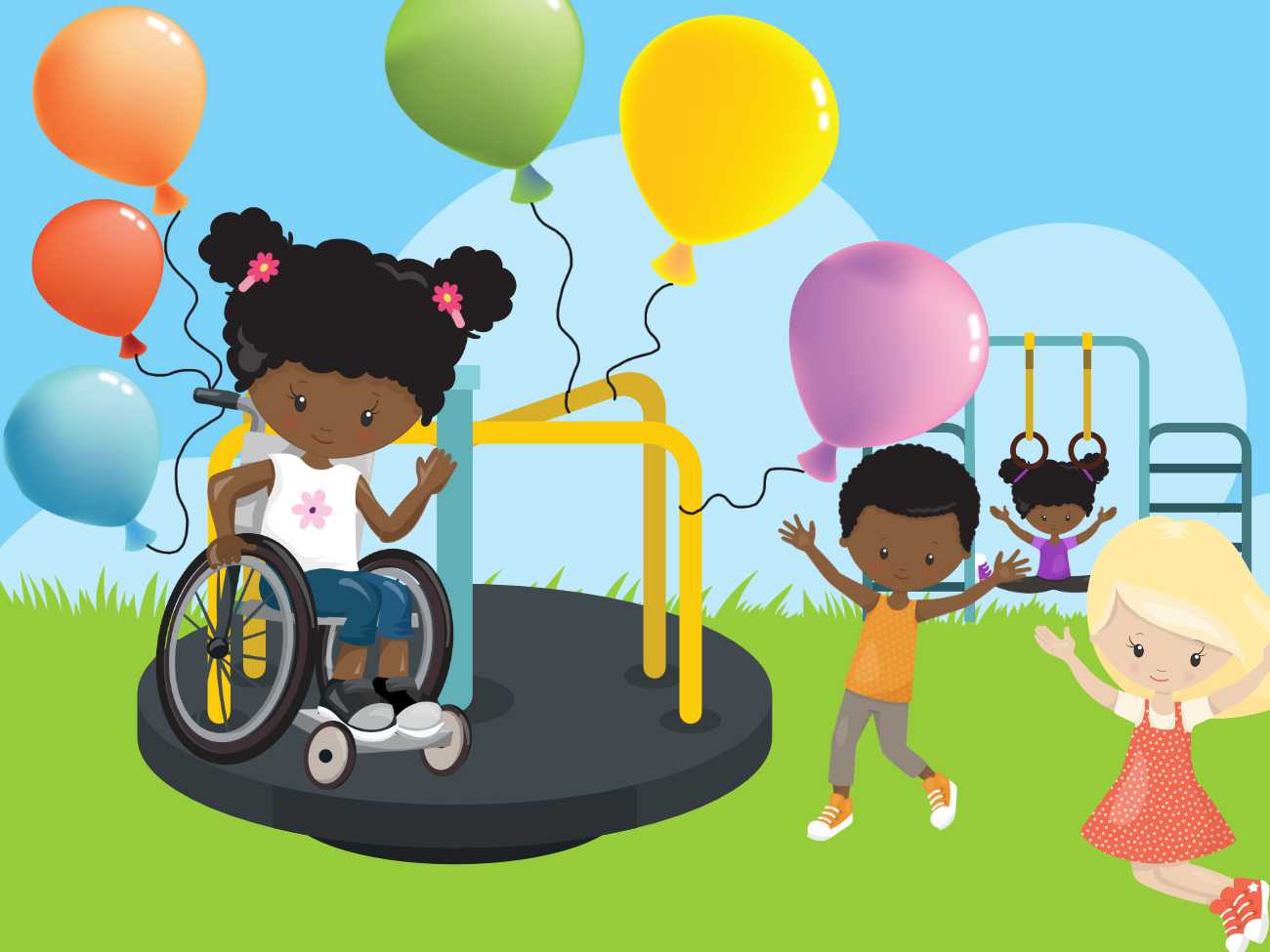 “Zoey, you have to be the first to whizz around with your friends, I tried yesterday, and it is fine, but that doesn’t count!” the Park Man laughed.

And so, Zoey’s Mom wheeled Zoey onto her own special roundabout. Daisy, Kitty and Sam her schoolfriends joined in, four fit on… and who was going to give it a great big spinning push? The Park Man laughed “What did I get myself into?” And the TV man made a film of the first whizzing spin.

The wheelchair roundabout spun and spun, and everybody clapped, and Zoey laughed and laughed, spinning and whizzing and she didn’t want to stop at all.

“I feel giddy, it’s great, my very own whizzy roundabout, I never would have dreamed it.”

But Zoey’s Mom shouted “Stop, you don’t want to spin too much, and let all the other children take a turn Zoey!”

“Yes.” Zoey agreed “I love my whizzing roundabout, but after all those cookies, I feel a tiny bit sick, not a good idea!”

Zoey’s Mom laughed “Yes, wheelie kids can get sick on a whizzing roundabout, too, but Zoey please, not today, please!”

The Park Man laughed too and whispered to Zoey’s Mom. “There is a wheelchair swing and I have a plan, but, please please don’t tell Zoey yet, I need a rest!”

1. In the story, how do the children and community work together to help find a roundabout for Zoey?

2. Do you think one person could have installed a roundabout for Zoey by themselves? Why or why not?

3. What do you think this story might say about working together for a common goal?