Our little party of travelers awakened the next morning refreshed and full of hope, and Dorothy breakfasted like a princess off peaches and plums from the trees beside the river. Behind them was the dark forest they had passed safely through, although they had suffered many discouragements; but before them was a lovely, sunny country that seemed to beckon them on to the Emerald City.

To be sure, the broad river now cut them off from this beautiful land. But the raft was nearly done, and after the Tin Woodman had cut a few more logs and fastened them together with wooden pins, they were ready to start. Dorothy sat down in the middle of the raft and held Toto in her arms. When the Cowardly Lion stepped upon the raft it tipped badly, for he was big and heavy; but the Scarecrow and the Tin Woodman stood upon the other end to steady it, and they had long poles in their hands to push the raft through the water.

They got along quite well at first, but when they reached the middle of the river the swift current swept the raft downstream, farther and farther away from the road of yellow brick. And the water grew so deep that the long poles would not touch the bottom.

“This is bad,” said the Tin Woodman, “for if we cannot get to the land we shall be carried into the country of the Wicked Witch of the West, and she will enchant us and make us her slaves.”

“And then I should get no brains,” said the Scarecrow.

“And I should get no courage,” said the Cowardly Lion.

“And I should get no heart,” said the Tin Woodman.

“And I should never get back to Kansas,” said Dorothy.

“We must certainly get to the Emerald City if we can,” the Scarecrow continued, and he pushed so hard on his long pole that it stuck fast in the mud at the bottom of the river. Then, before he could pull it out again–or let go–the raft was swept away, and the poor Scarecrow was left clinging to the pole in the middle of the river.

“Good-bye!” he called after them, and they were very sorry to leave him. Indeed, the Tin Woodman began to cry, but fortunately remembered that he might rust, and so dried his tears on Dorothy’s apron.

Of course this was a bad thing for the Scarecrow.

“I am now worse off than when I first met Dorothy,” he thought. “Then, I was stuck on a pole in a cornfield, where I could make-believe scare the crows, at any rate. But surely there is no use for a Scarecrow stuck on a pole in the middle of a river. I am afraid I shall never have any brains, after all!”

Down the stream the raft floated, and the poor Scarecrow was left far behind. Then the Lion said:

“Something must be done to save us. I think I can swim to the shore and pull the raft after me, if you will only hold fast to the tip of my tail.”

So he sprang into the water, and the Tin Woodman caught fast hold of his tail. Then the Lion began to swim with all his might toward the shore. It was hard work, although he was so big; but by and by they were drawn out of the current, and then Dorothy took the Tin Woodman’s long pole and helped push the raft to the land.

They were all tired out when they reached the shore at last and stepped off upon the pretty green grass, and they also knew that the stream had carried them a long way past the road of yellow brick that led to the Emerald City.

“What shall we do now?” asked the Tin Woodman, as the Lion lay down on the grass to let the sun dry him.

“We must get back to the road, in some way,” said Dorothy.

“The best plan will be to walk along the riverbank until we come to the road again,” remarked the Lion.

So, when they were rested, Dorothy picked up her basket and they started along the grassy bank, to the road from which the river had carried them. It was a lovely country, with plenty of flowers and fruit trees and sunshine to cheer them, and had they not felt so sorry for the poor Scarecrow, they could have been very happy.

They walked along as fast as they could, Dorothy only stopping once to pick a beautiful flower; and after a time the Tin Woodman cried out: “Look!”

Then they all looked at the river and saw the Scarecrow perched upon his pole in the middle of the water, looking very lonely and sad.

“What can we do to save him?” asked Dorothy.

The Lion and the Woodman both shook their heads, for they did not know. So they sat down upon the bank and gazed wistfully at the Scarecrow until a Stork flew by, who, upon seeing them, stopped to rest at the water’s edge.

“Who are you and where are you going?” asked the Stork.

“I am Dorothy,” answered the girl, “and these are my friends, the Tin Woodman and the Cowardly Lion; and we are going to the Emerald City.”

“This isn’t the road,” said the Stork, as she twisted her long neck and looked sharply at the queer party.

“I know it,” returned Dorothy, “but we have lost the Scarecrow, and are wondering how we shall get him again.”

“Where is he?” asked the Stork.

“Over there in the river,” answered the little girl.

“If he wasn’t so big and heavy I would get him for you,” remarked the Stork.

“He isn’t heavy a bit,” said Dorothy eagerly, “for he is stuffed with straw; and if you will bring him back to us, we shall thank you ever and ever so much.”

“Well, I’ll try,” said the Stork, “but if I find he is too heavy to carry I shall have to drop him in the river again.”

So the big bird flew into the air and over the water till she came to where the Scarecrow was perched upon his pole. Then the Stork with her great claws grabbed the Scarecrow by the arm and carried him up into the air and back to the bank, where Dorothy and the Lion and the Tin Woodman and Toto were sitting.

When the Scarecrow found himself among his friends again, he was so happy that he hugged them all, even the Lion and Toto; and as they walked along he sang “Tol-de-ri-de-oh!” at every step, he felt so gay.

“I was afraid I should have to stay in the river forever,” he said, “but the kind Stork saved me, and if I ever get any brains I shall find the Stork again and do her some kindness in return.”

“That’s all right,” said the Stork, who was flying along beside them. “I always like to help anyone in trouble. But I must go now, for my babies are waiting in the nest for me. I hope you will find the Emerald City and that Oz will help you.”

“Thank you,” replied Dorothy, and then the kind Stork flew into the air and was soon out of sight. 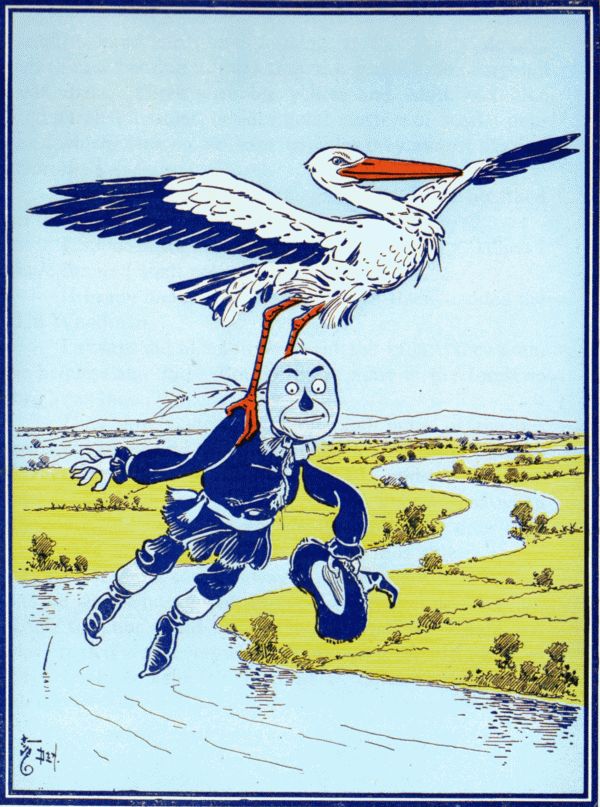 They walked along listening to the singing of the brightly colored birds and looking at the lovely flowers which now became so thick that the ground was carpeted with them. There were big yellow and white and blue and purple blossoms, besides great clusters of scarlet poppies, which were so brilliant in color they almost dazzled Dorothy’s eyes.

“Aren’t they beautiful?” the girl asked, as she breathed in the spicy scent of the bright flowers.

“I suppose so,” answered the Scarecrow. “When I have brains, I shall probably like them better.”

“If I only had a heart, I should love them,” added the Tin Woodman.

“I always did like flowers,” said the Lion. “They seem so helpless and frail. But there are none in the forest so bright as these.”

They now came upon more and more of the big scarlet poppies, and fewer and fewer of the other flowers; and soon they found themselves in the midst of a great meadow of poppies. Now it is well known that when there are many of these flowers together their odor is so powerful that anyone who breathes it falls asleep, and if the sleeper is not carried away from the scent of the flowers, he sleeps on and on forever. But Dorothy did not know this, nor could she get away from the bright red flowers that were everywhere about; so presently her eyes grew heavy and she felt she must sit down to rest and to sleep.

But the Tin Woodman would not let her do this.

“We must hurry and get back to the road of yellow brick before dark,” he said; and the Scarecrow agreed with him. So they kept walking until Dorothy could stand no longer. Her eyes closed in spite of herself and she forgot where she was and fell among the poppies, fast asleep.

“What shall we do?” asked the Tin Woodman.

“If we leave her here she will die,” said the Lion. “The smell of the flowers is killing us all. I myself can scarcely keep my eyes open, and the dog is asleep already.”

It was true; Toto had fallen down beside his little mistress. But the Scarecrow and the Tin Woodman, not being made of flesh, were not troubled by the scent of the flowers.

“Run fast,” said the Scarecrow to the Lion, “and get out of this deadly flower bed as soon as you can. We will bring the little girl with us, but if you should fall asleep you are too big to be carried.”

So the Lion aroused himself and bounded forward as fast as he could go. In a moment he was out of sight.

“Let us make a chair with our hands and carry her,” said the Scarecrow. So they picked up Toto and put the dog in Dorothy’s lap, and then they made a chair with their hands for the seat and their arms for the arms and carried the sleeping girl between them through the flowers.

On and on they walked, and it seemed that the great carpet of deadly flowers that surrounded them would never end. They followed the bend of the river, and at last came upon their friend the Lion, lying fast asleep among the poppies. The flowers had been too strong for the huge beast and he had given up at last, and fallen only a short distance from the end of the poppy bed, where the sweet grass spread in beautiful green fields before them.

“We can do nothing for him,” said the Tin Woodman, sadly; “for he is much too heavy to lift. We must leave him here to sleep on forever, and perhaps he will dream that he has found courage at last.”

“I’m sorry,” said the Scarecrow. “The Lion was a very good comrade for one so cowardly. But let us go on.”

They carried the sleeping girl to a pretty spot beside the river, far enough from the poppy field to prevent her breathing any more of the poison of the flowers, and here they laid her gently on the soft grass and waited for the fresh breeze to waken her.

The Princess and the Goblin – Chapter 3