The following story is a sample of the chapter book Rosco the Rascal Visits the Pumpkin Patch. You can read the first two chapters below.

If you like it, you can find out more about the rest of the story here.

It was a beautiful September morning. Ten-year-old James and seven-year-old Mandy McKendrick thought they couldn’t sit still one minute longer. It had been a long drive.

The minivan came to a stop in the farm’s parking lot. James pushed the button to open the automatic sliding door next to his seat.

The door slid open, and Rosco, their German shepherd, leaped out before anyone could stop him.

“Rosco, come back here! Bad dog!” called Mandy. But her shouts were useless. A small pumpkin was on the move, and it had caught Rosco’s eye as they’d approached the farm.

Rosco had never seen a pumpkin before. As it rolled down a gentle hill, he thought it looked like something he’d love to chase. 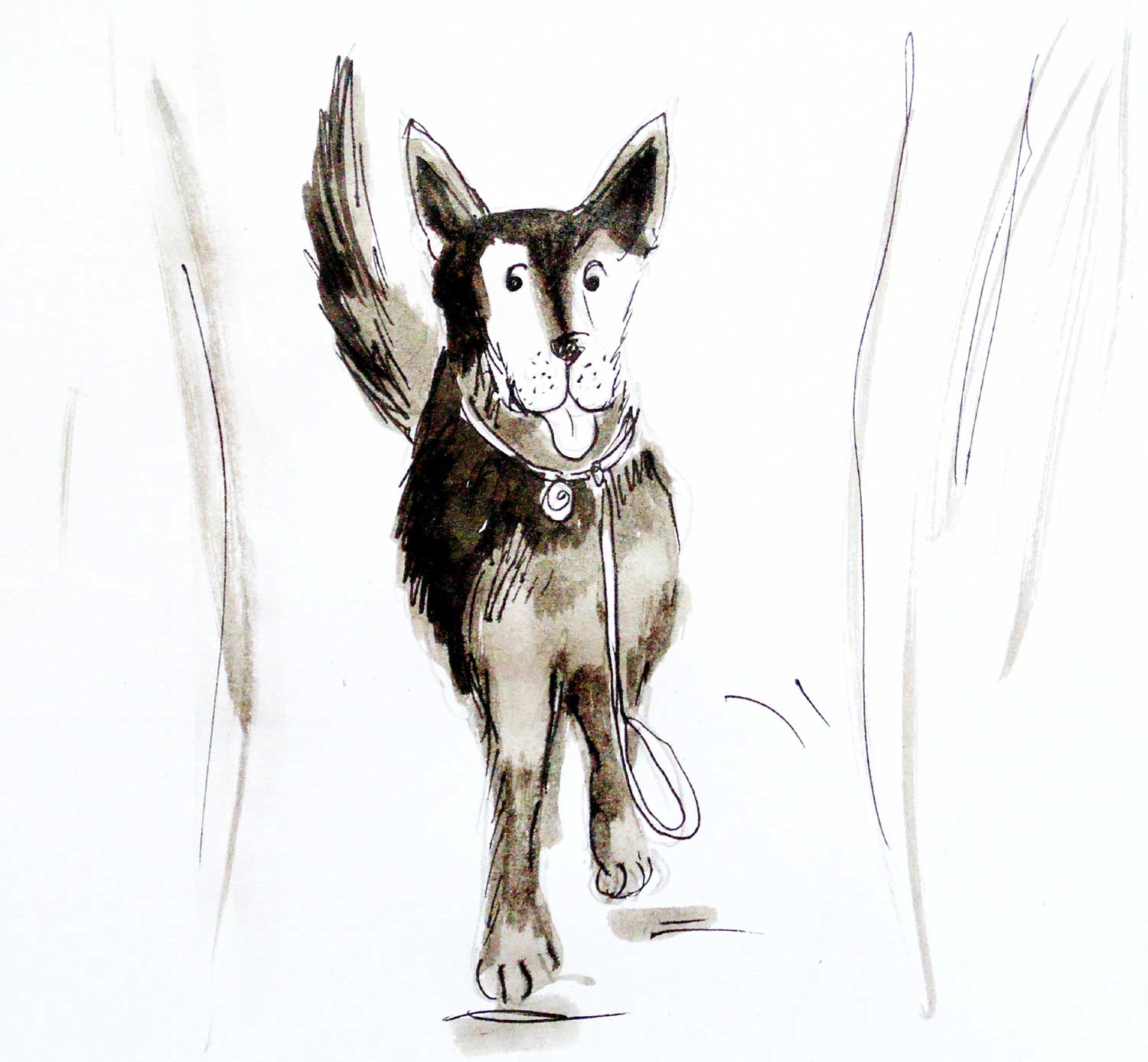 It was early in the morning, and not many people had arrived on the farm yet. The wide, grassy field was empty except for this lively dog.

A man wearing a western hat reached out to stop the rest of his pumpkins from rolling out of the wheelbarrow as Rosco raced after the pumpkin.

Brother and sister James and Mandy jumped out of the minivan, exchanging a worried look. This kind of thing had never happened on their trip to the pumpkin patch before. Their rascally, large dog was already at least fifty feet away from them and still running at breakneck speed.

“Uh oh,” Mandy said slowly. She watched as Rosco caught up to the pumpkin and sank his big teeth straight into the stem.

Then Rosco lifted his head. The pumpkin had become stuck in his teeth!

“Oh, my goodness!” Mom said as she approached.

But Rosco didn’t mind the pumpkin being stuck there and began to run again. He ran toward the man in the hat, coming just close enough to tease him. The man tried to grab the pumpkin from him. But Rosco stayed out of reach. I love to play keep-away, Rosco thought.

Even with a pumpkin stuck in his teeth, Rosco still wore a mischievous grin.

The kids now stood near the man, trying to coax Rosco back. Their mom and dad started to cross the field toward them, hollering this and that. But nothing worked.

“Rosco, come here! That’s not yours! Give it back!” ordered Mandy. “You’ll get your own pumpkin later!”

James started to chase Rosco, but that made Rosco run even faster because he wanted to be chased. The dog switched directions every time James got close. His tail wagged every time he slowed down. This game never gets old, Rosco thought.

“He’s only going to keep running away if you chase him,” Mandy said.

Rosco ran another wide circle around them, and then trotted closer. Mandy started for his collar, but he bolted away before she could reach him.

Who wants to try next? Rosco thought.

But Mandy had run out of patience. Everyone else had too, except for Rosco. Mandy stomped her foot. “Give it to me, Rosco! Now!”

The man in the hat had another idea. “Here, boy.” He held out one hand to the dog.

“I won’t chase you, buddy,” he explained softly. “My kids are over there waiting, and I know you’re too fast for me.”

He turned and waved to three small children and a sweet looking woman next to a silver pick-up truck. They waved back.

He pointed to the pumpkin in Rosco’s mouth. “My son picked that one out all by himself this morning. He was really hoping to carve it into a jack-o-lantern come late October. And we have to be on our way soon.”

Rosco listened, tilting his head to one side. He trotted up to the man, sat down, and lowered his head. The doggy smile finally disappeared. His eyes now bore an apology.

Rosco tried to let the pumpkin go, but it was still stuck. He was beginning to drool all over it.

Rosco wanted this nice man’s son to have his pumpkin back. He didn’t want to spoil anyone’s fun. He had only wanted to have a little fun of his own.

The man squatted down in front of the dog. He reached out kindly and pulled the pumpkin from Rosco’s teeth, quite surprised to have it returned. Rosco’s fangs had done some damage. Two deep holes were left. But the pumpkin was still in one piece.

“Well, there we are! I guess we can still carve this, you ol’ rascal,” the man decided. “What’s your dog’s name?” he said to the kids.

James told him that his rascal of a dog was named Rosco.

“Well, Rosco, I thought this pumpkin was a ‘goner! But I think it’ll be fine…”

He picked up the small pumpkin and waved it at his kids. They cheered for their dad and the big, shiny, black dog that had put on such an entertaining show. 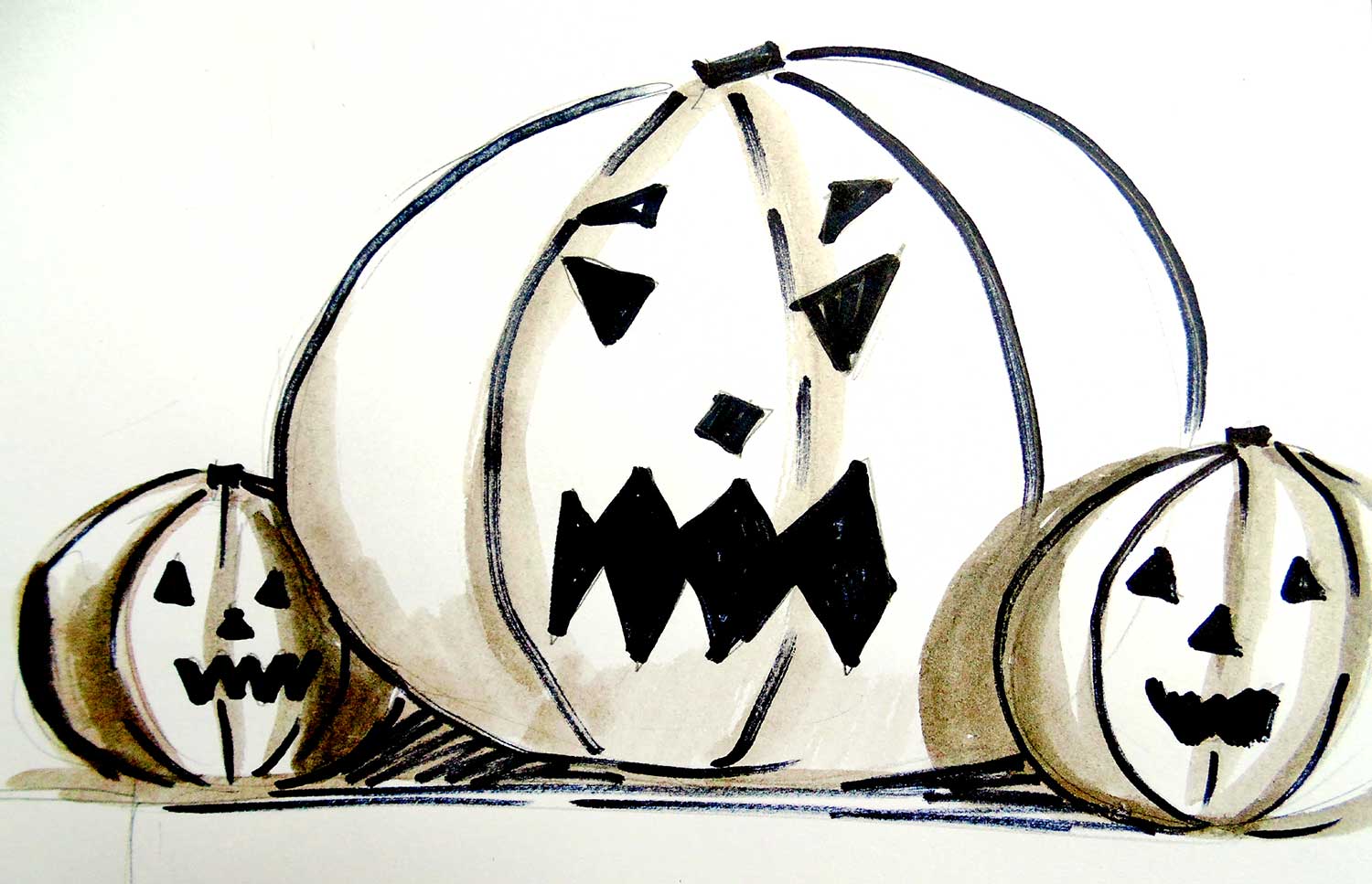 Mandy apologized for her dog and told the man that Rosco was still just a big puppy. “He can be incorrigible at times, or so my mother says.”

He gave Rosco a tough look, then grinned widely at him, nodding to Mandy, James, and Mr. and Mrs. McKendrick.

Mandy reached for Rosco’s leash from Mom and fastened it onto his collar.

“Leave other people’s pumpkins alone next time,” Mandy warned Rosco. Then she scratched his soft head as she whispered to him, “but good boy for giving it back!”

NEW MEMBER OF THE FAMILY

James and Mandy McKendrick visited the pumpkin patch every fall with their mother and father. It had become a late September tradition for them. They loved the cool and foggy mornings on the drive over, and the warm, sunny days at the farm.

The drive took about an hour, and the McKendrick family always arrived as soon as the farm opened its gates.

They wanted to beat the Saturday morning rush. People came from miles around to taste a bit of the country life each fall.

They’d marvel at the red and orange leaves on the trees. They’d gaze at the wide-open fields, and inhale the fresh, country smell of barn and field. 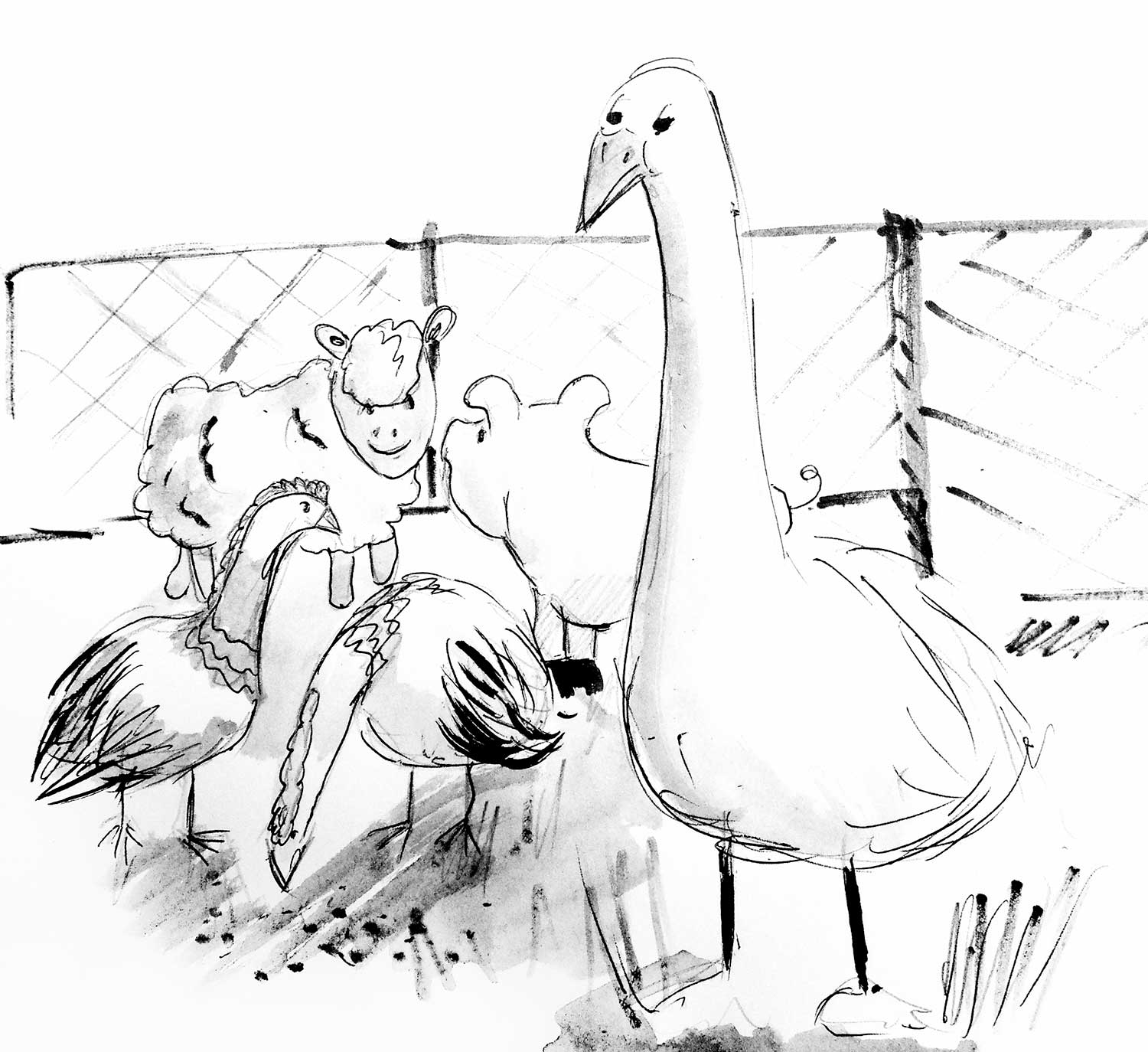 So, the family carefully planned their day. First came the pony ride.

“I want the white one!” Mandy said when she was younger. She knew she should want a brown one, to match her long brown hair, but she didn’t. She always wanted a white one.

“I just can’t help it,” she’d say. This year Mom had asked if the color of the pony was going to matter today, now that she was a whole year older, and she had replied “No. “ Then, she said, “Well, maybe…”

James, with his red hair and freckles, was not so choosy. He had always been happy with any sort of pony when he was younger, but he told them on the drive over that he was getting too old for ponies.

“I’m ten now. I went horseback riding this summer. This is way too easy,” he said.

It was true. It was easy. Each of the ponies was tied to the one in front of it, and they only went around in a big circle. So James had announced that he would just sit and wait while Mandy rode this year.

“Well, I still want to ride one even if James doesn’t!” Mandy said.

After a tasty lunch, the corn maze, and maybe a hayride, they’d always end their day by picking out pumpkins.

But this year’s visit was going to be different, not just because the kids were getting older. It was because the McKendricks had made a charming new addition to the family last summer, and they had brought him along today.

He stood on four legs and they named him Rosco. He was a German shepherd, almost fully-grown. He weighed eighty-five pounds and was turning two years old this month.

His color was mostly black. He had friendly, dark eyes, tan legs, and a little bit of white fur on his paws and face.

“Awesome!” were the only words that came from James’s mouth, but the look on his face said that he completely agreed with Mandy.

Rosco was playful and full of energy, and always seemed to be wearing a friendly doggy grin.

James especially loved having someone around who was always ready to play, no matter what the game: fetch, chase, tug of war, or race-ya!

Also, James liked to hang out with the dog because he and Rosco never got into fights with each other. Like many brothers and sisters, James and Mandy argued every so often.

But Rosco was always easy to get along with. Mandy had taught Rosco to jump over the picnic table bench in their yard, shake hands with his paw, and catch a tennis ball right out of the air.

Mandy also liked having someone who liked quiet time as much as she did. Sometimes she would lay her head over the back of Rosco’s neck when he was sprawled out on the floor and use him as a pillow.

Rosco had a terribly loud and frightening bark. His bark scared off the coyotes that sometimes roamed the hills surrounding their house, so Mandy and James always felt safe with Rosco around.

Rosco had become such a favorite of the McKendricks that he now went nearly everywhere they did, or at least as often as Mom would allow.

“He does seem to find trouble easily enough,” Mom would say when she was trying to be agreeable and not give them an outright “No”.

“Yes, but he doesn’t mean to,” Mandy would say.

More often than not these days, the kids got their way, and Rosco came along to wherever it was that the family was going.

So Rosco’s tail wagged quickly as the family walked toward the pony ride this beautiful Saturday morning.

Rosco was happy that he’d only been put on a leash and not been punished after the pumpkin incident. Lucky break. Next time, I’d better think first and stay out of trouble, he thought. 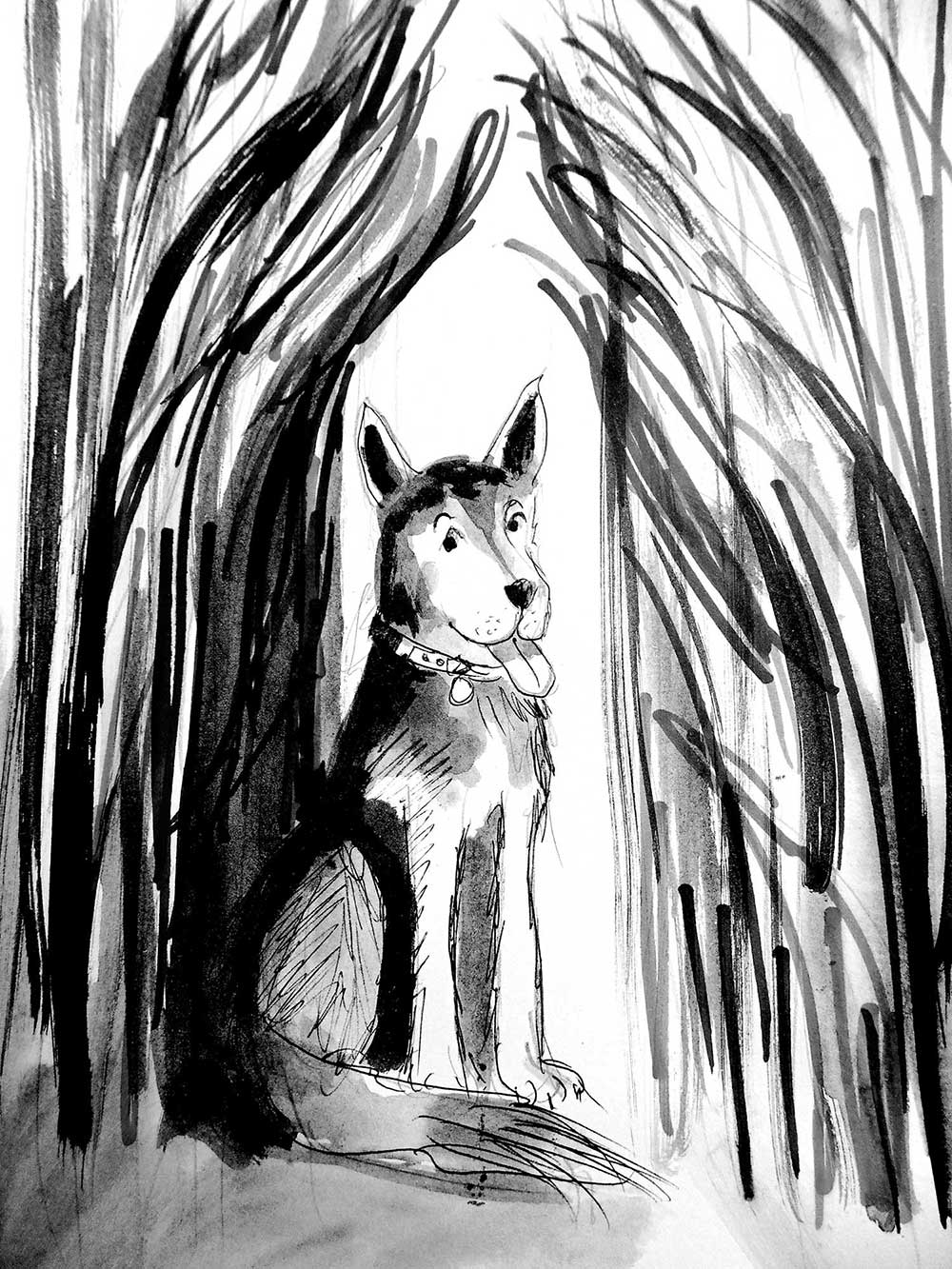 If you enjoyed reading this sample of Rosco the Rascal Visits the Pumpkin Patch, click below to read more about Rosco and his author Shana here. 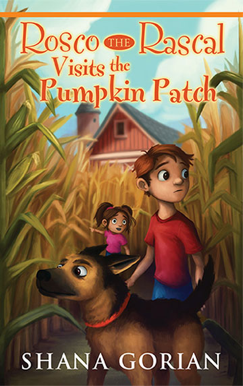 The Tale of Samuel Whiskers