Little Tuk! An odd name, to be sure! However, it was not the little boy’s real name. His real name was Carl; but when he was so young that he could not speak plainly, he used to call himself Tuk. It would be hard to say why, for it is not at all like “Carl”; but the name does as well as any, if one only knows it.

Little Tuk was left at home to take care of his sister Gustava, who was much younger than himself; and he had also to learn his lesson. Here were two things to be done at the same time, and they did not at all suit each other. The poor boy sat with his sister in his lap, singing to her all the songs he knew, yet giving, now and then, a glance into his geography, which lay open beside him. By to-morrow morning he must know the names of all the towns in Seeland by heart, and be able to tell about them all that could be told.

His mother came at last, and took little Gustava in her arms. Tuk ran quickly to the window and read and read till he had almost read his eyes out—for it was growing dark, and his mother could not afford to buy candles.

“There goes the old washerwoman down the lane,” said the mother, as she looked out of the window. “She can hardly drag herself along, poor thing; and now she has to carry that heavy pail from the pump. Be a good boy, little Tuk, and run across to help the poor creature, will you not?”

And little Tuk ran quickly and helped to bear the weight of the pail. But when he came back into the room, it was quite dark. Nothing was said about a candle, and it was of no use to wish for one; he must go to his little trundle-bed, which was made of an old settle.

There he lay, still thinking of the geography lesson, of Seeland, and of all that the master had said. He could not read the book again, as he should by rights have done, for want of a light. So he put the geography-book under his pillow. Somebody had once told him that would help him wonderfully to remember his lesson, but he had never yet found that one could depend upon it.

There he lay and thought and thought, till all at once he felt as though some one were gently sealing his mouth and eyes with a kiss. He slept and yet did not sleep, for he seemed to see the old washerwoman’s mild, kind eyes fixed upon him, and to hear her say: “It would be a shame, indeed, for you not to know your lesson to-morrow, little Tuk. You helped me; now I will help you, and our Lord will help us both.”

All at once the leaves of the book began to rustle under little Tuk’s head, and he heard something crawling about under his pillow.

“Cluck, cluck, cluck!” cried a hen, as she crept towards him. (She came from the town of Kjöge.) “I’m a Kjöge hen,” she said. And then she told him how many inhabitants the little town contained, and about the battle that had once been fought there, and how it was now hardly worth mentioning, there were so many greater things.

All in a moment he was on horseback, and on he went, gallop, gallop! Scratch, scratch! Kribbley crabbley! and now a great wooden bird jumped down upon the bed. It was the popinjay from the shooting ground at Præstö. He had reckoned the number of inhabitants in Præstö, and found that there were as many as he had nails in his body. He was a proud bird. “Thorwaldsen lived in one corner of Præstö, close by me. Am I not a pretty bird, a merry popinjay?”

And now little Tuk no longer lay in bed. All in a moment he was on horseback, and on he went, gallop, gallop! A splendid knight, with a bright helmet and waving plume,—a knight of the olden time,—held him on his own horse; and on they rode together, through the wood of the ancient city of Vordingborg, and it was once again a great and busy town. The high towers of the king’s castle rose against the sky, and bright lights were seen gleaming through the windows. Within were music and merrymaking. King Waldemar was leading out the noble ladies of his court to dance with him. 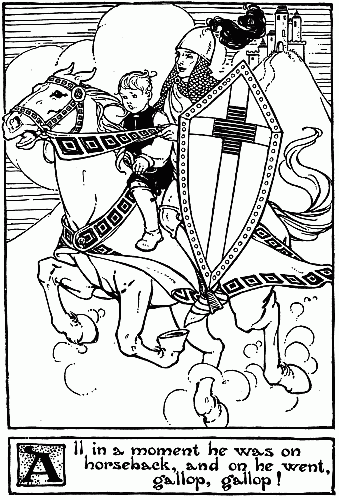 Suddenly the morning dawned, the lamps grew pale, the sun rose, the outlines of the buildings faded away, and at last one high tower alone remained to mark the spot where the royal castle had stood. The vast city had shrunk into a poor, mean-looking little town. The schoolboys, coming out of school with their geography-books under their arms, said, “Two thousand inhabitants”; but that was a mere boast, for the town had not nearly so many.

And little Tuk lay in his bed. He knew not whether he had been dreaming or not, but again there was some one close by his side.

“Little Tuk! little Tuk!” cried a voice; it was the voice of a young sailor boy. “I am come to bring you greeting from Korsör. Korsör is a new town, a living town, with steamers and mail coaches. Once people used to call it a low, ugly place, but they do so no longer.

“‘I dwell by the seaside,’ says Korsör; ‘I have broad highroads and pleasure gardens; and I have given birth to a poet, a witty one, too, which is more than all poets are. I once thought of sending a ship all round the world; but I did not do it, though I might as well have done so. I dwell so pleasantly, close by the port; and I am fragrant with perfume, for the loveliest roses bloom round about me, close to my gates.'”

And little Tuk could smell the roses and see them and their fresh green leaves. But in a moment they had vanished; the green leaves spread and thickened—a perfect grove had grown up above the bright waters of the bay, and above the grove rose the two high-pointed towers of a glorious old church. From the side of the grass-grown hill gushed a fountain in rainbow-hued streams, with a merry, musical voice, and close beside it sat a king, wearing a gold crown upon his long dark hair.

This was King Hroar of the springs; and hard by was the town of Roskilde (Hroar’s Fountain). And up the hill, on a broad highway, went all the kings and queens of Denmark, wearing golden crowns; hand in hand they passed on into the church, and the deep music of the organ mingled with the clear rippling of the fountain. For nearly all the kings and queens of Denmark lie buried in this beautiful church. And little Tuk saw and heard it all.

Then all vanished; though where it went he knew not. It seemed like turning the leaves of a book.

And now there stood before him an old peasant woman from Sorö, the quiet little town where grass grows in the very market place. Her green linen apron was thrown over her head and back, and the apron was very wet, as if it had been raining heavily.

“And so it has,” she said. And she told a great many pretty things from Holberg’s comedies, and recited ballads about Waldemar and Absalon; for Holberg had founded an academy in her native town.

All at once she cowered down and rocked her head as if she were a frog about to spring. “Koax!” cried she; “it is wet, it is always wet, and it is as still as the grave in Sorö.” She had changed into a frog. “Koax!” and again she was an old woman. “One must dress according to the weather,” she said.

“It is wet! it is wet! My native town is like a bottle; one goes in at the cork, and by the cork one must come out. In old times we had the finest of fish; now we have fresh, rosy-cheeked boys at the bottom of the bottle. There they learn wisdom—Greek, Greek, and Hebrew! Koax!”

It sounded exactly as if frogs were croaking, or as if some one were walking over the great swamp with heavy boots. So tiresome was her tone, all on the same note, that little Tuk fell fast asleep; and a very good thing it was for him.

But even in sleep there came a dream, or whatever else it may be called. His little sister Gustava, with her blue eyes and flaxen ringlets, was grown into a tall, beautiful girl, who, though she had no wings, could fly; and away they now flew over Seeland—over its green woods and blue waters.

“Hark! Do you hear the cock crow, little Tuk? ‘Cock-a-doodle-do!’ The fowls are flying hither from Kjöge, and you shall have a farmyard, a great, great poultry yard of your own! You shall never suffer hunger or want. The golden goose, the bird of good omen, shall be yours; you shall become a rich and happy man. Your house shall rise up like King Waldemar’s towers and be richly decked with statues like those of Thorwaldsen at Præstö.

“Understand me well; your good name shall be borne round the world, like the ship that was to sail from Korsör, and at Roskilde you shall speak and give counsel wisely and well, little Tuk, like King Hroar; and when at last you shall lie in your peaceful grave you shall sleep as quietly—”

“As if I lay sleeping in Sorö,” said Tuk, and he woke. It was a bright morning, and he could not remember his dream, but it was not necessary that he should. One has no need to know what one will live to see.

And now he sprang quickly out of bed and sought his book, that had lain under his pillow. He read his lesson and found that he knew the towns perfectly well.

And the old washerwoman put her head in at the door and said, with a friendly nod: “Thank you, my good child, for yesterday’s help. May the Lord fulfill your brightest and most beautiful dreams! I know he will.”

Little Tuk had forgotten what he had dreamed, but it did not matter. There was someone above who knew it all.

Are you seeking more stories about bedtime to read to your child? Read our review of the Ten Best Children’s Books About Bedtime

1. Little Tuk helped a poor old lady carry her bucket, and in Little Tuk’s dreams, the lady helped him learn his geography lessons. What do you think this might say about kindness?

2. How did Little Tuk learn all about geography in his dreams? Was this a good way of learning? Why?

3. Little Tuk discovers all sorts of wonderful worlds when he goes to sleep. What do you like best about going to bed?

The Adventures of Blinky Bill

The Raven Who Would Rival The Eagle