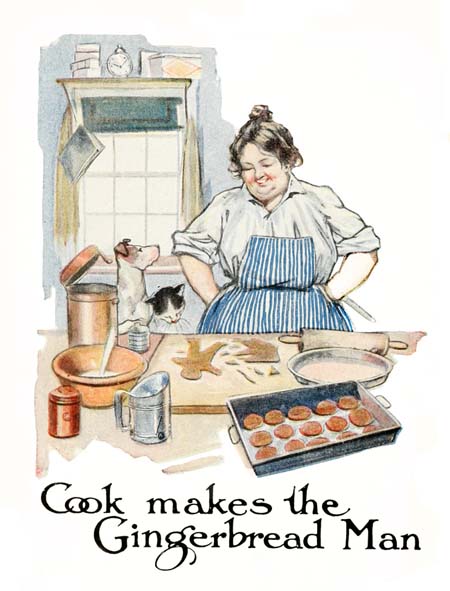 One day, a cook went into the kitchen to make some gingerbread. She took some flour and water, and treacle and ginger, and mixed them all well together, and she put in some more water to make it thin, and then some more flour to make it thick, and a little salt and some spice, and then she rolled it out into a beautiful, smooth, dark-yellow dough.

Then she took the square tins and cut out some square cakes for the little boys, and with some round tins she cut out some round cakes for the little girls, and then she said, “I’m going to make a little gingerbread man for little Bobby.” So she took a nice round lump of dough for his body, and a smaller lump for his head, which she pulled out a little for the neck. Two other lumps were stuck on beneath for the legs, and were pulled out into proper shape, with feet and toes all complete, and two still smaller pieces were made into arms, with dear little hands and fingers. 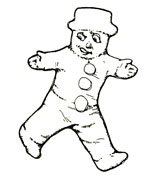 But the nicest work was done on the head, for the top was frizzed up into a pretty sugary hat; on either side was made a dear little ear, and in front, after the nose had been carefully moulded, a beautiful mouth was made out of a big raisin, and two bright little eyes with burnt almonds and caraway seeds. 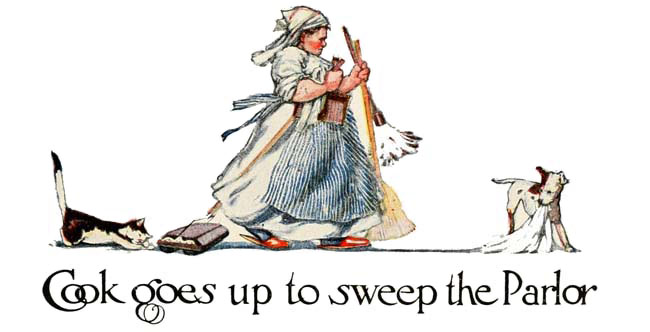 Then she went up to sweep the parlor, and she swept and she swept till the clock struck twelve, when she dropped her broom in a hurry, and exclaiming, “Lawks! the gingerbread will be all baked to a cinder,” she ran down into the kitchen, and threw open the oven door. And the square cakes were all done, nice and hard and brown, and the round cakes were all done, nice and hard and brown, and the gingerbread man was all done too, nice and hard and brown; and he was standing up in his corner, with his little caraway-seed eyes sparkling, and his raisin mouth bubbling over with mischief, while he waited for the oven door to be opened. The instant the door was opened, with a hop, skip, and a jump, he went right over the square cakes and the round cakes, and over the cook’s arm, and before she could say “Jack Robinson” he was running across the kitchen floor, as fast as his little legs would carry him, towards the back door, which was standing wide open, and through which he could see the garden path.

The old cook turned round as fast as she could, which wasn’t very fast, for she was rather a heavy woman and she had been quite taken by surprise, and she saw lying right across the door-way, fast asleep in the sun, old Mouser, the cat.

“Mouser, Mouser,” she cried, “stop the gingerbread man! I want him for little Bobby.” 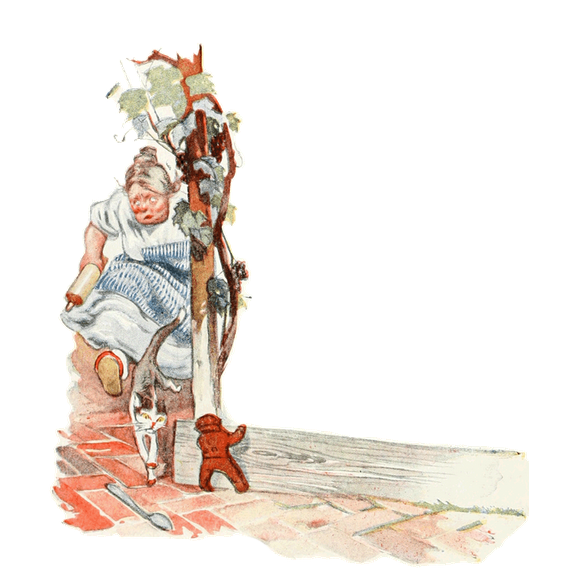 When the cook first called, Mouser thought it was only some one calling in her dreams, and simply rolled over lazily; and the cook called again, “Mouser, Mouser!” The old cat sprang up with a jump, but just as she turned round to ask the cook what all the noise was about, the little gingerbread man cleverly jumped under her tail, and in an instant was trotting down the garden walk. Mouser turned in a hurry and ran after, although she was still rather too sleepy to know what it was she was trying to catch, and after the cat came the cook, lumbering along rather heavily, but also making pretty good speed.

Now at the bottom of the walk, lying fast asleep in the sun against the warm stones of the garden wall, was Towser, the dog.

And the cook called out: “Towser, Towser, stop the gingerbread man! I want him for little Bobby.”

And when Towser first heard her calling he thought it was some one speaking in his dreams, and he only turned over on his side, with another snore, and then the cook called again, “Towser, Towser, stop him, stop him!” 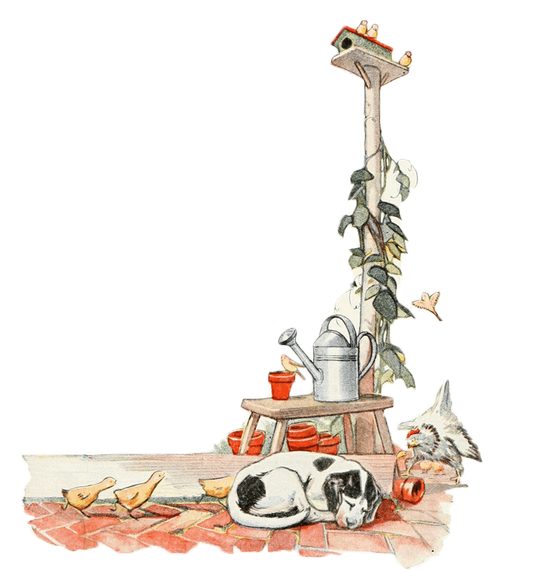 Then the dog woke up in good earnest, and jumped up on his feet to see what it was that he should stop. But just as the dog jumped up, the little gingerbread man, who had been watching for the chance, quietly slipped between his legs, and climbed up on the top of the stone wall, so that Towser saw nothing but the cat running towards him down the walk, and behind the cat the cook, now quite out of breath.

He thought at once that the cat must have stolen something, and that it was the cat the cook wanted him to stop. Now, if there was anything that Towser liked, it was going after the cat, and he jumped up the walk so fiercely that the poor cat did not have time to stop herself or to get out of his way, and they came together with a great fizzing, and barking, and meowing, and howling, and scratching, and biting, as if a couple of Catherine-wheels had gone off in the wrong way and had got mixed up with one another. 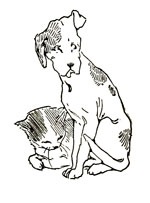 But the old cook had been running so hard that she was not able to stop herself any better than the cat had done, and she fell right on top of the mixed up dog and cat, so that all three rolled over on the walk in a heap together. 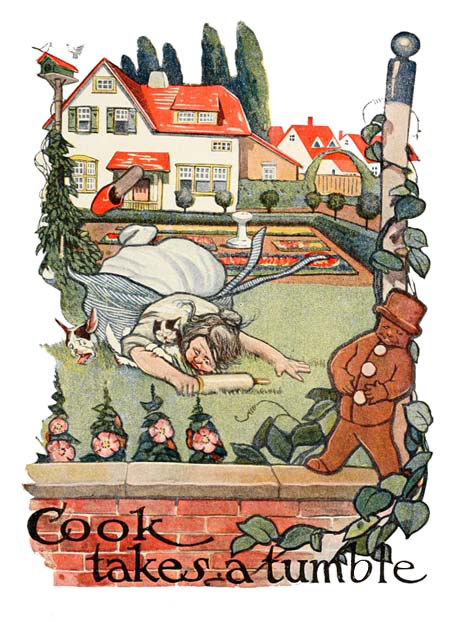 Meanwhile, the gingerbread man had climbed up on the garden wall, and stood on the top with his hands in his pockets, looking at the scrimmage, and laughing till the tears ran down from his little caraway-seed eyes and his raisin mouth was bubbling all over with fun.

After a little while, the cat managed to pull herself out from under the cook and the dog, and a very cast-down and crumpled-up-looking cat she was. She had had enough of hunting gingerbread men, and she crept back to the kitchen to repair damages.

The dog, who was very cross because his face had been badly scratched, let go of the cook, and at last, catching sight of the gingerbread man, made a bolt for the garden wall. The cook picked herself up, and although her face was also badly scratched and her dress was torn, she was determined to see the end of the chase, and she followed after the dog, though this time more slowly.

When the gingerbread man saw the dog coming, he jumped down on the farther side of the wall, and began running across the field. Now in the middle of the field was a tree, and at the
foot of the tree was lying Jocko, the monkey. He wasn’t asleep—monkeys never are—and when he saw the little man running across the field and heard the cook calling, “Jocko, Jocko, stop the gingerbread man,” he at once gave one big jump. But he jumped so fast and so far that he went right over the gingerbread man, and as luck would have it, he came down on the back of Towser, the dog, who had just scrambled over the wall, and whom he had not before noticed. Towser was naturally taken by surprise, but he turned his head around and promptly bit off the end of the monkey’s tail, and Jocko quickly jumped off again, chattering his indignation. 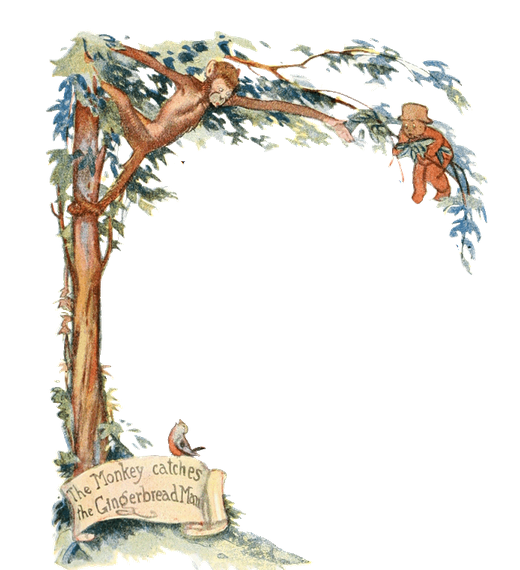 Meanwhile, the gingerbread man had got to the bottom of the tree, and was saying to himself: “Now, I know the dog can’t climb a tree, and I don’t believe the old cook can climb a tree; and as for the monkey I’m not sure, for I’ve never seen a monkey before, but I am going up.”

So he pulled himself up hand over hand until he had got to the topmost branch.

But the monkey had jumped with one spring onto the lowest branch, and in an instant he also was at the top of the tree. 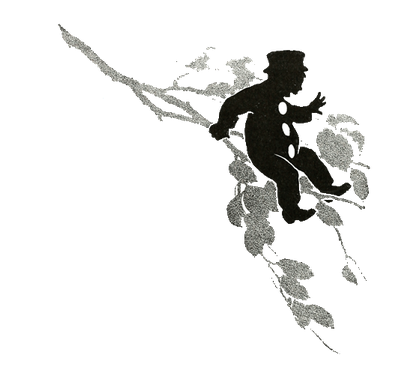 And then what do you think happened? Why, little Bobby himself came running up. He had been taking his noon-day nap upstairs, and in his dreams it seemed as if he kept hearing people call “Little Bobby, little Bobby!” until finally he jumped up with a start, and was so sure that some one was calling him that he ran down-stairs, without even waiting to put on his shoes. 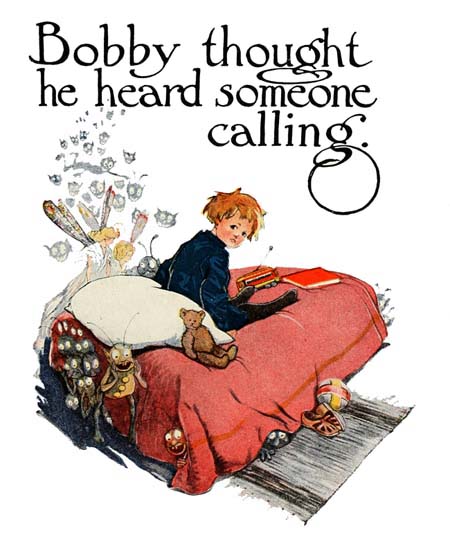 As he came down, he could see through the window in the field beyond the garden the cook, and the dog, and the monkey, and could even hear the barking of Towser and the chattering of Jocko. He scampered down the walk, with his little bare feet pattering against the warm gravel, climbed over the wall, and in a few seconds arrived under the tree, just as Jocko was holding up the poor little gingerbread man. 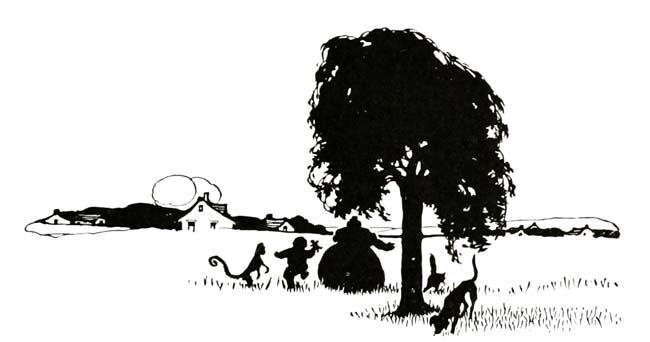 “Drop it, Jocko!” cried Bobby, and drop it Jocko did, for he always had to mind Bobby. He dropped it so straight that the gingerbread man fell right into Bobby’s uplifted pinafore.

Then Bobby held him up and looked at him, and the little raisin mouth puckered down lower than ever, and the tears ran right out of the caraway-seed eyes.

But Bobby was too hungry to mind gingerbread tears, and he gave one big bite, and swallowed down both legs and a piece of the body. 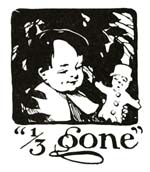 Bobby gave a second bite, and swallowed the rest of the body and the arms. 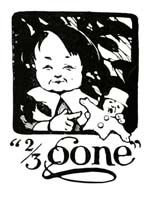 Bobby gave a third bite, and gulped down the head.

And so he was—and that is the end of the story. 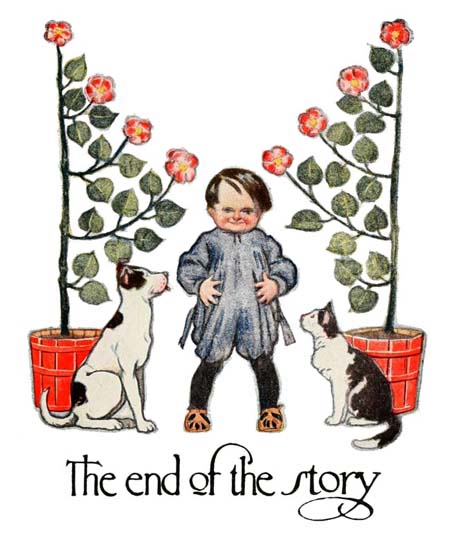 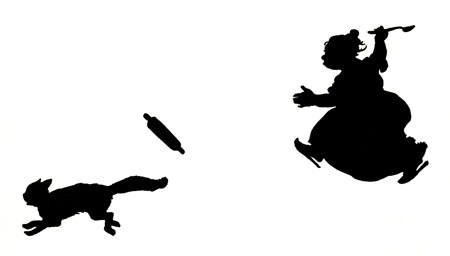 Short story for kids by G.H.P.

Audio story read by Trudi Baldwin, with thanks.

1. Why do you think the Gingerbread Man was so cheeky to everyone at the farm?

2. Think of some other shapes the cook could have made out of her gingerbread, that might not have caused her so much trouble.

3. Do you think Bobby should have eaten the gingerbread man? Why or why not?

The Book On The Top Shelf