In the days of good king Arthur there lived a countryman and his wife who, though they had plenty to eat and to drink, and a very comfortable cottage to live in, were not at all happy.

They had no children, and they both wished very much for a baby. The wife was often in tears when her husband was out at work and she was all alone, because she had not an infant to take care of and nurse. One day, as she sat weeping by herself, more than usually sad, she said aloud, “If I only had a dear little baby, I should not care what it was like. I should be thankful for one if it were no bigger than my husband’s thumb.”

Now it happened that the Queen of the Fairies was passing by, though the poor woman could not see her, and as she knew the farmer’s wife was kind to the poor and likely to be a good mother, she thought she would grant her wish. 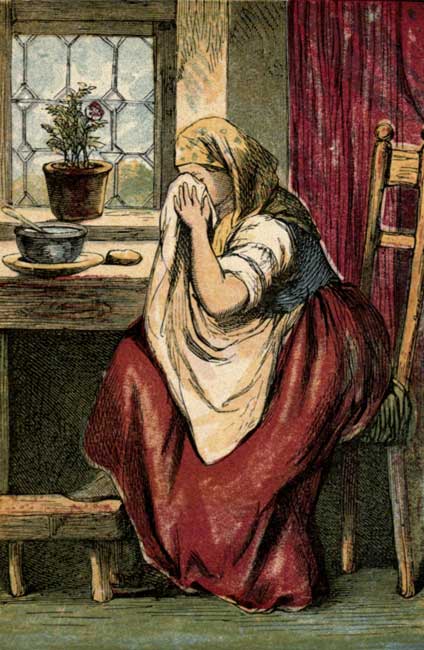 So about an hour or two afterwards the woman was much surprised to see standing by the table a very beautiful lady, dressed splendidly, with a glittering star on her forehead and a wand in her right hand, with a gem of great brilliancy at the top of it. But what delighted the woman most of all was a tiny cradle, made of a walnut shell, lined with velvet, in which lay the prettiest baby ever seen, but it was only just as large as a man’s thumb. “See,” said the fairy, “your wish is granted. Here is a baby for you. Take care of it; it is your own.” The woman did not know how to thank the fairy enough; she was so delighted, and the queen went away quite pleased at having given so much happiness. 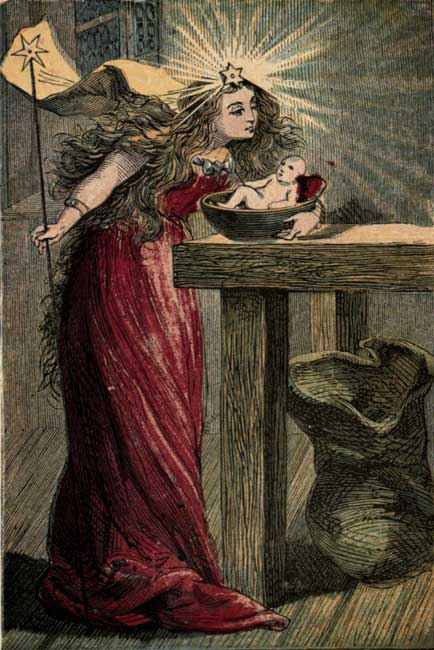 Before the fairy went away, however, she gave the woman a little shirt of spider’s web and a doublet of thistle-down for the baby.

When the farmer came home he was very much pleased. He invited all his friends to the christening, and the child was named “Tom,” after him, and “Thumb,” because he was no bigger than one.

The baby was very well, and merry, and grew, of course; but still it was very small.

However, at last Tom thought himself quite a great boy, and begged his mother to make him a little suit of clothes, and she made him one; but with a great deal of trouble, they were so small.

Tom was very often in mischief. He was so small that his mother used to put him on the table to play; and once she found him in the salt-box. 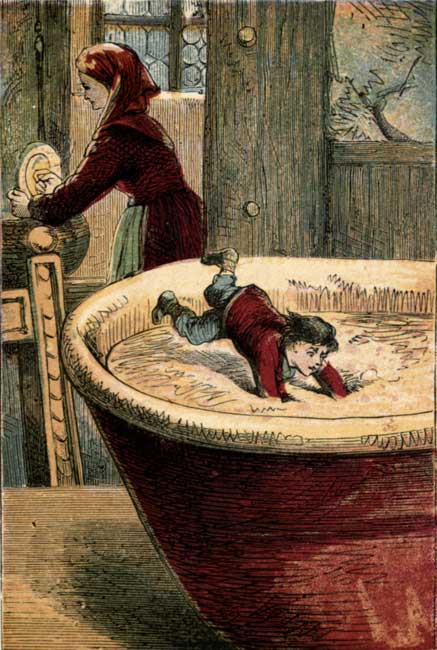 One day she was making a plum-pudding, and Tom stood by the side of the basin, and peeped over the edge; but he could not see into it very well, and while his mother was gone for some more flour, he drew himself up on the edge of the basin. Alas! he fell in and disappeared in the wet pudding, which for poor Tom was a huge morass.

Tom would have cried out, but the pudding stuck his lips together, and his mother not missing him, stirred him up in the mixture, and put it and him into the pot. Tom no sooner felt the hot water than he danced about like mad; the woman was nearly frightened out of her wits to see the pudding come out of the pot and jump about, and she was glad to give it to a tinker who was passing that way. The tinker took the pudding and put it into a cloth, to carry it home to his family, who seldom tasted such a good dish.

But by-and-by, as he was climbing over a stile, he happened to squeeze it, and Tom, who had made quite an arch over his own head in the dry pudding by this time, cried out from the middle of it, “Hallo, Pickens!” which so terrified the tinker that he let the pudding drop in the field and scampered off as fast as he could. The pudding fell to pieces in the fall, and Tom, creeping out, went home to his mother, whom he found in great trouble, because she could not find him. 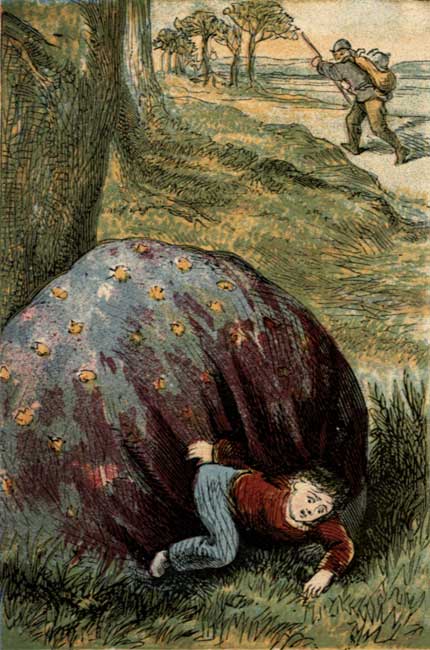 After this accident, Tom’s mother never let him stay near her while she was cooking, but she was obliged to take him with her when she went out milking, for she dared not trust the little man in the house alone.

A few days after his escape from the pudding, Tom went, with his mother, into the fields to milk the cows, and for fear he should be blown away by the wind, she tied him to a thistle with a small piece of thread. 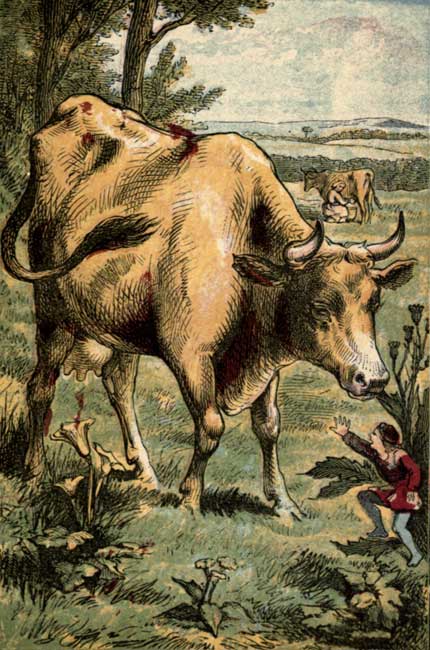 Very soon after, a cow eat up the thistle and swallowed Tom Thumb. His mother was in sad grief again; but Tom scratched and kicked in the cow’s throat till she was glad to throw him out of her mouth again, and he was not at all hurt; but his mother became very anxious about her small son, who now gave her a great deal of trouble. Sometimes he fell into the milk-pail and was nearly drowned in the milk; once he was nearly killed by an angry chicken, and another time had a narrow escape from a cat.

One day Tom went ploughing with his father, who gave him a whip made of a barley straw, to drive the oxen with; but an eagle, flying by, caught him up in his beak, and carried him to the top of a great giant’s castle, and dropped him on the leads. The giant was walking on the battlements and thought at first that it was a foreign bird which lay at his feet, but soon seeing that it was a small man, he picked Tom up with his finger and thumb, and put the poor little creature into his great mouth, but the little boy scratched the roof of the giant’s mouth, and bit his great tongue, and held on by his teeth till the ogre, in a passion, took him out again and threw him over into the sea, which ran beneath the castle walls. Here a very large fish swallowed him up directly. 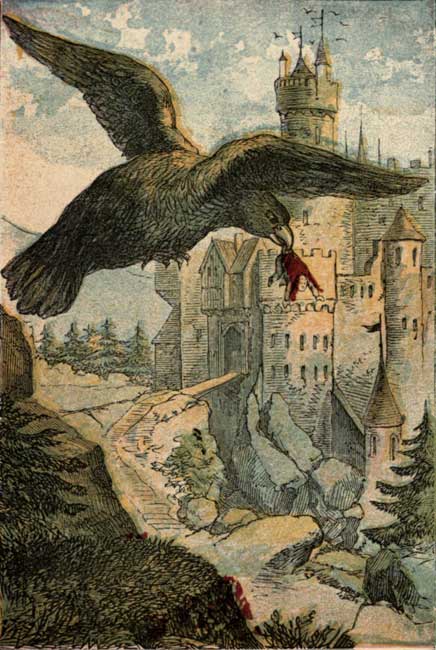 Tom did not at all like swimming about in the fish, but by-and-by he felt it drawn upwards, and guessed at once that it was caught. And so it was; and being a very large fish, the fisherman thought it would make a good present for his beloved King Arthur. So he took it to the palace and begged the king to accept it.

King Arthur was pleased with the poor man’s affection, and ordered the fish to be carried to the kitchen and cooked for his own dinner. The fisherman took it to the cook, who admired it very much, but said it was very heavy. Then he laid it on a table and began to cut it open. You may imagine how he jumped with fear and wonder when Tom Thumb slipped out of the fish!

The cook’s cries brought the other servants, and soon everybody near ran to behold this wonder—the tiny man who came out of the fish.

Tom begged for some water to wash himself, and when he was clean, the courtiers thought him so pretty and such a marvel that they ran to tell the king about him. 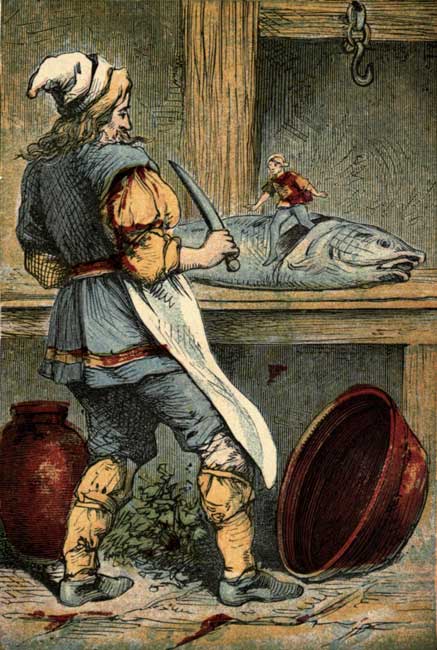 Arthur was very much surprised; but he desired them to send the little man up after dinner to see him, and the Court tailor made haste at once to get ready a Court suit for Tom, which did not take him long to make; there were so few stitches in it! 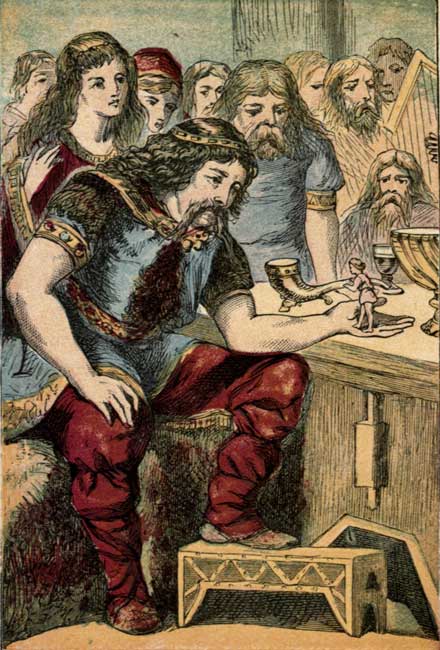 As soon as the king’s great punch-bowl was set on the royal table, Tom Thumb was carried to see the monarch, who was delighted with the little man. Tom walked on the King’s hand, and danced on the Queen’s. He became a great favourite with Arthur, who made him a knight. Such is the wonderful history of Tom Thumb, who did much good when he grew older, and thus proved that however small people are, they may be of use in the world. He was good and kind to his parents, and to everybody; and the old ballad says,—

“Such were his deeds and noble acts
In Arthur’s court there shone,
As like in all the world beside
Was hardly seen or known.”

If you were the size of Tom Thumb…

1. What naughty things could you do?

2. What good things could you do?

3. What do you think you would have to be careful of?

4. What fun could you have?

We All Fit Together

The Tale of Samuel Whiskers