And so the big ‘hole search’ began. They peered between the roots of the trees. Hob even scrabbled down the one and only rabbit hole they found. He came out filthy, covered with clods of damp soil, and said, “Not long dark hole.”

“Perhaps the hole is not down. Perhaps it’s up.” Jacob stroked his chin. “Hob said he fell, so he must have fallen from somewhere higher up, you fall down − don’t you?”

“Good thinking,” agreed Jerry and they began peering up into the branches of nearby trees.

“Where is he?” Jacob looked around. “It’s his problem. You’d think he’d help.”

The twins stared in surprise as they spotted Hob in a pretty grassy clearing tearing up wild flowers, jumping up and down and stamping on them, all the while singing very tunelessly, Ha ha ha, there you go, that’s the end, hee hee hee.

“Hob!” shouted Jerry. “You are supposed to be helping us.”

Hob stopped flower-mangling and ran into the brambles, yelling, “Little mouse, little mouse, I am the fastest.”

“Why are we bothering? Hope he doesn’t catch that mouse,” Jacob grumbled.

“Because we want him to go back where he belongs.” Jerry was thoughtful. “He can’t stay here, this is not goblin territory and, if he stays longer, how can we explain him to Gran?”

When Hob came back out of the brambles even dirtier, he flopped down on the ground and began to writhe in agony.

“I shall die, Hob shall die. It is so terrible.” The goblin’s voice trembled and he rolled over and over clutching at his belly.

“What’s the matter now?” Jacob frowned as they knelt next to the rolling, smelly Hob.

“It is the terrible hunger, I shall die!” The goblin continued to clutch himself, writhing.

“But you scoffed everything in the cool box!” Jerry raised his eyebrows. “Everything, Hob, every single crumb.”

The twins agreed all this wailing and rolling could not go on. They promised him a huge meal if he shut up and followed them back to the shed.

“Now, don’t move out of that hammock, or you get nothing to eat, do you understand? Nothing! Nowt, or whatever you say in GoblinLand.”

Jerry raised a finger at the goblin who was now rolling round in the hammock.

The twins shut the shed door and marched up the garden path to the house. Gran was in the kitchen.

“It’s only eleven and you had half a dozen croissants for breakfast.”

Jacob said at once, “We’ve been tracking in the woods, makes you hungry, Gran.”

“Alright then, but I’m making spaghetti for lunch, so go easy on the sandwiches.” Gran turned her back and was busy sorting out her cupboards. The twins shoved as much bread, tomatoes and cheese as they could into their pockets.

Then Jacob carefully buttered a few slices of bread to make peanut butter sandwiches, making a fuss of showing Gran they hadn’t made too many.

“Oh Jerry, put these old pasta packets in the bin, will you? They are all past the sell-by date, so just throw them away for me, there’s a good lad.”

Gran smiled and handed him the old pasta boxes, adding, “Make sure the bin lid is closed. Mr Roper thinks we’ve got a fox at the back of the gardens, says he can smell it.”

“Will do, Gran.” Jerry grinned, then winked at his brother.

“So, spaghetti at one. You’ll eat up here in the kitchen, though. There’s a very strange smell in that shed, it’s probably the drains, or maybe a fox.” Gran frowned.

“Skunk, more like, and we’re stuck with it.” Jacob hissed under his breath.

As Gran turned to watch them go, Jerry hoped she didn’t notice their bulging pockets.

“Great,” said Jacob as they carried the boxes away, “if all else fails, we can stuff him with old pasta. Maybe that’ll keep him quiet.”

The boys were not surprised to find that the Goblin had made a new mess and that he’d also ripped up all Gran’s flowers around the shed. 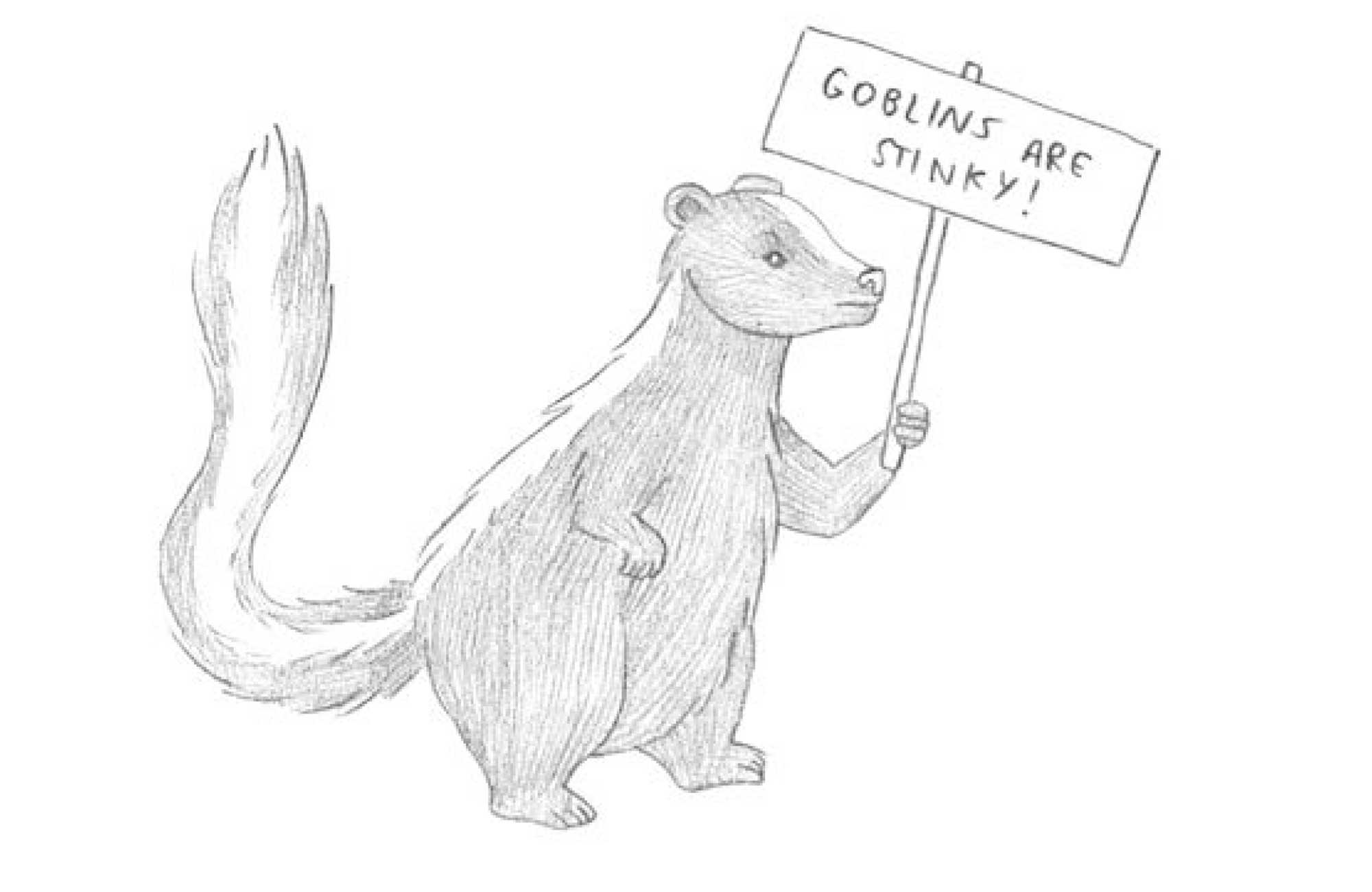