Lilly, Libby, Scarlett and George begged to finish Trick-or-Treating on their own, in their street.

Lilly the green witch with spiders and a pointy hat, Libby the vampire with scary teeth and a blood red cape, Scarlett the pumpkin, her face bright orange, and George the white creepy ghost with a ripped bedsheet.

Mom said yes. All the neighbors wanted to see their costumes, and most of them had plenty of treats…

“Just our neighbors in our street, though. I’ll get the hotdogs ready, so don’t be too long…” Mom called.

And the four children went off to see what their neighbors had ready for them.

The last house was Mrs. Simms, and she had plenty. As they left, George looked along to the end of their road.

“Why not try the old house at the edge of the wood? It’s creepy enough for Halloween.”

“A waste of time. Nobody lives there… it has been empty for years…” Libby shook her Vampire head.

Ghostly George didn’t give up. “But tonight, I can see a light in the front window. Maybe somebody moved in.”

The four children all looked down the road to the big dark old house just outside the little wood at the end of their road.

Lilly squinted. “Yes, there is a light in the window.” She laughed. “OK George, we’ll give the new people a little ‘Halloween welcome’ to our street…”

Why did they feel a bit nervous as they opened the old iron gate, the gate creaked, and they almost turned back?

Sure enough, there was a light – a candle in a dirty jam jar, in the dusty old downstairs window.

“Just moved in… Maybe the electricity isn’t on yet…” Scarlett sounded braver than she felt.

The four Trick-or-Treaters stood close together at the front door. There was no bell, just a rusty old knocker covered in spiderwebs.

Lilly knocked, the sound was hollow and scary.

A face appeared at the window. A thin old lady with straggly white hair. The candle in the jar made her look a little yellow, and very old.

“Happy Halloween,” the children mumbled, in voices that now were no longer so sure that this was a good idea.

But the old lady smiled a crooked smile and asked,

“Who are you? Tell me your names…”

The children were polite and told their names. Wishing the old lady a Happy Halloween, all they wanted to do was to run. Apart from the pale-yellow candle in the window, all around was pitch black. The trees in the garden looked twisted and strange, and the house even older and more broken down than it seemed from the street…

“I have something for you children.” The old lady spoke slowly, and the candle flickered.

Lilly and Libby were holding hands tight. Scarlett and George were gripping each other’s elbows.

“I have so many apple trees in my garden,” the old lady smiled. But it seemed kind of twisted in the candle light.

“Today, I picked a basketful of the best and freshest apples…” Her eyes fixed on each one of the children; her eyes looked right through them. “I hoped some children might come to visit me.” 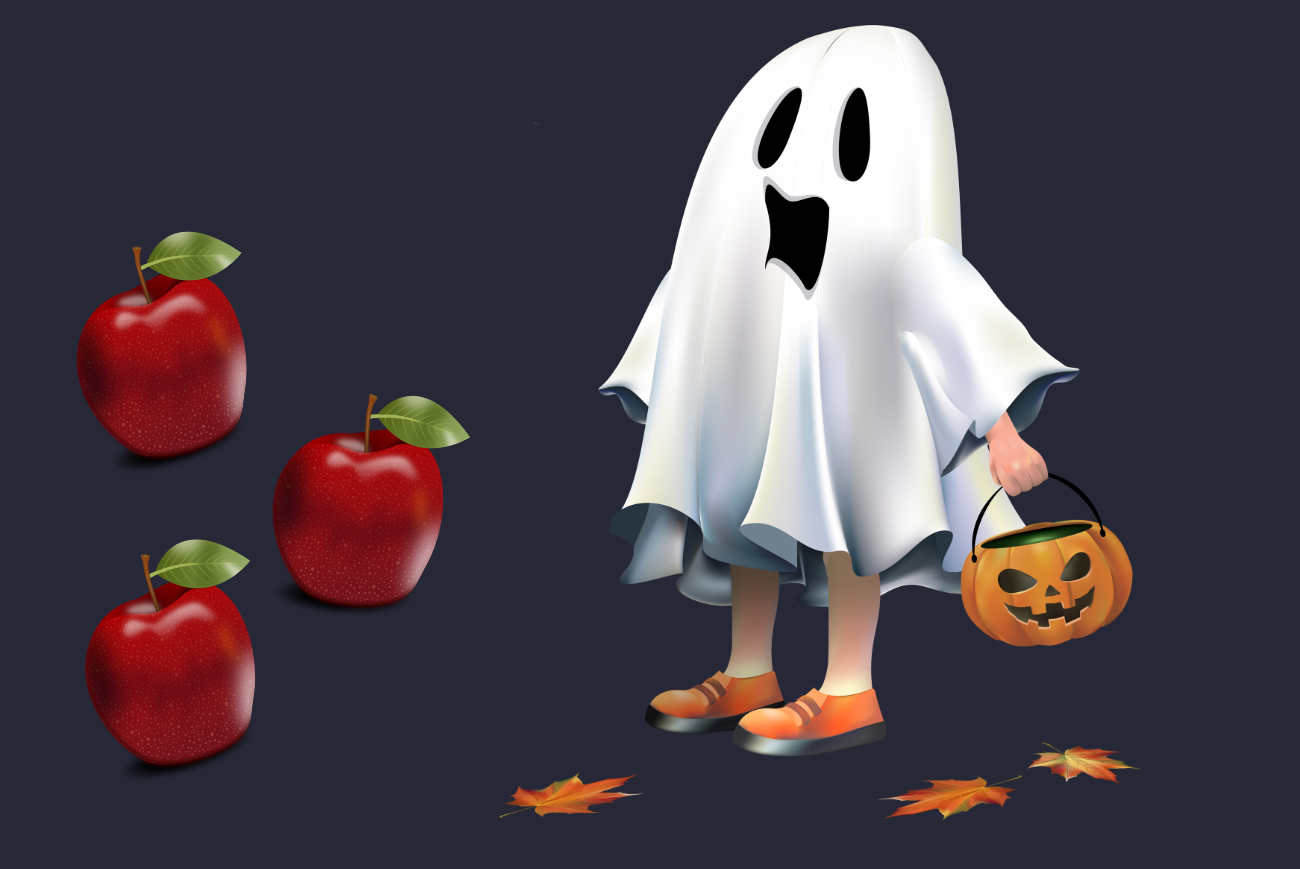 The children nodded. “Thank you very much…” Libby managed to squeak.

“In front of the door.” The old lady lifted a bony finger, and pointed out of the window.

“Yes, thank you, it’s very kind of you…” Scarlett hardly knew what she was saying. She just wanted to grab that basket and run.

“We’ll bring back the basket, we promise,” George added, but the other three glared at him.

Lilly spotted the basket, quite near her feet on the stone doorstep, where they had just knocked. She hadn’t noticed it before.

“Funny we didn’t see them before,” she mumbled, as she picked up the basket of apples, and the four children turned and ran for the gate.

Only George turned around for a moment – the house was dark again; the candle had gone out.

Back home, Lilly quickly dumped the basket of apples on the kitchen table, then the children went to the counter for the delicious smelling hot-dogs.

“I hope you got plenty of treats,” Mum smiled.

“And the old lady in the big house at the end of the road gave us a basket of apples…” George told her.

“But nobody lives in that old house. It has been empty for years…” Mom shook her head, and they went out onto the patio to toast marshmallows on a small fire and share out their candy.

The next morning Mom called the children for breakfast.

“What on earth were you thinking, leaving that basket of apples on the table…”

“Why?” Lilly looked hard at the basket.

“Those apples are rotten…” Mum pointed at the basket. “Full of worms, and they look pretty rotten. The basket crumbles as soon as you even touch it, it’s so old…”

“But it wasn’t like that last night,” George frowned. “The apples looked fresh; red and green…”

George stared at the basket. The apples were brown and rotting, moldy with worms and maggots crawling all over, flies buzzing…

“They stink.” Libby held her nose.

“In the bin.” Mum scooped up the basket and threw it away.

“How did that happen?” Scarlett wondered. “Last night they seemed OK”

George couldn’t let it go. “I have to find out. You can come if you like…”

He walked to the end of the road. The others followed behind him.

A man with a yellow hard hat leaned over the fence.

“That sign has been there for weeks. Those walls are dangerous, the stones are unsafe…”

“And what about the old lady who lives here?” George asked.

“Nobody lives here, little boy.” The man picked up his electric saw and switched it on with a buzz. “We are here to chop down all those old bent and broken old apple trees. They are dangerous and rotten, too. You won’t find any apples in this garden…”

George sniffed, and wondered why he could smell the sweet fruity smell of fresh apples…..

1. Have you ever had something spooky happen to you that you couldn’t explain? Tell a scary story about it, this Halloween!

Illustrations from Pixabay and Rawpixel.

Jack and the Beanstalk

Tails In A Tangle