The Glugs still live in the land of Gosh,
Under the rule of the great King Splosh.
And they climb the trees in the Summer and Spring,
Because it is reckoned the regular thing.
Down in the valley they live their lives,
Taking the air with their aunts and wives.
And they climb the trees in the Winter and Fall,
And count it improper to climb not at all. 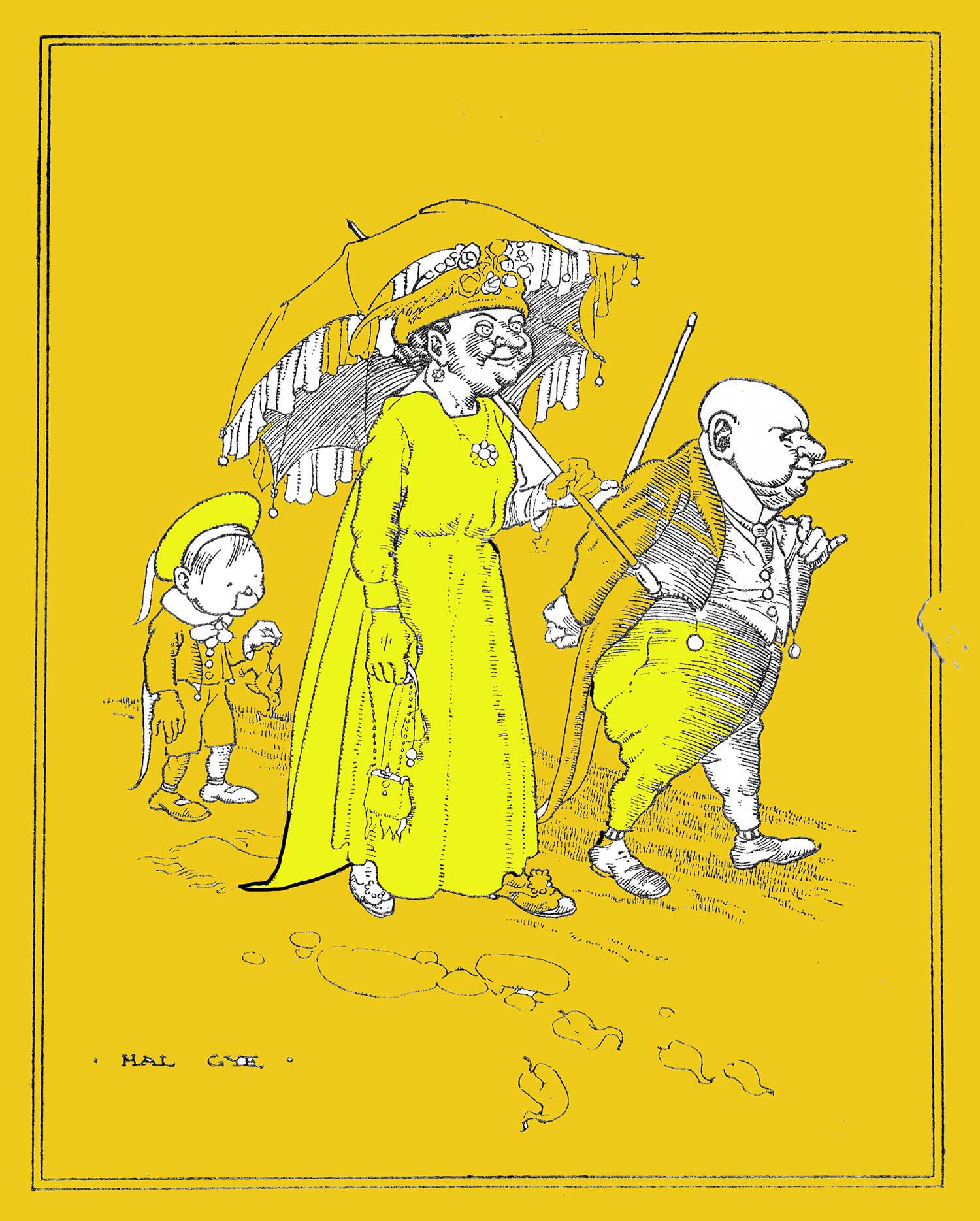 And they name their trees with a thousand names,
Calling them after their Arts and Aims;
And some, they climb for the fun of the thing,
But most go up at the call of the King.
Some scale a tree that they fear to name,
For it bears great blossoms of scarlet shame.
But they eat of the fruit of the nameless tree,
Because they are Glugs, and their choice is free.

But every eve, when the sun goes West,
Over the mountain they call The Blest,
Whose summit looks down on the city of Gosh,
Far from the reach of the great King Splosh,
The Glugs gaze up at the heights above,
And feel vague promptings to wondrous love.
And they whisper a tale of a tinker man,
Who lives in the mount with his Emily Ann.

A great mother mountain, and kindly is she,
Who nurses young rivers and sends them to sea.
And, nestled high up on her sheltering lap,
Is a little red house with a little straw cap
That bears a blue feather of smoke, curling high,
And a bunch of red roses cocked over one eye.
And the eyes of it glisten and shine in the sun,
As they look down on Gosh with a twinkle of fun.

There’s a gay little garden, a tidy white gate,
And a narrow brown pathway that will not run straight;
For it turns and it twists and it wanders about
To the left and the right, as in humorous doubt.
‘Tis a humorous path, and a joke from its birth
Till it ends at the door with a wriggle of mirth.
And here in the mount lives the queer tinker man
With his little red dog and his Emily Arm.

And, once in a while, when the weather is clear,
When the work is all over, and even is near,
They walk in the garden and gaze down below
On the Valley of Gosh, where the young rivers go;
Where the houses of Gosh seem so paltry and vain,
Like a handful of pebbles strewn over the plain;
Where tiny black forms crawl about in the vale,
And stare at the mountain they fear them to scale.

And Sym sits him down by his little wife’s knee,
With his feet in the grass and his back to a tree;
And he looks on the Valley and dreams of old years,
As he strokes his red dog with the funny prick ears.
And he says, “Still they climb in their whimsical way,
While we stand on earth, yet are higher than they.
Oh, who trusts to a tree is a fool of a man!
For the wise seek the mountains, my Emily Ann.”

So lives the queer tinker, nor deems it a wrong,
When the spirit so moves him, to burst into song.
‘Tis a comical song about kettles and pans,
And the graces and charms that are Emily Ann’s.
‘Tis a mad, freakish song, but he sings it with zest,
And his little wife vows it of all songs the best.
And he sings quite a lot, as the Summer days pass,
With his back to a tree and his feet in the grass.

And the little red dog, who is wise as dogs go,
He will hark to that song for a minute or so,
‘With his head on one side, and a serious air.
Then he makes no remark; but he wanders elsewhere.
And he trots down the garden to gaze now and then
At the curious pranks of a certain blue wren:
Not a commonplace wren, but a bird marked for fame
Thro’ a grievance in life and a definite aim.

Now, they never fly far and they never fly high,
And they probably couldn’t, suppose they should try.
So the common blue wren is content with his lot:
He will eat when there’s food, and he fasts when there’s not.
He flirts and he flutters, his wife by his side,
With his share of content and forgiveable pride.
And he keeps to the earth, ‘mid the bushes and shrubs,
And he dines very well upon corpulent grubs.

But the little blue wren with a grievance in life,
He was rude to his neighbours and short with his wife.
For, up in the apple-tree over his nest,
There dwelt a fat spider who gave him no rest:
A spider so fat, so abnormally stout
That he seemed hardly fitted to waddle about.
But his eyes were so sharp, and his legs were so spry,
That he could not be caught; and ’twas folly to try.

Said the wren, as his loud lamentations he hurled
At the little red dog, “It’s a rotten old world!
But my heart would be glad, and my life would be blest
If I had that fat spider well under my vest.
Then I’d call back my youth, and be seeking to live,
And to taste of the pleasures the world has to give.
But the world is all wrong, and my mind’s in a fog!”
“Aw, don’t be a Glug!” said the little red dog.

Then, up from the grass, where he sat by his tree,
The voice of the Tinker rose fearless and free.

The little dog listened, his head on one side;
Then sought him a spot where a bored dog could hide.

“Kettles and pans! Ho, kettles and pans!
The stars are the gods’ but the earth, it is man’s!
Yet down in the shadow dull mortals there are
Who climb in the tree-tops to snatch at a star:
Seeking content and a surcease of care,
Finding but emptiness everywhere.
Then make for the mountain, importunate man!
With a kettle to mend . . . and your Emily Ann.

As he cocked a sad eye o’er a sheltering log,
“Oh, a Glug is a Glug!” sighed the little red dog.

1. For most of the poem, the Glugs of Gosh, whenever they don’t know what to do, ask what their grandfathers did. Do you think this is a good way to solve problems? Why or why not?

2. What in the poem made the Glugs change their mind about the way they made their decisions?