Now Joi, the rebel, he had a son
In far, far Gosh where the tall trees wave.
Said Joi: “In Gosh there shall yet be one
To scorn this life of a self-made slave;
To spurn the law of the Knight, Sir Stodge,
And end the rule of the great King Splosh;
Who shall warn the Glugs of their crafty dodge,
And at last bring peace, sweet peace, to Gosh.”

Said he: “Whenever the kind sun showers
His golden treasure on grateful flowers,
With upturned faces and hearts bowed low,
The Glugs shall know what the wild things know.”
Said he: “Wherever the broad fields smile,
They shall walk with clean minds, free of guile;
They shall scoff aloud at the call of Greed,
And turn to their labours and never heed.”

So Joi had a son, and his name was Sym;
And his eyes were wide as the eyes of Truth;
And there came to the wondering mind of him
Long thoughts of the riddle that vexes youth.
And, “Father,” he said, “in the mart’s loud din
Is there aught of pleasure? Do some find joy?”
But his father tilted the beardless chin,
And looked in the eyes of the questing boy.

Said he: “Whenever the fields are green,
Lie still, where the wild rose fashions a screen,
While the brown thrush calls to his love-wise mate,
And know what they profit who trade with Hate.”
Said he: “Whenever the great skies spread,
In the beckoning vastness overhead,
A tent for the blue wren building a nest,
Then, down in the heart of you, learn what’s best.”

And there came to Sym as he walked afield
Deep thoughts of the world and the folk of Gosh.
He saw the idols to which they kneeled;
He marked them cringe to the name of Splosli.
Is it meet,” he asked, “that a soul should crawl
To a purple robe or a gilded chair?”
But his father walked to the garden’s wall
And stooped to a rose-bush flowering there.

Said he: “Whenever a bursting bloom
Looks up to the sun, may a soul find room
For a measure of awe at the wondrous birth
Of one more treasure to this glad earth.”
Said he: “Whenever a dewdrop clings
To a gossamer thread, and glitters and swings,
Deep in humility bow your head
To a thing for a blundering mortal’s dread.”

And there came to Sym in his later youth,
With the first clear glance in the face of guile,
Thirst for knowledge and thoughts of truth,
Of gilded baubles, and things worth while.
And he said, “There is much that a Glug should know;
But his mind is clouded, his years are few.”
Then Joi, the father, he answered low
As his thoughts ran back to the youth he knew.

Said he: “Whenever the West wind stirs,
And birds in feathers and beasts in furs
Steal out to dance in the glade, lie still:
Let your heart teach you what it will.”
Said he: “Whenever the moonlight creeps
Thro’ inlaced boughs, and a shy star peeps
Adown from its crib in the cradling sky,
Know of their folly who fear to die.”

New interest came to the mind of Sym,
As ‘midst his fellows he lived and toiled.
But the ways of the Glug folk puzzled him;
For some won honour, while some were foiled;
Yet all were filled with a vague unrest
As they climbed their trees in an endless search.
But Joi, the father, he mocked their quest,
When he marked a Glug on his hard-won perch.

Said he: “Whenever these tales are heard
Of the Feasible Dog or the Guffer Bird,
Then laugh and laugh till the fat tears roll
To the roots of the joy-bush deep in your soul.
When you see them squat on the tree-tops high,
Scanning for ever that heedless sky,
Lie flat on your back on the good, green earth
And roar till the great vault echoes your mirth.”

As he walked in the city, to Sym there came
Sounds envenomed with fear and hate,
Shouts of anger and words of shame,
As Glug blamed Glug for his woeful state.
“This blame?” said Sym, “Is it mortal’s right
To blame his fellow for aught he be?”
But the father said, “Do we blame the night
When darkness gathers and none can see?” 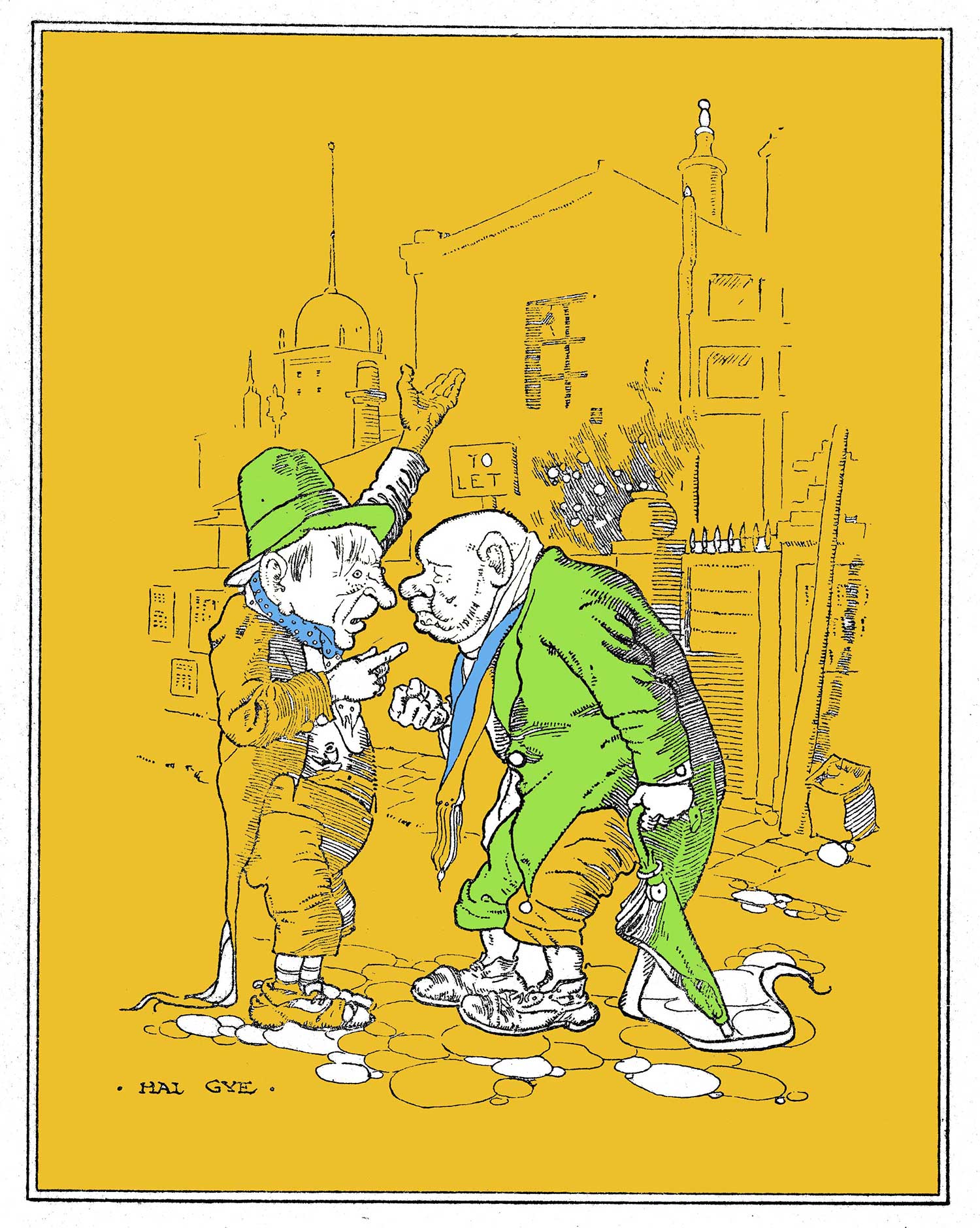 Said he: “Whenever there springs from earth
A plant all crooked and marred at birth,
Shall we, unlearned in the Gardener’s scheme,
Blame plant or earth for the faults that seem?”
Said he: “Whenever your wondering eyes
Look out on the glory of earth and skies,
Shall you, ‘mid the blessing of fields a-bloom,
Fling blame at the blind man, prisoned in gloom?”

So Joi had a son, and his name was Sym;
Far from the ken of the great King Splosh.
And small was the Glugs’ regard of him,
Mooning along in the streets of Gosh.
But many a creature by field and ford
Shared in the schooling of that strange boy,
Dreaming and planning to gather and hoard
Knowledge of all things precious to Joi.