V. THE GROWTH OF SYM

Now Sym was a Glug; and ’tis mentioned so
That the tale reads perfectly plain as we go.
In his veins ran blood of that stupid race
Of docile folk, who inhabit the place
Called Gosh, sad Gosh, where the tall trees sigh
With a strange, significant sort of cry
When the gloaming creeps and the wind is high.

When the deep shades creep and the wind is high
The trees bow low as the gods ride by:
Gods of the gloaming, who ride on the breeze,
Stooping to heaften the birds and the trees.
But each dull Glug sits down by his door,
And mutters, ” ‘Tis windy!” and nothing more,
Like the long-dead Glugs in the days of yore.

When Sym was born there was much to-do,
And his parents thought him a joy to view;
But folk not prejudiced saw the Glug,
As his nurse remarked, “In the cut of his mug.”
For he had their hair, and he had their eyes,
And the Glug expression of pained surprise,
And their predilection for pumpkin pies.

And his parents’ claims were a deal denied
By his maiden aunt on his mother’s side,
A tall Glug lady of fifty-two
With a slight moustache of an auburn hue.
“Parental blither!” she said quite flat.
“He’s an average Glug; and he’s red and fat!
And exceedingly fat and red at that!”

But the father, Joi, when he gazed on Sym,
Dreamed great and wonderful things for him.
Said he, “If the mind of a Glug could wake
Then, Oh, what a wonderful Glug he’d make!
We shall teach this laddie to play life’s game
With a different mind and a definite aim:
A Glug in appearance, yet not the same.”

But the practical aunt said, “Fudge! You fool!
We’ll pack up his dinner and send him to school.
He shall learn about two-times and parsing and capes,
And how to make money with inches on tapes.
We’ll apprentice him then to the drapery trade,
Where, I’ve heard it reported, large profits are made;
Besides, he can sell us cheap buttons and braid.”

So poor young Sym, he was sent to school,
Where the first thing taught is the Golden Rule.
“Do unto others,” the teacher said . . .
Then suddenly stopped and scratched his head.
“You may look up the rest in a book,” said he.
“At present it doesn’t occur to me;
But do it, whatever it happens to be.”

“And now,” said the teacher, “the day’s task brings
Consideration of practical things.
If a man makes a profit of fifteen pounds
On one week’s takings from two milk rounds,
How many . . .” And Sym went dreaming away
To the sunlit lands where the field-mice play,
And wrens hold revel the livelong day. 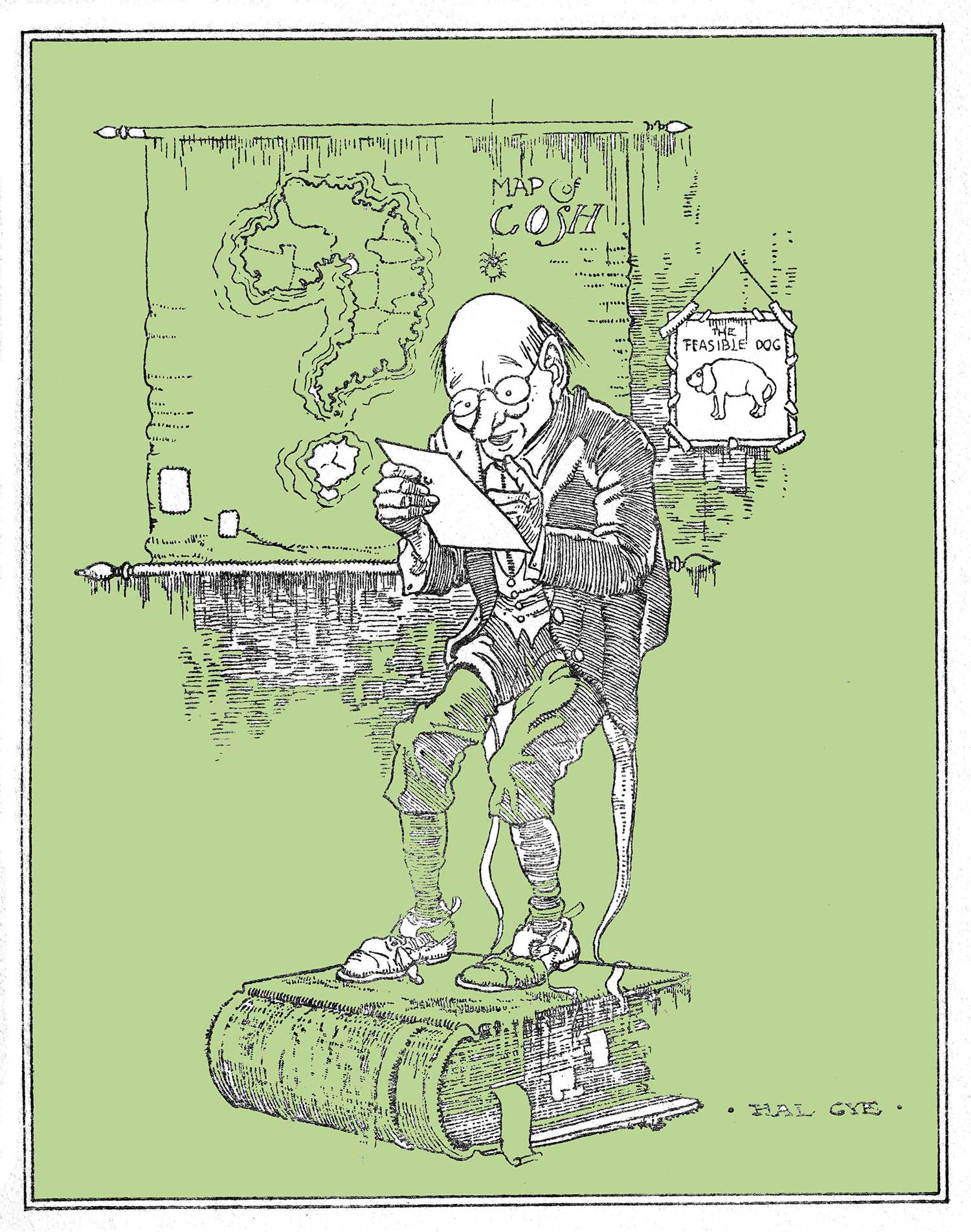 He walked in the welcoming fields alone,
While from far, far away came the pedagogue’s drone:
“If a man makes . . .Multiply . . . Abstract nouns . . .
From B take . . .Population of towns . . .
Rods, poles or perches . . . Derived from Greek
Oh, the hawthorn buds came out this week,
And robins are nesting down by the creek.

So Sym was head of his class not once;
And his aunt repeatedly dubbed him “Dunce.”
But, “Give him a chance,” said his father, Joi.
“His head is abnormally large for a boy.”
But his aunt said, “Piffie! It’s crammed with bosh!
Why, he don’t know the rivers and mountains of Gosh,
Nor the names of the nephews of good King Splosh!”

In Gosh, when a youth gets an obstinate look,
And copies his washing-bill into a book,
And blackens his boot-heels, and frowns at a joke,
“Ah, he’s getting sense,” say the elderly folk.
But Sym, he would laugh when he ought to be sad;
Said his aunt, “Lawk-a-mussy! What’s wrong with the lad?
He romps with the puppies, and talks to the ants,
And keeps his loose change in his second-best pants,
And stumbles all over my cauliflower plants!”

“There is wisdom in that,” laughed the father, Joi.
But the aunt said, “Toity!” and, “Drat the boy!”
“He shall play,” said the father, “some noble part.
Who knows but it may be in letters or art?
‘Tis a dignified business to make folk think.”
But the aunt cried, “What! Go messing with ink?
And smear all his fingers, and take to drink?
Paint hussies and cows, and end in the clink?”

So the argument ran; but one bright Spring day
Sym settled it all in his own strange way.
“‘Tis a tramp,” he announced, “I’ve decided to be;
And I start next Monday at twenty to three . . .”
When the aunt recovered she screamed, “A tramp?
A low-lived, pilfering, idle scamp,
Who steals people’s washing, and sleeps in the damp?”

Sharp to the hour Sym was ready and dressed.
“Young birds,” sighed the father, “must go from the nest.
When the green moss covers those stones you tread,
When the green grass whispers above my head,
Mark well, wherever your path may turn,
They have reached the valley of peace who learn
That wise hearts cherish what fools may spurn.”

So Sym went off; and a year ran by,
And the father said, with a smile-masked sigh,
“It is meet that the young should leave the nest.”
Said the aunt, “Don’t spill that soup on your vest!
Nor mention his name! He’s our one disgrace!
And he’s probably sneaking around some place
With fuzzy black whiskers all over his face.”

But, under a hedge, by a flowering peach,
A youth with a little blue wren held speech.
With his back to a tree and his feet in the grass,
He watched the thistle-down drift and pass,
And the cloud-puffs, borne on a lazy breeze,
Move by on their errand, above the trees,
Into the vault of the mysteries.

“Now, teach me, little blue wren,” said he.
“‘Tis you can unravel this riddle for me.
I am ‘mazed by the gifts of this kindly earth.
Which of them all has the greatest worth?”
He flirted his tail as he answered then,
He bobbed and he bowed to his coy little hen:
“Why, sunlight and worms!” said the little blue wren.