Somewhere or other, ’tis doubtful where,
In the archives of Gosh is a volume rare,
A precious old classic that nobody reads,
And nobody asks for, and nobody heeds;
Which makes it a classic, and famed thro’ the land,
As well-informed persons will quite understand.

‘Tis a ponderous work, and ’tis written in prose,
For some mystical reason that nobody knows;
And it tells in a style that is terse and correct
Of the rule of the Swanks and its baneful effect
On the commerce of Gosh, on its morals and trade;
And it quotes a grave prophecy somebody made.

And this is the prophecy, written right bold
On a parchment all tattered and yellow and old;
So old and so tattered that nobody knows
How far into foretime its origin goes.
But this is the writing that set Glugs agog
When ’twas called to their minds by the Mayor of Quog:

Now, the Mayor of Quog, a small suburb of Gosh,
Was intensely annoyed at the act of King Splosh
In asking the Mayor of Piphel to tea
With himself and the Queen on a Thursday at three;
When the King must have known that the sorriest dog,
If a native of Piphel, was hated in Quog.

An act without precedent! Quog was ignored!
The Mayor and Council and Charity Board,
They met and considered this insult to Quog;
And they said, ” ‘Tis the work of the treacherous Og!
‘Tis plain the Og influence threatens the Throne;
And the Swanks are all crazed with this trading in stone.”

Said the Mayor of Quog: “This has long been foretold
In a prophecy penned by the Seer of old.
We must search, if we’d banish the curse of our time,
For a mender of pots who’s a maker of rhyme.
‘Tis to him we must look when our luck goes amiss.
But, Oh, where in all Gosh is a Glug such as this?”

Then the Mayor and Council and Charity Board
O’er the archival prophecy zealously pored,
With a pursing of lips and a shaking of heads,
With a searching and prying for possible threads
That would lead to discover this versatile Glug
Who modelled a rhyme while he mended a mug. 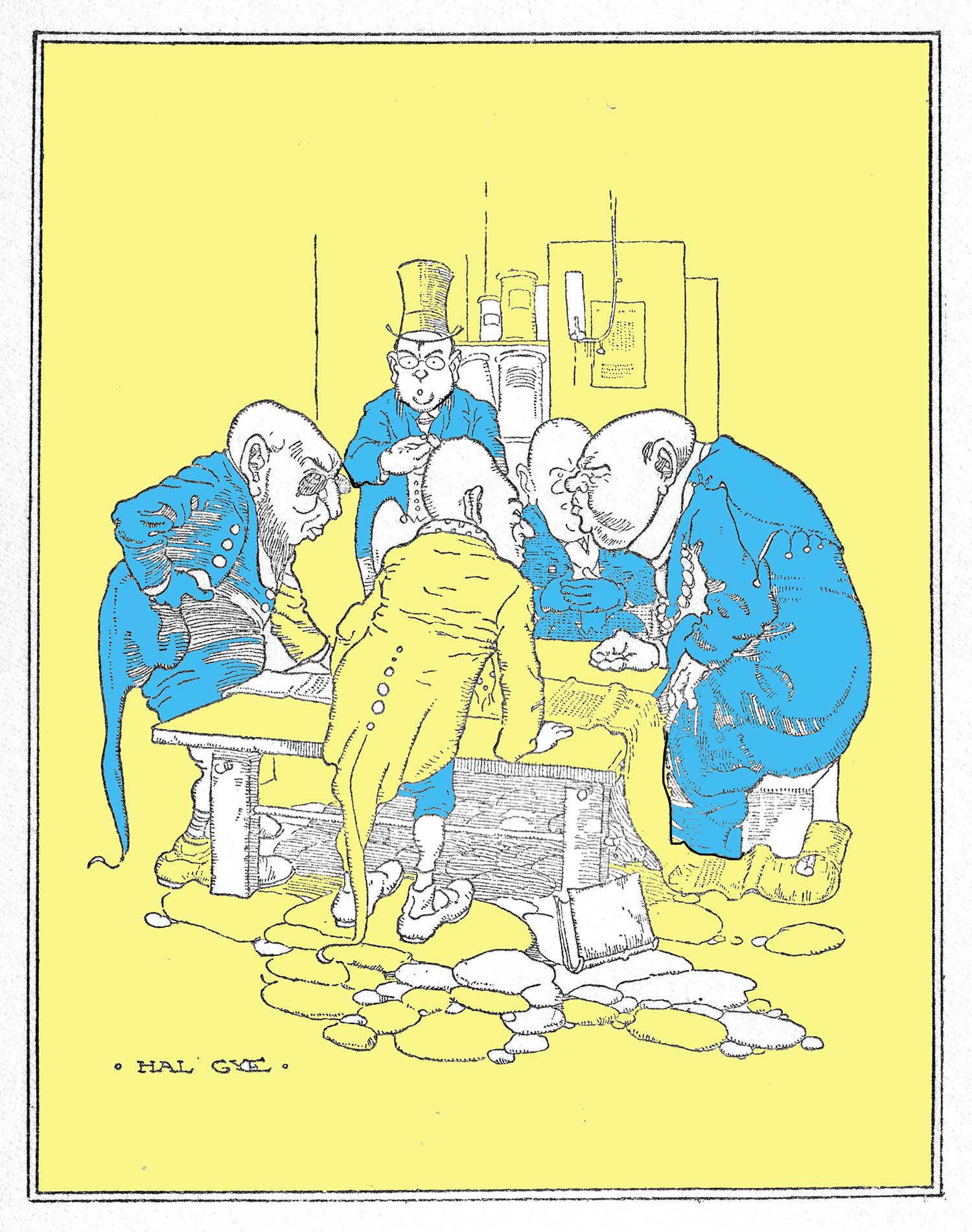 With a pursing of lips and a shaking of heads,
They gave up the task and went home to their beds,
Where each lay awake while he tortured his brain
For a key to the riddle, but ever in vain . . .
Then, lo, at the Mayor’s front door in the morn
A tinker called out, and a Movement was born.

From the mayoral bed with unmayoral cries
The magistrate sprang ere he’d opened his eyes.
“Hold him!” he yelled, as he bounced on the floor.
“Oh, who is this tinker that rhymes at my door?
Go get me the name and the title of him.”
They answered. “Be calm, sir. ‘Tis no one but Sym.

‘Tis Sym, the mad tinker, the son of old Joi,
Who ran from his home when a bit of a boy.
He went for a tramp, tho’ ’tis common belief,
When folk were not looking he went for a thief;
Then went for a tinker, and rhymes as he goes.
Some say he’s crazy, but nobody knows.”

‘Twas thus it began, the exalting of Sym,
And the mad Gluggish struggle that raged around him.
For the good Mayor seized him, and clothed him in silk,
And fed him on pumpkins and pasteurised milk,
And praised him in public, and coupled his name
With Gosh’s vague prophet of archival fame.

The Press interviewed him a great many times,
And printed his portrait, and published his rhymes;
Till the King and Sir Stodge and the Swanks grew afraid
Of his fame ‘mid the Glugs and the trouble it made.
For, wherever Sym went in the city of Gosh,
There were cheers for the tinker, and hoots for King Splosh.

His goings and comings were watched for and cheered;
And a crowd quickly gathered where’er he appeared.
All the folk flocked around him and shouted his praise;
For the Glugs followed fashion, and Sym was a craze.
They sued him for words, which they greeted with cheers,
For the way with a Glug is to tickle his ears.

Sym had a quaint fancy in phrase and in text;
When he’d fed them with one they would howl for the next.
Thus he’d cry, “Love is love” and the welkin they’d lift
With their shouts of surprise at his wonderful gift.
He would say “After life, then a Glug must meet death!”
And they’d clamour for more ere he took the next breath.

But Sym grew aweary of this sort of praise,
And he longed to be back with his out-o’-door days,
With his feet in the grass and his back to a tree,
Rhyming and tinkering, fameless and free.
He said so one day to the Mayor of Quog,
And declared he’d as lief live the life of a dog.

But the Mayor was vexed; for the Movement had grown,
And his dreams had of late soared as high as a throne.
“Have a care! What is written is written,” said he.
“And the dullest Glug knows what is written must be.
‘Tis the prophet of Gosh who has prophesied it;
And ’tis thus that ’tis written by him who so writ:

“‘Lo, the Tinker of Gosh he shall make him three rhymes:
One on the errors and aims of his times,
One on the symptoms of sin that he sees,
And the third and the last on whatever he please.
And when the Glugs hear them and mark what they mean
The land shall be purged and the nation made clean.”‘

So Sym gave a promise to write then and there
Three rhymes to be read in the Great Market Square
To all Glugs assembled on Saturday week.
“And then,” said the Mayor, “if still you must seek
To return to your tramping, well, just have your fling;
But I’ll make you a marquis, or any old thing . . .”
Said Sym, “I shall tinker, and still be a king.” 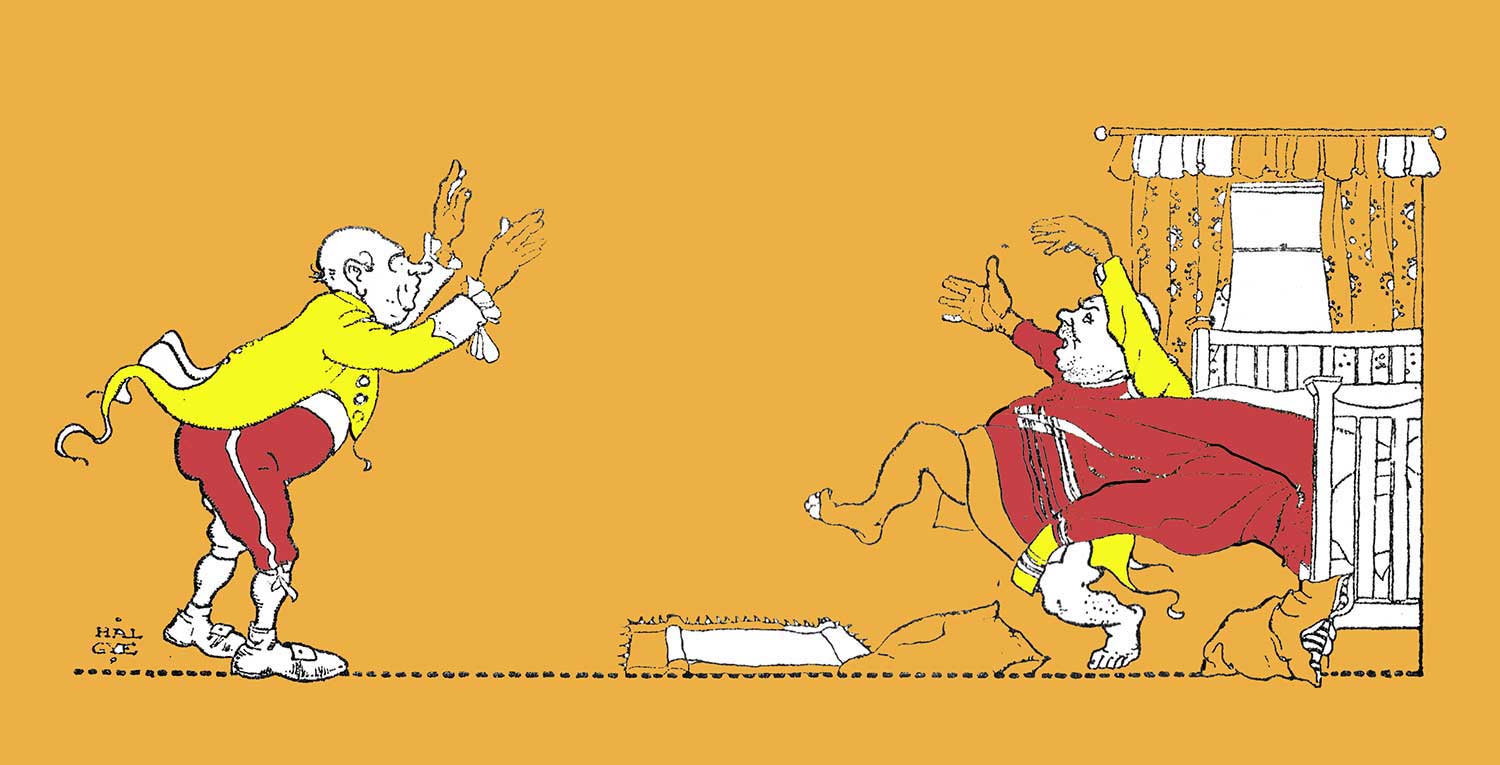