Whether it was after a long time or after a short time matters not, but one day she was sitting by her little window, bathed in tears, when a woman passed by the window. In appearance she was simple and kindly, and she leaned her elbows on her crutch, rested her chin on her hands, and said to the Princess in a wheedling, caressing voice:

“How’s this, darling little Princess, you are forever fretting? Pray come now out of your turret and have a peep at God’s fair world, or come down into your little garden among the sweet green things and drive away your woe!”

For a long time the Princess refused, she did not even care to listen to the woman’s words, but, at last, she thought, “There can be no harm in going into the garden, crossing the brook is another matter.” But she did not know that this woman was a witch, and had come to ruin her because she envied her her bliss.

So the Princess went with her into the garden, and listened to her cunning, wheedling words. And in the garden from beneath the mountain trickled a stream of crystalline water.

“What do you say now,” said the woman, “the day is very hot, the sun is burning with all its might, but this darling little stream is so cold, so refreshing, and hark how it babbles—why should we not have a bath here?”

“Ah, no, no! I won’t,” said the Princess; but she thought to herself, “But why not? There can be no harm in having a bath!” So she slipped off her little sarafan, and bounded into the water, and no sooner had she bathed than the witch struck her on the shoulder and said, “Swim about now as a white duck!” 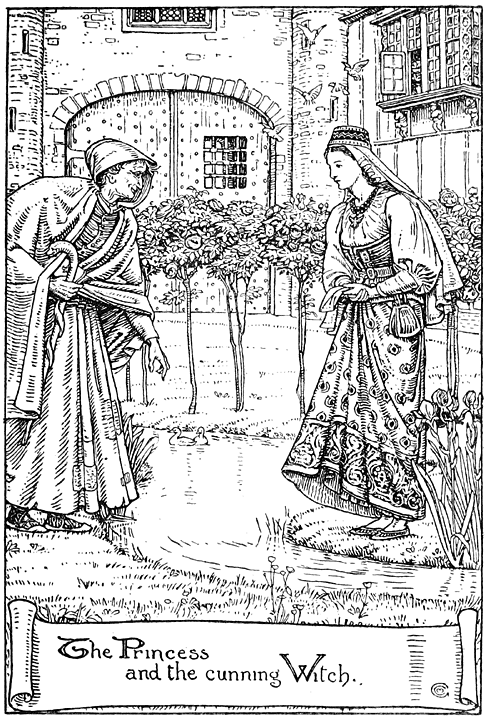 But the witch immediately dressed herself in the Princess’s robes, tied and painted herself, and sat in place of the Princess in the turret to await the Prince.

And as soon as the little dog began to bark and the little bell fell a-tinkling, she rushed out to meet him, threw herself upon his neck, and kissed and fondled him. The Prince was so overjoyed that he was the first to stretch out his arms towards her, and never noticed that it was not his wife, but an evil witch who stood before him.

Meanwhile the poor duck, dwelling in the bright stream, laid eggs and hatched its young; two were fair, but the third was still-born, and her babies grew up into little children. She brought them up, and they began to walk along the stream, and catch gold-fish, and collect bits of rags, and sew them coats, and run up the banks, and look at the meadows. But the mother said: “Oh! don’t go there, my children. There dwells the evil witch. She ruined me, and she will ruin you!”

But the children didn’t listen to their mother, and one day they played in the grass, and the next day they ran after ants, and went further and further, and so got into the Prince’s courtyard.

The witch knew them by instinct, and ground her teeth for rage; but she made herself so nice, called the little children into the out-house, gave them a good feed, and a good drink, and made them lie down to sleep, and bade her people light a fire in the courtyard, and put a kettle on it, and sharpen their knives.

In the night the witch came to their door and said: “Are you asleep, little children, or not?”

Then the still-born one answered instead of his brothers:

“We do not dream in dreams, but think in our thoughts that you want to cut up the whole lot of us!—the pyres of maple-branches are blazing, the kettles are seething, and the knives of steel are sharpening.”

“They are not asleep,” said the witch, and she went away from the door, walked about and walked about, and then went to the door again:

“Are you asleep, children, or are you not?”

And the still-born again screeched from beneath the pillow instead of his brethren:

“We do not dream in dreams, but think in our thoughts that you want to cut up the whole lot of us; the pyres of maple-branches are blazing, the kettles are seething, and the knives of steel are sharpening.”

“How is it that it is always one and the same voice?” thought the witch; “I’ll just have a peep.” She opened the door very, very softly, looked in, and saw both the brothers sleeping soundly. Then she killed the pair of them.

In the morning the white duck began seeking and calling her children, but her darling children did not come to her calling. Her heart had a foreboding of evil. She shuddered and flew off to the Prince’s courtyard. In the Prince’s courtyard, as white as little white kerchiefs, as cold as little cold split fish, lay the brothers all in a row. She flew down, threw herself upon them, fluttered her little wings, flew round and round her little ones, and cried with a mother’s voice:

I brought you up in woe and fears,

I nourished you with grief and tears,

Dark night it brought no sleep to me,

No food was sweet because of ye.”

And the Prince heard the lament, called the witch to him, and said: “Wife, have you heard this thing, this thing unheard of?”

“You imagine it! Hi! My serving-men, drive me this duck out of the courtyard!”

They began driving her out, but she flew round and round, and again said to her children:

The old, old witch your bane hath been,

That cruel snake that lurks unseen;

Your father from you she did take,

Your father dear, my husband true;

Us in the running stream she threw.

She changed us into ducks so white,

And prospers as if wrong were right!”

The Prince felt that there was something wrong here, and he cried:

“Bring me that white duck hither!”

They all hastened to fulfil his command, but the white duck flew round in a circle, and none could catch her. At last the Prince himself went out on the balcony, and she flew upon his hands, and fell at his feet. The Prince took her carefully by her little wing, and said:

“White birch-tree stand behind me, and fair damsel stand before me!”

Then the white duck turned into her former shape of thrice-lovely Princess, taught them how to get a little bladder of living-and-speaking-water in a magpie’s nest, sprinkled her children with the living water, and they shuddered; then she sprinkled them with the speaking water, and they began to speak. And the Prince suddenly saw himself surrounded by his family all alive and well, and they all lived together, and lived happily, and chose good and avoided evil.

But the witch, by the Prince’s command, was fastened to the tail of a horse and dragged away over the open steppe. The fowls of the air picked her flesh, and the wild winds of heaven scattered her bones, and there remained not a trace or a memorial of her behind.