The following story is a sample of the chapter book Rosco the Rascal at the St Patrick’s Day Parade. You can read the first three chapters below.

If you like it, you can find out more about the rest of the story here. 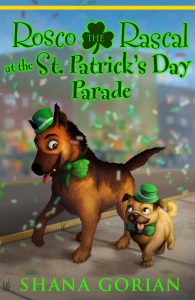 Sparks, a polite young pug, wasn’t sure why this disagreeable dog was barking at him, but he didn’t like it. He hadn’t done a thing to upset him. And he hadn’t come all the way to the big city to march in the St. Patrick’s Day Parade just to be hassled by a bad-tempered pup.

“Arf arf!” Sparks barked back. Sparks tugged on his leash—he wanted to get away from this irritating dog.

Second grader Mandy McKendrick held onto Sparks’ leash tightly, trying to put some distance between Sparks and the unfriendly terrier.

“Oh my goodness!” cried Mandy as Sparks yelped in pain. She squatted down to place a protective hand over Sparks’ head, glaring at the terrier’s owner, who hadn’t been paying attention to his dog. “Excuse me? Can you watch your dog, please? He just bit my dog’s ear!”

Taking the terrier by the collar, the boy began to holler at the dog. “Not again! Bad dog, Jack!”

Mandy reached down to examine Sparks’ ear, loosening her grip on his leash. The ear wasn’t bleeding, but Sparks wasn’t about to wait around for another attack. He tugged on his leash again. This time, it slipped from Mandy’s hands. Sparks broke into a run, leash trailing behind.

“Wait! Sparks, come back here!” Mandy cried, chasing after him.

But Sparks was afraid, and he was quick! Although he was just a little dog, he scurried around long legs and under other leashes faster than Mandy could hope to do. In a few seconds, she had lost sight of him completely.

Mandy wasn’t too surprised that something had already gone wrong today. Things had not been going her way for the last several days. In fact, Mandy’s luck had been downright bad all week. Still, she never thought for a second that it would be this bad—that she’d lose Sparks!

JAMES, WE HAVE A PROBLEM

Sparks was the Bentons’ pet pug. Mr. and Mrs. Benton, a retired couple who had moved in next door to the McKendricks, had generously allowed Sparks to join them for this special occasion, so that Mandy and James would each have a dog to walk in the parade.

The dressed up dogs were always a big favorite of the downtown St. Patrick’s Day Parade crowd, and before the run-in with the nasty terrier, Mandy had been enjoying the festive atmosphere. People had smiled and waved at her, exclaiming at the adorable costumed dogs.

Mandy wore her green Pinch Me, I’m Irish T- shirt. Her long, brown hair was held back with a green ponytail holder, and a headband with sparkly green shamrocks clung to her head.

Mandy’s ten-year-old brother, James, wore a green and white button-up shirt and a goofy top hat. A fifth-grader with red hair and freckles, James was about as Irish-looking as any American-born boy could be. He enjoyed watching the St. Patrick’s Day Parade every year and thought it would be fun to march in it this year. 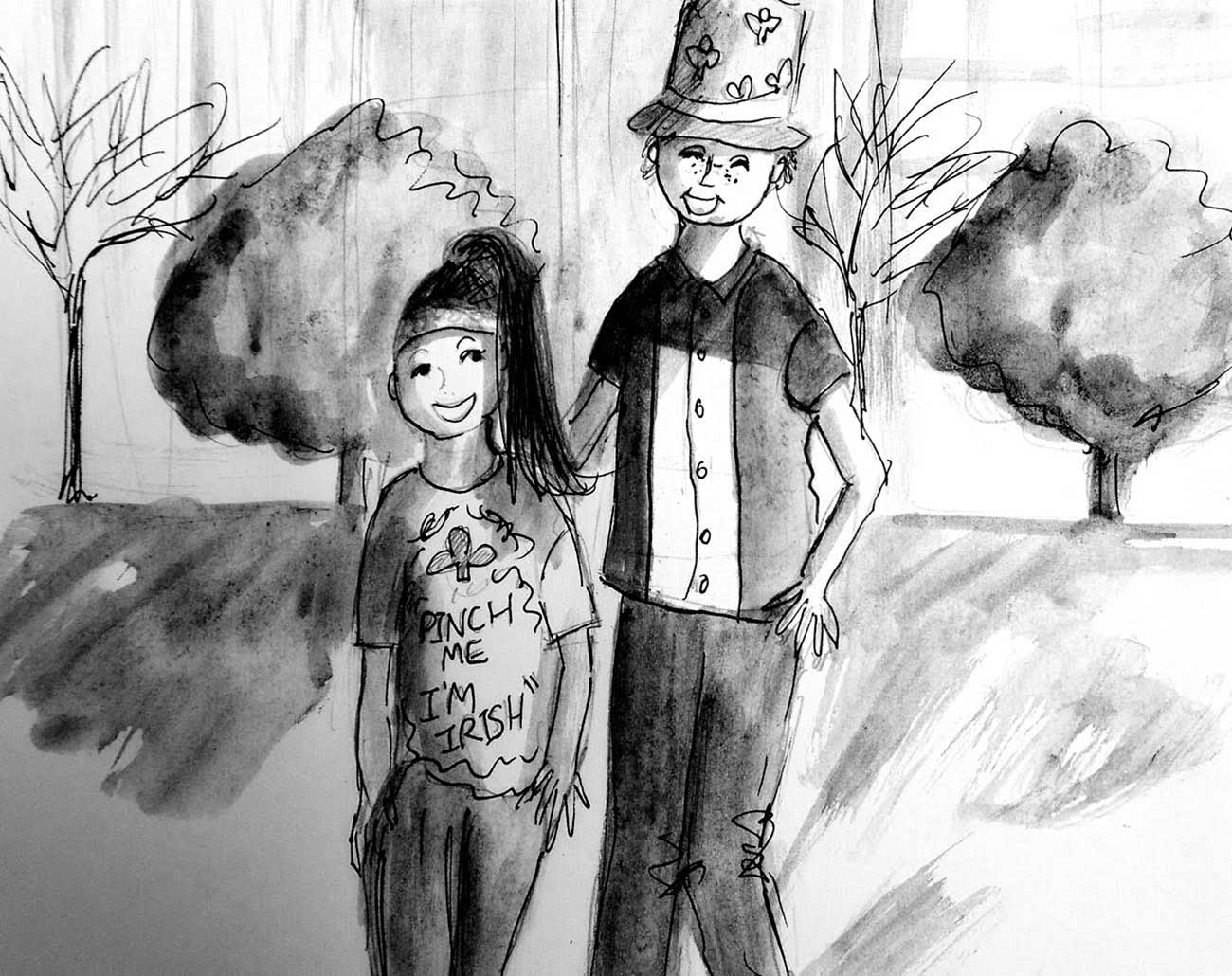 James held the leash of their large, friendly German shepherd, Rosco, and grinned at the attention from the crowd as he and Rosco walked the parade route.

Because of the large number of people and dogs in the parade, James and Mandy had become slightly separated from one another. Mandy slowed down to let Rosco and her brother catch up.

“Oh, my gosh! James, did you see what just happened?”

“No. What happened? Where’s Sparks?”

“Uh, we have a problem—a big problem.” Mandy explained the run-in with the terrier and Sparks’ disappearance.

“Are you serious?” James’s eyes grew wide as he slowed down to take in her news.

A few other dog-walkers quickly overtook them, so he picked up his pace again, rather than trip over a tangle of leashes.

James looked up at the tall buildings and the crowds of people everywhere. “Oh, man. This is not good.”

Mandy bit her lip. “I know! And this is just my luck. I knew something like this would happen. If only I would’ve just done the school project, then all this bad stuff might not have happened.”

“Don’t start that again. This has nothing to do with you refusing to make a leprechaun trap.”

“You don’t know that,” Mandy said. “I’ve had so much bad luck since I decided not to make one. I’m sure the leprechauns jinxed me—it’s been like this all week!”

“Well, who knows? Maybe. But you’ve got to stop blaming all of this on that project.”

“Alright, James. Fine,” Mandy said. “But what are we going to do about Sparks? Can you just help me? We’ve got to start looking for him.”

Mandy was afraid something bad might happen today. Ever since she had decided not to make a leprechaun trap for school, bad luck seemed to be affecting everything in her life. It was like the leprechauns knew that she had turned her back on them and were out to get her.

First, it was only little things that went wrong—like when her pencil broke in half for no reason, and when she tore a hole in one of her new socks, and when she got in trouble because she forgot to feed Rosco one evening.

Then, bigger things started happening. Her dad’s car got a flat tire when he drove home from work one night. She left all of her library books at home on school library day, so she couldn’t check out any new books for two whole weeks. And then it rained on the day of her school picnic at the park this week, so the picnic had been canceled.

She was worried that the bad luck would get even worse. And now it seemed it had.

Even though Mom said these bad things weren’t related to one another—that bad things just happened sometimes—Mandy was sure that the bad luck was all because she refused to make a leprechaun trap.

Every March the children had a bonus assignment—to make a leprechaun trap at home and bring it in the day before the holiday. To be fair, it was optional. She didn’t have to make one.

A leprechaun trap was any kind of contraption that a student could dream up that would trick a leprechaun into climbing inside. Some students made traps that looked like top hats with ladders made of sticks. The little leprechauns could climb up and hop in.

Other traps resembled pirate treasure chests or magical looking fairy beds—with real moss, pebbles and sticks to remind them of their homes. The key was to offer a bit of treasure—perhaps some fake gold coins or chocolate candy—anything that would trick a leprechaun into climbing inside. 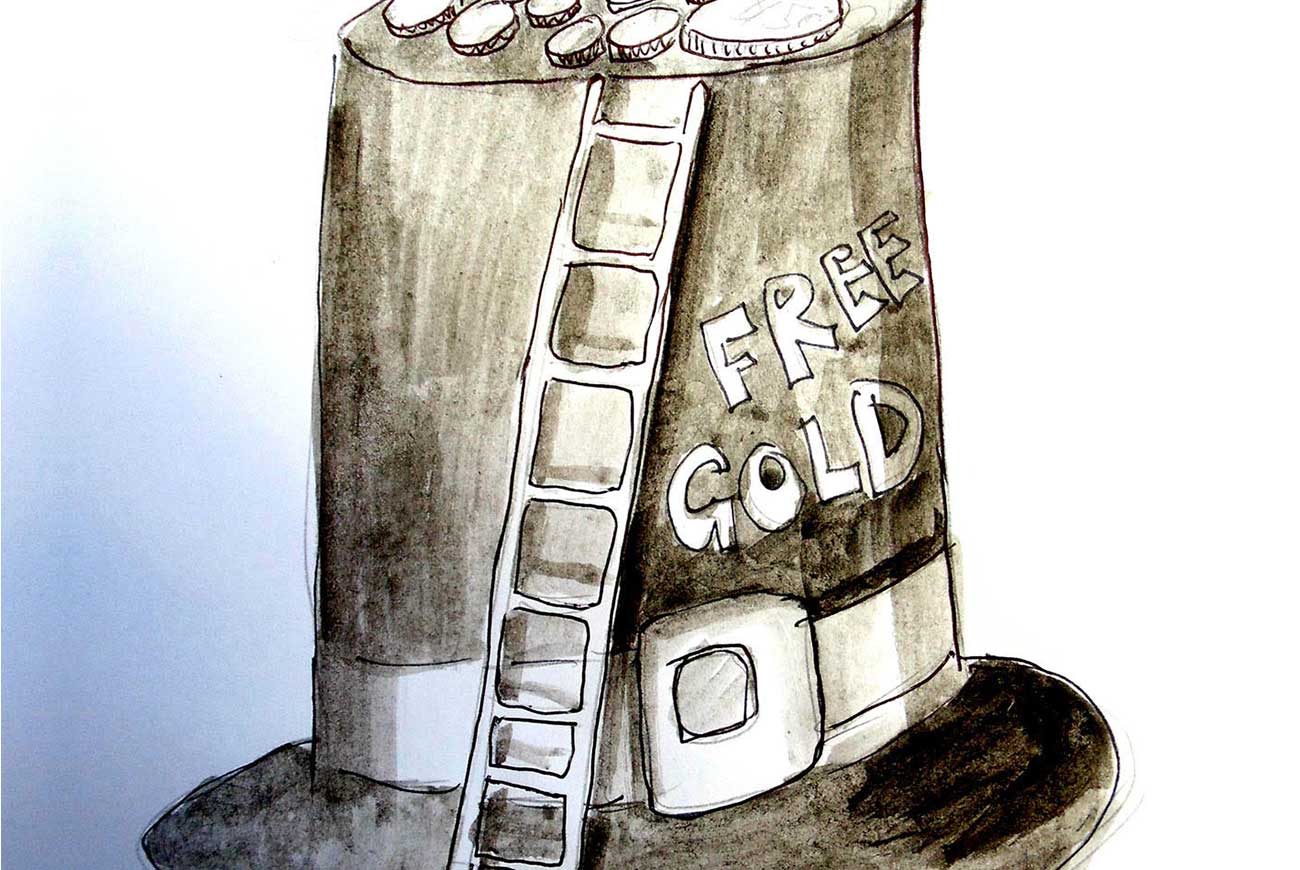 The teachers at school said the leprechauns would enter their classrooms on the night before St. Patrick’s Day in search of treasure. The kids would have left out their traps that night, and the hope was that one of the leprechauns would try to steal some of the treasure and become trapped.

Because if he were trapped inside, the kids would actually be able to see—see a real leprechaun! They wouldn’t have held him captive for more than a few minutes. No one wanted to hurt the little guy. The kids only wanted to see one in person, ask him a few questions—about magical things or gold, or maybe some riddles or legends, or where the end of the rainbow is—and then send him on his way, no harm done.

So every year Mandy’s teachers would ask each of the kids to make a leprechaun trap and bring it into school the day before St. Patrick’s Day. Then, all they had to do was wait for the leprechauns to sneak into their classrooms overnight.

But Mandy had been getting tired of the whole thing. Every single year since kindergarten, Mandy had built a trap, often staying up late with Mom the night before it was due, working hard to do her very best. Almost all the kids made one, in fact. But the problem was—no leprechauns ever became trapped.

Now she was in second grade, and she was sure it would be the same story all over again. The only thing the leprechauns ever did was leave a big mess all over the classroom—tiny, green footprints and overturned desks, piles of paper thrown about the room, green smudges on the windows. But there was never a leprechaun anywhere to be seen.

Sometimes they left treats, too. But the whole class shared those, so Mandy wouldn’t miss out on treats just because she didn’t make a trap. Nevertheless, no one ever seemed to catch one.

So Mandy wasn’t going to do it, not this time. She wasn’t about to pour her heart and soul into her work and wish as hard as she could to see a leprechaun, just to be disappointed again. She would skip it this year. She was done with it.

But ever since she had made that decision, the bad luck had started. St. Patrick’s Day was Monday. Today was Saturday—Saturday at the parade.

Yesterday, when the leprechaun traps were due at school, another bad thing had happened. Mandy’s best friend Trisha had gotten sick. Trisha had left school early, right before lunch, because she threw up. And now, Sparks—that sweet little pug that Mandy was supposed to look after—was missing.

Everywhere Mandy went it seemed like a black cloud was following her around. It seemed like the leprechauns thought that she didn’t believe in their magical powers, and now, she, herself, seemed to be trapped in an endless string of bad luck. The worst thing was: she had no idea how to make it end…

If you enjoyed reading this sample of Rosco the Rascal and the St Patrick’s Day Parade, click below to read more about Rosco and his author Shana here.

1. Have you ever felt like you had a run of bad luck? What happened?

1. Do you think there are ways to stop bad luck happening to you?

2. How might you be able to change your luck, if your luck was bad?