There was once a little baby boy called Bab-ba, he had bright blue eyes and golden curls, and he had Ayah for his nurse. She had been with Bab-ba ever since he was quite a tiny baby in long robes, and she was very fond of him. Her name was Jeejee-walla, but they just called her Ayah. 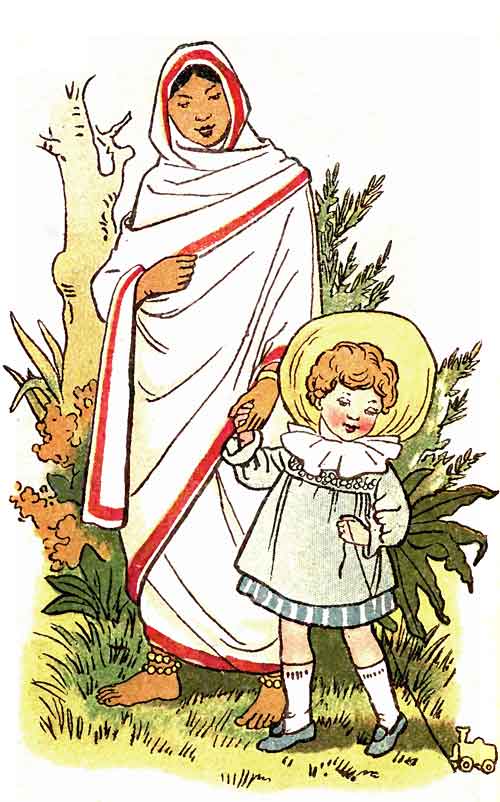 Bab-ba lived in a beautiful white house on the Simla Hills, with a big verandah running all around it. Round about the verandah was a garden, and outside the garden the jungle stretched for miles and miles, and in the jungle were all sorts of beasts and birds. 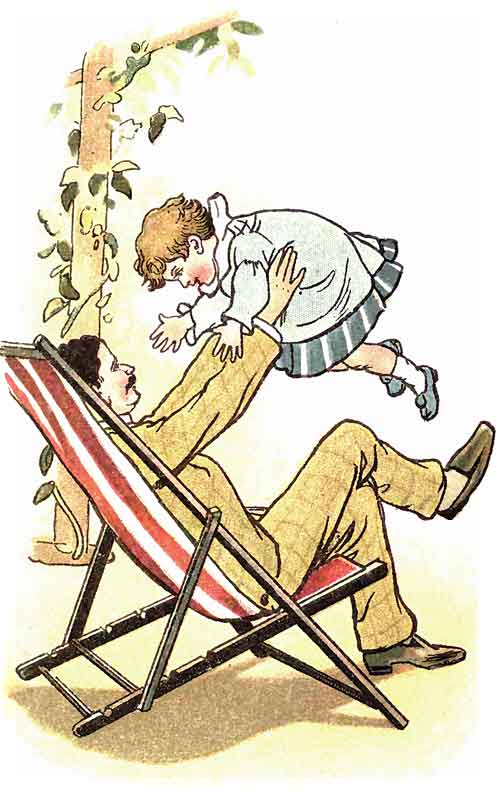 Little Bab-ba used to play on the verandah with his pets, Mioux-Mioux, the cat, and Wooff-Wooff, the dog, and they both loved him very dearly. Mioux-Mioux never scratched him when he accidentally pulled her tail, although she felt very much like doing so; and Wooff-Wooff used to stand on his hind legs and perform all sorts of funny tricks to make Bab-ba laugh. 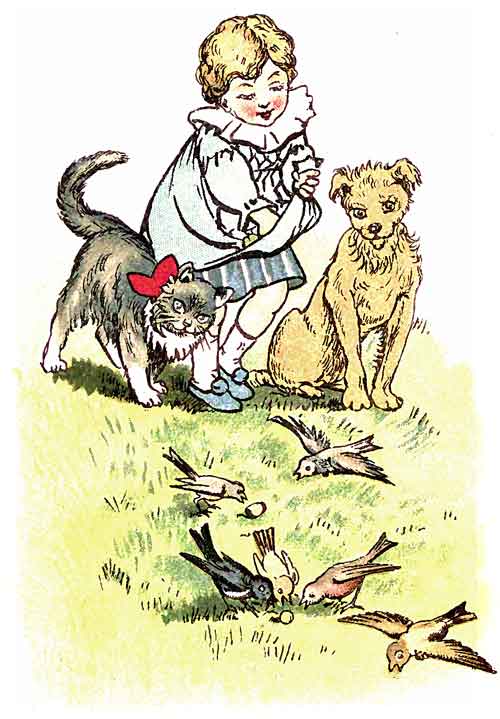 Every morning after breakfast Bab-ba threw bread crumbs out to the little birds on the lawn, and they used to sit in the trees and watch for him, and sing about him till he came out of the house. “Good little Bab-ba, who gives us our food,” one would sing; and “We all love little Bab-ba,” several of the others would reply from another part of the garden.

Mioux-Mioux used to watch them out of the corner of her eyes, but she never attempted to catch them because she knew that Bab-ba loved them; and Wooff-Wooff used to sit with his head on one side and wonder however they managed with only two legs and not four like his.

But one day when Bab-ba was feeding the birdies, the big snake Hoodo, who lived in the garden, came creeping under the verandah and tried to catch some of the birds while they were eating, but Bab-ba saw him and called out!—

and his Ayah heard him and came running out to see what was the matter. 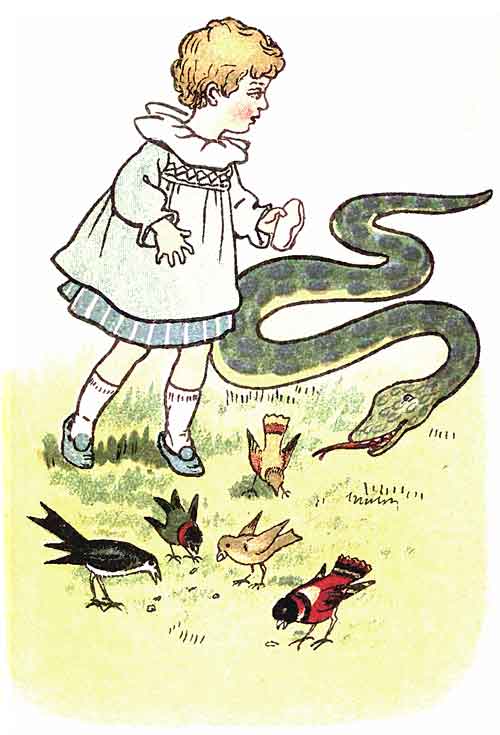 When she saw Hoodo, the big snake, she caught Bab-ba up in her arms and ran with him into the house, and two of the men came out with big sticks and beat Hoodo over the head and body till he could hardly crawl away again into his hole under a big tree in the garden. 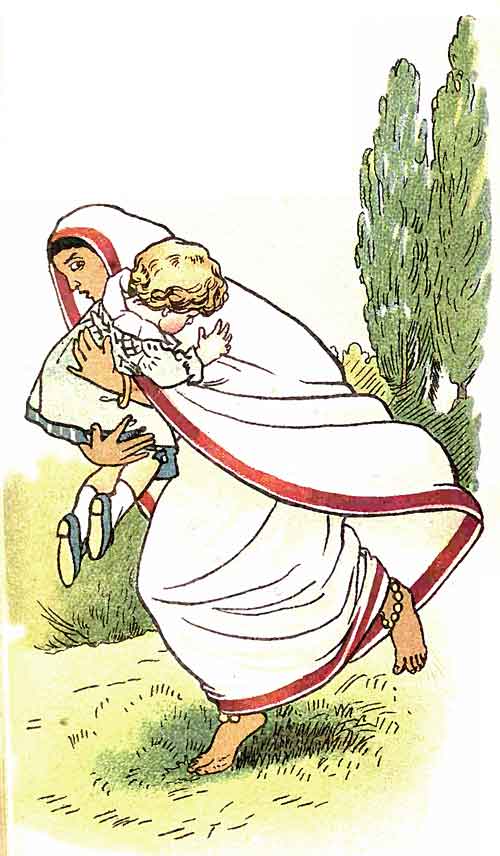 Now Hoodo was a very wicked snake, and was very angry about all this, and he thought and thought about it, and wondered how he could be revenged on little Bab-ba, for he put all that had occurred down to him, and so one day, after he had got better he went out into the jungle to see an old friend of his, Tig, the Tiger, and talk the matter over with him. 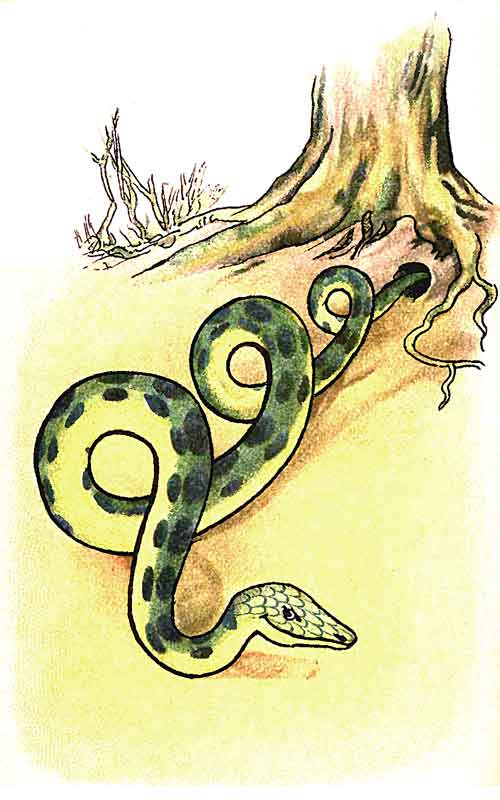 Hoodo thought that Tig the Tiger was as greedy and cruel as he was himself, and so he asked him how he would like a little fat baby boy for his dinner, and Tig licked his lips and said, “H’M! we shall see.” 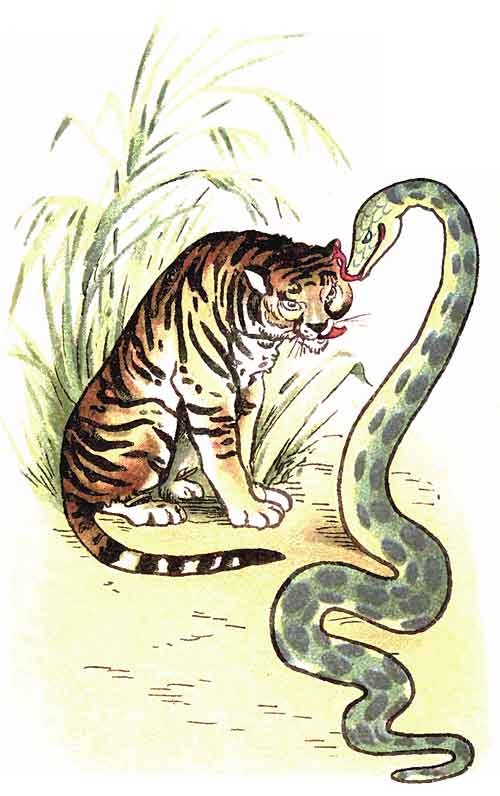 Then Hoodo went further into the jungle and met Prowl, the Wolf.

“How would you like a little fat baby to eat?” asked Hoodo; and Prowl, the Wolf, licked his lips and said, “Ha!” and nothing else. 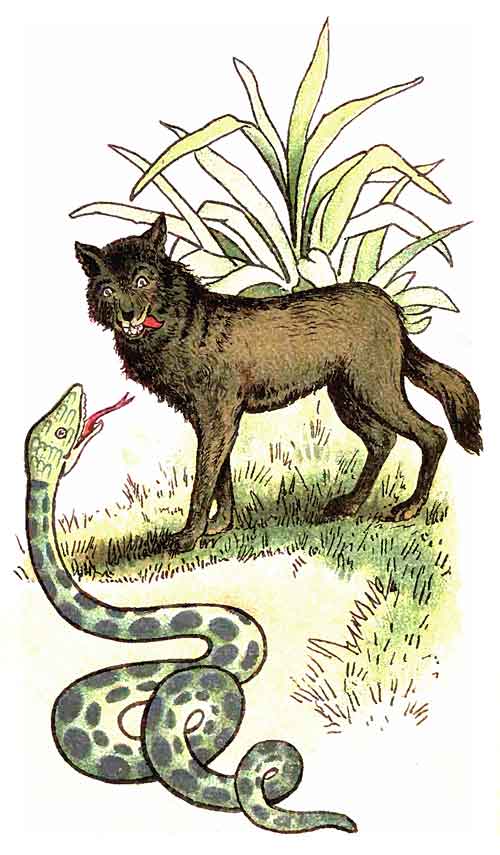 A little further on Hoodo met Bluf, the big brown Bear, and he asked him what he would do if he met a little fat baby in the jungle. 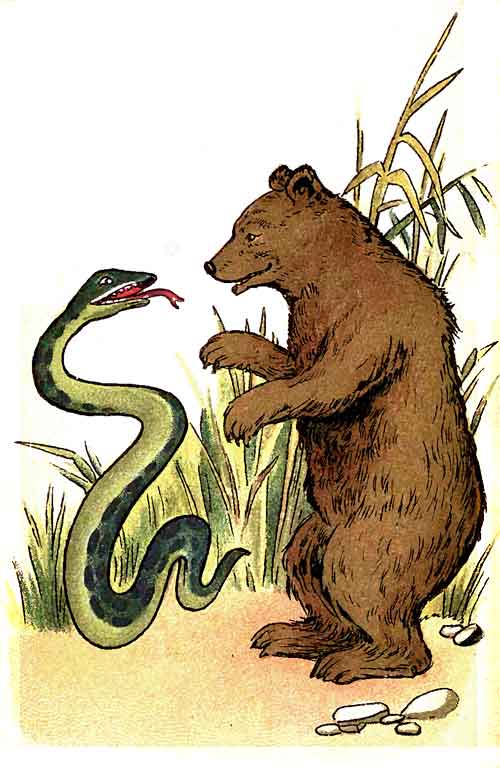 And Bluf stood up on his hind legs, hugged himself and said, “Ough! Very nice, very nice indeed!”

And then Poon-dah, the big wild Elephant, came crushing through the jungle, and Hoodo had to scurry out of his way, so that he didn’t get trampled upon. 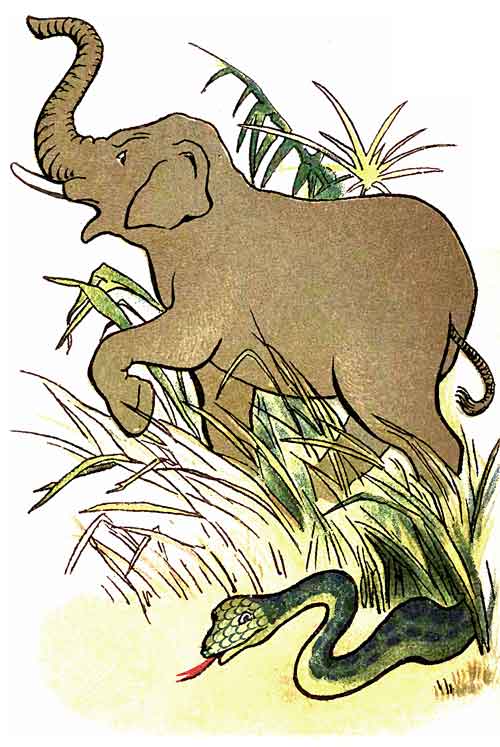 “How would you like a little fat ——” he screamed out, but Poon-dah made a loud noise with his trunk and went on, for he didn’t converse with snakes.

Nevertheless, Hoodo was satisfied, for he said, “If Poon-dah would trample on me in passing, so he would on a little baby if he were here;” and his wicked black beady eyes were bright and he laughed maliciously.

After this Hoodo went home to his hole under the tree in Bab-ba’s Father’s garden, and watched and waited till Bab-ba should be quite by himself; and one day when Wooff-Wooff had gone off after a wild rabbit, and Mioux-Mioux was fast asleep in the sun, the Ayah went into the house to fetch Bab-ba’s Noah’s ark, he was left alone on the verandah.

Then Hoodo came sliding out of his hole very quickly and stood before the verandah, waving his head backwards and forwards, and shooting out his little tongue, while the sun showed all the colours of the rainbow on his smooth shiny skin. 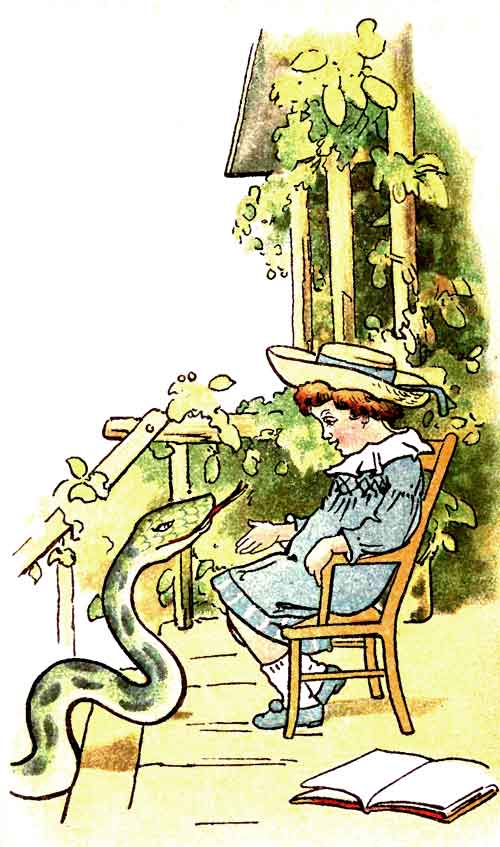 “No,” said Hoodo sweetly, “I’m not naughty, dear Bab-ba, and I know where some such beautiful flowers grow. Come with me and I’ll show you!”

“No,” said Bab-ba, shaking his head; but Hoodo continued to look at him steadily, and presently Bab-ba slid down from the verandah and came towards him.

Then Hoodo laughed and drew back quickly into the thick part of the garden, with Bab-ba running after him. 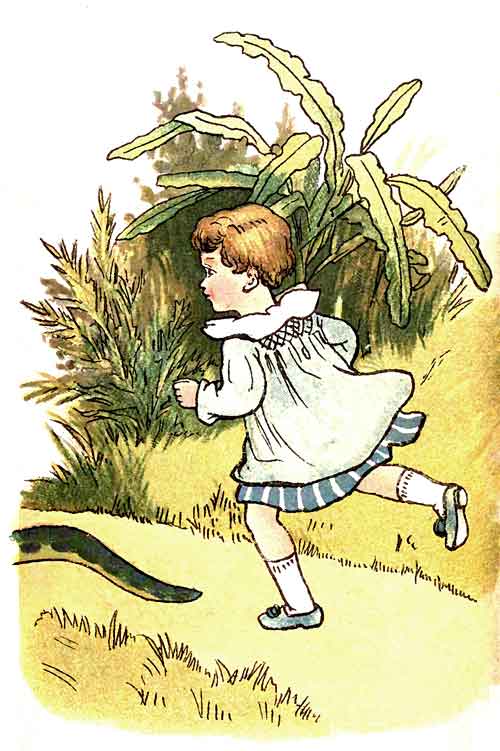 When the Ayah returned to the verandah with Bab-ba’s Noah’s Ark, and she saw his little empty chair and Mioux-Mioux asleep in the sun, she grew alarmed and ran about calling Bab-ba’s name, and wringing her hands, and Bab-ba’s Mother came out, and his Father, and they and some other men hunted about in the garden for a very long while, but could not find any trace of him, and Mioux-Mioux woke up and wondered what all the commotion was about, and Wooff-Wooff came back without the rabbit and wondered too. 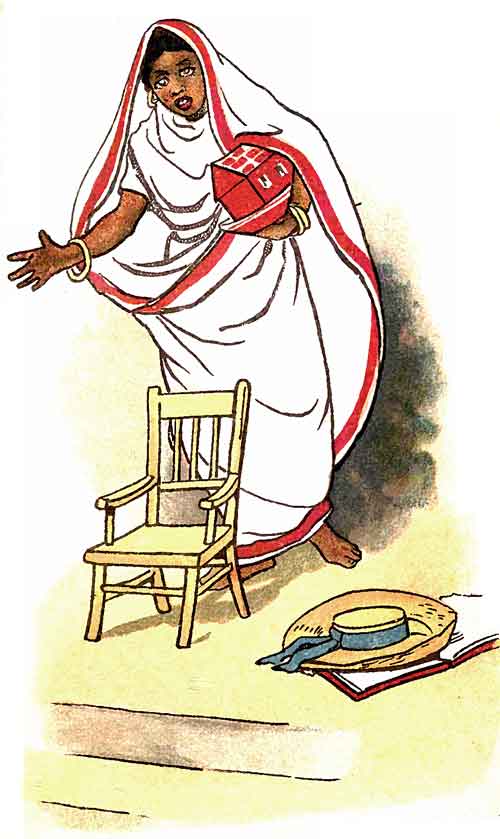 Wooff-Wooff went over to where Mioux-Mioux was sitting, and talked the matter over with her. While they were talking, some little birds overhead called out to them to attract their attention.

“Bab-ba,” they said, “Bab-ba has followed Hoodo, the Snake, into the jungle, and he will be lost and eaten by the wild beasts unless he is brought back. Quick! Quick! Go after him! Haste!” 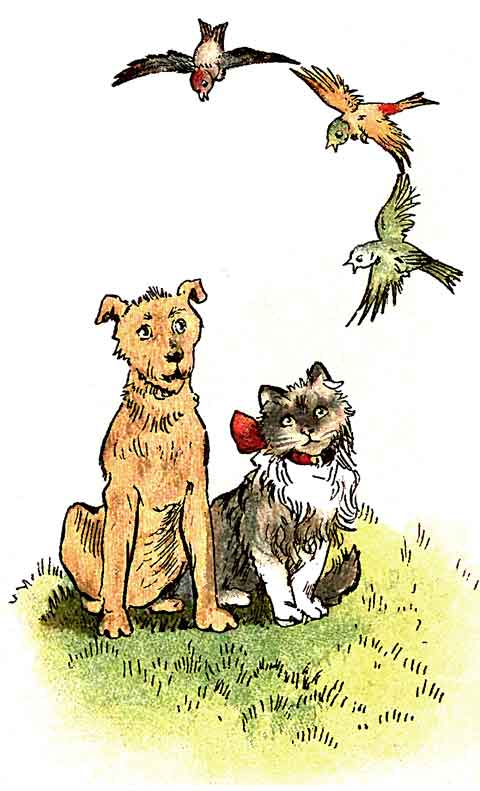 And so Wooff-Wooff ran to Bab-ba’s Father and Mother and tried to tell them.

He ran backwards and forwards towards the jungle, and barked and tried to make them follow; but they wouldn’t understand, and so at last he had to set out himself to try and find him. 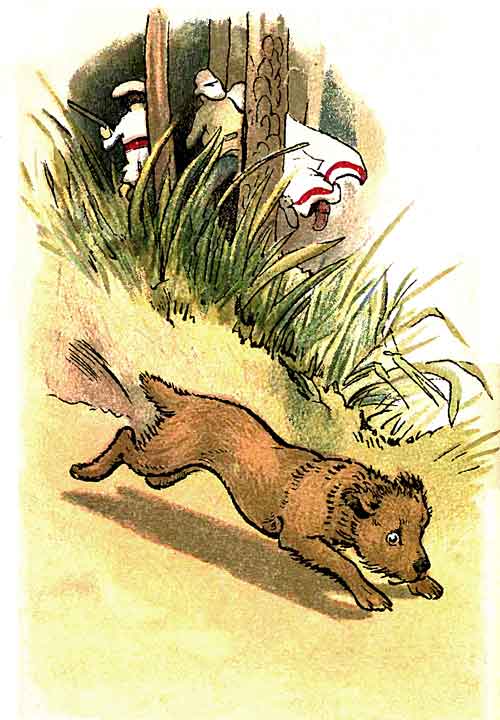 Now after Bab-ba had followed Hoodo a little way through the garden, the snake turned to a little path which led to a hole broken in the wall.

“You must crawl through here,” said Hoodo, “the pretty flowers are on the other side.”

So Bab-ba crawled through and found himself in the jungle. 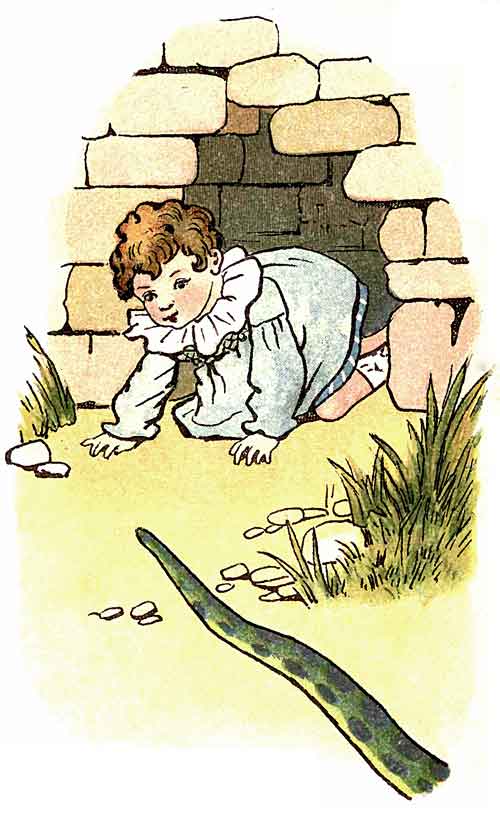 Further on! further on!” cried Hoodo, every time Bab-ba stopped to gather any, “there are prettier ones further on.” And so Bab-ba went on and on till he came to where Tig the Tiger lay asleep in the long grass.

“Now’s your time,” whispered Hoodo in his ear, “here’s the little baby for your dinner.” And Tig sprang up with a roar. 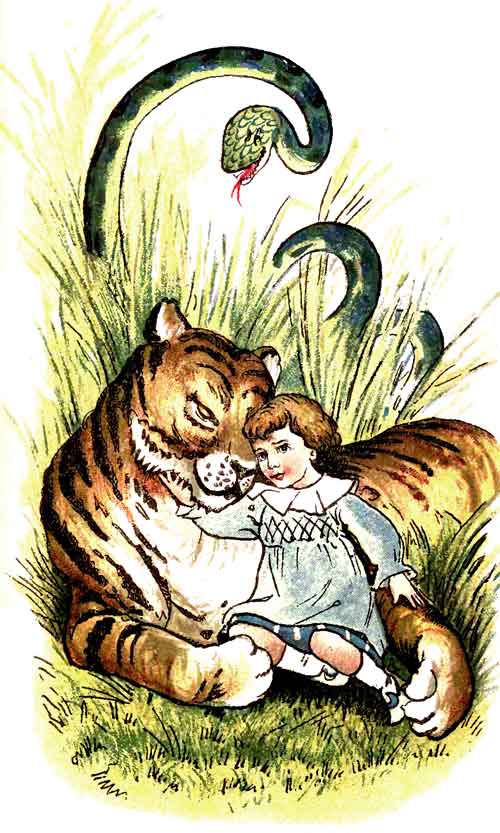 But Bab-ba wasn’t a bit frightened, and he only laughed, and said “what a big, big Mioux-Mioux!” And he put his arms around Tig’s neck and nestled his head in his soft fur, till Tig forgot all about his dinner, and purred with delight just like Mioux-Mioux did when she was pleased. 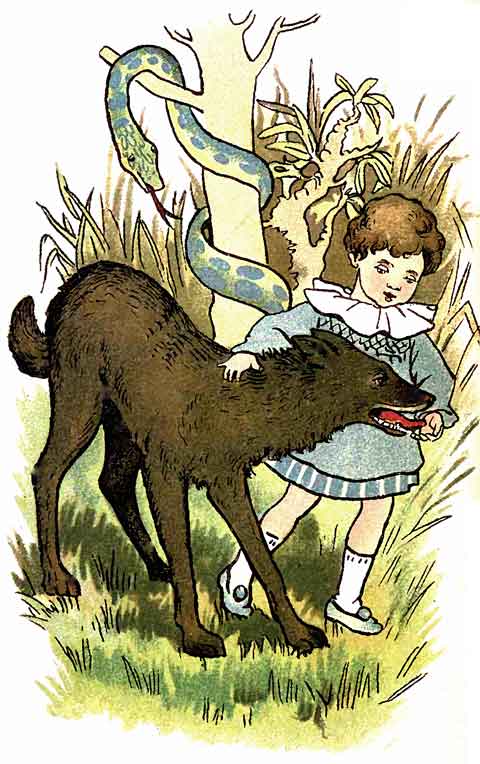 Hoodo was very angry at this, and finding that Tig was making friends with Bab-ba instead of eating him up, he called Bab-ba to him and said, “Come, let us be going, or we shall be late home.” And Bab-ba kissed Tig, the Tiger, and followed Hoodo further into the jungle, till they met Prowl, the Wolf.

And Prowl said, “Ha!” and was going to spring upon him and eat him up.

But Bab-ba only laughed and said, “What a big Wooff-Wooff!” and patted him on the head, and looked into his eyes so that Prowl forgot all about eating him, and licked his hands and frisked about him just as Wooff-Wooff would have done.

This is silly,” said Hoodo angrily. “Come away, it is near to sunset, and we must be getting home,” and he led the way to where Bluf, the big brown Bear, lived.

“I’ve brought the little baby for you,” said Hoodo.

And Bluf said, “Ough! very nice, very nice indeed!” And caught Bab-ba up in his arms and hugged him. 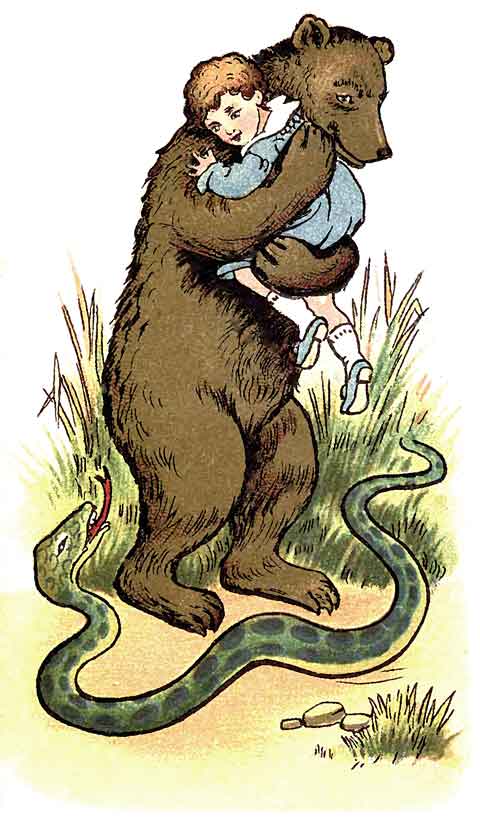 “Just like my Ayah does!” laughed Bab-ba, and he patted Bluf’s cheeks and kissed him, so that Bluf didn’t want to eat him at all, but only to hug him and keep him warm.

Just then there was a loud trumpeting heard, and Bluf put Bab-ba down to the ground, and Hoodo slid off into the grass, hissing. “Now Poon-dah is coming and you will be trampled to death. Good-bye, little Bab-ba, I hate you!” 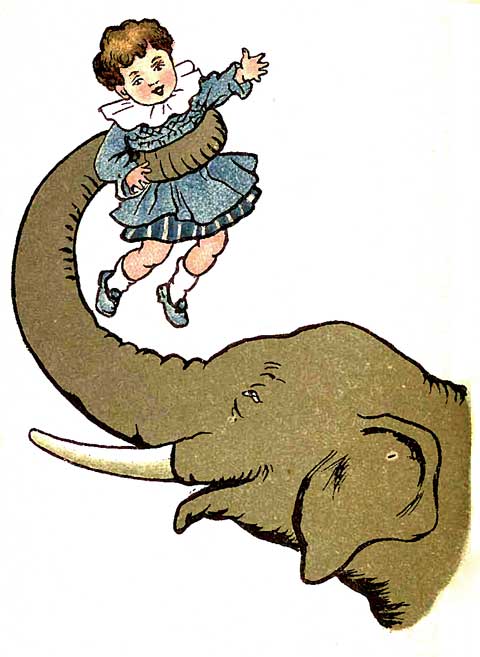 But when Poon-dah came and saw the little baby, he remembered that he had not always been a wild elephant, but had once himself belonged to a man, and so he picked little Bab-ba up with his trunk and placed him gently on his back. 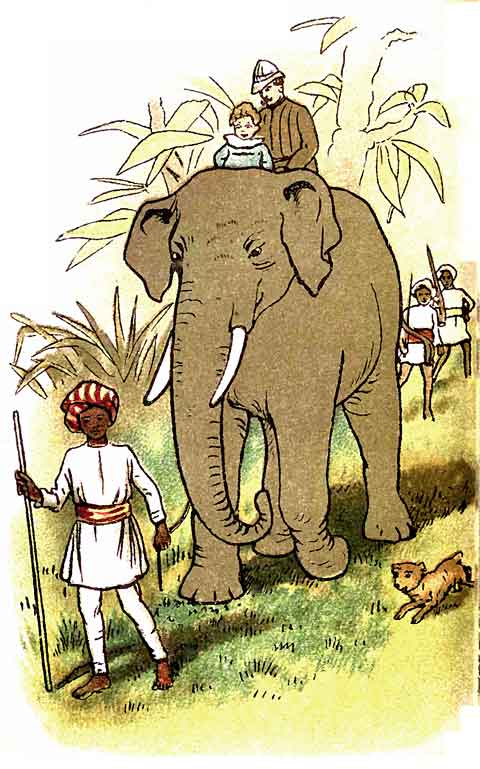 And that’s the position in which Bab-ba’s Father found him, when at last he had understood Wooff-Wooff’s barking, and had followed him into the jungle, accompanied by some men armed with guns and sticks. Wooff-Wooff traced the little boy by his scent, till they came upon him riding on Poon-dah’s back.

And now a funny thing happened, for amongst the men was one who had once been Poon-dah’s keeper, and Poon-dah remembered him and allowed himself to be led by him to Bab-ba’s home. And so they returned in triumph with Bab-ba and his Father on Poon-dah’s back, and good Wooff-Wooff barking and frisking by his side.

The wicked Hoodo was justly punished, for just as he was going into his hole under the tree, he met an old enemy of his, Tiv, the Mongoose, and the two fought and fought for a long while, till at last Hoodo was exhausted and stretched himself out and died, while little Tiv sat up and rubbed his paws together to clean them, and then skipped off to his new little home under Bab-ba’s verandah, where he still lives to keep away any other wicked snakes from harming him. 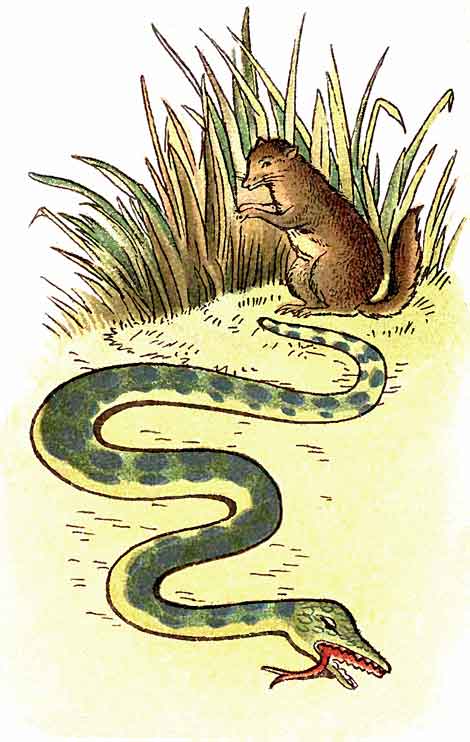 1. Bab-ba followed Hoodoo into the forest because he promised to show him pretty flowers. Should he have done it?

2. Is your answer different if Bab-ba really wanted to see the pretty flowers?

3. Bab-ba knew that Hoodoo was naughty and dangerous, because Ayah, Mioux-Mioux and Wooff-Wooff told him so. Why do you think Bab-ba forgot?

4. What might have been a good thing for Bab-ba to do before he followed Hoodoo into the jungle?

5. The tiger, the bear, the wolf and the elephant were all kind to Bab-ba. Did this keep Bab-ba safe in the jungle? How?

6. What happened to Hoodoo? What might this say about having friends or enemies?

7. This is a make-believe story about a baby in the jungle. Do you think a tiger, a bear, a wolf and an elephant would be gentle and friendly in real life?

8. What would be the best way to approach any of these animals in the wild?