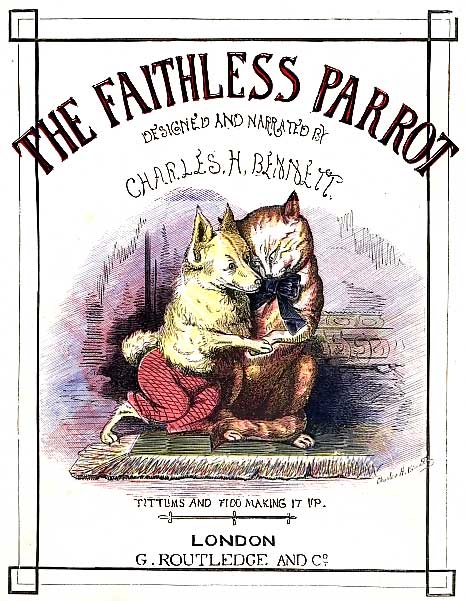 There once lived happily together, in a fine house, a tortoise-shell Cat and a pretty white Dog: the Cat’s name was Tittums; the Dog’s, Fido.

In course of time the pretty Dog fell in love with the Cat, and only waited for a good chance to disclose his affections. This came one day, when Tittums had put her paws on the fender, dropped her head a little on one side, half closed her eyes, and seemed thinking of nothing at all.

Then Fido, who lay stretched at full length upon the hearth-rug, looked steadfastly at her, and heaving a gentle whine, said,— 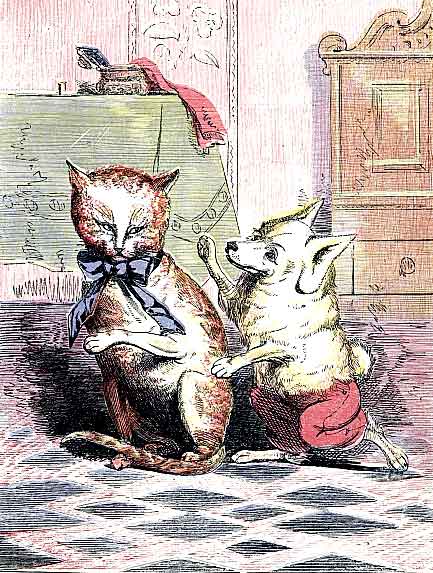 “Indeed!” replied the prudent Cat, not wishing to show him how anxious she was.

“Yes, indeed,” continued the little Doggy, rather hurt at her coldness: “It’s you that I’ve fallen in love with. Do you like me, Tittums?”

But Tittums would not answer, even with a single purr-r! and it was only upon her giving him a sly look out of the corner of her left eye that he guessed how much she did like him. However, made bold by even this small token of esteem, he came quietly up, and sat by her side; even going so far, at last, as to take her out for a short walk down the garden-path, where they looked through the railings at the people passing by.

“Well,” said Fido to himself, “I have no doubt but she will love me in time; all the more, as I have great hopes of growing bigger before the spring.”

But one morning, when Tittums came in from a visit she had been paying her mamma, she was followed by a gentleman from the tropics, who, with all impudence, made himself quite at home, pressed Tittums’ paw to his heart, called her “the loveliest of Cats,” asked her to oblige him with a song, which he had been told she could sing very sweetly, and never took the least notice of poor Fido, who was sitting in the corner. To tell the truth, poor Fido was very cross, and began to growl quite savagely; the more so when, to his dismay, he beheld the pleasure with which Tittums heard all this nonsense. He could not think what right the bold stranger had to come there unasked; for all that he had bright red and green feathers, a rakish, broad-brimmed hat, and a gold-headed walking-cane, he was not good-looking, that was very certain.

But Tittums was very much struck by his appearance and bearing; his feathers were so pretty, he spoke so many languages, shrieked so terribly and in such a loud voice, had travelled so much, and was so struck by the beauty of Tittums, that, poor little Cat as she was, she ceased to care a button for faithful Fido, and kept all her sly glances for Mr. Paul Parrot.

“Lovely Tittums,” said Mr. Paul, “you must forget such upstart puppies as Fido. Listen to me—I am a traveller—I speak five languages,—I have a palace made of golden bars, within which is a perch fit for a king,—I have a pension of bread and milk and Barcelona nuts: all of which I will share with you. To-morrow we will go for a trip into the field next to the house. Good-by for the present, my dear Pussy Cat;” and he went away kissing his hand. 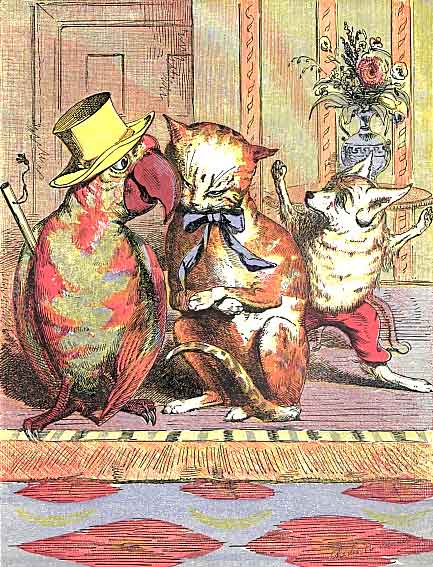 As day followed day, Miss Puss neglected her little Dog more and more. She walked out with Mr. Paul Parrot, she sang to him, looked kindly at him, and, in fact, only seemed happy when he was by. Poor Fido was true to his first love, although almost brought to despair; he got very thin indeed, and his fine bushy coat, which he had kept nice and clean, became ragged and dirty.

Indeed, Mr. Parrot carried all before him; he was so grand, so loving, and so clever, that Fido from being deserted became despised. 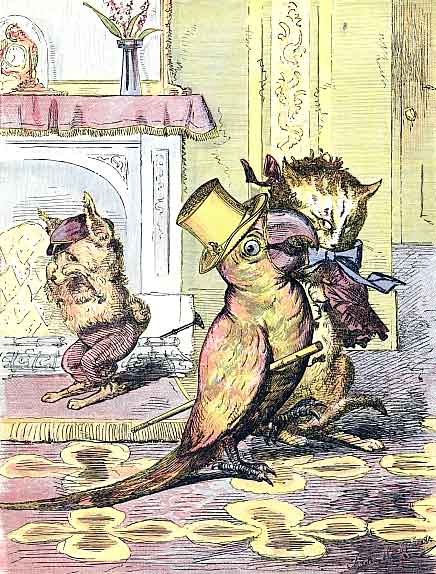 One evening, just after dark, as he was roaming about, feeling very sad, and thinking that, perhaps, it would be better to run away, he all at once found himself in the next garden, and while he was looking round him, he heard voices.

“Lovely Mrs. Daw,” said one of the voices which he seemed to recognise, “I am a traveller—I speak five languages—I have a palace made of golden bars, within which is a perch fit for a king,—I have a pension of bread and milk and nuts; all of which I will share with you. To-morrow we will fly for an excursion on to the great oak-tree in Farmer Hodges’ field.” 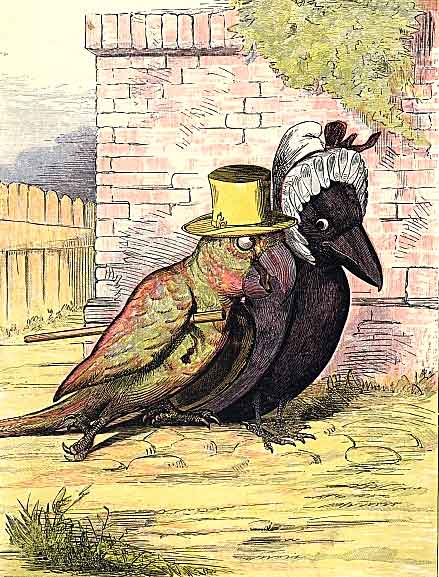 “Dear me!” thought Fido, “this must be Mr. Parrot.” And, sure enough, so it was,—Mr. Parrot, indeed, and making the warmest of love to old Mrs. Daw, the widow of Miser Jack Daw, who, during a long life, and by means of stealing and saving, had laid by a large fortune, which he had left Mrs. Daw to enjoy.

The old widow seemed very much pleased at the warmth of Mr. Paul’s love, and no doubt thought that every word he said was true; leering round at him with her old eyes, and wishing that she had put on a clean muslin cap, as it might have made her look even younger than she thought she did.

As for Fido, he almost jumped for joy; he ran home as soon as ever he could.

“Oh, Tittums!” said he, heedless of her scornful looks, “what do you think I have found out? There is that rascal of a Paul Parrot, who pretends so much love for you, courting Widow Daw at this very moment; and if you come at once you may see it with your own eyes.”

“Nonsense!” replied Tittums: “I do not believe it.”

“Well,” said the Dog, “to convince you, if you will only come to the other side of the wall you shall see that what I have said is quite true.”

But Pussy, trusting in the honour of Mr. Paul, would not believe a word, and it was only after a great deal of persuasion that she was induced to jump over the wall and listen. 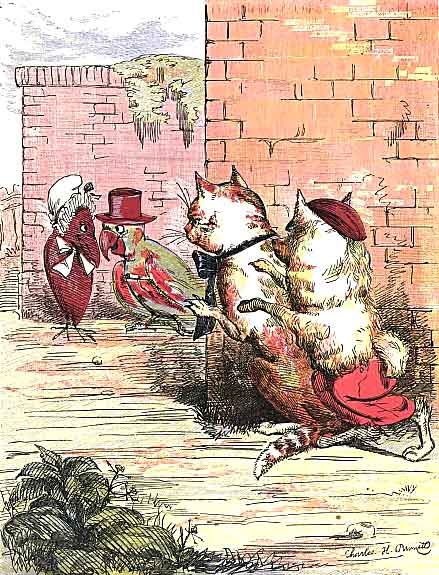 Mr. Paul and Mrs. Daw were still courting, and the Parrot was trying, by coaxing the old lady, to find out how much she was worth, and where all her treasures were hid. Indeed Mrs. Daw was just on the point of telling him her secret, when Tittums, unable to contain herself, rushed at Mr. Paul and scratched his face.

“Oh, you bad Parrot!” she said; “did you not promise to marry me, and take me to your golden palace?”

“Golden palace!” screamed Mrs. Daw: “why, you wicked bird, that’s what you promised me. Stay, ma’am, what did he say besides?—did he promise you any bread and milk, or any Barcelona nuts?”

“Yes, he did—he did—he did,” continued the Cat, scratching and clawing the false, faithless Parrot as she spoke.

“Well,” said Pussy, now fairly exhausted, “I hope you are satisfied: if ever you come near our house again, I’ll scratch out every feather you have on your back;” and so she left him, taking Fido with her, who, in spite of his general good nature and the Parrot’s rage, could not resist giving him two or three sharp bites. 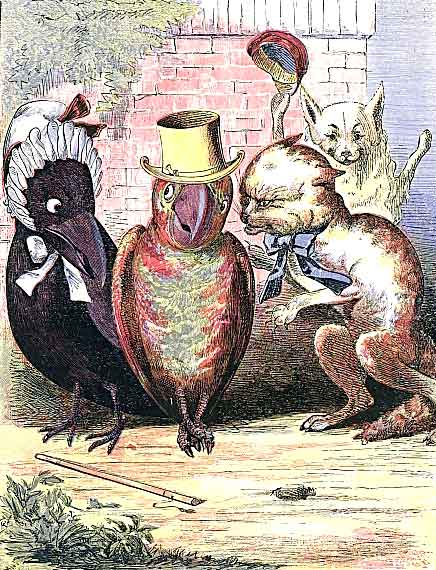 As soon as Mrs. Daw was left alone with Paul, she began to upbraid him with his falseness,—“You vulgar, stuck-up, ugly, awkward deceiver! you have neither honesty enough to live by, nor wings enough to fly with.” Whereupon she jumped at him and gave him such a plucking as spoilt his good looks.

Never after this was the Parrot able to hold up his head. Every one scorned him; even his golden palace turned out to be a brass cage; and for his misdeeds a chain was fastened round his leg. He was confined to a wooden perch, which, out of pure spite, he was always pecking.

Tittums could not help admiring the constancy of Fido; and when in the spring he had grown bigger, and was promoted to a sweet red and black collar, Pussy found that she loved him very much indeed, and made up her mind never more to forsake him. 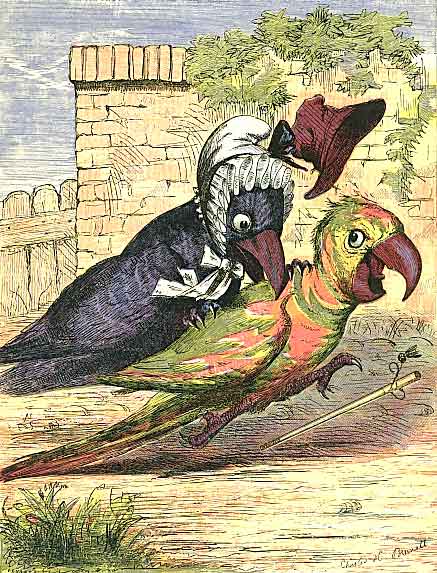 1. Why do you think Pussy and Mrs Daw were so upset when they discovered that Paul Parrot had been telling them both the same stories?

2. Why do you think Paul Parrot told Pussy and Mrs Daw that he had a cage of gold bars, when it was only brass?

1. Fido hopes that Pussy will love him with the passing of time. Do you think this happens with love? Does it always grow over time? Why or why not?

When the Fires Came