Mamma Goose was trying to think. She had left the barnyard because it was so noisy there that she could not collect her wits, and had hidden herself between the rows of tall red hollyhocks which border one side of the garden. Here, at least, it was quiet. 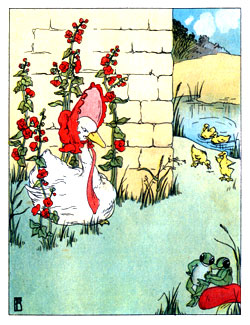 Thinking had always been hard work for Mamma Goose. And besides, her family kept her so busy that she had no time for it anyway. There was always something to be done for the babies.

Mamma Goose was trying to think. For Mamma Goose had a whole dozen of the dearest little goslings, and she was very proud of them. They were soft, and round, and fluffy, like little yellow balls, and besides being prettier than any other babies in the barnyard, they were so bright, too, and knew as much as any gosling could be expected to know,–far more than little Red Hen’s chicks, even though she did make such a fuss about them!

The goslings could hunt for their breakfasts almost as well as their mother, while little Red Hen had to scratch up every thing her children ate. And as for the water–well, the chicks were simply not in it! They did not like to be in the water at all, but the goslings loved their morning bath in the brook better than anything else in the whole day.

Yes, her goslings were by far the finer babies! Mamma Goose swelled with pride when she thought of it, and carefully smoothed her feathers. She could have been perfectly happy except for just one thing. She was afraid that before long something dreadful might happen to the goslings, and once more she settled herself to think.

There was something wrong in the barnyard. What could it be that came each night when every one was sound asleep? And what was it that carried one of the chickens away each time so that, when the next morning came, there was always one less than there had been the day before?

Whatever it was, it made no noise. Only, always the next morning some one was missing, and usually it was a little baby chick that was gone. The worst of it was that no one else knew any more about it than she did.

To be sure, little Bantam Rooster had said it was the hawk. But then Bantam always thought he knew everything, and was almost always wrong, so that nobody ever believed anything he said.

Besides, if it had been, the big white cock would have known it, for the big white cock knew everything. He was the king of the barnyard, and took care of them all. He had a bright red comb and beautiful, long, green tail-feathers, and Mamma Goose thought him the most wonderful being in the whole world.

But something seemed to be wrong with him, too. He did not crow half so often as he used to, and his beautiful red comb did not stand stiff and straight any more. It drooped to one side and he looked very tired and very unhappy, as if he, too, had been trying to think. But if he did not know what it was that came night after night, then nobody knew.

Everything had been very different when old Fido lived in his little house by the barnyard gate. Nothing had ever happened to trouble them then. But old Fido was gone now, and nobody knew about that either. One morning after breakfast he had trotted off behind the wagon, and nobody had seen him since. Every one liked old Fido, and they all missed him, but he had never come back and his little house stood empty all night long. 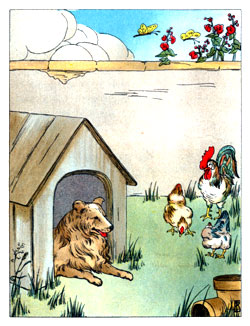 Some thought that he had gone to take care of the sheep who lived in the big field on the other side of the hill. But it was only little Bantam Rooster who said so. Nobody knew. Things had been better, though, before Fido went away, for he had always stayed awake all night and watched to see that no harm came to any of them.

Then suddenly Mamma Goose had a thought, and a very bright idea it was, too. She would stay awake all night herself, and watch and see with her own eyes what it was that carried away the little chicks. As soon as she had made this plan she stopped thinking, for it was such hard work and the sun was getting very hot on her poor head. Besides, the goslings had been in the water long enough. They never did know when to come out!

So she waddled down to the brook to get them. Then they all went for a walk in the meadow where the red clover-tops nod in the wind, and Mamma Goose did no more thinking that day. 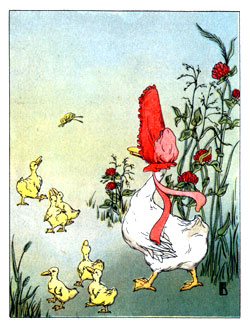 But when night came, she did not forget her plan. As soon as the sun had gone down behind the hill, the chickens all perched themselves along the roost with the big white cock at the end of the row, and soon they were all fast asleep. Little Red Hen gathered her chicks under her wing to keep them cosy and warm, and then she, too, went to sleep.

Mamma Goose tucked her babies in also, and spread her wings wide over them all, but she did not go to sleep.

Instead, she kept both eyes wide open and stared straight at the big white cock, that she might not go to sleep without knowing it. It was very hard to sit so long in the dark and keep awake. First one eye and then the other would close tight, but Mamma Goose would stretch them wide open again, and stare harder than ever at the big cock, and then she saw that the cock was watching, too, and that made it much easier.

Then it happened after a long time, when the moon had climbed high above the trees, and everything was very quiet, that a long, slim fox stole softly beneath the fence and came creeping–creeping across the barn yard. Mamma Goose was so frightened that she almost said “Quack! quack!” out loud, but still she kept her eyes on the big white cock, and that was a great help. 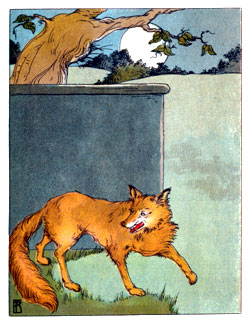 The fox was creeping softly toward the roost where the chickens slept in a row,–but not straight toward it. He was keeping as far away from old Fido’s house as he possibly could. Although she was so frightened, Mamma Goose wondered why. She had always heard that the fox was afraid of old Fido, but didn’t he know that Fido was far away? Didn’t he know that his little house was empty? It did not take the fox long, however, to creep softly past it, and in the morning another little chick was gone!

But a new thought had come to Mamma Goose. If the fox would not go near old Fido’s house, then he could not find the goslings if they hid inside. It seemed to Mamma Goose the only thing to do, and a very sensible plan indeed. She would ask all the chickens to come in, too, and then they would all be safe!

But when she went the next day to her best friends and told them about her plan, most of them only made fun of her, and all of them turned their backs on her. No one would listen! 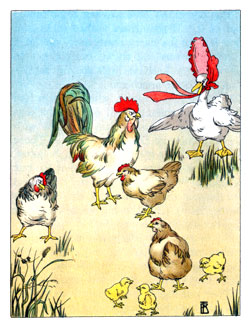 But Mamma Goose was not to be talked out of it. If the others wished to sit still and let the fox carry them away one at a time, that was one thing, but for her to do nothing to keep her little goslings safe,–that was quite another.

So that very evening, when the sun had gone down behind the hill, and the chickens had perched themselves on the roost with the big cock at the end, Mamma Goose led all the little goslings into Fido’s house. Every one laughed when she went in, but Mamma Goose had made up her mind, and she kept straight on as if she had not heard them! But the big white cock–he did not laugh at her! 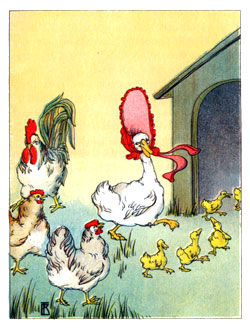 So every night Mamma Goose led her babies into Fido’s house, and every morning brought them out again safe and whole. But always a little chick was missing!

Then one night when the sun was sinking low, the big white cock flew up to the top of the fence and crowed. All the chickens listened then, while he told them that they were every one to go into old Fido’s house that night with Mamma Goose; for that was the only way to keep the fox from carrying them all away.

Now when the big cock said that they were to do anything, it was always done, and no words about it! So that night all the chickens went into Fido’s house. It was all they could do to get in, for the house was not large; and some of them were not polite and pushed against the others to make more room. But the big cock did all he could to keep them in order, and at last all the little chicks went to sleep. 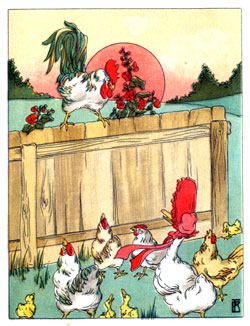 But the next morning when the farmer’s boy came to scatter the corn for breakfast, he looked at the empty roost and did not know what to think!

By and by, however, he found them and at first he only laughed, but after he had seen that no little chick was missing, he looked as if he were thinking, too. And that evening, when the sun had gone down behind the hill, the farmer’s boy came back, and who do you think was with him?–old Fido, wagging his tail, and looking as if he were very glad to get back!

But she didn’t dream that anything more could happen, and she was too much surprised to think about anything at all, when old Fido came trotting straight up to her, and wagged his tail just for her alone, and told her how glad he was that she had been wise enough to use his house, and had taken such good care of the chickens while he was gone, and what a sensible little goose he thought she was! You might almost have knocked Mamma Goose over with one of her own feathers! She couldn’t imagine who had told him. 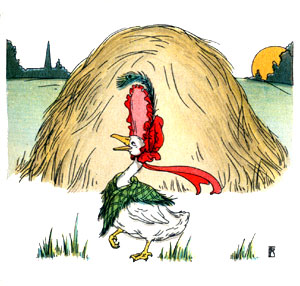 But perhaps it was the big white cock.

1. Why was Mamma Goose so wise when it came to solving the problem of the disappearing chicks?

2. The other farmyard animals laughed when Mamma Goose told them her idea to protect the babies. Do you think that when people laugh at your ideas, it makes them a bad idea? Why or why not?

The Musicians of Bremen

Rabbit Goes on a Quest