Little Red Hen lived in a barnyard. She spent almost all of her time walking about the barnyard in her picketty-pecketty fashion, scratching everywhere for worms. 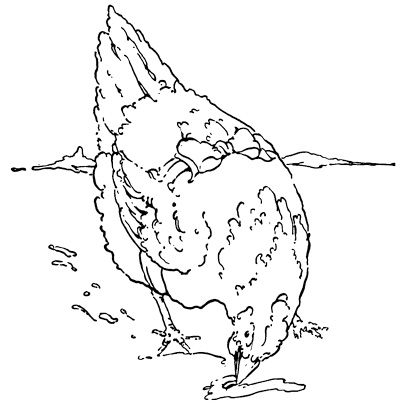 She dearly loved fat, delicious worms and felt they were absolutely necessary to the health of her children. As often as she found a worm she would call 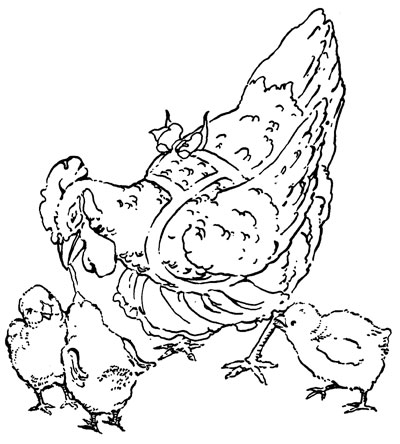 Then they were gathered about her, she would distribute choice morsels of her tid-bit. A busy little body was she!

A cat usually napped lazily in the barn door, not even bothering herself to scare the rat who ran here and there as he pleased. 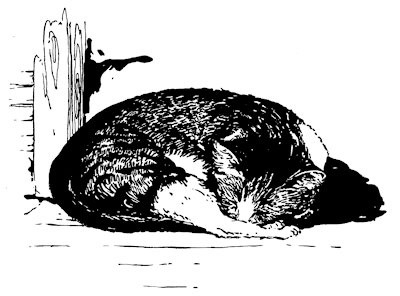 And as for the pig who lived in the sty—he did not care what happened so long as he could eat and grow fat.

One day the Little Red Hen found a Seed. It was a Wheat Seed, but the Little Red Hen was so accustomed to bugs and worms that she supposed this to be some new and perhaps very delicious kind of meat. She bit it gently and found that it resembled a worm in no way whatsoever as to taste although because it was long and slender, a Little Red Hen might easily be fooled by its appearance. 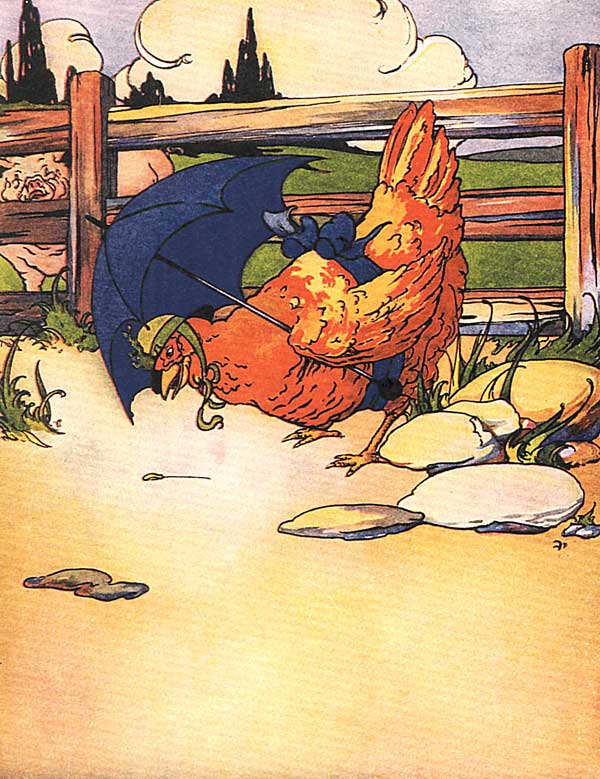 Carrying it about, she made many inquiries as to what it might be. She found it was a Wheat Seed and that, if planted, it would grow up and when ripe it could be made into flour and then into bread.

When she discovered that, she knew it ought to be planted. She was so busy hunting food for herself and her family that, naturally, she thought she ought not to take time to plant it.

So she thought of the Pig—upon whom time must hang heavily and of the Cat who had nothing to do, and of the great fat Rat with his idle hours, and she called loudly:

“Who will plant the Seed?” 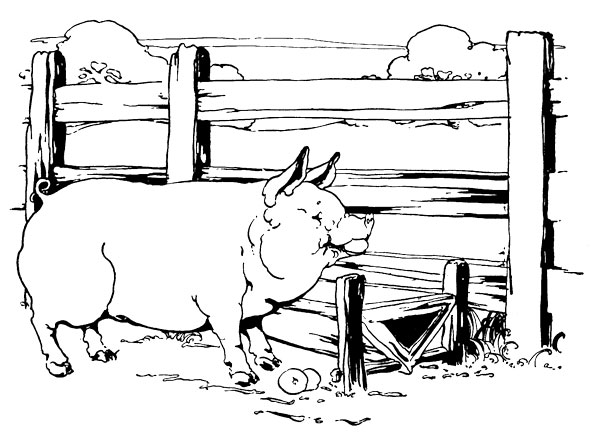 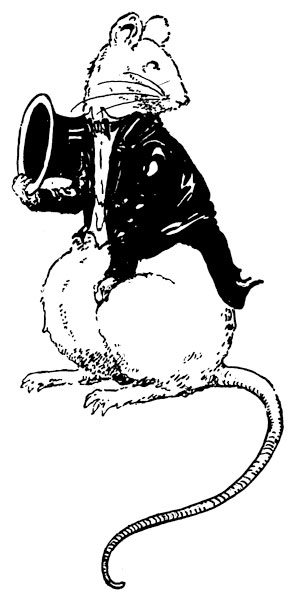 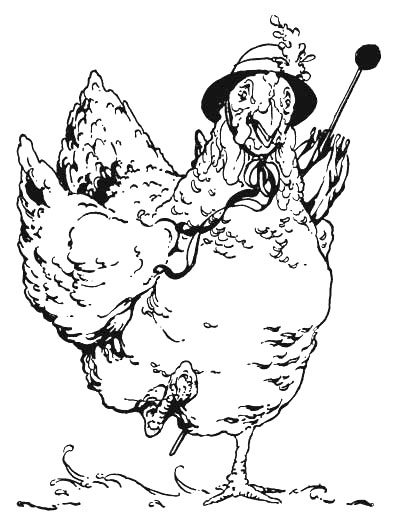 So one day the Little Red Hen chanced to notice how large the Wheat was and that the grain was ripe, so she ran about calling briskly: “Who will cut the Wheat?” 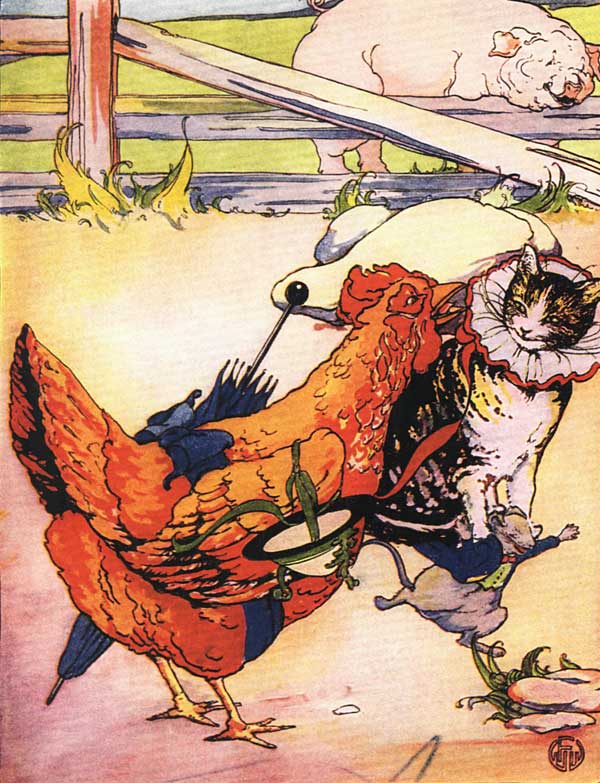 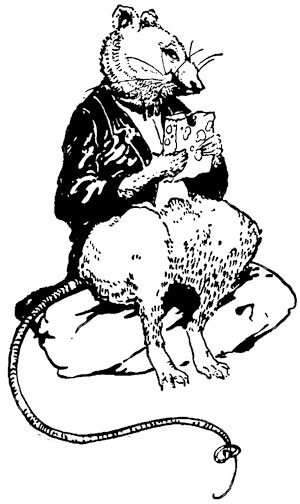 She got the sickle from among the farmer’s tools in the barn and proceeded to cut off all of the big plant of Wheat. 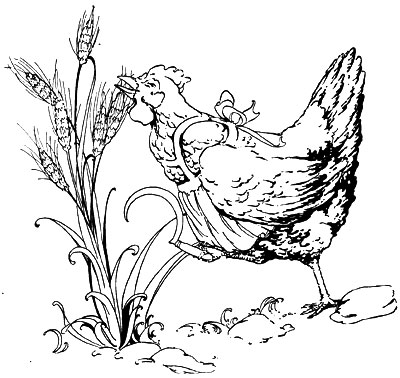 On the ground lay the nicely cut Wheat, ready to be gathered and threshed, but the newest and yellowest and downiest of Mrs. Hen’s chicks set up a “peep-peep-peeping” in their most vigorous fashion, proclaiming to the world at large, but most particularly to their mother, that she was neglecting them.

Poor Little Red Hen! She felt quite bewildered and hardly knew where to turn.

Her attention was sorely divided between her duty to her children and her duty to the Wheat, for which she felt responsible.

So, again, in a very hopeful tone, she called out, “Who will thresh the Wheat?” 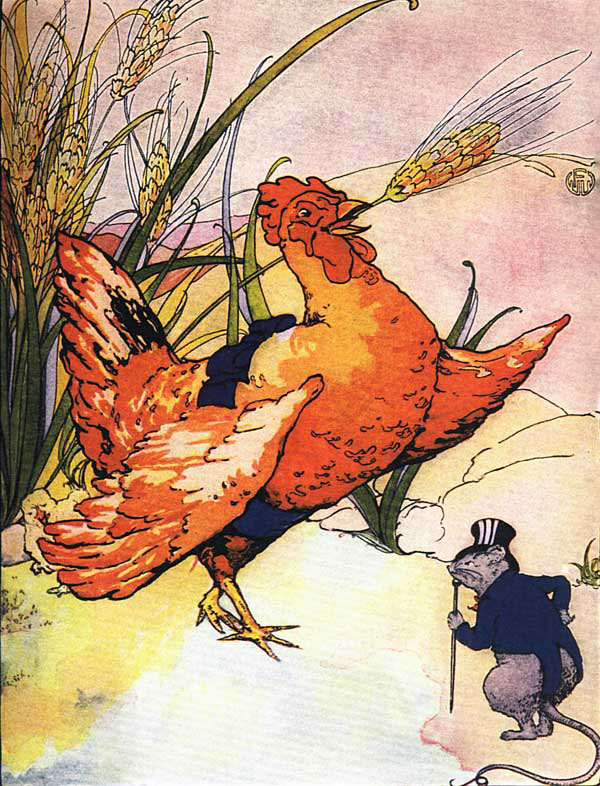 So the Little Red Hen, looking, it must be admitted, rather discouraged, said, “Well, I will, then.” 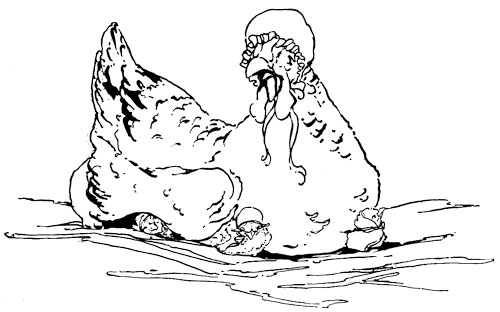 Of course, she had to feed her babies first, though, and when she had gotten them all to sleep for their afternoon nap, she went out and threshed the Wheat. Then she called out: “Who will carry the Wheat to the mill to be ground?” 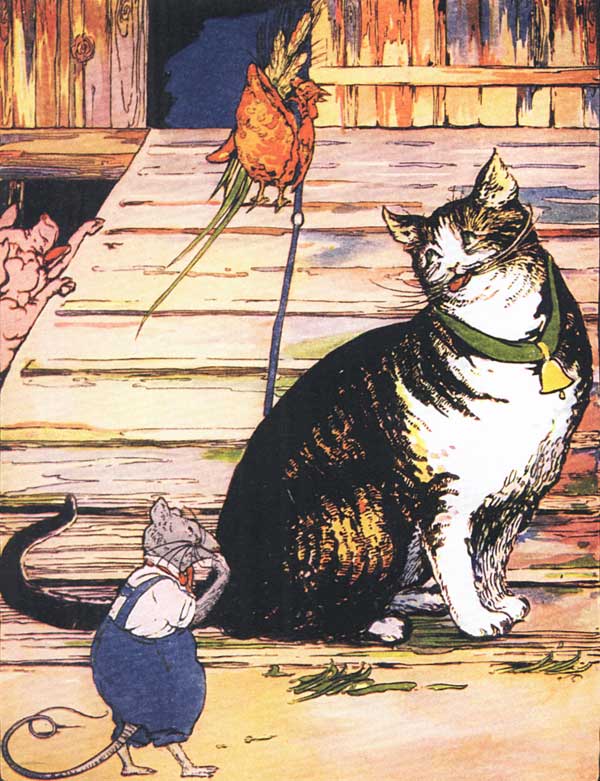 So the good Little Red Hen could do nothing but say, “I will then.” And she did. 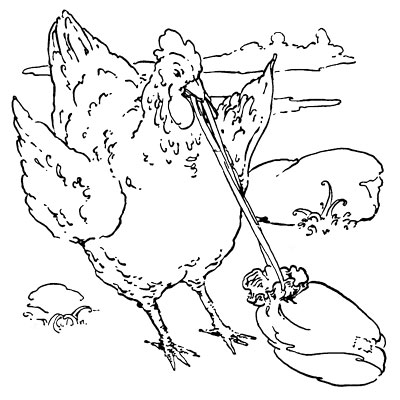 Carrying the sack of Wheat, she trudged off to the distant mill. There she ordered the Wheat ground into beautiful white flour. When the miller brought her the flour she walked slowly back all the way to her own barnyard in her own picketty-pecketty fashion. 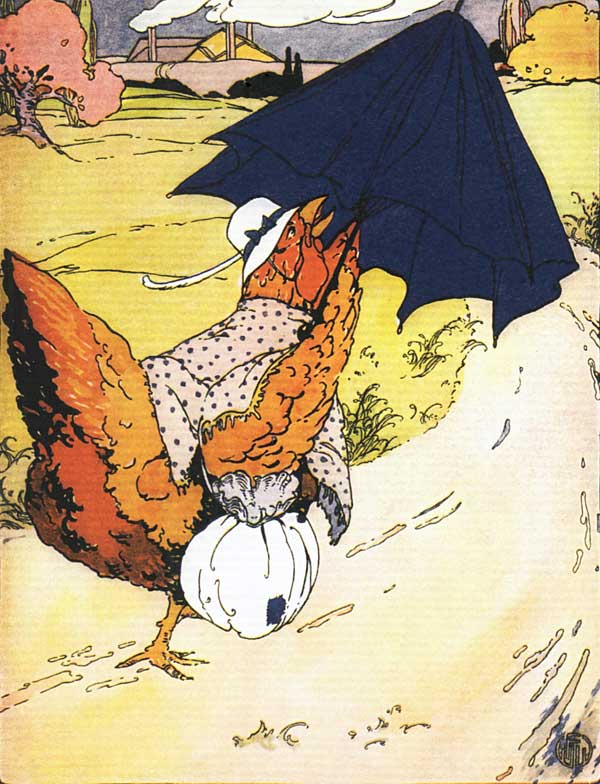 She even managed, in spite of her load, to catch a nice juicy worm now and then and had one left for the babies when she reached them. Those cunning little fluff-balls were so glad to see their mother. For the first time, they really appreciated her.

After this really strenuous day Mrs. Hen retired to her slumbers earlier than usual—indeed, before the colors came into the sky to herald the setting of the sun, her usual bedtime hour.

She would have liked to sleep late in the morning, but her chicks, joining in the morning chorus of the hen yard, drove away all hopes of such a luxury.

Even as she sleepily half opened one eye, the thought came to her that to-day that Wheat must, somehow, be made into bread. 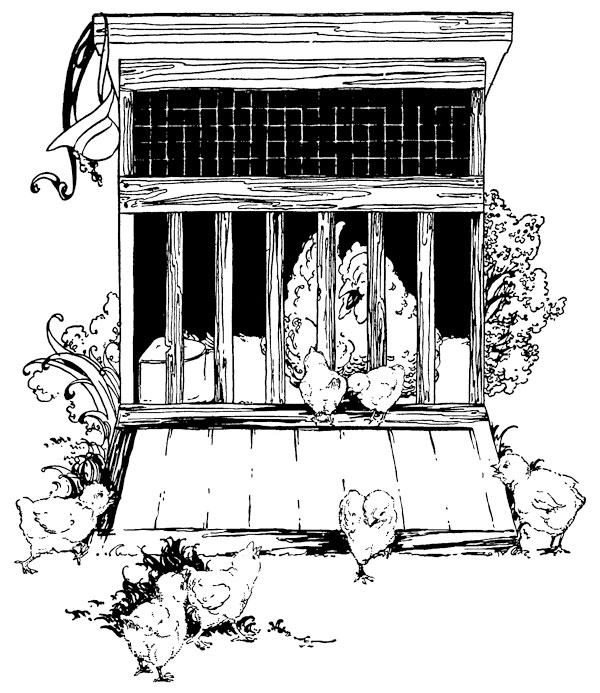 She was not in the habit of making bread, although, of course, anyone can make it if he or she follows the recipe with care, and she knew perfectly well that she could do it if necessary.

So after her children were fed and made sweet and fresh for the day, she hunted up the Pig, the Cat and the Rat.

Still confident that they would surely help her some day she sang out,

“Who will make the bread?”

Alas for the Little Red Hen! Once more her hopes were dashed! For the Pig said,

So the Little Red Hen said once more, “I will then,” and she did.

Feeling that she might have known all the time that she would have to do it all herself, she went and put on a fresh apron and spotless cook’s cap. First of all she set the dough, as was proper. When it was time she brought out the moulding board and the baking tins, moulded the bread, divided it into loaves, and put them into the oven to bake.

All the while the Cat sat lazily by, giggling and chuckling.

And close at hand the vain Rat powdered his nose and admired himself in a mirror. 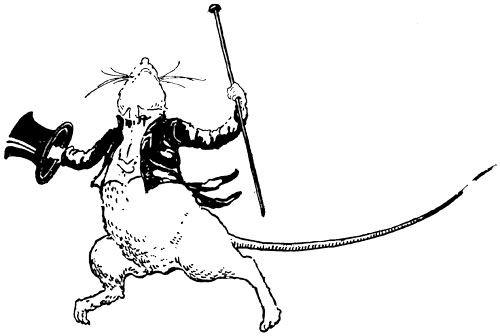 In the distance could be heard the long-drawn snores of the dozing Pig.

At last the great moment arrived. A delicious odor was wafted upon the autumn breeze. Everywhere the barnyard citizens sniffed the air with delight. 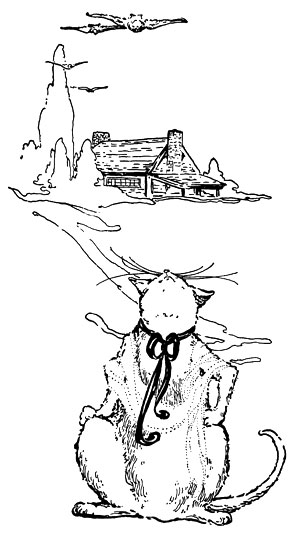 The Red Hen ambled in her picketty-pecketty way toward the source of all this excitement.

Although she appeared to be perfectly calm, in reality she could only with difficulty restrain an impulse to dance and sing, for had she not done all the work on this wonderful bread?

Small wonder that she was the most excited person in the barnyard!

She did not know whether the bread would be fit to eat, but—joy of joys!—when the lovely brown loaves came out of the oven, they were done to perfection.

Then, probably because she had acquired the habit, the Red Hen called:

“Who will eat the Bread?” 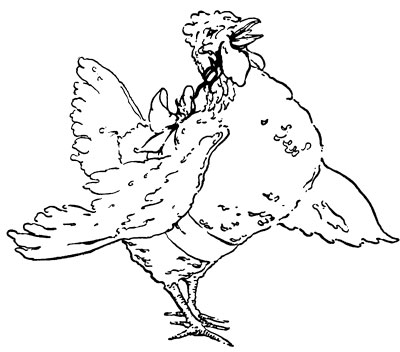 All the animals in the barnyard were watching hungrily and smacking their lips in anticipation, and the Pig said, “I will,” 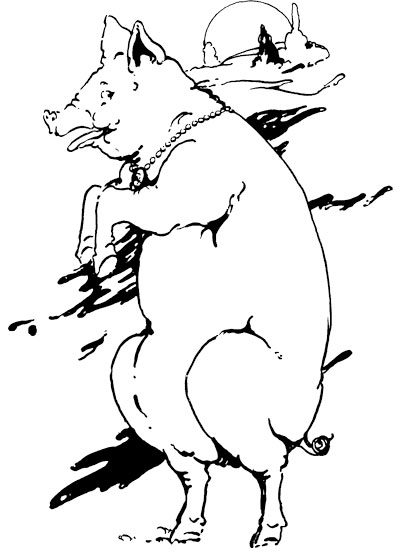 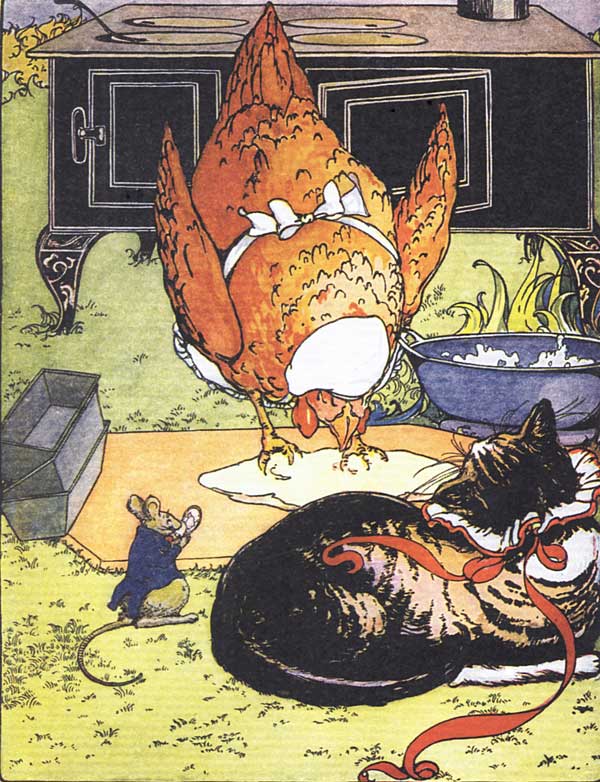 But the Little Red Hen said, 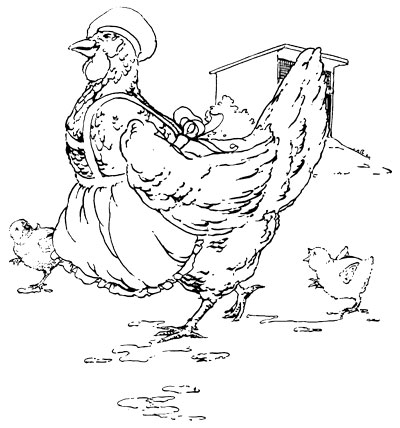 1. Little Red Hen decided that she would grow wheat to make some bread, but nobody would help her do it. Do you think she should have given up when nobody helped her?

2. Once Little Red Hen had decided to make the bread by herself, she had to manage doing it and looking after her baby chicks at the same time. Was she prepared to do this? How?

3. The Rat, the Cat and the Pig didn’t want to help the Little Red Hen prepare the bread. What was the result of their actions?

5. In what was would it have been better if the Rat, the Cat and the Pig had helped the Little Red Hen to make her bread?

Whose Button Is This?

That’s not Thabi! That’s a Hippopotamus!