Fair Janet was the daughter of the Earl of March, and she was so beautiful that many knights and noble gentlemen had asked her to marry them, but she would say yes to none of them.

One day she sat at her window sewing a seam, and she heard the sound of a horn down in the forest. It blew so sweet and it blew so clear that she laid down her seam to listen, and it seemed to her that it called “Janet, fair Janet, come hither!”

Fair Janet dropped her sewing and down to the wood she ran. She looked about her, and there stood a handsome knight. From head to foot he was dressed in green, and in his hand he held a silver horn, and when he saw her he raised it to his lips and blew again so soft and clear that Janet had never heard anything like it.

“Now tell me,” said she, “is that a fairy horn that it blows so sweet a note?”

“It is indeed a fairy horn,” answered the stranger, “and it was in Fairyland that I learned to wind it. In many a forest have I blown it, north and south, and east and west, and you are the first to hear and answer it.”

Then fair Janet was afraid, for she thought the stranger must be a fairy knight, and she did not know what charm he might cast about her.

The knight saw she was frightened, so he said, “From Fairyland I brought it, yet I am of human flesh and blood like you. I am the son of the Earl of Murray, and once my name was John, though in Fairyland they call me Tamlane. When I was a child, the fairies stole me, and they have kept me with them ever since. Bright and fair it is in Fairyland, and I am the Queen’s favoured knight, but my heart wearies to be back in my own country and living with my own kind once more.”

“And will not the fairies let you go?” asked fair Janet, and now she was not afraid.

“That they will not of their own wills, and only a lady brave and true can set me free. You yourself are that lady, fair Janet, for you alone have heard and answered my horn.”

Then Janet promised she would do whatever Tamlane bade her do, if by so doing she might bring him back from Fairyland, for he was very good to look upon. She let him put a ring upon her finger, and they kissed each other as a sign that they were betrothed.

Then Tamlane told her what she must do. On every Hallowe’en at midnight the fairies ride abroad, and on that night she must go to Milescross and wait for them to pass. At midnight they would come.

First would ride the Fairy Queen, her horse hung round with bells. After her would come all her ladies and esquires, and then her band of knights, and it was among these that Tamlane would ride.

“You’ll know me from among them all,” said he, “by the snow-white horse I ride. Moreover, I’ll wear a glove on my right hand, but my left hand will hang bare. Then is the time for you, Janet. Spring up and pull me from my horse and hold me tight. There will be a loud cry raised, and they’ll change me into many shapes in your arms, but hold me tight, whatever I seem to be. Always it will be I, and I will not harm you. Do this, and when I take my own shape again I will be free of the fairies for ever.”

Janet promised to do all that he told her to, though she was terrified at the thought of what might happen, and then they kissed each other again and parted.

Now three nights after it was Hallowe’en, and Janet went out to Milescross, and hid herself there and waited.

When midnight came there was a sound of bells, and a white light, and the fairies came riding by. First came the Queen, and she was very beautiful, with a circlet of stars about her head. Then came her ladies and squires, talking and laughing together; and next a troop of knights all in green, and each with a silver horn. Some rode on black horses, and some on brown, but one knight there was who rode a milk-white steed. His right hand was gloved, but his left hand hung down bare at his side. He rode on and never turned his head, but when Janet saw him she knew him for her true love, Tamlane, and she sprang forward and caught him by the mantle and pulled him down from off his horse and gripped him tight. Then from all the fairy train there arose a cry, “Tamlane’s awa’!” “Tamlane’s awa’!” 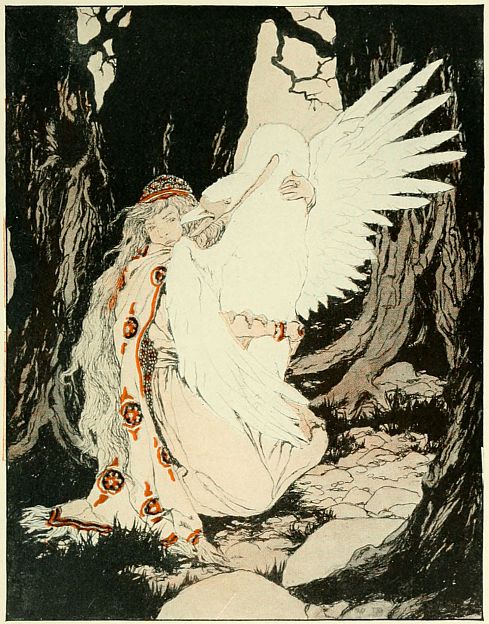 Suddenly it was no knight that Janet held in her arms, but a great grey wolf. It struggled and snapped, and its breath was hot in her face. Almost it broke from her, but she remembered Tamlane’s words and held it tight. And then it was not a wolf she held, but a bale of burning straw. The flames roared in her ears, but she clasped it close, and it did not scorch her. Then it was a great serpent that wrapped itself about her, and tried to slip from her arms, but she held it tight and did not let it go. Then it was a swan that beat its wings in her face, but she shut her eyes and held it. Then the wings were still, and she opened her eyes, and saw it was her own true love, Tamlane, that she clasped in her arms.

Then suddenly the fairies were gone, and Tamlane and Janet stood there alone. He took her by the hand, and they went back to her father’s castle together. There they were married with great joy and feasting, and they lived together happily all the rest of their lives, a faithful and loving man and wife.

Header illustration from Pixabay, with thanks

2. What do you think this shows about Janet?

3. Janet trusts Tamlane enough to risk her life for him. Why do you think we often trust the ones we love?

I Wandered Lonely As A Cloud