Farmer Boggins lived on a lonely farm, and there were a great many pixies and other fairies all around.

One morning in threshing-time Farmer Boggins went out to the barn before anyone else, and what was his surprise to find that a great heap of grain had been threshed out in the night. He wondered who had done it. When his labourers came to work he questioned them, but none of them knew anything about it.

The next night the same thing happened; no one went near the barn, but in the morning there was a heap of clean grain on the floor.

The third night the farmer made up his mind to find out who it was that was helping him, so he hid himself behind some hay, and lay there watching. The moon shone in and lighted all the floor, but for a long time the farmer heard and saw nothing.

Then suddenly he heard a sound of threshing, and there was a pixie beating out the grain with a flail. The little man was not a foot high. He was as brown as a nut and had scarce a rag of clothes upon him.

He worked so hard that the sweat poured down his forehead, and now and then he stopped to wipe it away. Then he would cry out proudly, “How I sweat! How I sweat!”

The farmer was filled with admiration, and the third time the little man cried “How I sweat!” the farmer could hold his tongue no longer, but answered him, “That you do!”

No sooner had he spoken, however, than the pixie was gone.

The farmer waited for a while, but the little man did not return. At last Farmer Boggins went back to the house and told his good wife all that had happened.

“You stupid!” she cried, when he had made an end of the story. “You should never have spoken to him. The small folk cannot bear to be spoken to!”

Well, the mischief was done, and now the only thing to do was to think of some way to coax the pixie back again to the work.

Early the next morning the good wife woke her husband.

“Husband,” said she, “did you say the little man had scarce a stitch of clothes upon him?”

“That’s what I said,” answered the farmer.

“Then listen,” said his wife. “To-day I will make a little suit of clothes for him, and you shall take it out and lay it in the barn where he will be likely to see it if he comes back. Maybe then he’ll be so pleased he’ll get over his anger and begin to work for you again.” 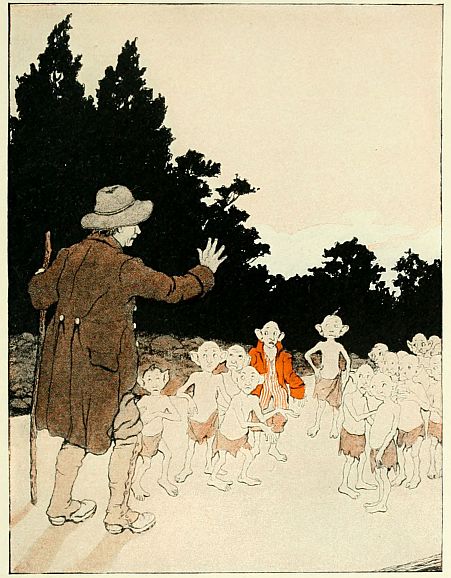 Well, that seemed a good plan to the farmer, so his wife set to work, and by evening she had made a complete set of little clothes just the size for a pixie. The farmer took it out to the barn and spread it out in the moonlight and hid himself where he could watch and see what would happen.

For a long time all was still, and Farmer Boggins was beginning to feel sleepy, when suddenly he saw the pixie was there. The little man had a flail in his hands and was going toward a heap of grain. Then he saw the little suit lying there in the moonlight. At first he stood quite still, and then he laid down the flail and took up the clothes. He looked at them all over, and then he put them on.

When he was dressed he began to hop about and sing:

So singing, he danced across the floor and out of the barn and down the hill.

Then the farmer was in a rage. His wife had taken all the trouble to make the clothes, and the little man had taken them and gone off without doing a stroke of work to pay for them. But this should not be the end of the matter.

At the foot of the hill the farm road crossed a stream, and there was a bridge. The farmer went down to the bridge and hid himself beside it, for he thought that if the pixie were really leaving the farm, this was the way he would go.

Sure enough, Boggins had not been hidden there long when he heard a sound of voices, and along came a whole troop of pixies. They all looked exactly like the little man the farmer had seen in the barn, but none of them were dressed. Last of all came a pixie in a little suit of clothes, so the farmer knew he must be the one who had threshed out the grain.

Just as this pixie reached the bridge, Farmer Boggins stepped out in front of him. “Not so fast, my fine little fellow,” he said. “There’s some work owing me in payment for that suit you’re wearing.”

The farmer had scarcely got the words out of his mouth when he heard a great splash in the stream behind him, and a voice that sounded like his wife’s cried, “Husband! Husband! Come quick and help me, or I’ll drown.”

The farmer turned about, and immediately there was a burst of elfin laughter. The stream lay silent and smooth in the moonlight. No one was there, and when the farmer turned back to the bridge again every pixie was gone from it.

Then the farmer knew that he had been tricked, and he had to go home without either the pixie or the suit of clothes. His wife was there though. She had never been out of the house at all, and a fine scolding she gave him for letting himself be tricked that way by the little men.

But the pixie never came back to help him with his grain, or to thank him for the suit of clothes either.

Header illustration from Pixabay, with thanks

1. Do you think that the farmer was entitled to the pixie’s help around the house after he had given him the gift of clothes? Why or why not?

The Tale of Two Bad Mice

There’s An Alien In My House!