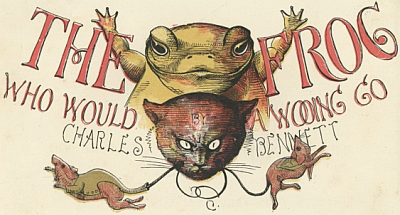 A Frog he would a-wooing go,
Whether his mother would let him or no. 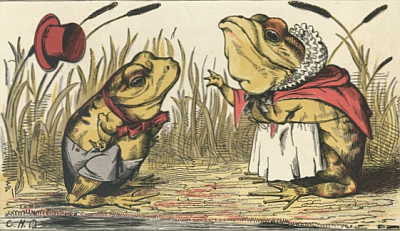 Off he set with his opera-hat.
On the road he met with a Rat. 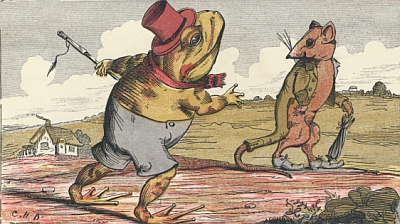 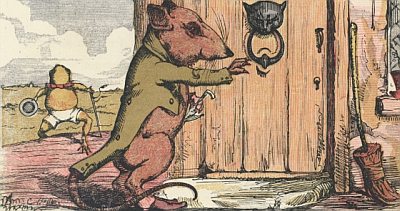 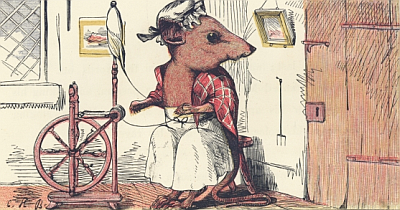 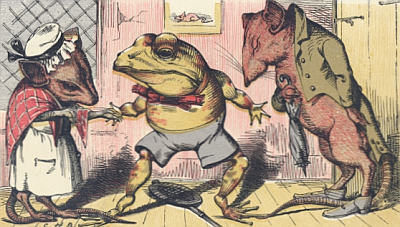 “Pray, Mrs. Mouse, now give us some beer,
That Froggy and I may have good cheer.” 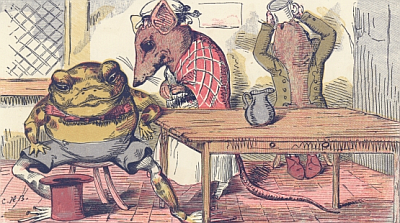 “Pray, Mr. Frog, will you give us a song?
Let the subject be something that’s not very long.” 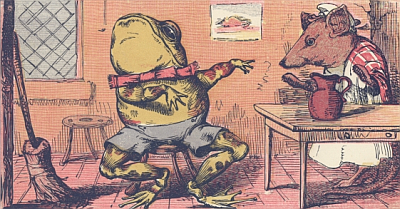 “Indeed, Mrs. Mouse,” replied the Frog,
“A cold has made me as hoarse as a hog.” 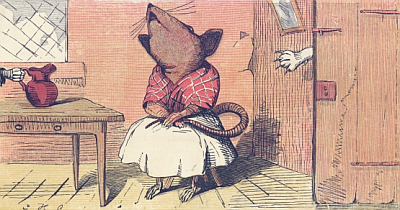 “Since you have caught cold, Mr. Frog,” Mousey said,
“I’ll sing you a song that I have just made.” 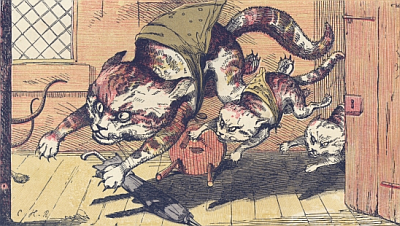 As they were in glee and merrymaking,
A Cat and her kittens came tumbling in. 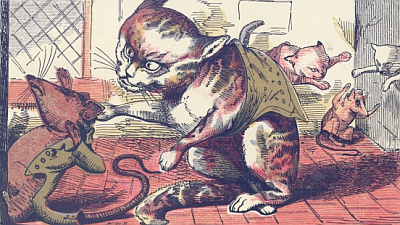 The Cat she seized the Rat by the crown,
The kittens they pulled the little Mouse down. 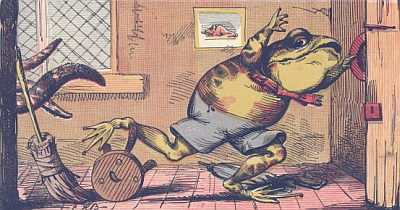 This put Mr. Frog in a terrible fright,
He took up his hat, and he wished them good night. 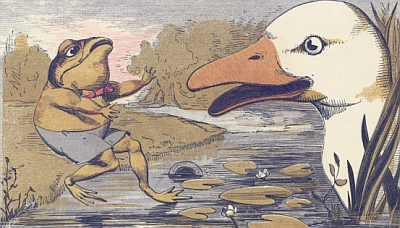 As Froggy was crossing it over a brook,
A lilywhite Duck came and gobbled him up. 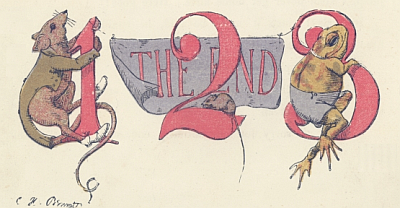 So here is an end of one, two, three—
The Rat, the Mouse, and little Froggy. 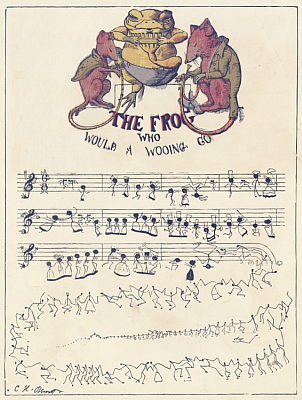 On the quiet sedgy bank of a stagnant pool, and under the shadow of rank reeds and bulrushes, sat two frogs. They had retired from the shoal, who were disporting themselves in the water, and were earnestly talking. The elder of the two, an old matron, addressing the younger, who, by-the-by, was her son, said,—

“My dear Froggy, you had better stop quietly with me; you do not know what dangers you may encounter, if you leave your secluded home.”

“Ah, my son!” continued the old lady, “I see that, like most young frogs, you are very obstinate, and will not listen to reason. But why on earth you should wish to go gadding after a poor, hungry little mouse, is more than I can tell—you with your beautiful legs and speckled coat, born to a splendid estate of reeds and water, the heir of nine bulrushes and a water-lily. I thought you were more of a frog.”

“Have you thought of the boys who throw stones?”

“Or the birds with long beaks?”

“If you want to go a-wooing, there are frogs in your own station in life; indeed, with your personal appearance, you might even aspire to an eft or a lizard.”

“You are no better than a tadpole!” said his mother, getting very angry at last; and no sooner were the words out of her lips, than up jumped Master Froggy in a passion, and taking his opera-hat under his arm, off he went at a rapid pace, singing at the top of his voice, so as to hide his rage,—

Froggy had not walked very far before he saw, jogging on before him, a brown little fellow in a long-tail coat and Blucher boots, who carried an old cotton umbrella.

“Dear me,” thought the Frog, “that looks like my friend Mr. Rat;” and sure enough so it was.

“How do you do?” asked Master Froggy, when he had overtaken him.

“I’m going,” said Froggy, “to see the pretty little Widow Mousey, who lives in that snug cottage yonder. Pray come with me, for I feel rather bashful at going by myself.”

“With all my heart,” replied Mr. Rat; and off they went together.

They soon arrived at the cottage; and the Rat having given a loud knock, while the Frog gave a loud “Croak,” Mrs. Mousey put away her spinning-wheel in a great hurry, and admitted her guests.

“Good morning, Mrs. Mouse,” said the Frog. “We were out walking, and thought we would give you a call.”

“You are very kind, I am sure,” replied Mrs. Mousey. “Pray sit down and rest yourselves; I dare say you are tired.”

“Croak—let’s enjoy ourselves while we can,” observed the Frog.

“Certainly,” said Mousey. “I’ll draw you some of the last brew.”

So Mousey drew some beer, and they sat down very cosily; and soon were chatting so comfortably, that Master Froggy thought he should soon get rid of his bashfulness, and then should be able to ask pretty Mrs. Mousey to marry him. Presently their little hostess proposed a song, and called upon Froggy to oblige; but, “Really,” he replied, “I must be excused, for the fog last night gave me such a cold that I’m as hoarse as a hog.” He didn’t forget that he had been singing “Rowley, powley,” as he came along, but he was afraid that his voice was not good enough for his company.

So she sang a pretty little song she had just composed, and a very charming ditty it was—rather shrill, perhaps, but very well sung indeed. After this, I need hardly tell you that they enjoyed themselves amazingly. Perhaps Mr. Rat drank rather too much beer; but altogether it was a very pleasant little party, and Froggy had so far got over his bashfulness as to squeeze Mrs. Mousey’s paw once or twice rather tenderly.

But while they were thus happily employed, a terrible old cat who lived in the neighbourhood, and went by the name of “Browzer,” was tying on her shawl—calling to her kittens, and saying,

“Come, my children, it is a fine day—let us go for a walk. Make haste, for something tells me we shall find some dinner on our way.”

And sure enough they did; for after looking after little birds, and trying the windows of all the pantries they knew,—

“B-row!” said the Cat, snuffing the air; “do you know—I’m not quite certain—but—yes, really—I smell mouse.”

“Oh, come along!” said the kittens.

Slowly and cautiously they crept on towards Mrs. Mousey’s cottage, till at an unexpected moment, and just as Mrs. Mouse was going to get a fresh mug of beer, in tumbled the Cat and her kittens. Down went the Rat under the Cat’s paw—up in a corner the two kittens got the Mouse.

“Holla!” says the Frog; “this won’t do! Perhaps they’ll be after me in a minute. I must be off home to my mother.” And sure enough off he went (trembling like a leaf), but as rapidly as he could. “Oh, why did I ever leave home?” said this foolish Frog: “I should have been safe enough with my mother. I’ll never leave home again. Never! never! never!”

“Quack, quack!” observed a Duck who had been watching him.

“Oh, my goodness gracious!” said the Frog; “what shall I do now? There’s the very Duck that ate up my uncle who went abroad! Now, if I can’t cross over this brook in a single jump, I shall never get home alive. Here goes!”

But, alas! since it must be told, he could not cross the brook in one jump.

In he fell—splash! Up came the Duck.

We are all sorry for his untimely end, and wish that the Duck had not gobbled him up: but we must not forget that if he had been less self-willed and obstinate, if he had only paid attention to what his mother told him, he might have been safe at home—perhaps, in due course, married to an amiable Frog, and the father of a large family of innocent little tadpoles.

VINTAGE POEM AND STORY FOR KIDS WRITTEN AND ILLUSTRATED BY CHARLES H. BENNETT

LET’S CHAT ABOUT THE POEM~ IDEAS FOR TALKING WITH KIDS

1. The little Frog said he was going to go out whether his Mother agreed or not. Do you think it would have been a good idea to listen to his Mother? Why or why not?