You can listen to an audio reading of the story by clicking on the arrow above !

It was Rosco’s first Christmas with the McKendrick family. Late in the evening on Christmas Eve, ten-year old James, seven-year-old Mandy, and Mom and Dad McKendrick were all in bed.

Rosco, their large German shepherd, lay near the front door, tossing and turning on his doggie bed. The lights on the Christmas tree had been shut off. The fire in the hearth had burned out. But Rosco was wide awake.

Rosco lay thinking anxiously about what Mandy had told him—that tonight, someone named Santa Claus would be visiting the house while everyone slept. Mandy had instructed her dog not to bark at Santa, because she wouldn’t want Rosco to scare Santa away.

She had told him what to expect. So Rosco was prepared for a jolly old man with a white beard and a red suit to come hurling down the chimney sometime after midnight.

What time is it now? Rosco wondered. And when will he get here? Rosco knew only one thing for sure—that he would be tired tomorrow after all the sleep he would miss tonight.

Rosco tried to relax and think about something else. His mind wandered as he remembered the many pleasant things this December had brought—a Christmas parade with floats, marching bands, and holiday carolers; Mandy’s school play; James’s trip to the ice-skating rink with friends, sugar cookies in the oven; and festive decorations all around the house.

Rosco had even gone on a horse-drawn sleigh ride with the whole family—well, more of a horse-drawn wagon ride really, but Mrs. McKendrick had called it a sleigh-ride. The ride had taken place at a farm in the countryside, on a chilly, dark evening.

The family had donned mittens and hats and sipped hot cocoa as the horses whisked them through beautiful fields and woods lit up by rows and rows of colorful Christmas lights. The horses wore jingling bells around their necks that made them sound just like the horse in Mandy’s favorite Christmas song. Rosco had loved it!

Yes, December was a magical month in the world of his people. Rosco decided he, too, liked this festive holiday season as much as they did. So he thought maybe he ought to calm down and go to sleep—it was time to stop wondering when Santa would arrive.

He looked out a nearby window. Tonight the air outside was cool and damp, but no snow lay on the ground. Earlier today it had rained, and puddles had collected on the ground. Rosco knew this kind of weather usually brought frost by morning, and often puddles turned into very slippery patches of ice. He’d have to be careful tomorrow morning when they put him outside.

Through the window Rosco could see the red and green crystals of sugar that James and Mandy had left on the driveway before they went to bed. The kids had made an odd mixture of uncooked oatmeal, birdseed, and colored sugar crystals, and then sprinkled the mixture outside the front door. Reindeer food, they called it. It was a snack for Santa’s reindeer.

The colorful crystals of sugar outside glittered under the strings of Christmas lights encircling the house. Rosco wasn’t sure if reindeer would eat birdseed but he would be happy to lick it up tomorrow if they didn’t.

Oh well, nothing else to do now but wait, he thought with a sigh, a wide yawn finally escaping his mouth. The tired dog snuggled into his soft bed and soon drifted off into a peaceful sleep.

Hours later, Rosco awoke with a jolt to the sound of footsteps on the roof. He remembered Mandy’s desperate instructions, because she knew he could make mischief sometimes: “Please, please don’t bark when you hear him, Rosco! It’s really important!” Mandy had said. “Santa doesn’t want you to notice him when he’s working. You might even want to pretend you’re asleep.”

So Rosco obediently clamped his mouth shut, holding back the bark that usually came out when he heard a noise. But he just had to find out what was happening up there on the roof. He just had to be sure it was, indeed, Santa Claus. He could not just pretend to be asleep. Sorry Mandy, he thought.

Quietly, he padded over to his doggie door at the back of the house. He passed the Christmas tree, the plate of cookies and carrots, and the glass of milk that the kids had left for Santa in the living room, not daring to touch the food after Mandy’s warning.

Rosco slipped through the doggie door out into the frosty night. He’d have a good view of whomever was on the roof from the far edge of the backyard, if he could only get there without being seen. He didn’t want to scare away Santa.

Soon he made it to the edge of the yard, and turned to look up at the McKendrick house. There, a large, beautiful, red sleigh sat balanced over the tip of the roof. It seemed to have appeared out of nowhere. Wow! He was impressed. Now, that’s what you call a sleigh, Mom, he thought. But no one was up there—no jolly old man in a red suit, not even one reindeer—just the sleigh.

But this had to mean Santa Claus was here! So, where was he? And where were the reindeer?

Rosco thought maybe he could get a better view from the other side, on the street—so he crept quietly back across the damp lawn and out toward the driveway. Maybe I’ll get a lick of that reindeer food while I’m out there, he thought. Like most big dogs, Rosco was always hungry for a snack.

Once again he was in for a surprise. Not only were no reindeer on the other side of the house, but the reindeer food on the driveway was all gone! Not one red or green sugar crystal was left to sparkle in the night. The reindeer must’ve already eaten it up! But, how had they eaten it so quickly without being noticed? And where were they now?

He walked out onto the street in the dark night and sniffed about, carefully searching for traces of the nine reindeer. They couldn’t have gotten far, could they? Although, Mandy said they can fly, right?

Just then Rosco heard a loud clunk on the rooftop, followed by some jingling bells, like the sound that the horses had made on the wagon ride. He heard an animal whinny and stomp its hoof. He thought he saw the tips of antlers moving about on the other side of the roof.

He could not miss his chance to see those reindeer! He started to run, heading across the driveway and toward the backyard.

But he had not looked closely at where he was going and it was dark out! His paws hit a long, wide, frozen puddle on the pavement.

Rosco sailed across the ice, slipping and sliding until he smacked the cold, hard, dry pavement at the other end of the frozen puddle with the full force of his body.

Ouch! That hurt, he thought, sprawled out on the ground, resting his aching legs. I should’ve seen that coming. But maybe there was still time to see Santa and his reindeer if he hurried. I’d better be more careful, though. He scrambled to his feet.

In the backyard, everything was silent again—not a reindeer in sight. He looked to the roof. The sleigh was gone! How had it disappeared like that? he thought. It was just there a few moments ago! Rosco sighed heavily.

Defeated, he lowered his head and shuffled slowly back to his doggie door. Rosco was fast and strong and smart. He was usually very good at sniffing out and finding whatever he was after. So how had Santa Claus and nine full-sized reindeer managed to get by him?

He slipped inside the house to return to his doggie bed, pondering the question, his tail sagging in disappointment. Oh well, maybe next year, he thought sadly.

But as he crossed the living room, he stopped and gasped. Colorful presents now surrounded the family’s Christmas tree, and they were piled high! Big ones and little ones, some wrapped in patterned paper with shiny ribbons, some not wrapped at all!

The glass of milk was empty and the cookies and carrots were gone! Only crumbs remained.

Santa must’ve been here, inside the house! He must’ve delivered all of these gifts and swept out through the chimney just like Mandy said he would, in just a few minutes, flat!

Magic! It must be Christmas magic, Rosco thought. That’s how he does it! That’s why I never really saw the reindeer!

And oh, my! James and Mandy will be delighted when they see this in the morning! Rosco stood gazing at the extraordinary sight for a long time.

Finally, he sighed and headed for his doggie bed. Settling in, he smiled a doggie smile of satisfaction. Next year I’ll know what to do.

Merry Christmas from Rosco the Rascal! 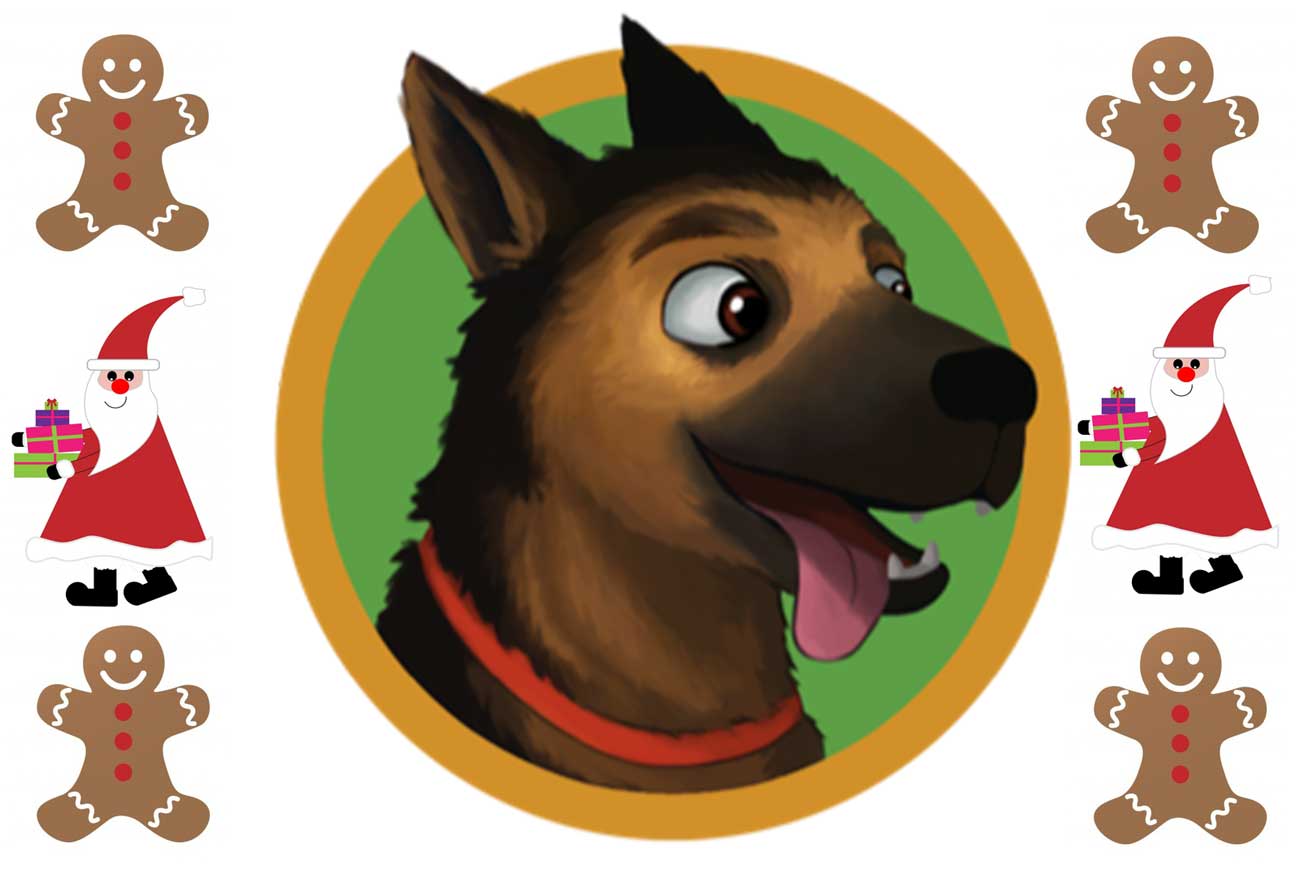 Bottom illustration by Josh Addessi and Victoria March, with elements from Kaz at Pixabay.

1. Have you ever thought you saw Santa just before Christmas? What happened?

1. Rosco doesn’t get to see Santa this year. But he manages to see the positive side. What reasons does he have to be happy when he settles down to sleep that night?

What’s At The Park?